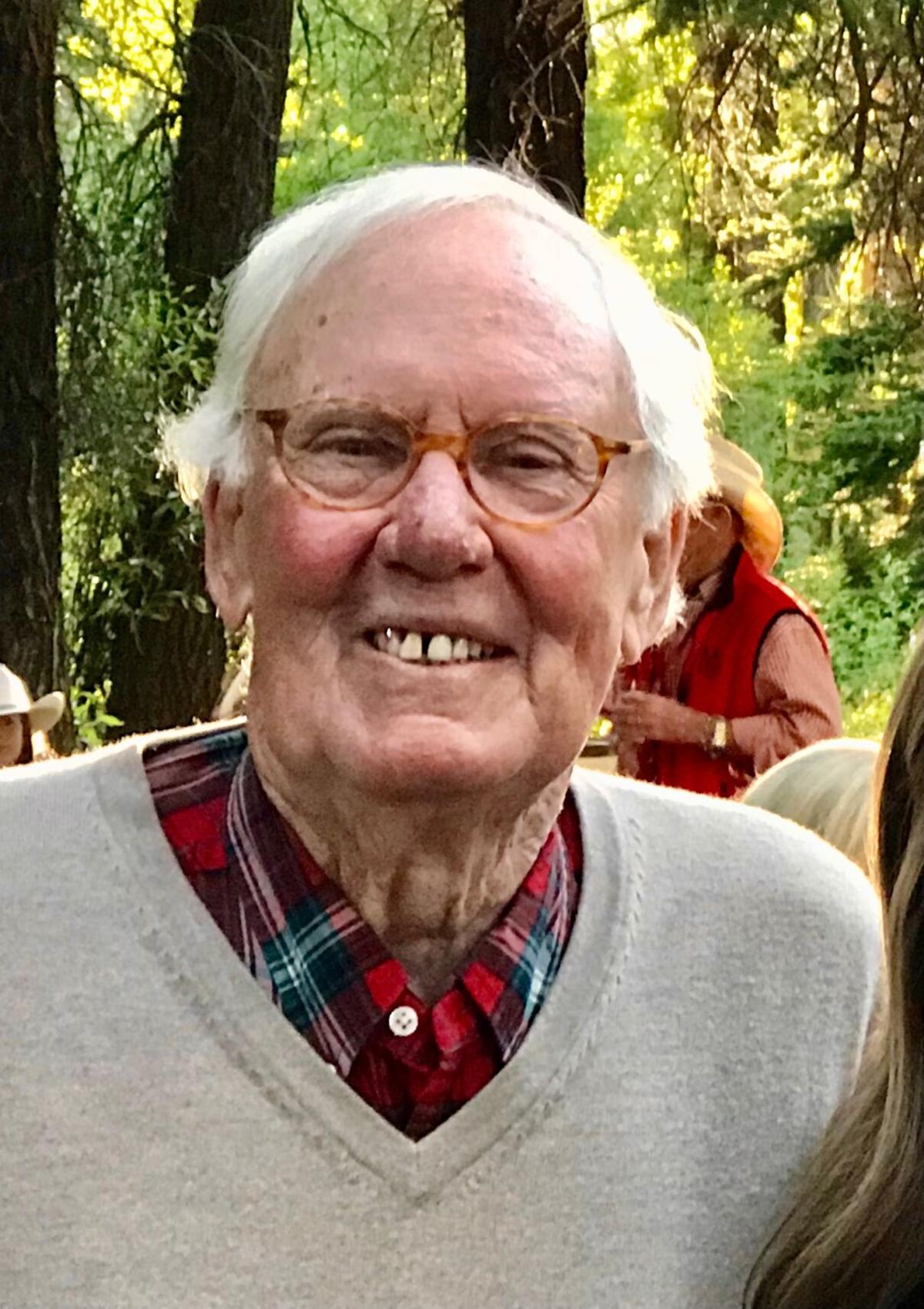 Gaillard Dotterer, a Charleston native who lived on Wadmalaw Island, was known for his love of the Lowcountry wilds. Provided 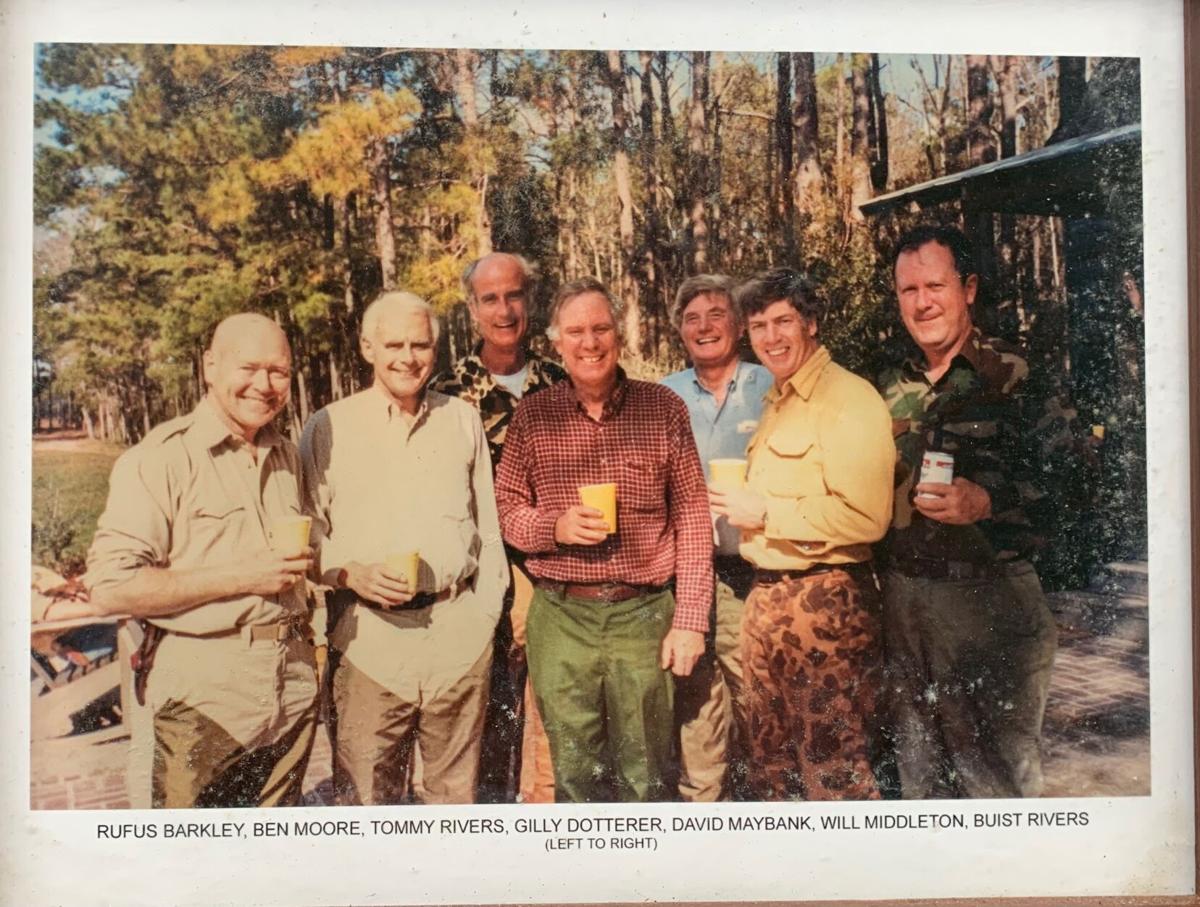 Gaillard Dotter (center) was a member of a group of seven outdoors enthusiast friends who called themselves The Sportsmen. Johnny Maybank/Provided

Gaillard Townsend Dotterer, a longtime resident of Wadmalaw Island, has died at the age of 84 after being diagnosed with cancer two years ago.

Known by all as Gilly, the upbeat, singular Charleston native enjoyed an eclectic career that spanned numerous corporate corridors, as well as South Carolina's coastal waterways. It was punctuated by interludes as both a stockbroker and a shrimp boat captain.

Johnny Maybank, whose father, David Maybank, was a close friend and neighbor, recalled Dotterer as a man with a quality that compelled others to gravitate toward him wherever he was.

"When I think of Uncle Gilly, I just think of a very easygoing guy that took the moments of life as they came at him," Maybank said. He would often spot Dotterer and his wife Barbara in a boat passing by his dock setting off to fish.

"He really was in nature and he enjoyed everything."

Born in Charleston on Feb. 14, 1937, to Edwin Gaillard Dotterer and Mary Leslie Townsend Dotterer, he spent time at The Gaud School and The Episcopal High School before graduating from Charleston High School and attending Clemson University. He served in the U.S. Army, stationed in Germany, and was later recalled to a reserve unit at Fort Eustis, Va., during the Berlin Wall Crisis, duty that extended to the Cuban Missile Crisis.

Landing in the corporate world, he started out as a stockbroker at Johnson Lane. But, according to John Hope, his friend of 75 years, he did not take to the constraints of the office.

He found a better fit in the insurance industry, working for companies like Prudential and Colonial Life. Most recently, he worked alongside his son, also called Gilly, to establish Dotterer Insurance, an independent insurance agency.

"He loved to help people," Hope said, adding that over the course of his career he engaged with thousands of people.

But he shaped his life around the wilds and waters of Wadmalaw and its Rockville community, which had been in his blood for three centuries.

His Brigger Hill Road home was on property held by the Townsend line of his family since 1718, when it was deeded by the king to Daniel Townsend. According to Dotterer’s son Moultrie, that same ancestor also served on the jury for the pirate Stede Bonnet.

Dotterer's passion for the outdoors began during his childhood in downtown Charleston, catching speckled trout in Charleston Harbor and spending summers navigating the wetlands around Rockville.

Jackie Lucas, who has been a friend for close to 80 years, first met him when Dotterer lived nearby on Council Street. He would join him on Wadmalaw to fish, hunt and sail. By their teen years, they were also getting up to whatever mischief was on offer.

“We did a lot of crazy things,” Lucas said, recalling Dotterer's perennial appeal to all who met him.

He was also known to frequently join forces with seven fellow outdoors enthusiasts who called themselves The Sportsmen and would regularly gather for such sport at David Maybank's Lavington Plantation.

He held posts as commodore of the Carolina Yacht Club and the Sea Island Yacht Club, and for the latter captained its sailboat, the Undine, in regional regattas. He also embraced ocean racing as part of the Southern Ocean Racing Conference.

"He was most comfortable when he was out on the water," said Johnny Maybank, with Botany Bay, Deveaux Bank and Rockville particular favorites.

The pull of the water was so powerful it prompted a career pivot in the 1970s. Casting off his prestigious job as a stockbroker at Johnson Lane, he instead decided to purchase a boat and become a shrimper.

For others, Dotterer was a de facto ambassador for the region’s singular terrain.

According to Burnam Eubank, when her father Manly Eubank was a newcomer to town and they were invited to dinner, they came to expect to eat fish caught from the river, tomatoes from the garden and whatever greens were growing for salad.

According to Hope, anything he shot or caught ended up on the table.

By many accounts, the quick-witted, spirited and caring Dotterer was deeply reverent — of his God, the natural world, his family and his friendships with those from all walks of life. But he was joyously irreverent, too, ever the rascal with his exploits.

There were his regatta escapades. He would take the lead, pulling up his centerboard just in time to glide over the oyster banks he knew were under the water, then watch the competition in his wake, hopelessly marooned.

Hope recalled how the two loved to play such games with people, some not so serious and others more so, as a way to get their attention. There were also plenty of antic times fishing on "Cloud Nine," a rumrunner Dotterer had purchased with a friend.

Misadventures withstanding, he was perennially likable.

“Everybody liked him. He was very popular,” Lucas said, noting he always had everyone laughing around him.

His tales played out in a unique Lowcountry voice that, according to Maybank, "made every story seem like it was from another place in time."

But tales or no, Dotterer drew people to him. "He was a man who could walk into a room and, without a single word, own that room," Hope said.

Around three decades ago, he made another shift, overcoming a struggle with addiction that would inform the rest of his days. He then oversaw AA meetings at Rockville Presbyterian Church, committed to buoying others who encountered the same battle.

And he remained close to his Wadmalaw home with his beloved wife Barbara, forever instilling a love of its singular terrain and waterways in his children, grandchildren, their friends and many others.

"He was the most wonderful man I have ever met and I have met many wonderful people," Hope said.

His friend, he observed, was the last of the seven Sportsmen to die. He surmised they were all now gathered in Heaven, where he they would no doubt meet with God, who created the land they so loved, to advise him on how to conserve it.

Dotterer's funeral service is planned for May 10 at Grace Episcopal Church on 98 Wentworth St. A private burial will follow at Johns Island Presbyterian Church.