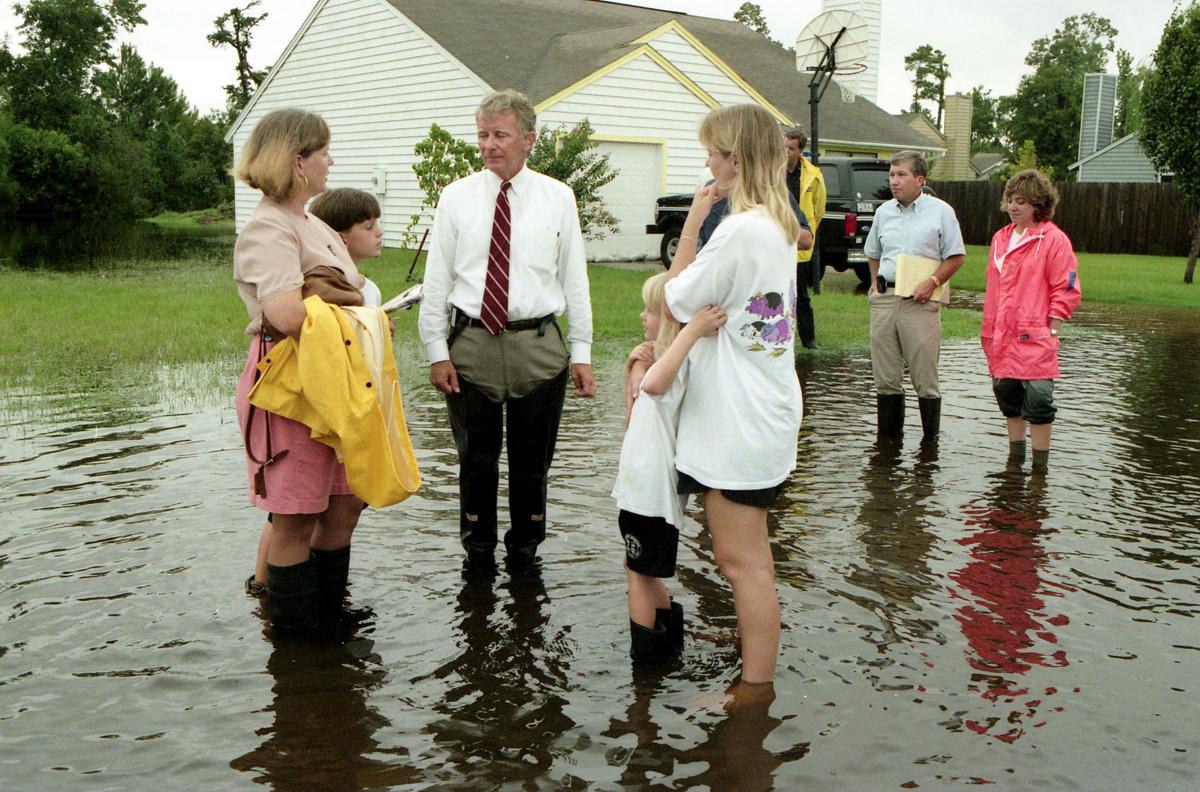 Mayor Joe Riley speaks to Willow Walk subdivision residents on Monday, August 28, 1995. The Shoreham Road residents — Jennifer Prentiss (left) and her son Jamie Preston along with Mary Sires (right) and her son Eric — speak with Riley about the James Island flooding as city of Charleston employees Howard Chapman and Laura Cabiness (back right)look on. File/Brad Nettles/Staff 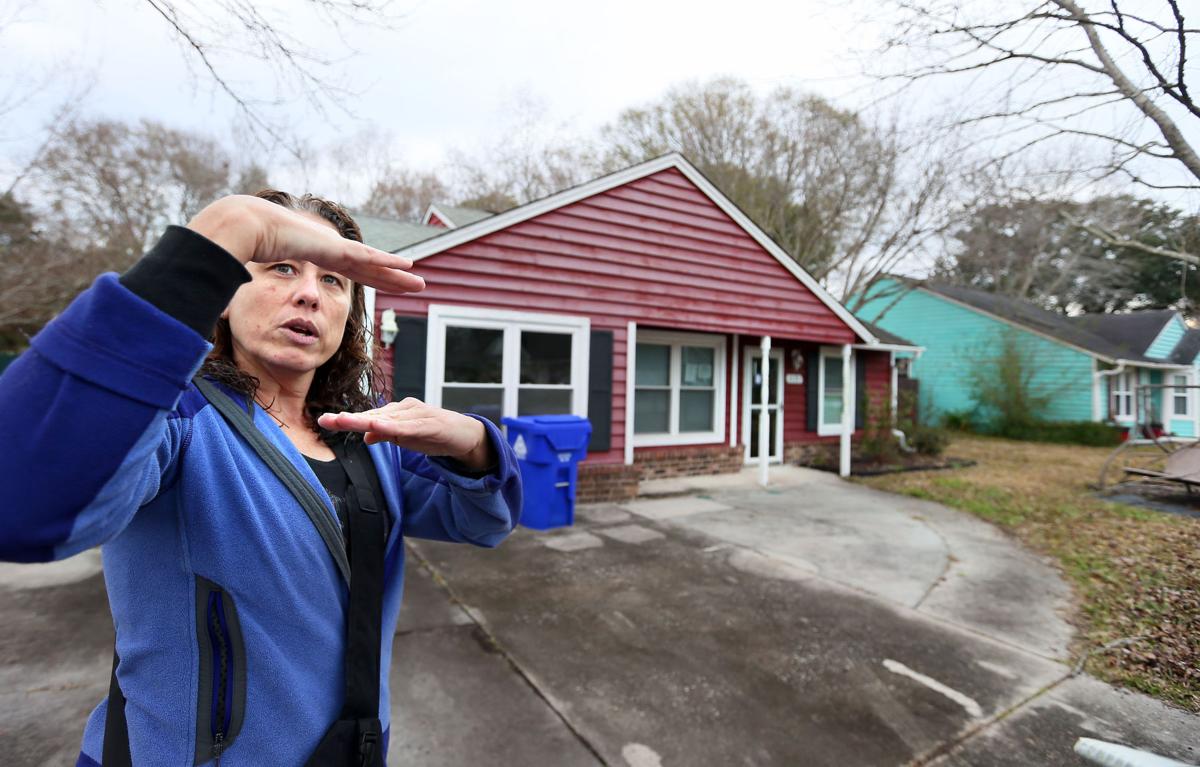 "This problem started with the city. This problem needs to end with the city," Ana Zimmerman said on Monday, Jan. 28, 2019, of the flooding problem on Shoreham Road, where she and her family have left their home in the Willow Walk community on James Island. Wade Spees/Staff 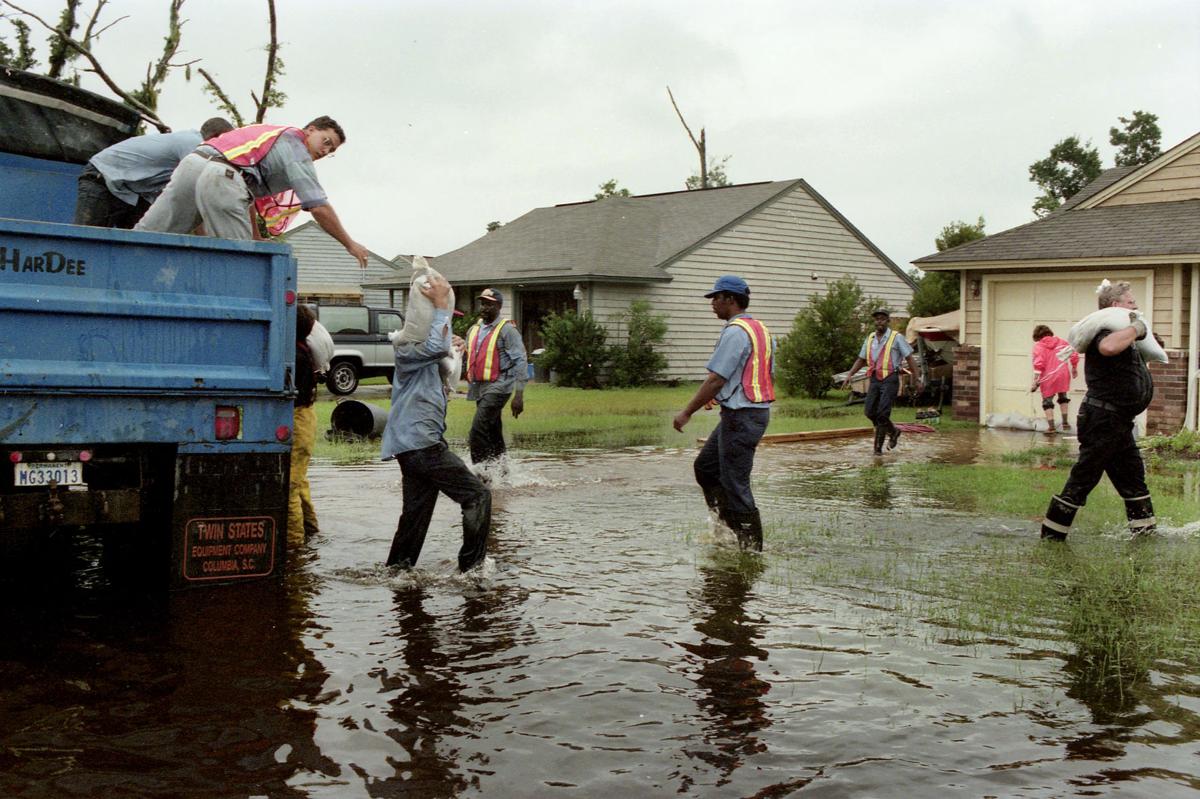 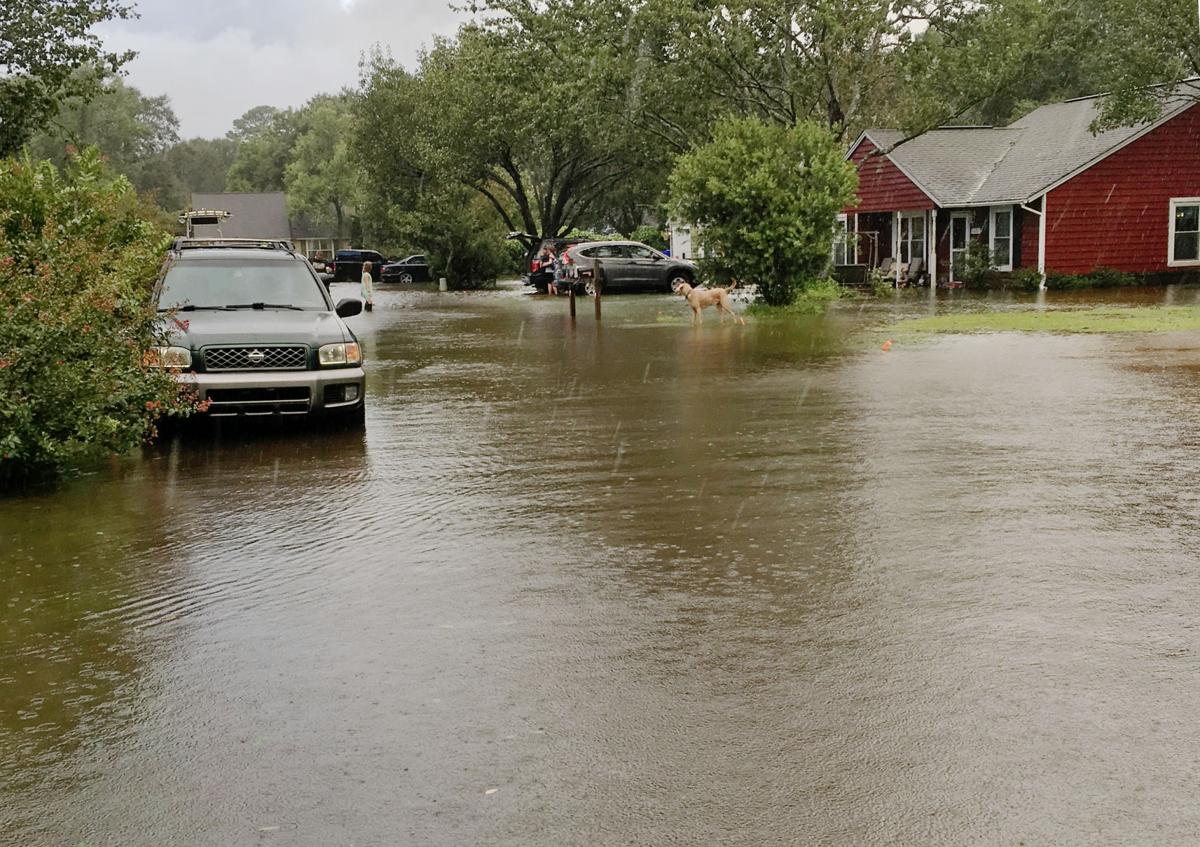 Floodwater in 2017 breaches homes in the Willow Walk community. File/Provided 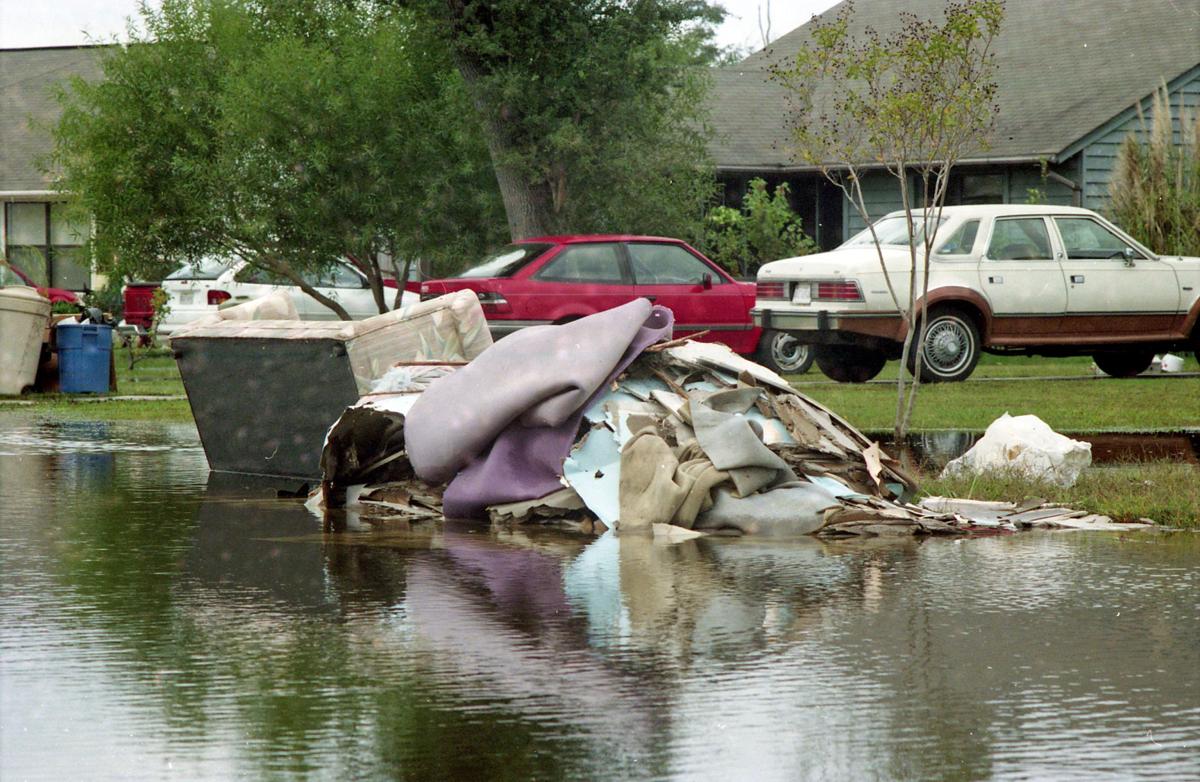 Debris sits outside a home on Shoreham Drive in the Willow Walk subdivision on October 14, 1994. File/Brad Nettles/Staff

Years of consecutive flooding in Charleston prompted a federal fraud investigation into how a series of flood-prone homes on James Island were developed.

Residents who suffered flooded homes asked for the probe. But city officials were cleared and, because of the statute of limitations, so was the builder.

Left with the cost of cleaning up and paying for three decades of repeated damage: individual homeowners.

The fraud investigation was conducted by the Federal Emergency Management Agency, which offers flood insurance and sets guidelines for local disaster management. The inquiry was sparked by two activists who lodged multiple complaints in 2018 over how Charleston has handled flooding.

A chief issue in the complaints was the construction of 19 houses in James Island's Willow Walk development in the late-1980s. Some were built as much as 3 feet below the height then required by FEMA.

The years-old mistake has been highlighted as Charleston faces a reckoning for decades of sprawling development on a low landscape.

Climate change is compounding the effect of poor drainage and new developments built on trucked-in fill dirt, sending higher tides and more intense rains to the aptly named Lowcountry. The city has been pummeled by flooding and severe storms, with standout events in 2015, 2016 and 2017.

All three of those events sent water rushing into Willow Walk, which was constructed by Great Southern Builders. When the company found several of the houses were too low, it asked a Charleston board for permission in 1987 to let people live inside anyway — and got it.

"It was a mess, it was a real mess," said Dave Nichols, the construction manager on the project.

In addition to avoiding a conflict over the houses in the 1980s, Great Southern Builders also skirted consequences in the 2018 investigation. FEMA found "indications of fraud," but determined these problems occurred too long ago to prosecute the builder today.

When told of FEMA's findings, Nichols called them "absolute bull" and insisted that he and his company did everything it could to help homeowners.

Before the Willow Walk project, Great Southern Builders built homes in four other Charleston-area communities, in Myrtle beach and in Augusta. Nichols said the company didn't have issues on those other projects.

Another firm of the same name does business today in the Charleston region, but has no connection to the 1980s construction.

Charleston, meanwhile, was not found to have committed fraud in the investigation, but FEMA highlighted weaknesses in building inspections at the time Willow Walk was constructed.

"The city of Charleston had the authority to halt the construction of these homes," the report read. "However, they failed to discover that the homes were not built to the required (elevation) through their lack of oversight on the building process."

After that failure, investigators wrote that the city was "forced into granting variances" for the too-low homes.

Nichols said it was a surveyor who missed a change in FEMA's flood zones, which determined how high the Willow Walk houses should have been built.

Back in 1987, Nichols argued to a city board that his company needed occupancy certificates for the homes. If the 17 affected buyers weren't allowed inside, Great Southern might go bankrupt from subsequent lawsuits.

The builder got permission. FEMA warned Charleston in 1988 that this was a "serious violation" of flooding regulations, and the city replied that they would do a better job of monitoring construction in the future.

"We were stuck," Nichols said. "We couldn’t find any way to get out of it or to help people out we sold houses to. They were in a heck of a bind."

Despite dodging lawsuits, the company shuttered within a few years. Nichols said an economic downturn was to blame.

Meanwhile, the original homeowners' "bind" was passed from person to person for years. The neighborhood would flood, homeowners would patch up their houses and re-sell to sometimes unsuspecting buyers.

In 2005, Ana Zimmerman bought one of the Willow Walk houses. Her Shoreham Road home flooded multiple times. Zimmerman, an immunologist, watched her daughter fall ill from persistent mold afterward. She later found the house had flooded before she owned it.

Zimmerman was one of the people who sparked the federal investigation with a complaint.

"I am looking for what is the most effective way to get kids out of harm's way," Zimmerman said. "That’s always what I’ve been looking for."

Zimmerman has since moved away but refused to sell her old home. She got a grant to demolish her house but hasn't been able to because of an outstanding mortgage balance. Court records indicate the home is on the brink of foreclosure.

Other families with small children still live on Shoreham Road. Multiple current residents declined to be quoted in this article.

As Willow Walk flooded repeatedly, 10 of the low-lying houses racked up more than $450,000 in National Flood Insurance Program claims in roughly the past 30 years.

"I feel terrible, I really do," Nichols said. "I feel for everybody who got wrapped up in this deal."

"It's now built into, not only our permitting process, but actually into our permitting software," Charleston Floodplain Manager Stephen Julka. "You have to confirm the flood zone, confirm the base flood elevation and confirm that the plans are compliant before you can proceed further though the software in order to issue a permit."

The complaints to FEMA weren't limited to James Island.

Another Charleston resident, Beatrice Bernier, made a broader claim in 2018 that present-day city officials were not adequately protecting downtown residents from flooding. Bernier used to live in a historic district home that flooded multiple times. (Full disclosure: she is married to Post and Courier contributing columnist Steve Bailey).

On that count, investigators also cleared the city. They cited the city's search for grants for work on raising the Low Battery sea wall, and other fixes.

While FEMA determined Charleston didn't commit fraud, many details of the investigation remain unclear. The agency chose to hold back 73 pages of the report when it provided the document to The Post and Courier in response to a records request. It heavily redacted other sections.

Greg Bridges, of the FEMA office that handles public documents, said he could not give any more detail on the withheld pages, such as whether they were transcripts with witnesses, emails with complainants or other supporting documentation.

The office cited federal privacy law in keeping much of the material. The same law has blocked prospective house buyers from looking up flood insurance histories of homes.

The Post and Courier has filed an appeal, arguing that FEMA's omissions are overly broad.

Meanwhile, a second inquiry into the city's flooding management is ongoing, this time by state officials. Since mid-2018, Charleston has been answering questions from the state flood mitigation office on how it's handled past floods.

In the course of that process, flood program staff with the S.C. Department of Natural Resources questioned whether the city even knows exactly how many homes have been underwater in recent years.

That information is important because if an older house in a flood zone is damaged enough, FEMA regulations dictate that it's either demolished or elevated. The rule is meant to stop the same houses from being flooded over and over and further draining already debt-ridden federal flood insurance.

In a June investigation, The Post and Courier showed that Charleston missed at least five such homes in the repeated floods since 2015. The newspaper used flood insurance claims to pinpoint some of the damaged houses, a strategy that city officials said at the time they could not use.

Now, DNR has green-lighted that approach. Julka, hired as the city's first Floodplain Manager in March 2018, reported to the state in November that an initial search turned up 2,100 damage claims that were unaccounted for in the city's records.

That doesn't automatically mean that 2,100 homes have to be hoisted in the air or bulldozed. FEMA may have listed some homes as inside the city when they're not, a common mistake with Charleston's Swiss-cheese-like city limits.

"I have not even begun to dig into that enough to give you any sort of estimate with certainty," Julka told The Post and Courier in December.

When the list is narrowed, city officials may be left with the uncomfortable task of telling some homeowners that their homes don't follow flood rules. It could block those owners from making future home improvements or repairs. Homeowners would have to elevate before adding a wing or renovating a kitchen.

Dennis Schimpf filed a defamation and negligence lawsuit in Berkeley County this week, alleging the website inaccurately reported that his Woodford Street home was in foreclosure.