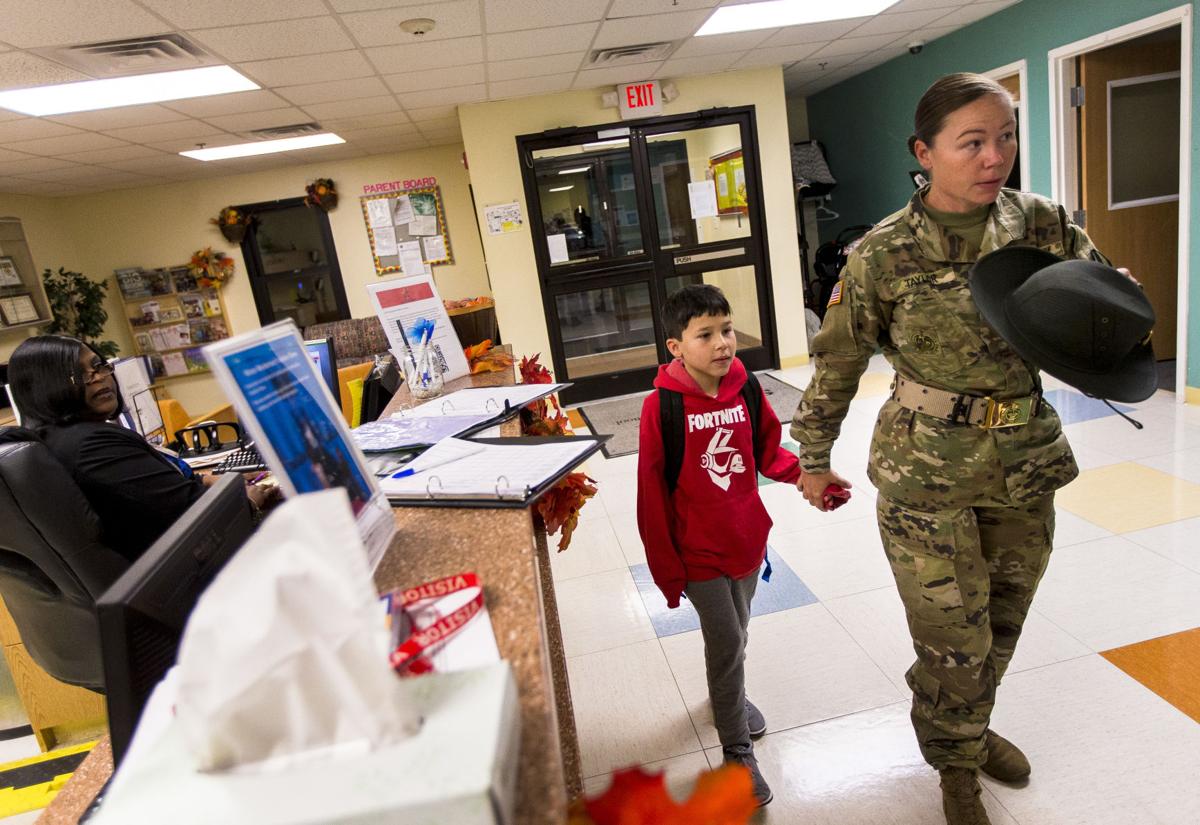 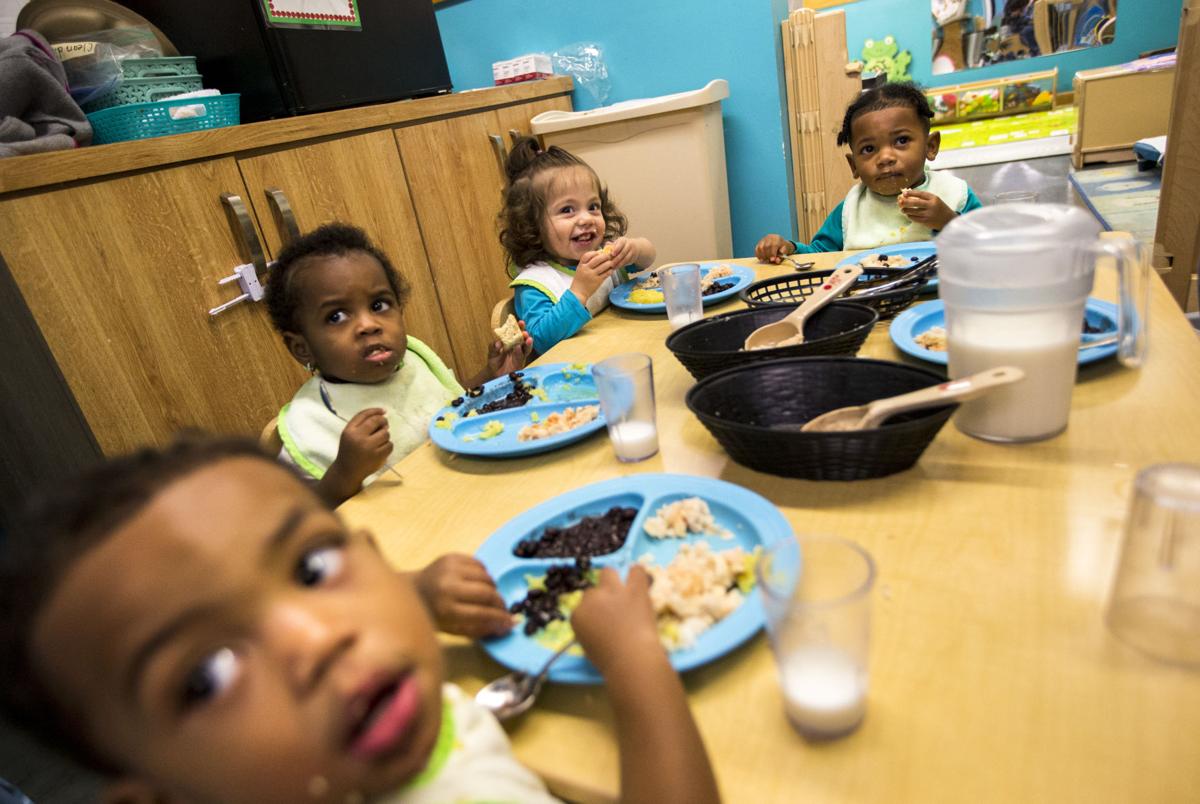 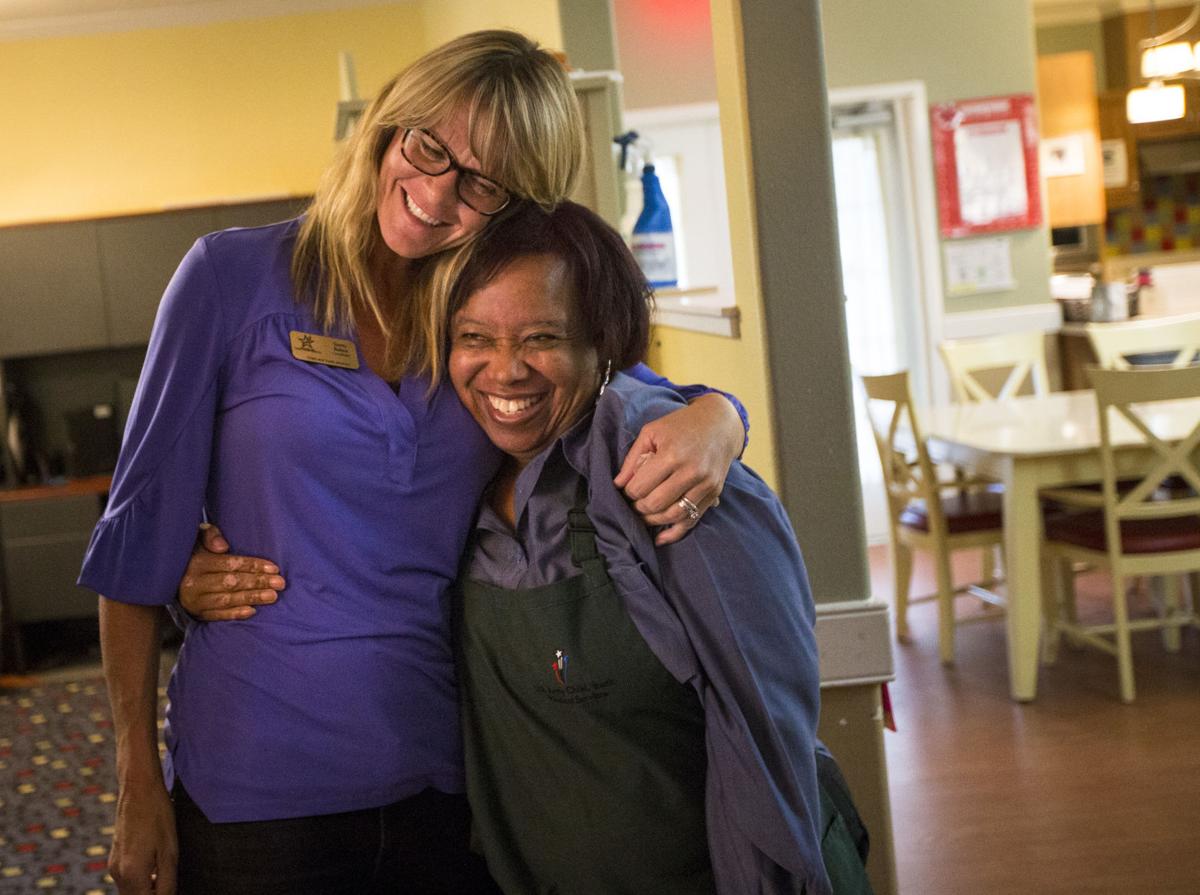 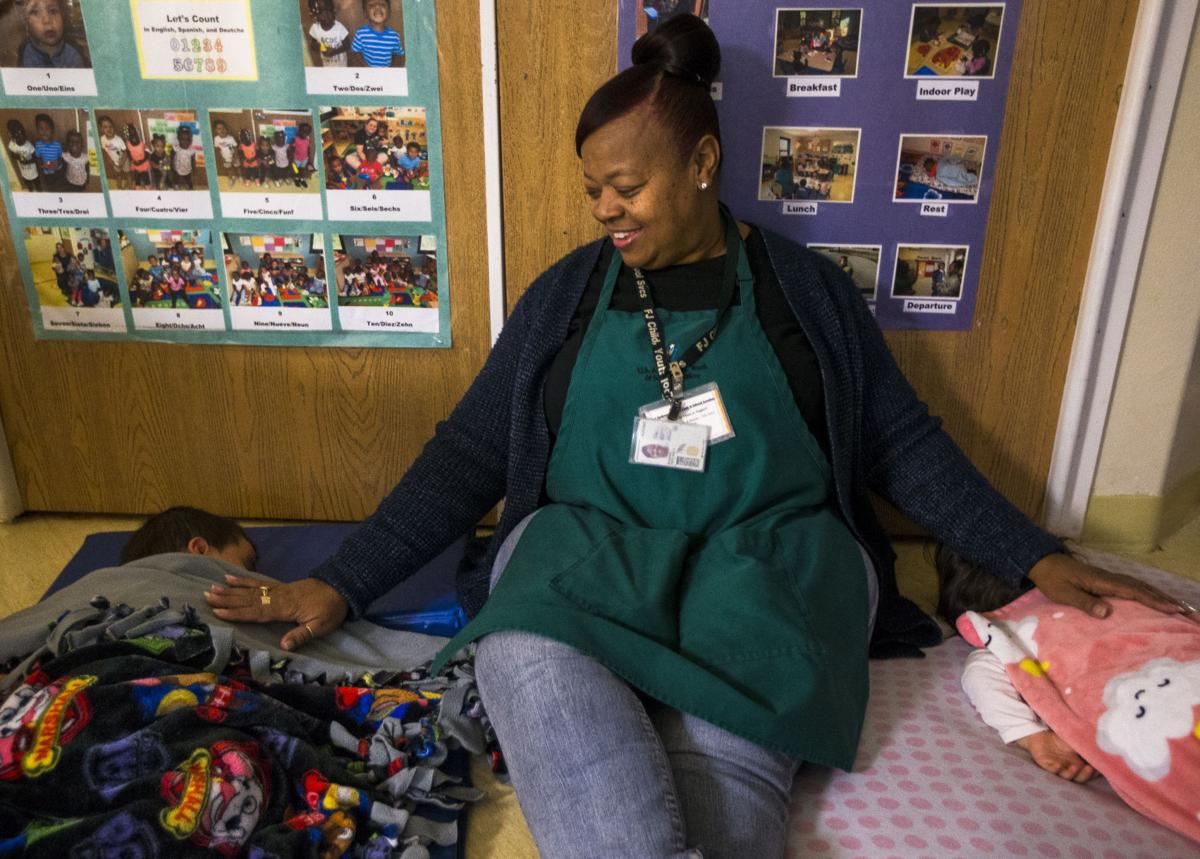 COLUMBIA — There are eight tiny beds at Fort Jackson, far too small for any war fighter.

They aren’t meant for soldiers, recruits or staff. Above each headboard is a slate with a child’s name on it. There is a baby blue cubbyhole that holds an Avengers backpack and at the foot of the bed is a small onesie neatly folded.

Tonight, some service members have to delegate the duty of tucking their child in.

Some moms and dads chose to put on a drill sergeant's hat and work until the early hours of the morning to train incoming recruits. They have to sacrifice reading a bedtime story to their daughter or checking for monsters under the mattress for their son.

Fort Jackson is the only Army post in the United States that provides 24/7 day care and child services for military families, according to post officials. It’s no small undertaking, and a staff of about 150 employees is there to work around the clock to bring the comforts of home to those toddlers that were born into an unconventional one.

"It's their home away from home," said Twylane Rogers, a 23-year employee at the military post. "We try to give them that same nurturing their parents give them."

South Carolina's only Army post is unique. The entirety of the branch's drill sergeants are trained at Fort Jackson and it is also one of the largest basic training stations for recruits in the nation. That distinction comes with special accommodations because turning young men and women into soldiers isn't a 9-to-5 job.

Funded by the Department of Defense, Fort Jackson's Child and Youth Services operation runs on an average $6.4 million a year to help provide day care and overnight care for nearly 1,000 children.

Running that mission from sunrise to sunset each day is Sunny Bolton, the head of the post's child care.

She said despite "rumors" of potential funding woes, the secretary of the Army recognizes the need for child care. She said it's important for soldiers to have their house in order before putting on the uniform. Child care is a huge part of that.

According to a study from the National Center for Children in Poverty, about one in four children in military families experience depression, one out of every five children had academic problems and 37 percent of children with a deployed parent reported that they seriously worry about what could happen to their loved one.

"We know that being away from their families isn't good for them," Bolton said. "So we want to make their experience as familiar as possible for them."

There are four centers at the Army post that are responsible for day care and overnight care. Service members pay based on rank, a luxury not offered in the civilian world. If a soldier makes less than $32,000, they'll pay $260 a month. If an officer makes $138,000, they'll pay $652 a month.

Most children start their morning out at the Imboden Child Development Center. Starting at 4 in the morning, parents in their battle dress uniforms will walk in to drop off their children.

Soldiers are failing the Army's new fitness test. Citadel cadets are figuring out why

Sgt. 1st Class Dennie Taylor, who walked in around 6 a.m. Tuesday to drop off her 9-year-old son Ethan, said that he's gotten used to military life. He's often chipper when he's ready to get up for child care, but saying their goodbyes each day "doesn't get any easier."

School-age children are are bused to the public schools on post. For the infants and toddlers, they are taken to their assigned rooms and set down to sleep. Throughout the day, some children may be bused up to three times to different locations.

"Sometimes children will put on their pajamas and then slip right into their shoes before being bused to the overnight facility," Bolton said.

Children are served breakfast, lunch and dinner. Last year alone, 395,000 of those meals were served.

It's not like a middle school cafeteria. Whether it's to a newborn or 10-year-old student, all meals are served family style. The main overnight facility, the Lee Road center, is designed to look like a home. Kids eat at a long table, right next to the kitchen.

For those children whose parent will be working late into the night, getting ready for bedtime will follow. Workers do it all. They bathe and swaddle infants, play with toddlers and help older kids with homework.

Bolton said she tries to limit the amount of overnight stays and only encourages enlisted soldiers to do so when it's absolutely necessary.

The care workers quickly transition from being strangers to becoming family for these children.

"The most rewarding part is when they know your name," program assistant Leontyne Thompson said. "They get so familiar with the building and they know what to do."

Rogers watches children between 18 months old and 3 years old. In her more than two decades on base, she's held a lot of babies. Some of them even come back to see her.

"I've had some that I've held in my arms, and then, before I know it, I see them bus in here for basic training," Rogers said. "It's the circle of life."

According to the United States Army's Survivor Outreach Services, that's the number of active duty and reserve soldiers who have died by suicide, accidents or combat since 2014. To remember their sacrifice and dedication to their country, the organization has placed a Christmas tree with nearly 400 gold stars on it in Gov. Henry McMaster's office this month.

Jim Croce wasn't meant to be a soldier, he was destined to be a singer. But some of the folk rock artist's biggest hits were inspired by his time in Columbia during Army basic training at Fort Jackson in the fall of 1966.

Letters to the Editor: Stop littering

I want to thank The Post and Courier for publishing the column, “Enforcement needed to curb Charleston’s ‘litter louts,’” by North Charleston …

Every Army drill sergeant is trained at Fort Jackson. Women are shaping the role's future.

In 10 weeks, an estimated 88 percent will graduate from the physically rigorous and academically demanding Drill Sergeant Academy at Fort Jackson in Columbia. The Army wants, and needs, more of them. Women are stepping up to fill that void.

After being flooded with applications in the fall, the governor's office has finally narrowed down three candidates who could run SC’s new Department of Veterans’ Affairs.