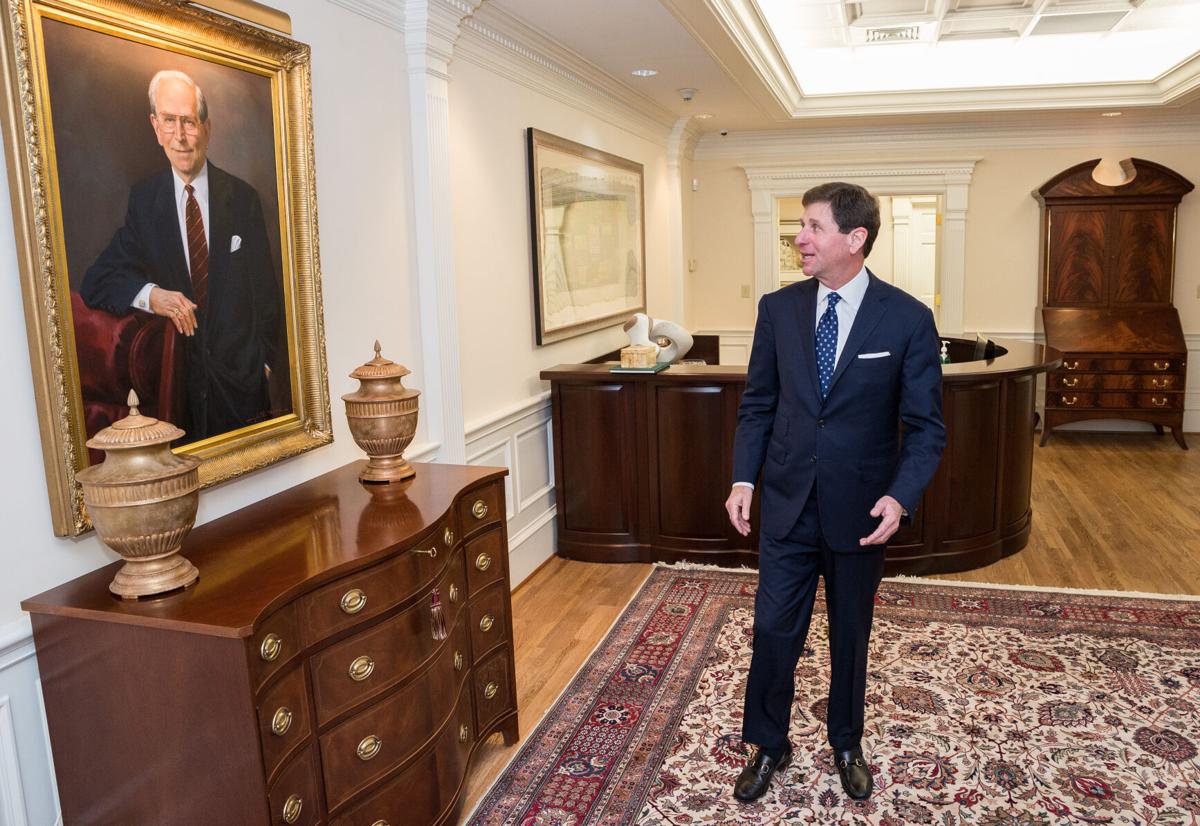 Columbia developer Bill Stern keeps a portrait of his father, Ben Stern, in the lobby of Stern Development's offices in Columbia. John A. Carlos II/Special to The Post and Courier 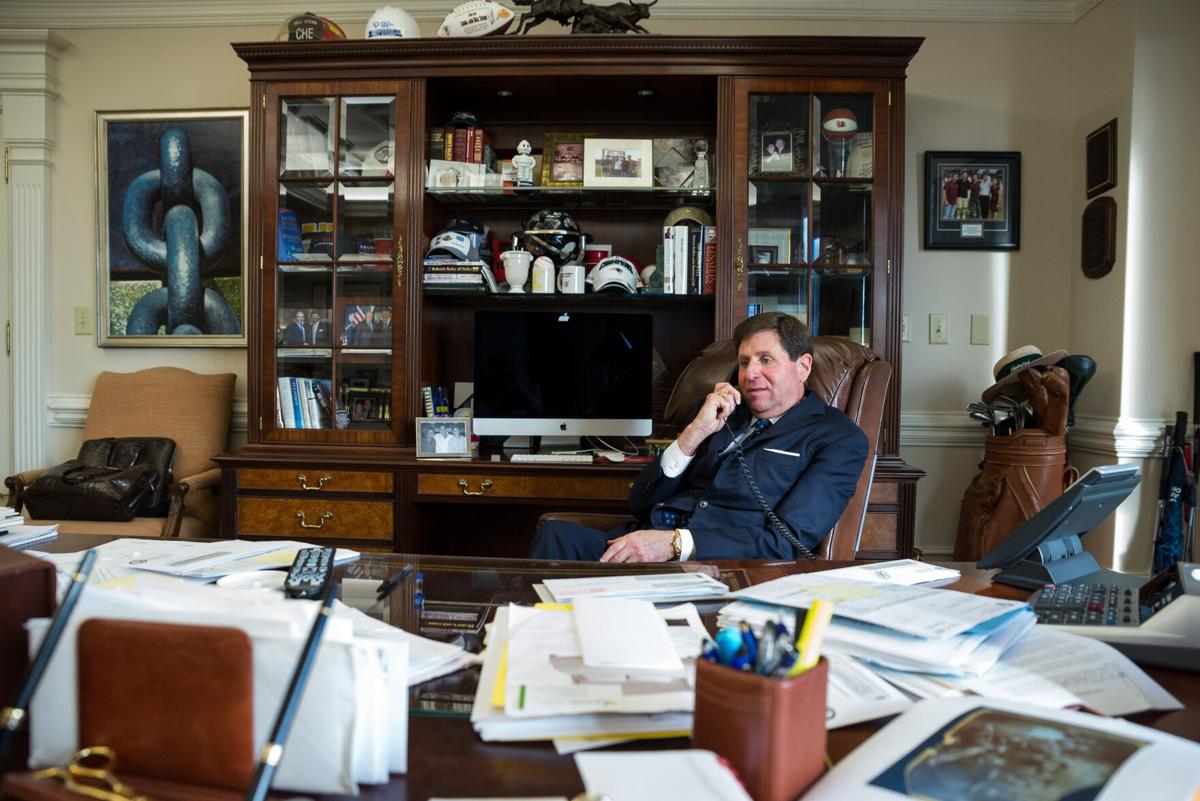 Columbia developer Bill Stern talks on the phone in his office at Stern Development in Columbia on Nov. 5, 2020. John A. Carlos II/Special to The Post and Courier 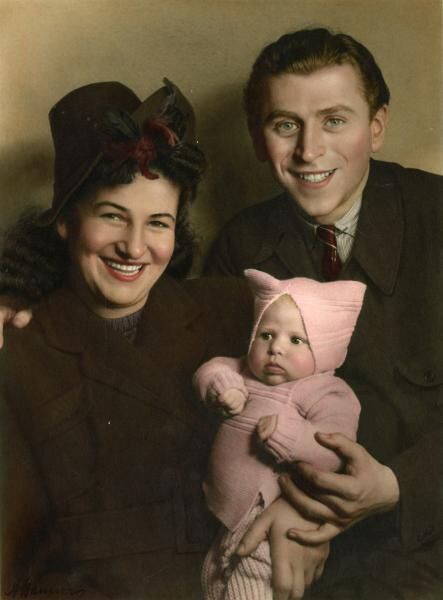 Holocaust survivors Jadzia and Ben Stern hold their daughter Lilly in this photo from 1948 — a year before the family immigrated to the United States. Provided 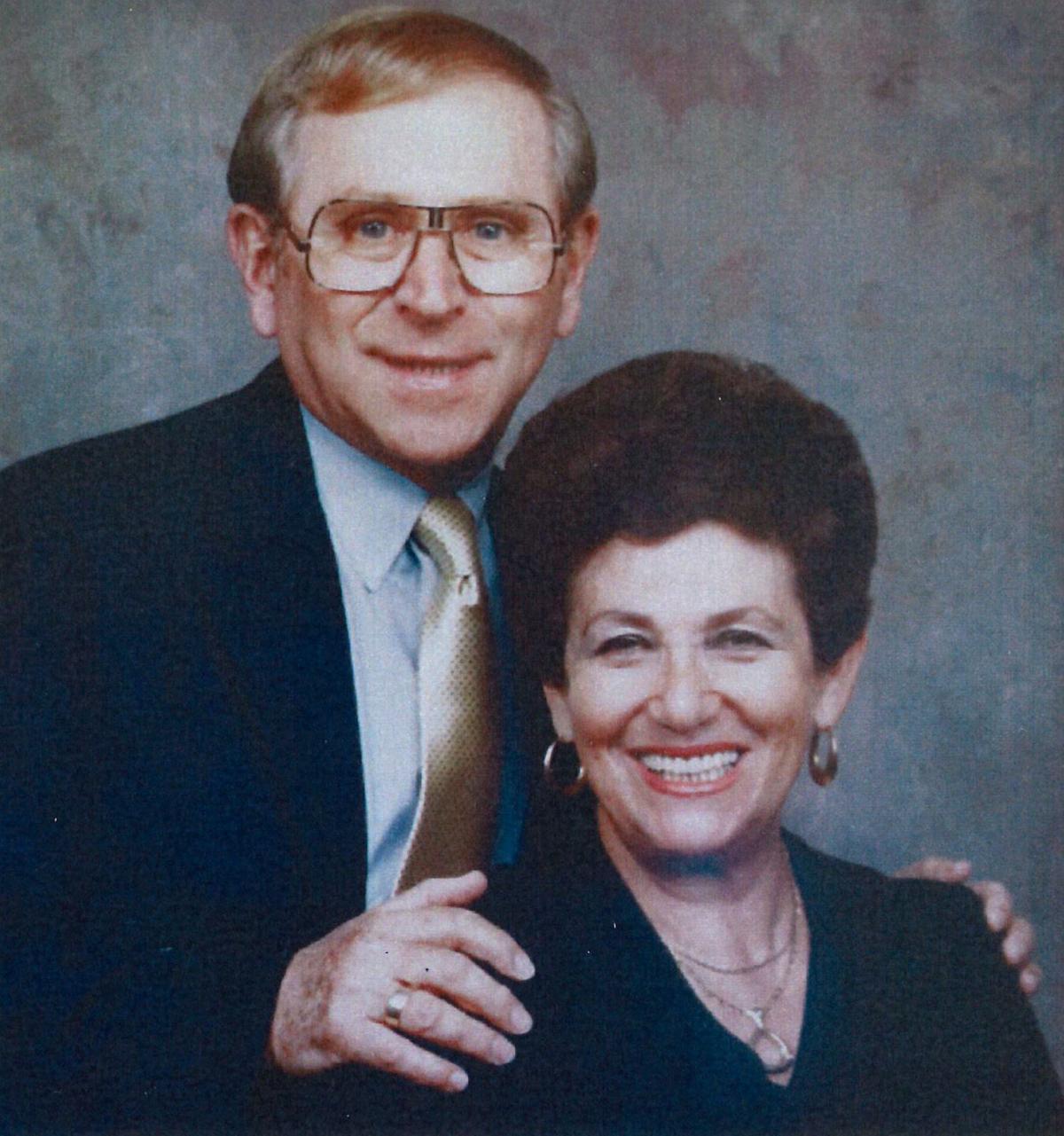 Ben Stern and his wife Jadzia were devoted to keeping the memory of the Holocaust alive for future generations. Provided 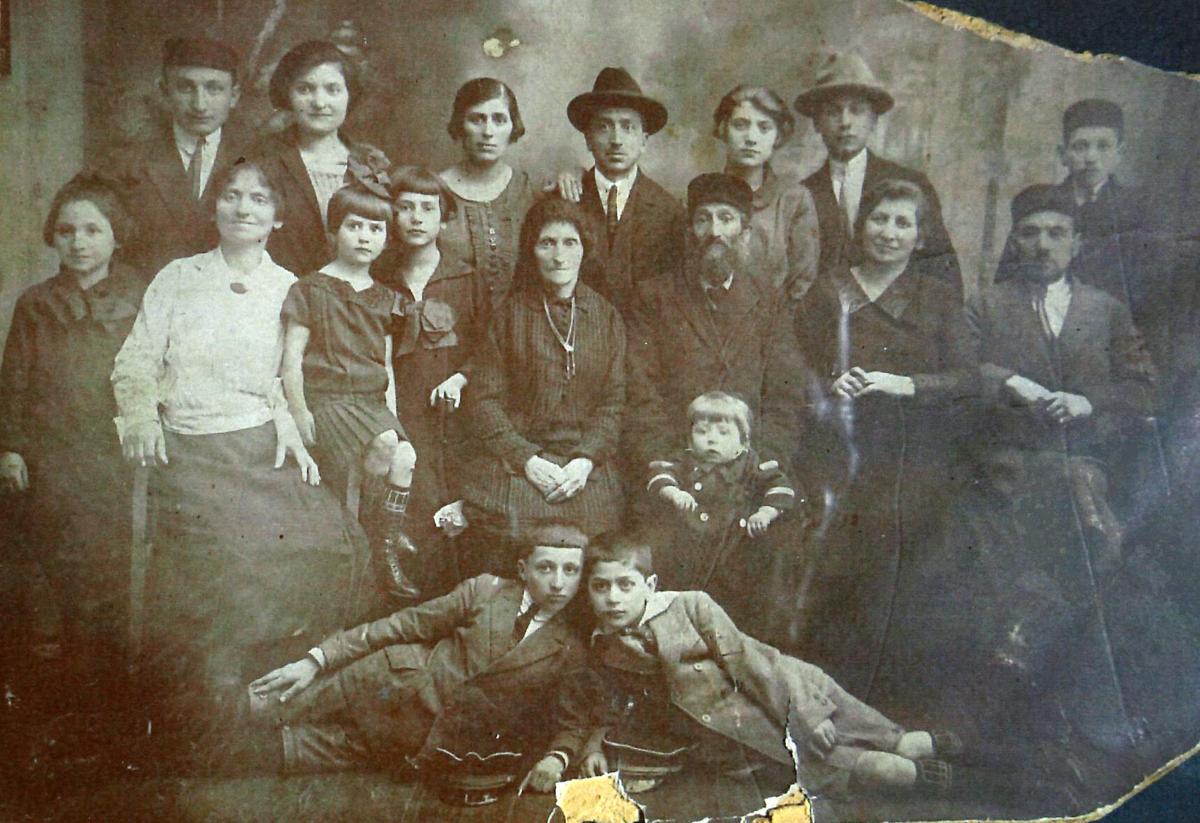 This is the only photo of Ben Stern's family that survived World War II. Ben Stern is the blonde child being held up by a man with a beard. His sister, Sophie, is the girl pictured with a bow in her hair. The rest of the family perished in the Holocaust. Provided

A portrait of Holocaust survivor Ben Stern occupies a prominent spot in the lobby of the Columbia development firm the late businessman started with his son, Bill Stern, after relocating to South Carolina following the horrors he experienced in Germany's death camps.

"I remember my father standing in front of the portrait one day — we were both leaving the office and locking it up," said Bill Stern, who was appointed last month by President Donald Trump to serve on the U.S. Holocaust Memorial Council. "And I said, 'Dad, God forbid when you pass away, I'm going to be leaving this office looking at you and I'm going to talk to you'. And I'll be damned if there hasn't been a time when I've left this office that I don't walk over to that portrait and tell him about all of the things that are going on."

Ben Stern died in 1999, and his son sees his appointment to the commission that oversees the nation's Holocaust Memorial Museum in Washington, D.C., as a way to carry on the work his father and late mother, Jadzia Stern, also a Holocaust survivor, did to bring awareness to the Nazi atrocities of World War II.

"The story has to be told," said Bill Stern, who also serves as chairman of the State Ports Authority, owner and operator of the Port of Charleston.

"People have to know that this was real because there are revisionists who want to claim the Holocaust never happened," he said. "It's become an obligation and a purpose for all survivors — and I call myself a second-generation survivor — to get out and tell the story."

Stern Development, located on the top floor of the BB&T offices the company built on Two Notch Road, grew out of the construction business Ben Stern started after immigrating to the United States with his wife in June 1949. A chance meeting with Southland Corp. executives shortly after his arrival led to a successful career building 7-11 convenience stores.

"It was overwhelming," he said. "We just could not put — we didn’t know where to put our eyes. It was all — everything was just like, you know, like you’re imagining. It’s a dream or something like that."

It's a wonderment Ben Stern instilled in his four children, including Bill Stern.

"We grew up believing the United States of America was the greatest place in the world," Bill Stern said, adding that his father emphasized the importance of school and hard work. "He'd say, 'Go get an education and you can be whatever you want to be.' Anything is possible in America. It truly was, to him, the American dream."

Bill Stern also recalls the nightmares his parents had when he was a child, as they relived their Holocaust experiences in their dreams.

"We remember, vividly, three or four nights a week my mother screaming — she'd had a terrible nightmare," Bill Stern said. "We would run in and my father would say, 'It's OK, she's having a bad dream'. They would never tell us what it was she was dreaming about."

Holocaust survivor shares her story of childhood in Nazi Germany

It wasn't until Bill Stern was in college that his parents felt comfortable enough sharing their stories with others, even though recounting the experiences brought them pain. The stories they told were of man's most inhumane acts toward another.

Both Ben and Jadzia Stern, who didn't meet until after the war, were living as teenagers in Poland when the German army invaded that country in 1939 and began rounding up Jews to send to concentration camps.

Ben Stern, in the video interview, said he remembered the trip to Auschwitz in a railroad cattle car, where people were squeezed in so tight without food or water that several died standing up. When ordered off the train by Germany's SS, Ben Stern said he was told to move to the right. He later learned that those sent to the left wound up in crematoriums.

"With the thumb left or right was your destiny — are you going to live or are you going to die," he said, adding the first thing the Nazis told the prisoners to do was take a shower. "It was just a matter of opening the faucet to see if water comes out or gas."

Ben Stern was tattooed with the number B-3348. Every day in the camp he could smell the burning flesh of other prisoners who'd been sent to the gas chambers. His daily work in the wintertime consisted of moving a heavy steel beam from one end of the yard to another, and then back again. The frozen metal would rip the flesh off his hands. Daily meals consisted of warm water the Germans called soup and a slice of bread. When he was caught hiding some soup in his bunk, the German guards beat him unconscious with a shovel handle, he said.

"I'm a businessman now and I'm independent, but at no time have I taken this place, America, for granted," he said. "I worship every day the ground I walk on and so does my wife."

Jadzia Stern, who initially hid from the Nazis in an attic trunk as the rest of her family was captured, tells similar stories in her videoed recollection of the Holocaust. After her ultimate capture and arrival at Auschwitz on a train, German soldiers snatched her sister's baby from her arms and killed it in front of her.

"I constantly live with the thought of the Holocaust," Jadzia Stern said in the video.

South Carolina, in 1989, was one of the first states to create a Council on the Holocaust, which provides educational programs documenting the systematic genocide of 6 million Jews during World War II. Jadzia Stern was one of the council's biggest advocates, telling her story in public schools to educate students.

Today, Bill Stern and his siblings continue the effort to educate others about the Holocaust. As a U.S. Holocaust Memorial Council appointee, Bill Stern will serve a five-year term with 54 other council members who raise private funds for the museum, its educational resources and to commemorate the Holocaust. He will join U.S. Sen. Tim Scott as the only other South Carolinian on the council.

Bill Stern sees the appointment as another opportunity to promote the ideal that everyone should be treated equally and that the atrocities of the Holocaust are never repeated.

"If you don't think this can happen again, you're mistaken," he said. "You get a charismatic leader in power at time when the country is in despair ... when people are disenchanted and looking to latch on to something. Then they start believing whatever that leader says, and they go along with it. If good people don't step up and say this is wrong, that's what can happen."

Ben Stern would undoubtedly be proud of his son's appointment — he had once hoped to serve on the council but the opportunity never arose. To him, there were few things more important than making sure the Holocaust was never forgotten, even though each retelling brought him agony.

"I don't mind having nightmares after telling my story," Ben Stern said during his video interview, "so future generations can benefit from it."

To see videos of Ben and Jadzia Stern recounting their experiences as Holocaust survivors, visit the following websites: