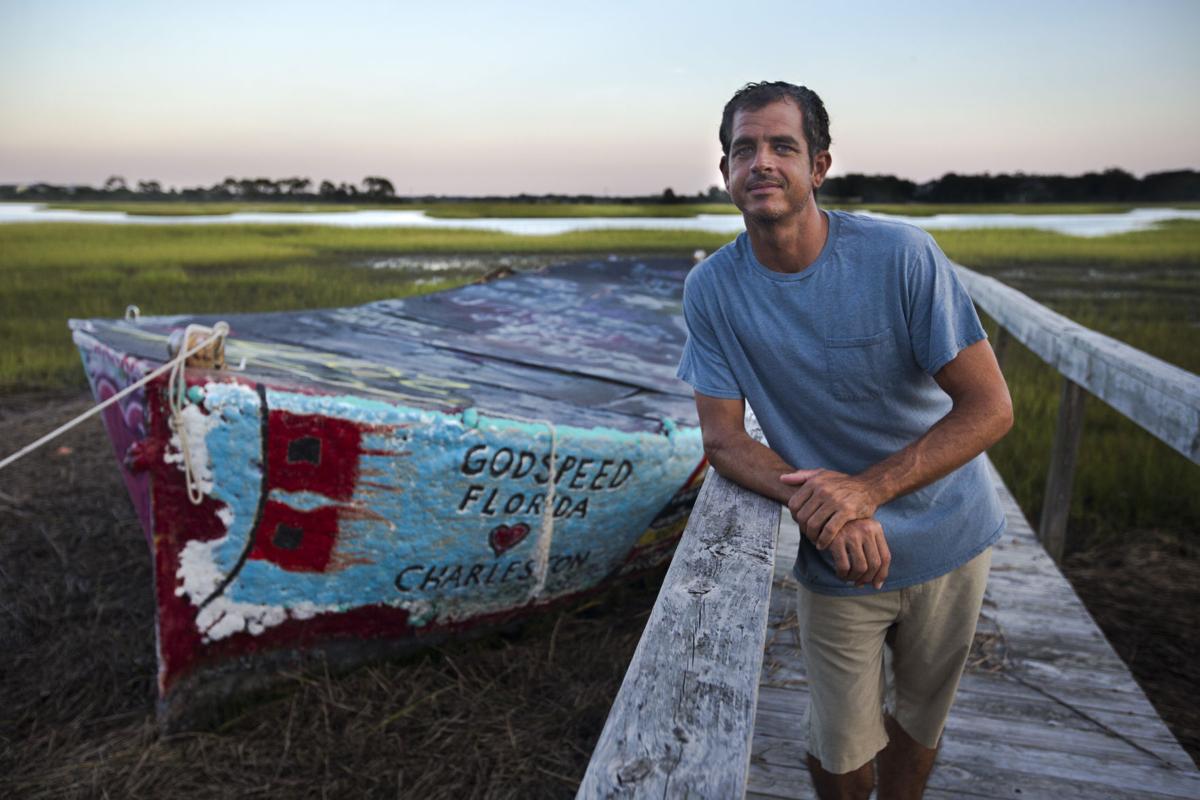 The Folly boat that crashed into Chris John's dock during tropical storm Irma sits in the marsh behind his house on Thursday, Sept. 14, 2017. "In a perfect world I hope it goes somewhere where it can be secured and go on a stand where people could still paint it, where it will remain an icon for Charleston," John said. Michael Pronzato/Staff 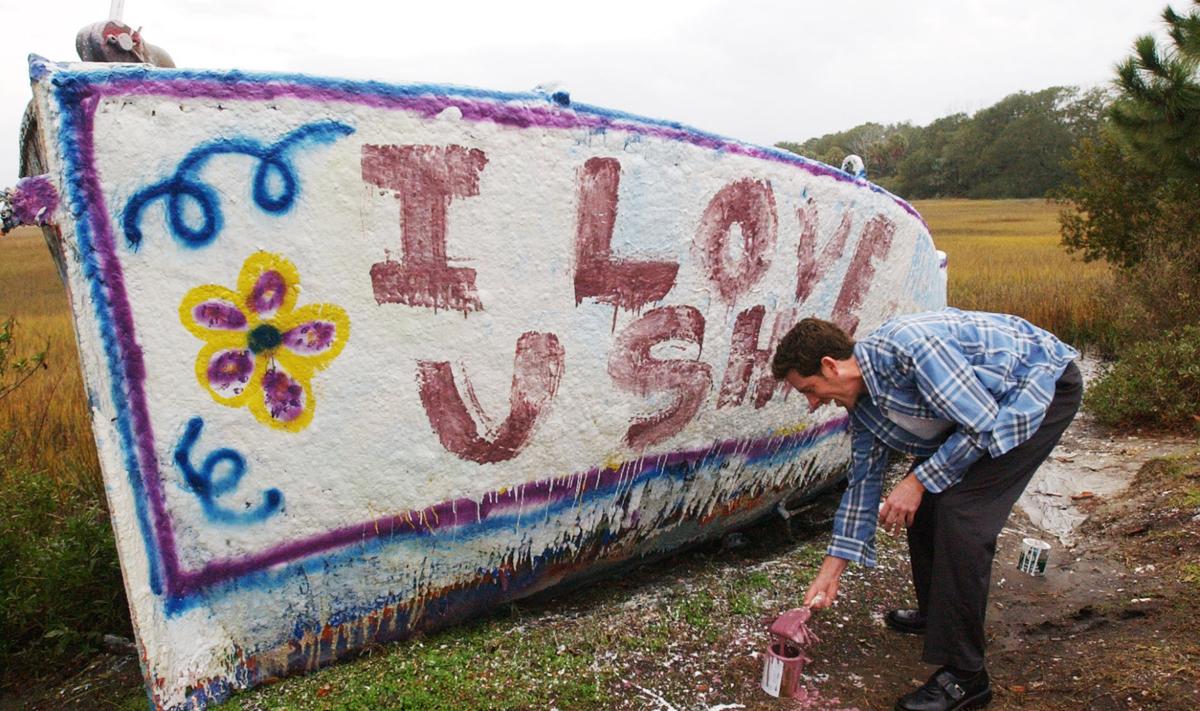 Groom to be Phil Whitesell of Folly Beach dips his brush to finish painting his love for his fiancee, Shani Urban, on the frequently painted boat on Folly Road on January 7, 2005. File/Grace Beahm/Staff

The Folly boat that crashed into Chris John's dock during tropical storm Irma sits in the marsh behind his house on Thursday, Sept. 14, 2017. "In a perfect world I hope it goes somewhere where it can be secured and go on a stand where people could still paint it, where it will remain an icon for Charleston," John said. Michael Pronzato/Staff

Groom to be Phil Whitesell of Folly Beach dips his brush to finish painting his love for his fiancee, Shani Urban, on the frequently painted boat on Folly Road on January 7, 2005. File/Grace Beahm/Staff

Chris John didn't ask for the iconic Folly Boat to drift into his backyard and destroy his dock.

And he doesn't want to keep it.

The sooner it returns to the public domain as a paint canvas, the better.

"As much as people want to be involved, the only thing that people need to be concerned about is: I don't want this boat," John said while standing next to the boat's current resting site, the marsh behind his home on Sol Legare Road.

"I want to give it back to the community."

But who exactly in the community wants to take it back? And who ultimately will decide?

It's going to be complicated, if it happens at all.

The Folly Boat arrived on Folly Road by an act of God, floating there during Hurricane Hugo. But returning it as a roadside attraction 28 years later would mean red tape, lawyers and a liability that some bureaucrats and politicians may not be willing to accept.

“Mother Nature didn’t get permits back in ’89, but to affirmatively put it back would trigger a lot of rules,” said Folly Beach City Administrator Spencer Whetmore.

She pointed to a review by the city's legal staff, the S.C. Department of Transportation and state environmental regulators.

“We all believe that the best option for the boat would be a safer location on private property,” she added.

“We were very surprised that it floated at all," he said in the aftermath of Tropical Storm Irma, that carried the boat about a half-mile down the marsh.

"It was missing. We didn’t know where it went," he said. "We figured it’s at the bottom of the creek somewhere.”

But does its return to Folly Road rank as a city priority?

“It’s on the list, but it’s down the list as far as the city’s concerned,” he said.

John's video of the boat coming in at the height of the storm Monday went viral. CNN and The New York Times showed an interest. Many were stunned that the oft-painted boat once planted in the ground was able to rise with the tide at all.

Moving the 50-foot long, heavy metal boat is easier to say than do. The vessel's weight, by John's wild estimates, is probably best measured in tons, not pounds. It's also fragile in spots, with at least one hole visible on the back side.

He doesn't see dragging the boat over 100 yards of marsh back into the open sound between his home and the backside of Bowens Island as feasible; the water might be too shallow behind his house to get a floating crane in there.

That means it might have to be transported through his back yard and onto Sol Legare Road, probably meaning the removal of his security fence and taking some trees out.

What ever is done will likely prove expensive. But John says he's already had some discussions with a source he won't identify about moving it to a spot on private property within the Folly Road corridor.

"In a perfect world I hope it goes somewhere where it can be secured and go on a stand where people could still paint it, where it will remain an icon for Charleston," he said.

Chad Rhodes of James Island runs follyboat.com, a website he and others started in the late 1990s to document the artwork, messages and tributes painted on the boat’s hull. People this week have chimed in on a Facebook page he runs in the boat's name, some debating what they think should happen to it and others offering to help relocate it to its original spot. One man offered up his crane service.

“The fact that there’s that much love and hate going on around a boat that people would paint is interesting,” said Rhodes, who didn’t take a stance on what should happen to the boat.

On people’s interest in the boat during the storm he said, “Honestly, it’s kind of crazy because I know it’s iconic. But with everything else that’s been going on, it’s funny that there’s been so much interest in this. I know there’s a lot of love for the boat.”

Federal law, as well the state and local governments that control where the boat used to sit off Folly Road, say that moving it back to its former resting site — or anywhere else on public land — isn't as easy as it sounds.

It’s widely thought that salvage law gives anyone who comes across an abandoned ship the rights to it. But it’s not as easy as that. Salvage is a legal procedure involving filing complaints, claims and liens. Any recovery of a vessel can end up in federal court.

Ryan Godbout of James Island said John, the Sol Legare homeowner, called him Monday afternoon as the boat washed into his backyard. Godbout quickly arrived and secured it to the dock. Godbout said that makes him the lawful owner.

It's unclear if there will be any legal battle. Godbout said he is not looking to profit from what happened and instead wants the same thing as most other people: the boat's return to Folly Road.

"Without the boat there, it’s not going to be the same,” he said. “You’ve got the Folly Boat, the pier and the lighthouse. Those are Folly’s little icons."

Godbout said while he estimates moving the boat could cost between $15,000 and $20,000, he also has talked to several people interested in lending a hand.

"I don’t think getting it moved back would be a problem," he said.

But governmental regulations will have to be considered.

The S.C. Department of Health and Environmental Control is aware of the Folly Boat's symbolism and this week said the agency is encouraging the city of Folly Beach to identify "a suitable upland location" for it.

"DHEC understands the cultural significance of the Folly Boat, however state regulations do not allow for its replacement back to its original location, which is within the marsh critical area," spokesman Tim Kelly said.

The S.C. Department of Transportation also has a seat at the decision-making table since the boat was in the public right of way, by about 5 feet.

If it were put back a little farther from the road there wouldn't be an issue with DOT, said District Engineering Administrator Tim Henderson. But DOT would work with the county to get an encroachment permit if the boat were to be put back where it was.

Other options being discussed by some include moving the boat to a parcel of privately owned land nearby, along with some sort of private fundraising campaign to make it happen.

Such a campaign could be very successful, at least judging by the number of people who have painted the boat over time. While the boat recently made headlines when members of the S.C. Secessionist Party painted Confederate battle flags on it — which were quickly covered over — most messages have been cheerful. Paint jobs have announced local birthdays, engagements and the like.

Godbout, who said he has repainted the boat several times himself, said it usually gets a new look a few times a week. Inches-thick coats of old paint have peeled from its hull more than once.

Godbout said the record for a single message remaining on the boat was set about a decade ago and involved a mural tribute to the nine Charleston firefighters who died in the 2007 Sofa Super Store fire. That remained visible for 18 straight days, he said.

As the boat's future gets sorted out, Rhodes, the Facebook page operator, said everyone should take a step back and realize what the boat has meant over the years.

“Everybody just needs to be understanding and be thankful that they did have it for 20 years to share memories on,” he said. “And we’ll see what happens."

Angie Jackson and Bo Petersen contributed to this report.

Looking back at the Folly Boat

Looking back at the Folly Boat over the years.