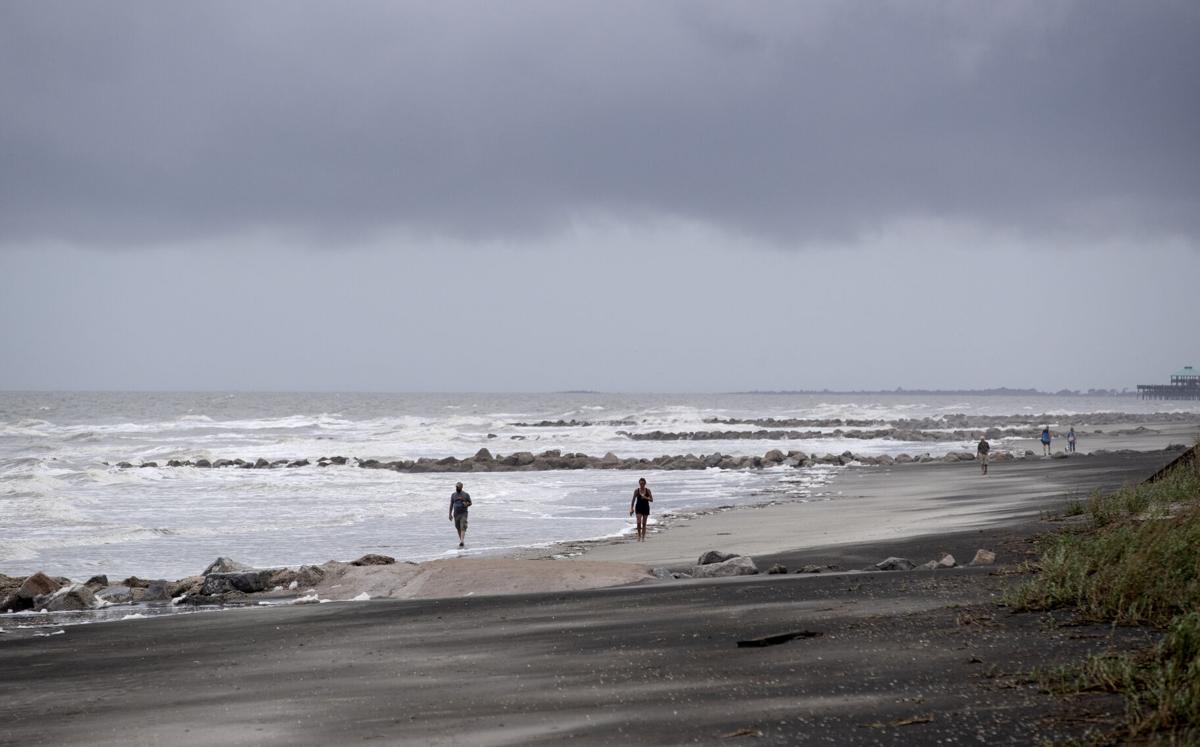 Storm clouds loom over The Washout at Folly Beach on Sept. 17, 2020. A proposed plan to battle erosion on Folly Beach, released in draft form by the Army Corps of Engineers, would replace an existing outline to put sand back on the beach every eight years since 1993. File/Grace Beahm Alford/Staff 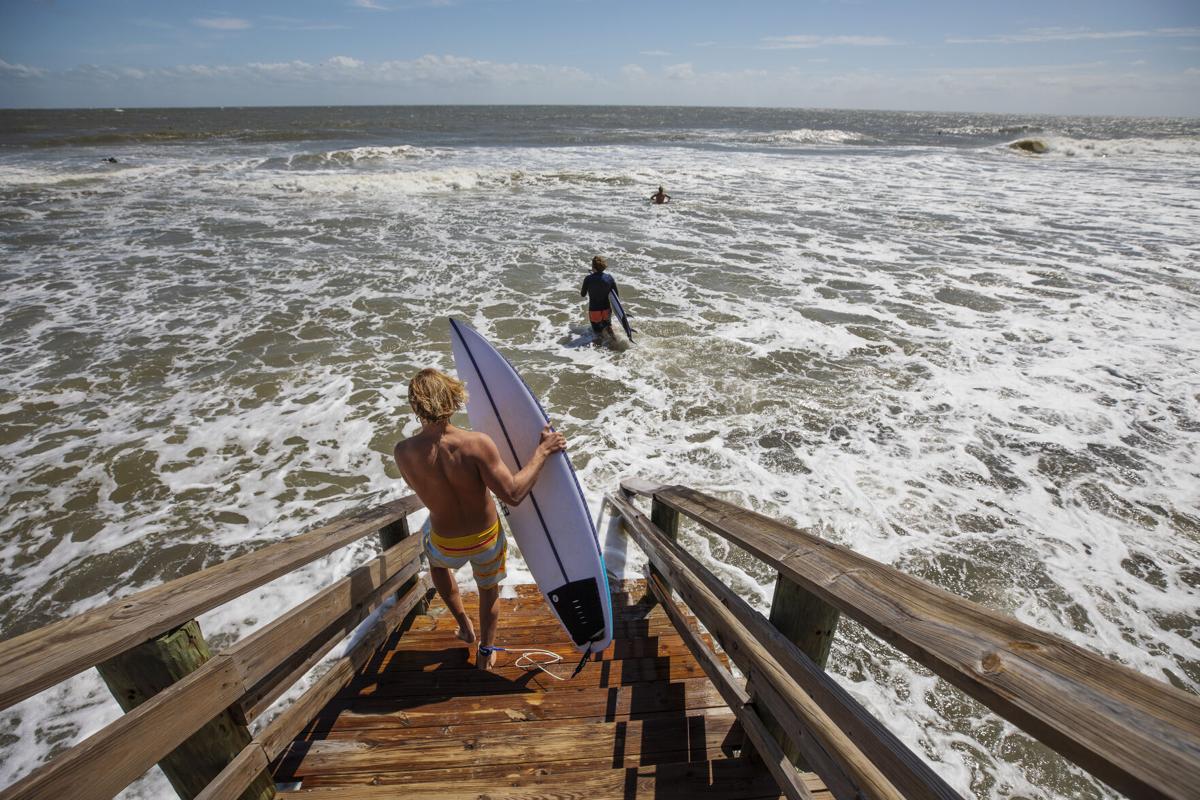 Surfers head out to the ocean during high tide on Folly Beach, Monday, Sept. 21, 2020. File/Lauren Petracca/Staff 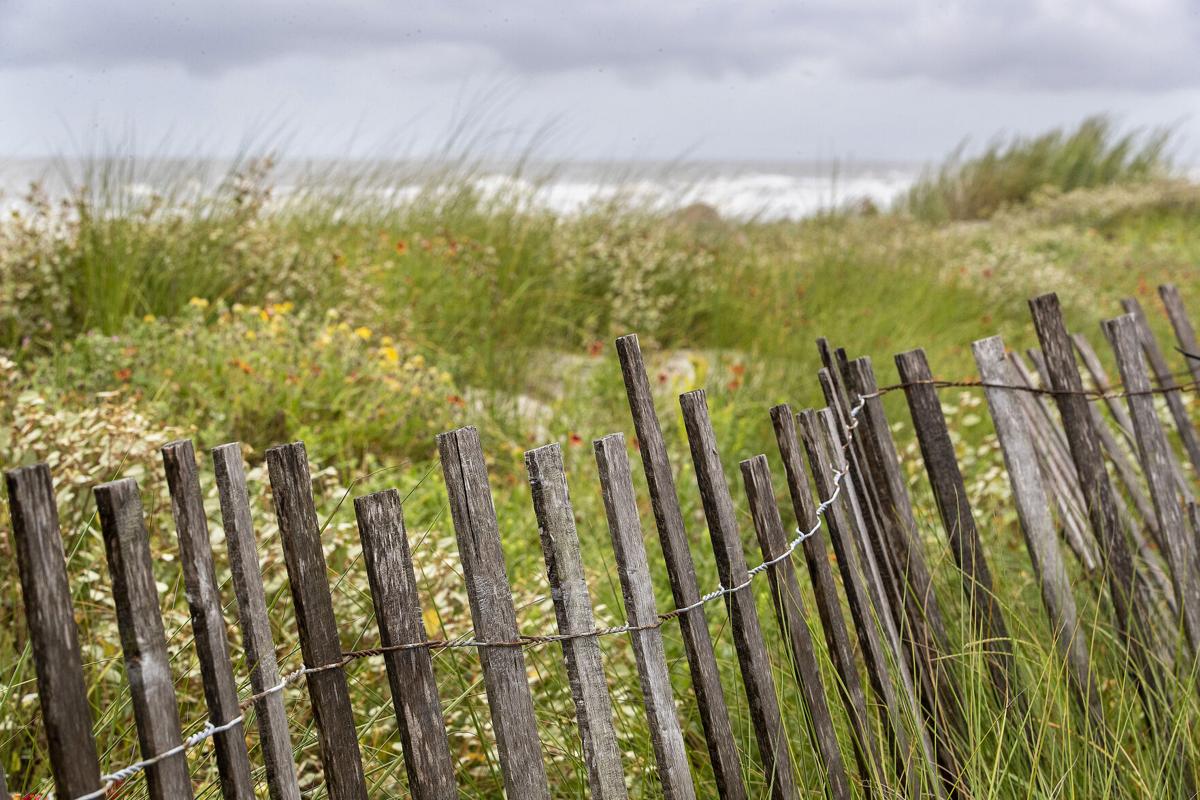 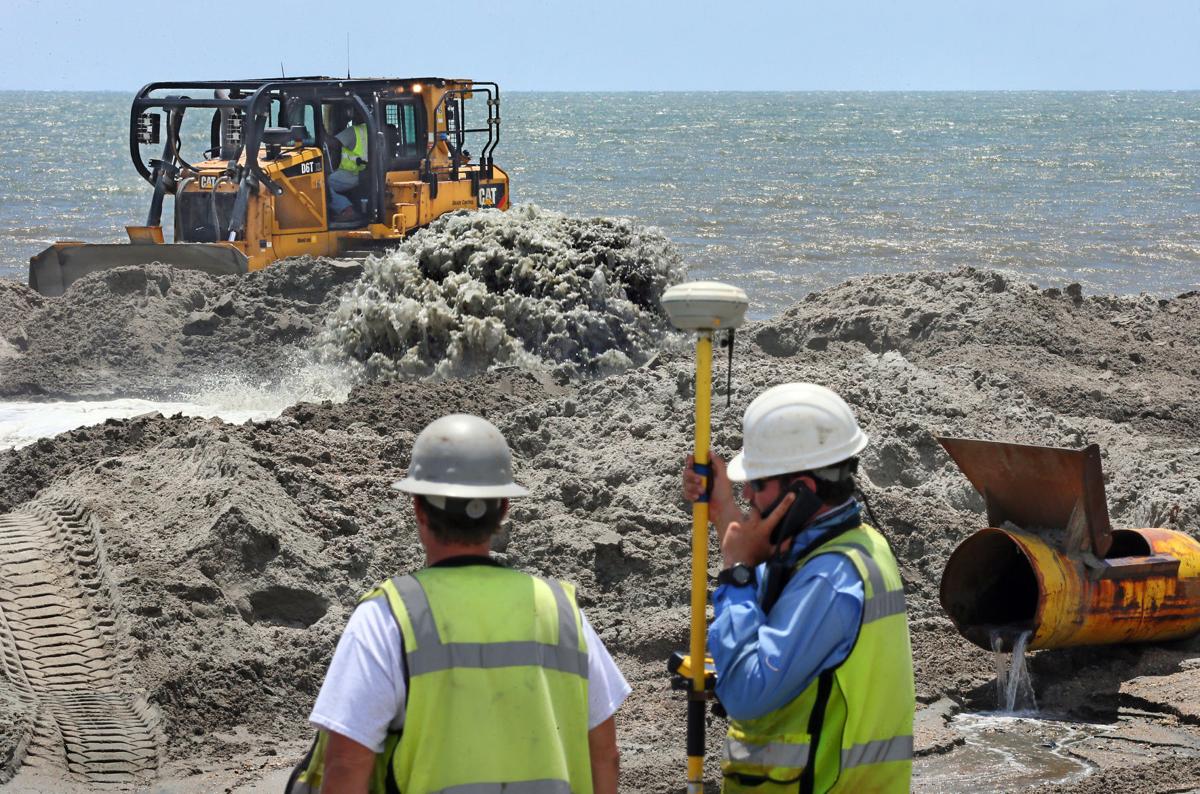 Sand and water gurgle out of a large pipe during Folly Beach renourishment work east of The Washout on Tuesday, July 31, 2018. File/Staff

Storm clouds loom over The Washout at Folly Beach on Sept. 17, 2020. A proposed plan to battle erosion on Folly Beach, released in draft form by the Army Corps of Engineers, would replace an existing outline to put sand back on the beach every eight years since 1993. File/Grace Beahm Alford/Staff

Sand and water gurgle out of a large pipe during Folly Beach renourishment work east of The Washout on Tuesday, July 31, 2018. File/Staff

FOLLY BEACH — A new plan to battle erosion in this barrier island community would include larger beach renourishment projects than in the past and a newly constructed dune that would sit about 7 feet off the ground.

The proposed project, released in draft form by the Army Corps of Engineers, would replace an existing outline to put sand back on the beach every eight years since 1993. That effort was designed to continue through 2043, but has already reached its $88 million federal funding limit.

The Corps is focused on preventing damage to property from coastal storms like hurricanes or nor'easters, but the renourishment plan would also refill a fast-eroding beach that is the driver of economic activity for the coastal town.

The public can submit comments on the proposed beach nourishment plan via email at folly-beach-study@usace.army.mil until Friday, Dec. 4.

The draft plan can be viewed at: bit.ly/2UNDL3f.

The Corps' Wilmington District office will also hold an online session on the plan on Dec. 1. The session can be viewed at: facebook.com/USACE.Wilmington

The new plan would run through 2074, at a total cost of slightly more than $190 million. Accounting for inflation since the 1990s, the federal share of that cost in the new project draft is just 4 percent higher than the previous limit.

Key differences in the new project include:

As before, federal funds would cover 85 percent of the project cost, and the city of Folly Beach would cover 15 percent, or about $28.5 million over the 50-year span.

The feds are paying a higher percentage than is typical because jetties installed by the Corps to keep Charleston Harbor clear have blocked a flow of sand that would naturally arrive at Folly. It's the same reason that directly across the harbor entrance, the beach town of Sullivan's Island has been accreting land, including a controversial maritime forest.

Folly Beach has erosion problems particularly on the northeast stretch of the 6-mile island, known as The Washout. Disappearing sand has uncovered rock or cement groins that are designed to trap sediment from drifting away from the island. In some hot spots, erosion happens at a rate as high as 20 feet a year, according to the Corps report.

The Corps also examined two other alternatives: taking no action, or buying and tearing down vulnerable homes in order to avoid damage from coastal storms. But the agency's analysis found that the modified beach renourishment plan had the best cost-benefit ratio.

City of Folly Beach officials said they are supportive of the proposal to continue pumping sand onto the beach. Some aspects need refining, like the time between renourishment work, said Aaron Pope, city administrator. Even under the shorter eight-year span between work that's already in place, Folly Beach has has several "emergency" projects after storms cause sudden erosion, including the most recent beach fill in 2018.

"The facts on the ground have definitely shown that renourishment comes up more than every 12 years," Pope said.

Nicole Elko, a coastal scientist and consultant for the city of Folly Beach, said the municipality will have the opportunity to refine the details of the plan as the study proceeds. Similar to the city of Charleston's peninsula protection study, this review is a three-year feasibility process with chances to edit the proposal, and even more flexibility once the report is approved.

For example, Elko said, the Corps is required to list multiple "borrow areas," or underwater sites where it could harvest sand to be put back on the beach. The report suggests using a different site for each of the four times it would place fill on the beach.

But if the Folly River, the city's preferred source, refilled with sand between work, the Corps might be able to use that site repeatedly, Elko said.

Folly Beach prefers taking sand from the river bottom because in a 2014 beach-building project, sand sucked up from the ocean floor a few miles offshore also ended up including several large rocks, Elko said. The farther site is also more expensive, because it costs money to transport sand long distances; that project costs about $30 million.

A separate report recently prepared for the Corps underscored the future competition for sand for some beach-building projects along the Southeast, though Charleston County was thought to have ample supplies for the next five decades.

Folly Beach's proposed plan is open to public comment through Dec. 4. After that, the proposal will be refined, and if the Corps and city sign on, it will eventually be sent to Congress for funding.

Pope said that because the city already has an active project, it may be easier to get funding approved again. Corps officials said their goal is to include the project in a 2022 funding bill.

"Once you’ve got that inertia and you’re in there, you kind of become a recurring line item in the budget," Pope said. "So far in the past, we haven't had any significant delays in congressional funding for our projects."

This story has been updated to clarify that Nicole Elko is a coastal scientist.