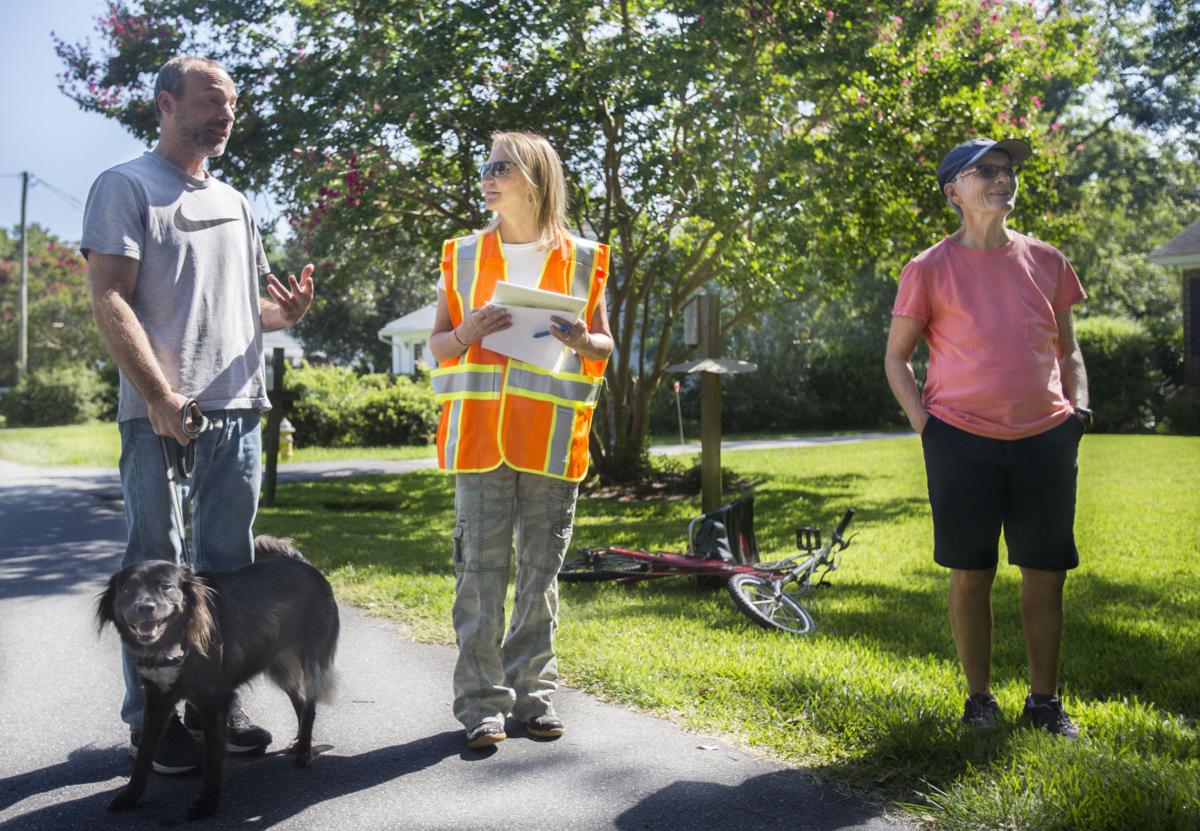 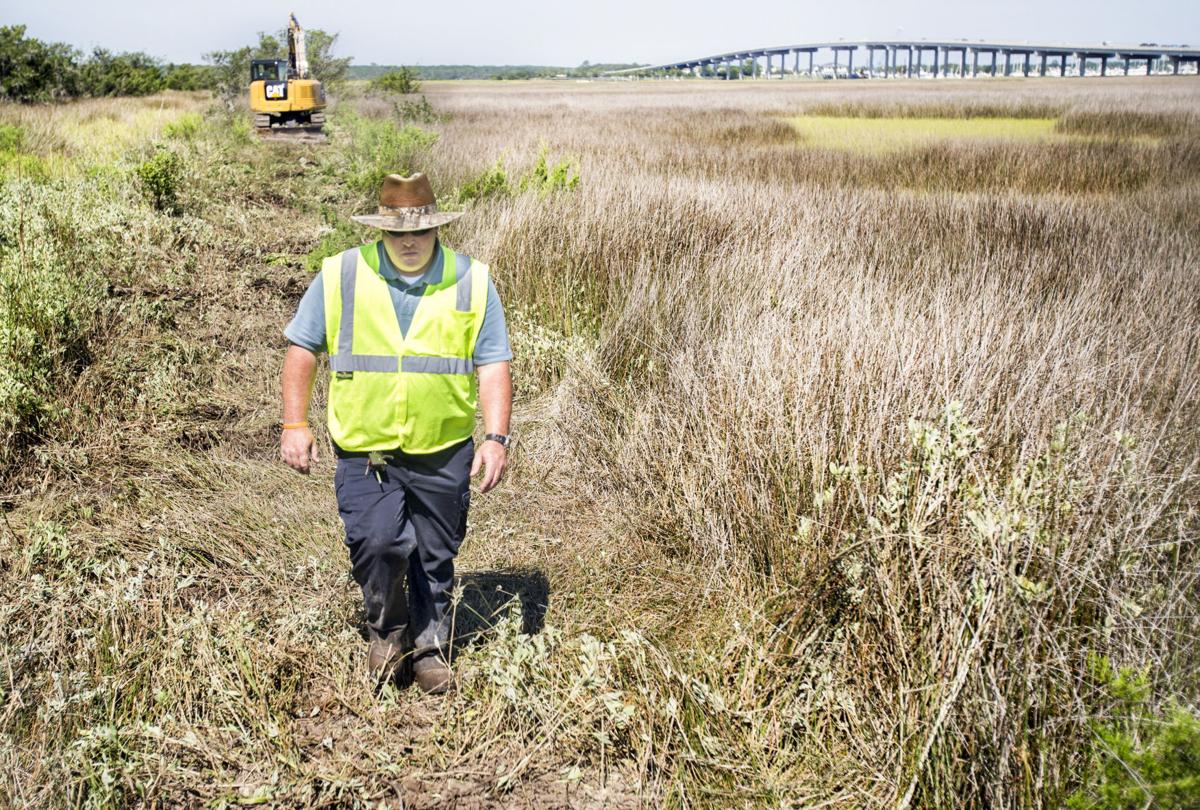 Charleston County workers use a mini excavator to clear a ditch to aid water drainage near Kell Place on Monday, July 29, 2019, in Charleston. Gavin McIntyre/Staff 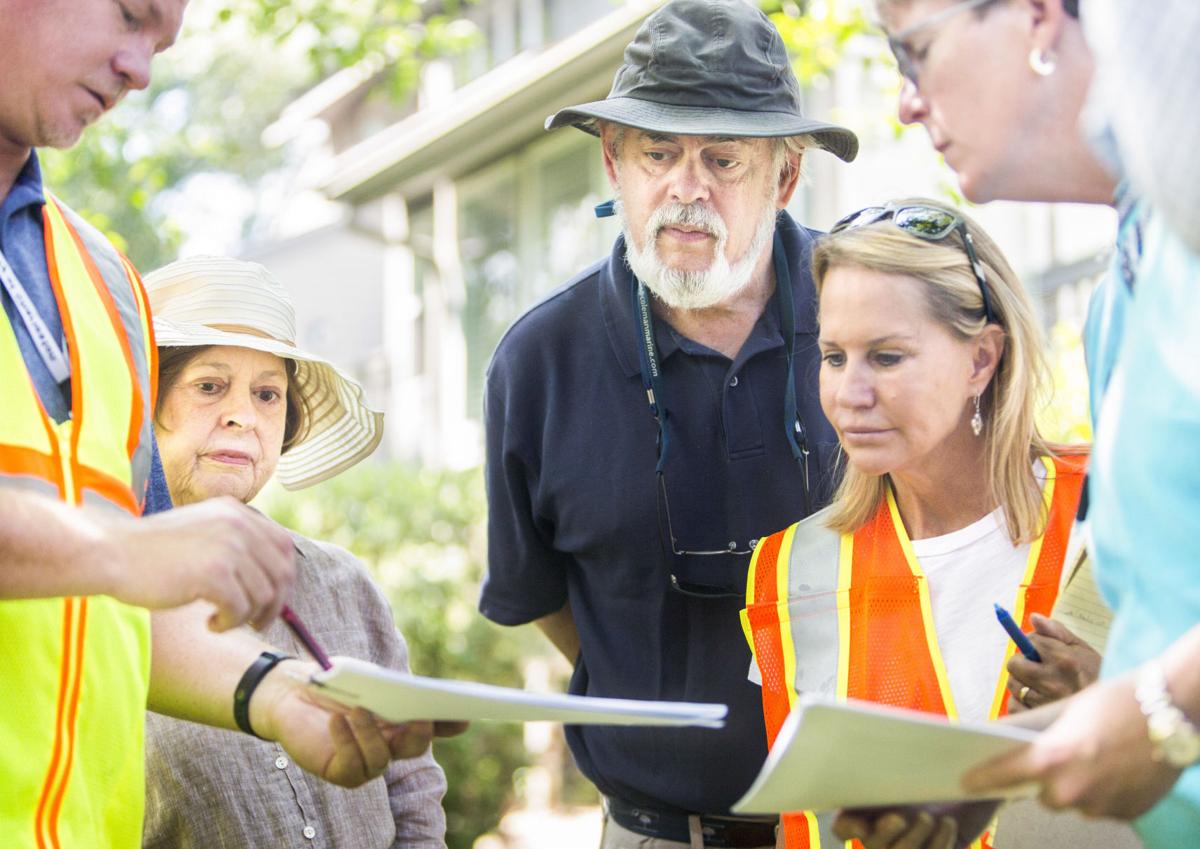 Dottie George (left) and Frank Drayton Jr. look at a map of their neighborhood in Wappoo Creek Place with Sen. Sandy Senn during her flood-prevention task force's neighborhood walk-through on Monday, July 29, 2019, in Charleston. Gavin McIntyre/Staff

More than 100 homeowners in Charleston and Dorchester counties face flooding issues but live in places where many state and local agencies have authority over drainage, and they've turned to a new task force for some short-term help.

The Countywide Intergovernmental Flood Prevention Task Force Committee, a group of state and local political leaders, as well as department heads from city, town, county and state agencies have visited different neighborhoods every 90 days or so to check in on work done and what work still needs to be done.

Their goal isn't to create ambitious drainage projects but rather to make improvements within their existing budgets.

"Whenever people had a bunch of different agencies with easements within their neighborhoods, they couldn't get anything done," said state Sen. Sandy Senn, who created the task force.

"Some neighborhoods have up to five different agencies that have easements and heavy equipment and rights of way, so unless you get out there and have them look at these neighborhoods globally, then nothing ever really gets accomplished."

In the nine months since the task force was created, Senn has documented 44 different flooding issues in her district as successfully addressed.

"If it's something we can fix, the government should be doing that," the Charleston Republican said. "It's simple stuff. As long as we're not going to impact anyone down the road or upstream."

In the Old Windermere neighborhood, resident Walt Flowers said the drain in front of his yard was maintained by the city but fed into another drain maintained by the state Department of Transportation. A blockage there caused water to pool in his yard. After a 2-inch rain caused problems, he began reaching out for help.

Flowers said he heard it was the city, then the county and later DOT that needed to address the issue.

More than 30 municipalities are handling drainage on their own in the Charleston region. To confront the threats of flooding and sea level rise, they will have to get on the same page. One idea is to create a regional flood control district.

"I had basically three entities that my drainage relied on," Flowers said, but the Intergovernmental Task Force looked at the spot and led the state to unclog its drain. "When everyone is there together it's just hard to pass the buck," he said, adding his property hasn't flooded since.

On Monday, the task force visited James Island homeowners on Carol Street, Wappoo Creek Place and Highland Avenue, where flood-related issues are impacted by development or redevelopment of nearby parcels.

Redevelopment at the Charleston Municipal Golf Course has caused concern for homeowners on Carol Street, though residents in that area make the flooding issues worse by throwing leaves into drainage ditches, county officials said. Leaders said they would arrange for vacuum trucks and crews to check and clear the ditches. Work on the golf course should be done within the next six months to a year, and improved drainage is part of the plan.

Ruth Yack and Joanne Dixon, who have lived on Carol Street for several years, said new development has exacerbated their flooding issues. Dixon said she hopes the new task force will meaningfully address the high flooding that has reached her knees after a heavy rain at high tide, but will "believe it when (she) sees it."

Part of the drainage issues Carol Street residents see is due to an old and underutilized outflow ditch to the Stono River. Jim Neal, Charleston County's director of Public Works, has an excavator working on the ditch behind Kell Street.

On James Island, where four different agencies could be involved in one neighborhood at a time, Town Administrator Ashley Kellahan said Senn's idea isn't new, but the senator's involvement has brought a new level of accountability to DOT. She said the town and other local agencies have met monthly since 2013 to talk about drainage issues on the island.

"It's worked brilliantly because the leaders of all the local and state agencies worked together," Senn said.

Senn said she doesn't think that a water board, similar to the setup in the Netherlands, would be feasible in South Carolina, given the Home Rule Act.

While the new task force doesn't have authority to fix issues on private property, an issue that Senn has seen in some neighborhoods, it has worked in others.

"So many people just stress every rain," she said. "When we do get things working properly, it takes their blood pressure down and not having to worry about what's happening in their homes."

South Carolina's Floodwater Commission is puts forth suggestions long made by environmentalists: that planners should work to preserve wetlands and prepare for flooding on a watershed level.