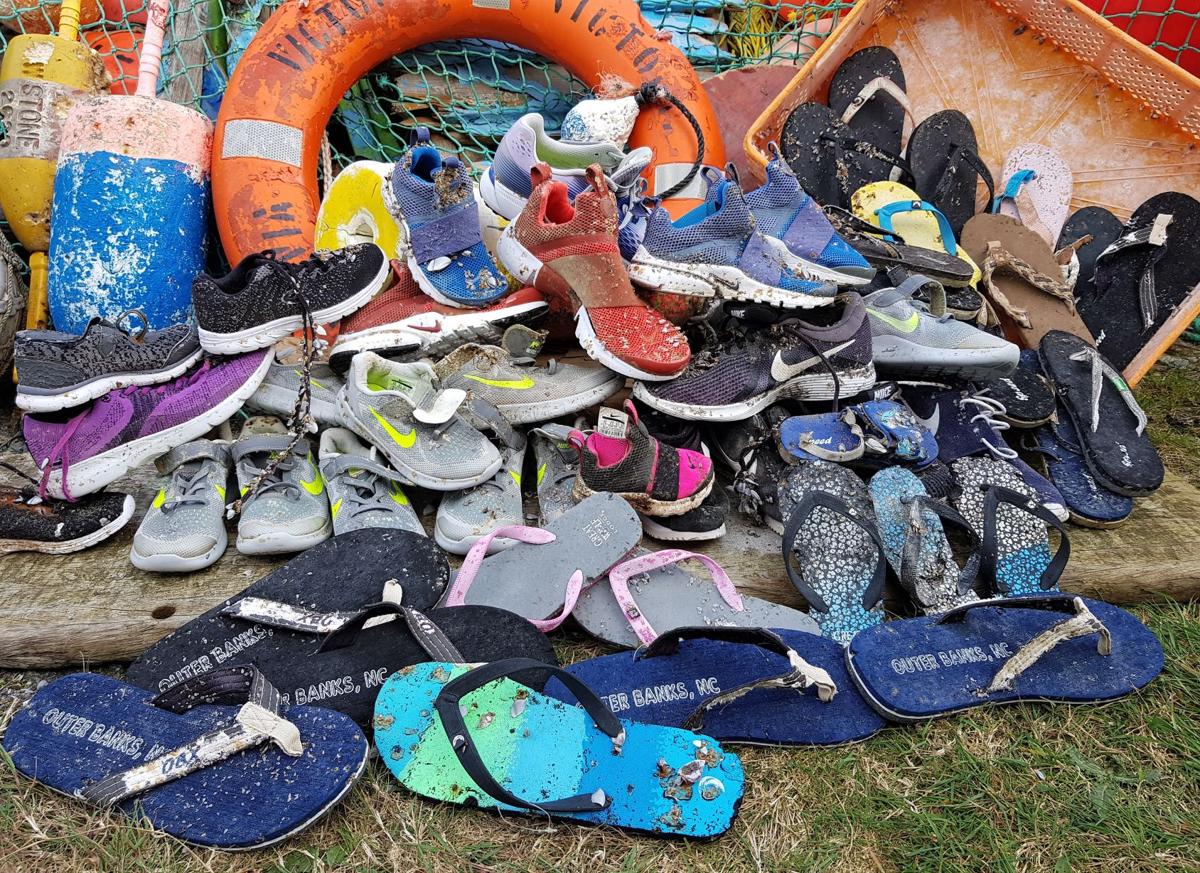 Irish beachcomber Liam MacNamara has found about 100 flip flops or running shoes on the beaches of County Clare. Provided by Liam MacNamara 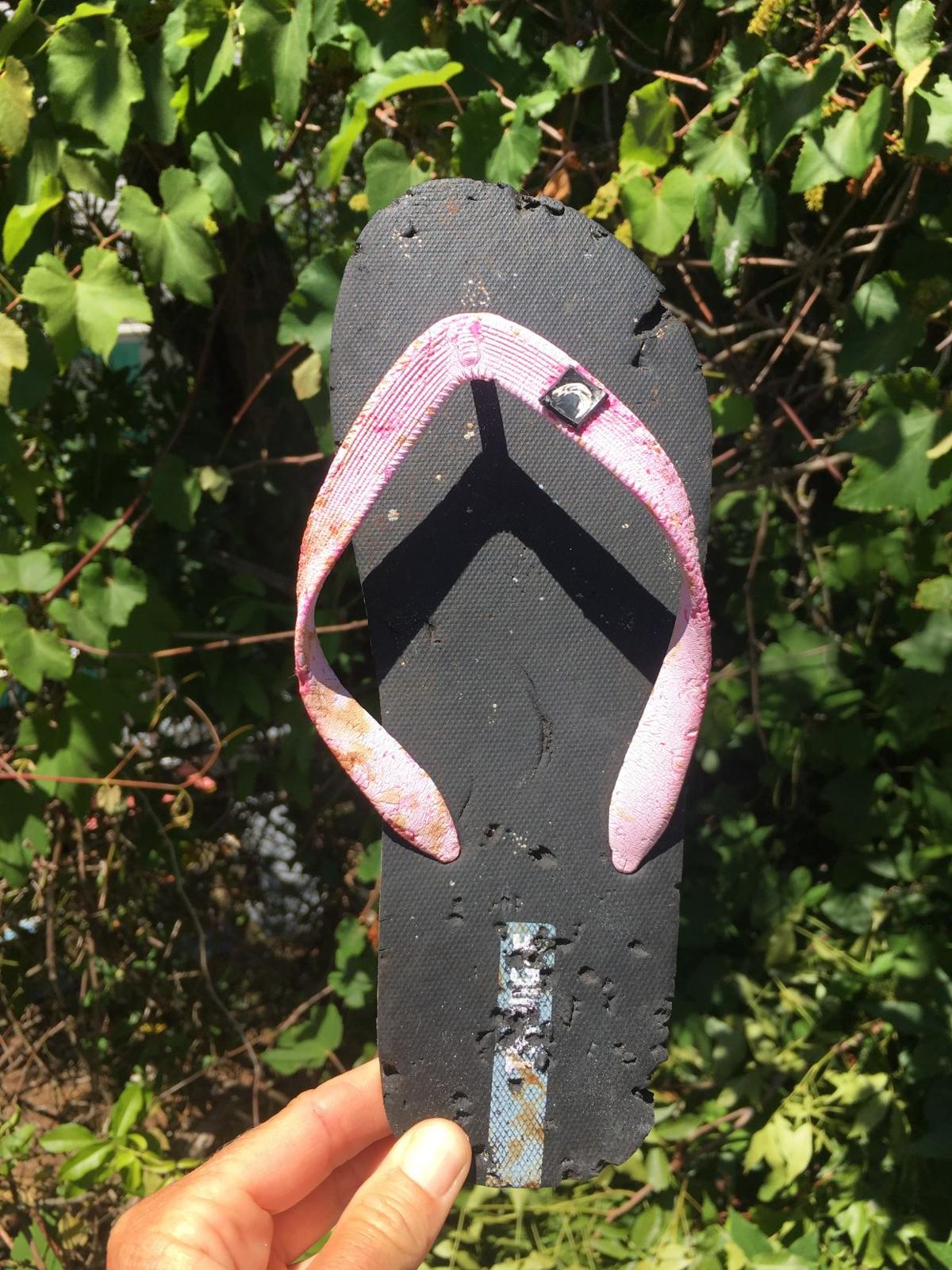 More than a year after a container ship spilled footwear off North Carolina, a flip flop with the logo of one of the companies washed up in Eleuthera, Bahamas. Provided by Heather Cremia

Looking to score a nice new set of flip flops or running shoes this summer? Head to the beach.

Scrape off the barnacles. Wipe off the slime. These beauties could be right off the boat — the Maersk Shanghai that lost containers full of gear like it off North Carolina.

The only real hitch is you'll likely have to find them one at a time. But the gear might well be out there — or headed this way.

Since the containers spilled last year, more than 100 flip flops and shoes have shown up on beaches across the Atlantic, from Ireland to the Bahamas.

There haven't been any confirmed sightings in South Carolina, but litter clean-up crews don't keep track of individual footwear or brands they find.

And they find plenty of footwear. The problem is, they find it all over the place. Howard Hogue, the Isle of Palms' Beach Santa litter collector, has found flip flops as far off the beach as the municipal parking lot.

"Flip flops have always been a problem. We typically get a lot of clothing and shoes in litter sweeps. It's creepy how many people lose their clothing and shoes," said Kelly Thorvalson, the South Carolina Aquarium conservation programs manager who oversees the aquarium's Litter-Free digital reporting app.

The Shanghai was traveling from Norfolk, Va., to Charleston in March 2018 when it lost 76 containers during a Northeaster in hurricane force winds and 40-foot swells, according to the Maritime Executive.

Much of the early concern focused on a container holding 5,900 pounds of sulfuric acid. No sign of spill from that has been found.

The company acknowledged but didn't respond to an email query from The Post and Courier.

Irish beachcomber Liam MacNamara found a flip flop first, in March 2019 on a County Clare beach. The sandal caught his eye because it had a distinctive "Outer Banks" logo, a place he had visited and loved. Since then he's collected about 100 flip flops or running shoes.

"The bulk of which carry the Nike brand," he said. "Through a network of other beachcombers in other countries we discovered that these runners and flip flops were turning up all over the place — not only up and down the west coast of Ireland but also in England, France, Spain, Portugal and even The Azores."

Earlier this month, North Carolina beachcomber Heather Cremia found a lone flip flop with one of the lost-container designs on a beach in Eleuthera, Bahamas.

Given the North Atlantic Gyre, a vast clockwise circulation of currents around the ocean that the Gulf Stream is part of, the footwear could well be headed to South Carolina beaches.

In the vast garbage patches of trash in the ocean, the shoes don't amount to much. Studies have estimated people dump anywhere from about 5 million to 13 million metric tons of plastic per year that ends up in the ocean, according to the Smithsonian Institute.

It's enough to fill every foot of every coastline in the world with five grocery bags, the Institute reported.

Cargo ships lose shipping containers because of crew mistakes, high winds, or storms at sea, according to the Smithsonian Institute. More than 10,000 containers are lost each year, an average of about one per hour.

Each shred counts. Some seven tons of plastic or rubber litter float in Charleston Harbor at any given time, according to research by The Citadel — everything from tire shreds to drink bottles.

Collapsed balloons resemble jellyfish, and marine creatures such as sea turtles feed on jellies. Species from turtles to whales have washed up dead with their digestive systems choked by plastics. The stuff has been found in creatures from shrimp to humans and the long term health consequences aren't known.