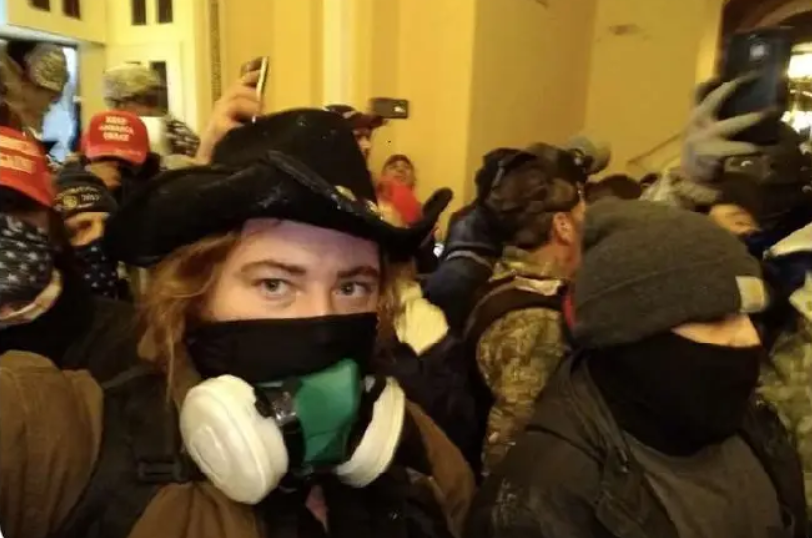 The FBI alleges this is a photo of Andrew Hatley wearing a cowboy hat and gas mask during the Jan. 6, 2021, riot at the U.S. Capitol in Washington, D.C. Hatley has been charged with participating in the riot. Source: FBI complaint 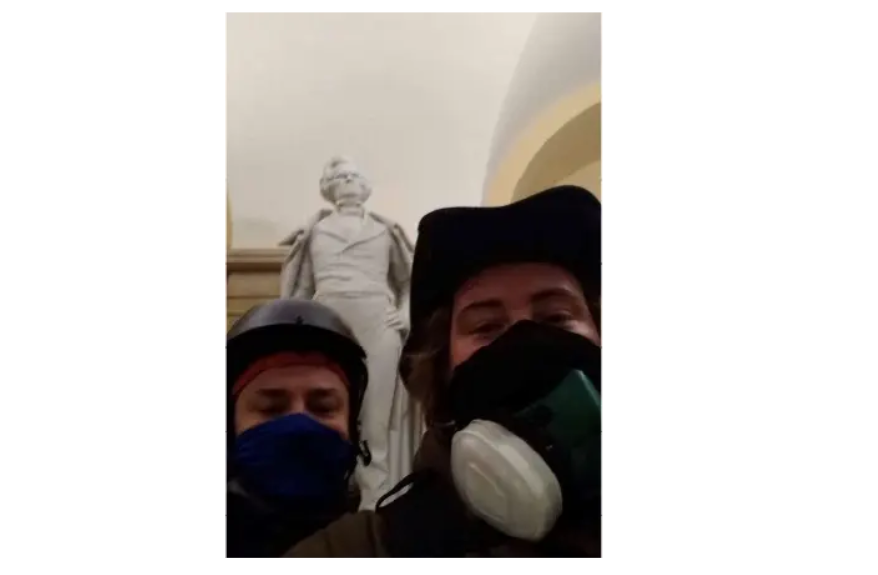 The FBI says this is a selfie Andrew Hatley took in front of the John C. Calhoun statue at the U.S. Capitol building. Source: FBI complaint

COLUMBIA — A South Carolina man has been charged with participating in the deadly riot at the U.S. Capitol earlier this month, according to federal authorities whose investigation relied on GPS data and a selfie the man allegedly took while inside the building.

In a Jan. 15 complaint, the FBI alleged Andrew Hatley drove a red Ford Mustang from his South Carolina home to Washington, D.C., to join the thousands of President Donald Trump supporters who planned to protest the results of the 2020 presidential election, which Democrat Joe Biden won.

Hatley joined the violent mob that attacked police and overtook the Capitol building, the seat of the U.S. government, as Congress was certifying the election results, according to the complaint.

Hatley is the first known South Carolinian to be charged with a crime related to the Jan. 6 riot, which briefly delayed Congress' certification of the election.

The fallout from the riot continues to expand. Trump last week became the first president in U.S. history to be impeached twice after the U.S. House charged him with inciting violence against the government.

Statehouses across the country, including South Carolina's, have bolstered security measures ahead of Biden's inauguration on Wednesday in response to the FBI's warning of possible armed protests.

A man was arrested Sunday and charged with unlawfully carrying a handgun just two blocks from the S.C. capitol. Also on Sunday, the State Law Enforcement Division arrested a Pickens County man on charges of possessing a deadly explosive. Authorities did not say if either arrest was tied to inauguration protests, but they come amid the highest vigilance by authorities ahead of Wednesday's historic event in the nation's capital.

Hatley was charged as federal authorities continue to round up scores of people from across the country who participated in the Jan. 6 riot.

The FBI has asked for the public's help in identifying people who posted pictures or videos of themselves to social media as they attacked police and ransacked the Capitol building.

Hatley was first identified by a tipster, according to the FBI's complaint.

The tipster provided the agency with a selfie that Hatley allegedly took in front of the Capitol building's statue of former Vice President John C. Calhoun, a pro-slavery South Carolinian who advocated for state's rights ahead of the Civil War, the FBI complaint stated.

The man in the photo is wearing a mask that makes it more difficult to confirm his identity. But he is also wearing a cowboy hat that appears similar to a hat Hatley is wearing in another photograph the FBI obtained, according to the complaint.

A day after the riot, Hatley went on Facebook to deny participating. He posted that someone who looks like him was seen at the Capitol, but added that he doesn't "have that kind of motivation for lost causes."

"I just don't care enough anymore, certainly not enough for all that," Hatley wrote.

But the FBI used data from a GPS location app Hatley used to pinpoint him inside the Capitol building during the riot, according to its filing.

When the FBI called Hatley and asked him about the Jan. 6 riot, he said "he was not sure how much he should say without legal counsel because he could be in a great deal of trouble," according to the complaint.

A trio of potential numbers for Hatley had been disconnected by Monday morning. He did not return a message left on his Facebook account. A hometown for Hatley was not listed in FBI documents.

A man who answered the phone at Senn Freight Lines, the Newberry trucking company that Hatley lists as his employer on Facebook, said "we will have no comment" before hanging up.

The arrest follows a pledge from U.S. Attorney for South Carolina Peter McCoy that any South Carolinians who traveled to Washington to participate in the riot would be prosecuted.

It was unclear Monday morning what involvement McCoy's office had in Hatley's arrest or will have in his prosecution. A spokesman for the office would not comment on Hatley's case. The investigation was conducted out of the FBI's Washington field office, an FBI spokesman in Columbia said.

It is unclear whether Hatley is in federal custody. FBI officials in Washington would not comment on the case.

Hatley was charged with four federal crimes. Those alleged crimes are: 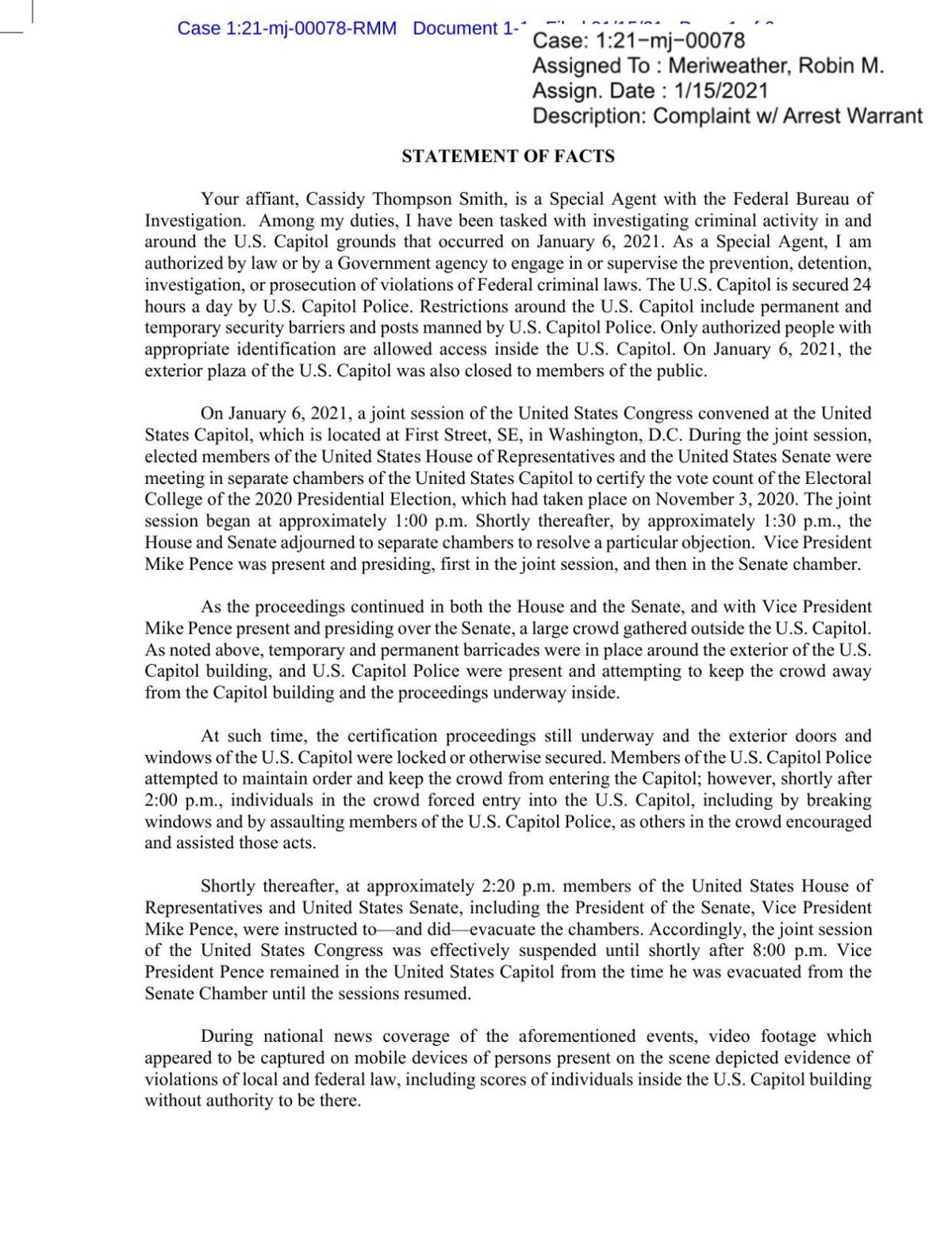