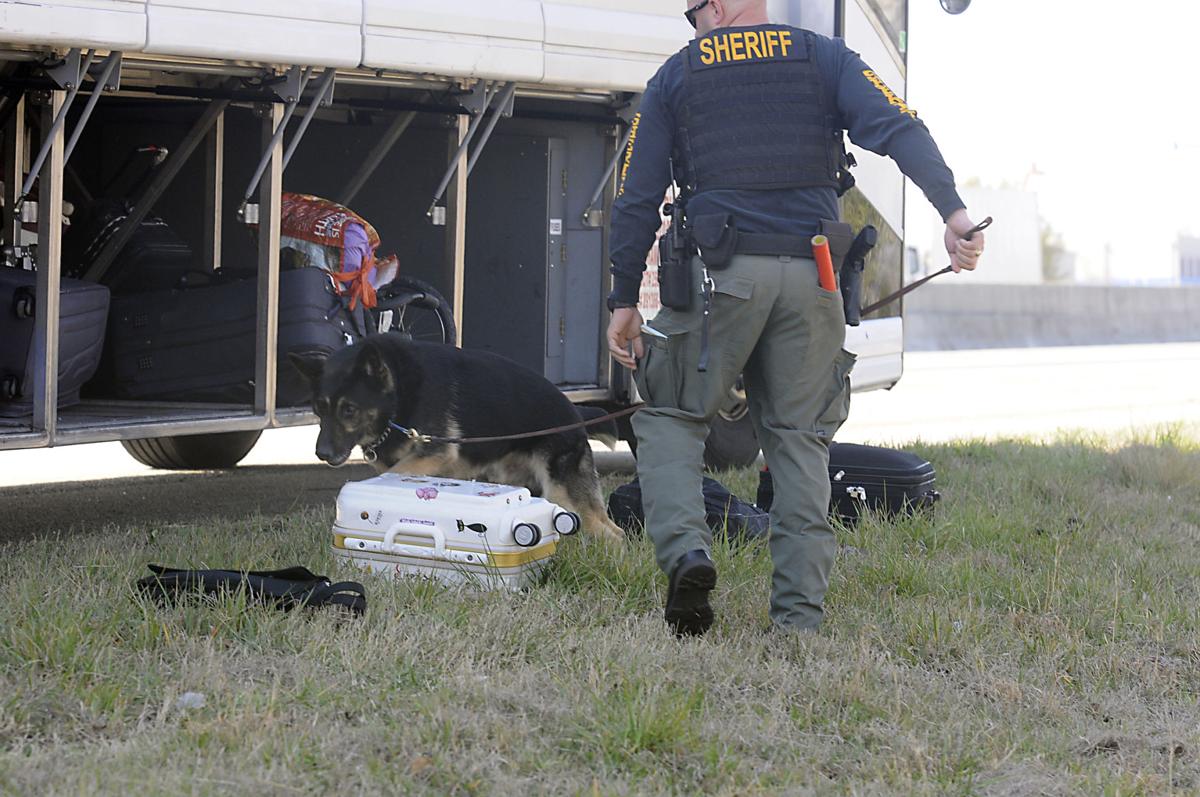 Police with a drug-sniffing dog inspect the luggage carried by a tour bus in March during "Rolling Thunder," an annual week-long operation by the Spartanburg County Sheriff in which federal, state and local authorities stop vehicles on Interstates 85 and 26. In 2017, 1,110 vehicles were stopped and 158 were subsequently searched, in some cases leading to seizures of drugs, cash and contraband such as counterfeit goods. Alex Hicks Jr./Spartanburg Herald-Journal 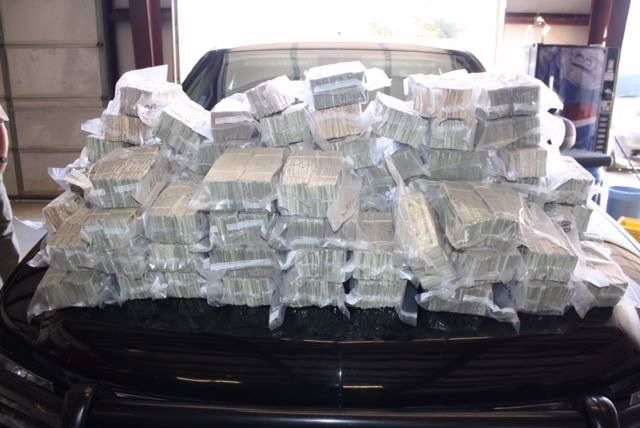 This is the Hampton County Sheriff's Department's photo of $1.7 million in cash seized after a 2015 traffic stop. Provided 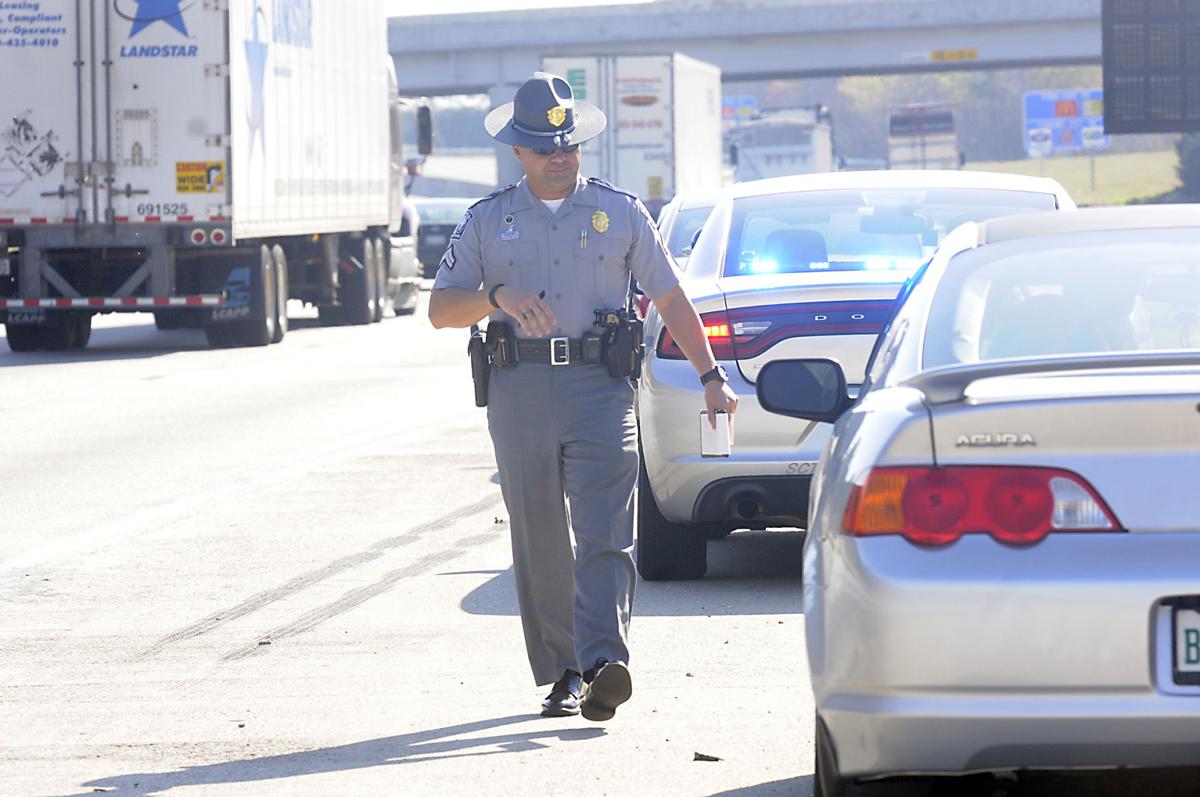 When Hampton County sheriff’s deputies found $1.7 million stashed in secret compartments of a sport utility vehicle during a traffic stop on Interstate 95, the department confiscated the money and the SUV. The driver walked away with no criminal charges.

The driver “denied any knowledge of the money, and we had no way to connect it to him,” said Hampton County Chief Deputy William Jarrell. “He got a traffic ticket and we pointed him at the bus station.”

The case marked the largest civil asset forfeiture in South Carolina in 2015, but there have been others like it. That police kept the money while no one was charged with a crime also is not unusual.

Civil asset forfeitures allowed under federal law have drawn critics across the political spectrum because of concerns about civil rights, due process and the financial incentive this tactic creates for police. If money or property is seized, it's up to the owner to claim it and fight to get it back. The owner must bear the cost of a lawyer, and the burden is on them to prove there's no connection to criminal activity.

Law enforcement officials defend these confiscations as a crucial weapon in the War on Drugs, hitting drug traffickers in their wallets while generating money for police budgets. South Carolina police agencies raked in $4.3 million through federal forfeitures in the 2015 budget year, and slightly more the year before that.

Every year in Spartanburg County, the Sheriff's Office organizes a week-long crackdown on Interstates 26 and 85 involving multiple local and federal agencies. They call it "Rolling Thunder."

During the March operation, deputies and their colleagues pulled over 1,110 motorists — the majority of whom were black or Hispanic — mostly for infractions such as making improper lane changes or following too closely. Police searched 158 vehicles, including large tour buses. Drug-detecting dogs sniffed around 105 vehicles, and the tour bus luggage, sometimes justifying thorough searches.

Just eight felony arrests were made, but police found and seized 233 pounds of marijuana, nearly 8 kilos of cocaine, 164 ounces of heroin, more than 4,800 prescription drug items, 65 grams of methamphetamine, $139,320 in cash and counterfeit consumer products.

"The proof is in the pudding," said Sheriff Chuck Wright told The Spartanburg Herald-Journal.

Maybe so, but the operation is not without it's critics. In May, Wright's office reached a settlement with a North Carolina man who was stopped during Rolling Thunder in 2016 and later sued the sheriff. Eamon Cools-Lartigue hadn't been charged with a crime — or even given a traffic ticket — but police seized more than $20,000 in cash from him. Details of the settlement were not disclosed in court filings, and his lawyer did not return several phone calls from The Post and Courier.

State laws typically set a higher burden than the federal government for seizing assets. Some states, such as North Carolina, prohibit asset forfeiture unless criminal charges are filed, and South Carolina requires a marginally higher burden of proof than federal laws. But police can still tap into the federal forfeiture rules. And by doing so, they may also keep a larger share of seized cash.

By working with a joint federal task force, as in Rolling Thunder, or having federal authorities adopt a seizure case after the fact, as with the Hampton County secret-compartment vehicle, the forfeiture falls under federal law. That means law enforcement officials can seize cash suspected of being drug-related even if drugs aren't found and a criminal connection hasn't been clearly established, although South Carolina's laws wouldn't allow that.

The U.S. Department of Justice adopted the Hampton County case, kept part of the money and sent the rural Sheriff's Office a check for $1,252,731. The department bought seven new cars and trucks, and a building, among other things. The Hampton County Sheriff’s Office's share of the seizure amounted to 29 percent of the federal forfeiture cash distributed in South Carolina for that year.

"It was a great help here,” Jarrell said. “We bought a lot of equipment and actually added a building next to the sheriff’s department.”

For some police departments in South Carolina’s small towns and rural counties, interstate highways are like popular fishing holes, but for drug money. Every car pulled over for following too closely or changing lanes without signalling is like a scratch-off lottery ticket — long odds, but with the potential for a big drug bust or a huge cash prize.

An amazing amount of money

An interstate traffic stop by the Ridgeland Police Department in 2013 resulted in South Carolina's largest federally sanctioned cash seizure for that year.

Less than 4 miles of I-95 runs through the small Jasper County town, and for the police department, that little stretch of interstate has been a cash machine. Ridgeland’s population is only about 5,000, “if you count the prison,” Police Chief James Woods said, but police there have seized more than $6 million in forfeitures since 2002.

It’s been enough money to pay for the department’s vehicles, equipment and training for 15 years, since the interdiction effort began.

As in the Hampton County case, the Ridgeland police stopped a car on I-95 for a traffic violation. The vehicle was searched after a drug-sniffing police dog alerted, Woods said, and while no drugs were found, there were large boxes full of cash in the trunk — $1.75 million.

"The driver of the vehicle had no knowledge of the money,” Woods said.

And so, as in the Hampton County case, the driver got a traffic ticket and the police got the money.

"That’s an amazing amount of money — more money than I’ll make in a lifetime — and this guy had it in his trunk and knew nothing about it,” said Woods. “We never heard from him again. I’m sure somebody was pissed off, somewhere.”

The war on drugs

The modern federal asset seizure program was created during the Reagan era as part of the same War on Drugs that sent the federal prison population soaring, and it has faced increasing criticism as the amount of money seized increased.

"While many of these forfeitures involve people who have committed crimes, startling stories continue to surface of cops and prosecutors seizing homes, money, and cars on dubious grounds and leaving innocent victims in their wake,” The Heritage Foundation said in a 2015 report that was endorsed by several conservative political action organizations. “As abuses abound, it has become clear that the system is broken and is in dire need of reform.”

Over the past 10 years, forfeitures through the Justice Department’s Asset Forfeiture Program amounted to more that $28 billion, the agency’s Office of Inspector General reported in March. The Drug Enforcement Administration accounted for 80 percent of cash seizures, but in most cases, those forfeitures did not lead to arrests or aid investigations, the OIG report said.

The OIG reviewed a sampling of cases and concluded that about two-thirds of DEA seizures that resulted from drug interdiction operations did not advance ongoing investigations, result in new investigations, lead to arrests or lead to prosecutions.

Notably, the OIG report also found that when the financial incentive for law enforcement was reduced — when the federal government eliminated some opportunities for state and local law enforcement to claim “equitable sharing” money in late 2015 — the DEA cash seizures fell by more than half.

"The tip of the spear has just been blunted — it’s got no point now," Charleston County Sheriff Al Cannon said at the time.

The Criminal Division of the Department of Justice filed a response to the OIG report that criticized the data relied upon (“a small, outdated sample”) and the conclusions, calling asset forfeiture “a vitally important law enforcement tool.”

While there are plenty of incidents involving huge stashes of cash that no one will admit to knowing about, and cash demonstrably tied to drug trafficking, there have also been examples of law-abiding citizens relieved of their cash on the flimsiest of pretexts.

An oft-cited example is Matt Lee, a 31-year-old college graduate with no criminal record who was stopped while driving to California for a new job, carrying more than $2,000 cash from his parents. What happened next was reported by The Washington Post, turned into a cartoon strip in the Heritage Foundation report and referenced in a John Oliver television segment.

A sheriff’s deputy in Arizona pulled Lee over, searched his car and took his money, telling him they had concluded he was driving from Michigan to California to buy drugs. It took a lawyer and about two years to get the money back — or what remained of it after legal expenses.

Earlier this year, bills were pending in Congress and about three dozen states to make changes to state and federal asset forfeiture laws. So far, however, the federal efforts haven't gained much traction, and reform proponents expect little help from the Trump administration.

In a February meeting with county sheriffs, President Donald Trump voiced support for civil asset forfeiture laws and, Reuters reported, “some of the sheriffs laughed when Trump suggested he might want to 'destroy' the career of one Texas legislator” who had proposed reforms.

A bipartisan pair of South Carolina lawmakers are pushing legislation to eliminate civil asset forfeiture under state law and bar local law enforcement agencies from transferring cases to the federal government in an effort to get around the state forfeiture law.

Rep. Todd Rutherford, a Columbia Democrat who co-sponsored the bill, said federally sanctioned civil asset forfeiture has led to racial profiling on the interstates that run through South Carolina.

"A black or Hispanic male in a rental car, especially if there are two of them, that’s become probable cause for a stop," said Rutherford, a former prosecutor who now works in criminal defense.

Woods, the Ridgeland police chief, said he can see both sides of the issues and understand why groups like the ACLU are "jumping up and down about this." But Woods also has seen the practice benefit his small department while disrupting major drug-trafficking. Sometimes they find drugs — 32 kilos of cocaine in one stop 15 years ago — and other times it’s cash, he said.

The police chief said his department doesn’t seize money without good cause.

“We’ve always been very selective,” Woods said. “My personal philosophy; if there’s ever a doubt, I don’t want my department to be tainted."

Police typically stop motorists for minor traffic infractions, and that often leads to vehicle searches, usually with the driver's consent or because a drug-sniffing police dog alerts on the car. Sometimes the police find drugs, and sometimes they find suspicious amounts of cash. By tapping into federal forfeiture rules, police agencies can keep a large share of the seized cash.

The South Carolina police agencies which received the largest paydays through the federal forfeiture system in 2015 were: