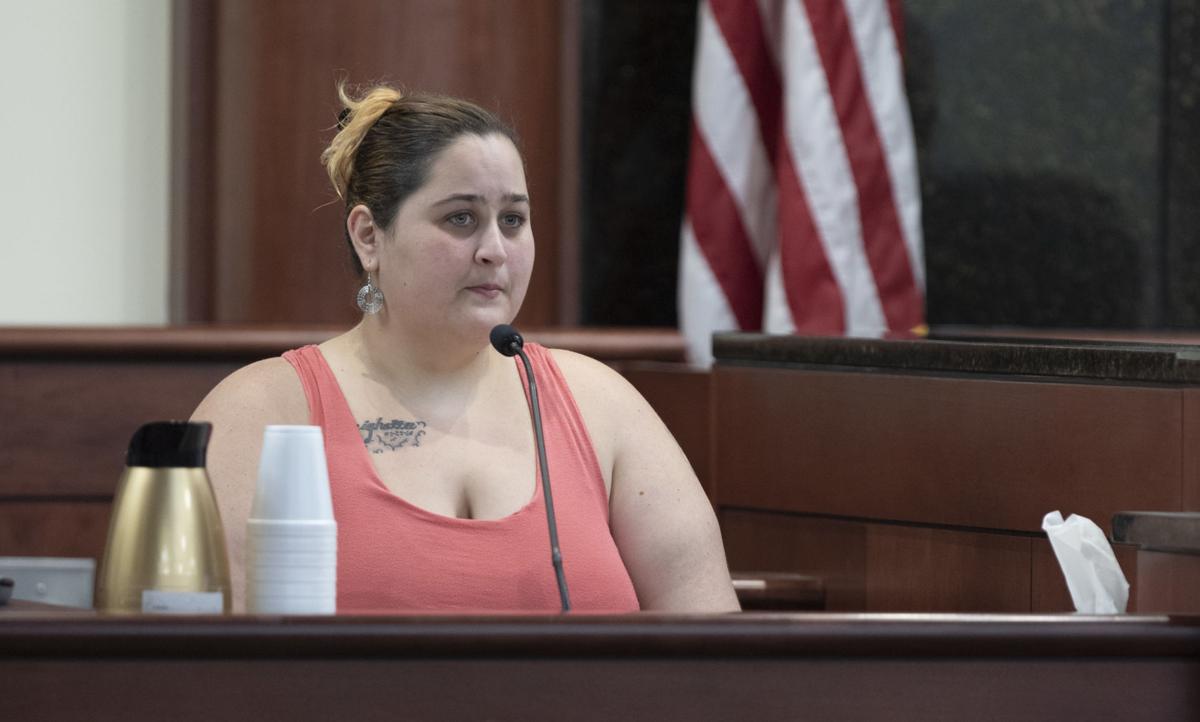 Chrystal Ballentine, a former babysitter and girlfriend of Timothy Jones Jr., answers questions during his trial in Lexington. Jones is pleading not guilty by reason of insanity after killing his five young children in 2014. The State/pool 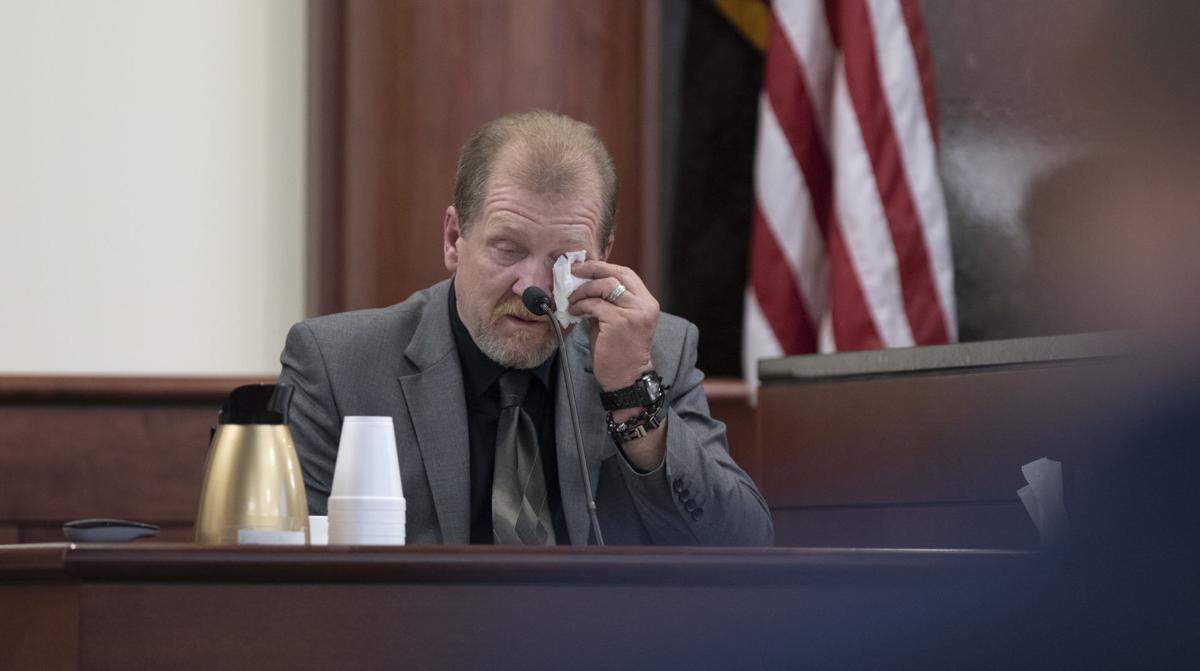 Tim Jones Sr. wipes his eyes Wednesday, May 29, while answering questions during the trial of his son in Lexington. Timothy Jones Jr. is pleading not guilty by reason of insanity for killing his five young children in 2014. The State/pool

Chrystal Ballentine, a former babysitter and girlfriend of Timothy Jones Jr., answers questions during his trial in Lexington. Jones is pleading not guilty by reason of insanity after killing his five young children in 2014. The State/pool

Tim Jones Sr. wipes his eyes Wednesday, May 29, while answering questions during the trial of his son in Lexington. Timothy Jones Jr. is pleading not guilty by reason of insanity for killing his five young children in 2014. The State/pool

LEXINGTON — Timothy Jones Jr., who faces the death penalty for killing his five children, is a "sick man" who inherited his mother's mental illness and got entrenched in cult-like interpretations of the Bible that led to a disastrous marriage and eventually doomed his entire family, his father told jurors Wednesday.

Tim Jones Sr. said the man he helped investigators question in September 2014 about his grandchildren's whereabouts was not the son he knew, though he recognized the crazed look.

"This was the Tim I was scared I was going to see someday," said Jones Sr., who testified about finding his ex-wife cutting up "everything she owned" with a knife, then disappearing with Timmy for months before he eventually won custody when the child was 2½ years old. Neither he nor his son saw her again for more than two decades, when Jones Sr. arranged a visit from where she was institutionalized in Syracuse, New York, because his son wanted to meet her.

"Cindy has a look I don’t know how to explain. I seen it when I was a young man," said Jones Sr., who dropped out of high school to support his teenage wife and child. "You have to live it and know it to see it, that’s all I can tell you folks."

Jones Sr. was expecting a reunion with his son and grandchildren, as they were supposed to spend Labor Day weekend in Mississippi, when the children went missing.

"If there's five kids dead, somebody's got to be (expletive) crazy," he told Solicitor Rick Hubbard shortly before the trial's 11th day adjourned. His testimony will continue Thursday morning.

Jones Jr. does not dispute killing his children — ages 1, 2, 6, 7, and 8 — in their trailer in rural Lexington County on Aug. 28, 2014. After his arrest at a traffic checkpoint in rural Mississippi, he eventually confessed to dumping their bodies in black garbage bags along a logging road in Alabama — on his way to gamble in Las Vegas — after driving around the Southeast with their bodies in his Cadillac Escalade for nine days.

Jones Sr. said he was intentionally trying to make his son mad during the interview so he'd stop lying. That's when his son put his hands toward his throat and said, "I could kill you," but never actually touched him and instead started crying.

Jones Jr. is pleading not guilty by reason of insanity. His defense team argues he has a schizophrenic disorder, undiagnosed at the time.

It's unclear how the middle child, six-year-old Nahtahn, died. But Jones insists he died accidentally from overexhaustion following an hour of required exercises for punishment, sending the single father into panic mode, prompting voices in his head telling him to kill. He strangled the oldest two with his hands and the youngest two with a belt.

Jones Sr. called his son just three days before their deaths, after his mother and stepfather had an overnight visit with them in Atlanta and warned Jones Sr. something was wrong.

"My mom told me it was time to intervene, and I did," he said.

Not that his son has listened before.

Jones Sr. said he warned him not to marry Amber, a homeless teenager looking for stability. They met at a Chicago amusement park shortly after Jones Jr.'s release from a one-year jail stint for drugs and vehicle theft. Jones Sr. said his son came out a "religious freak" who "married her to sleep with her," and then expected her to be a subservient wife who couldn't wear pants or makeup or cut her hair — an ideology he told his son would never work.

He also told him "you don't need more kids," as his first three came while he was still in college.

"I thought he was crazy. You've known this girl a couple of days and you want to marry her?" he said. "The religious thing was off the charts. Amber was even crazier for staying with him."

When Amber did leave in 2012 for a neighbor's teenage son, Jones Sr. said he didn't blame her, but he was shocked she didn't want the children. His son never stopped wanting her back.

Jones Sr. said neither his son nor Amber were equipped to be parents, and the best part of the children's lives was when they stayed with their grandparents in Mississippi the summer of 2012, and his son drove to see them every weekend, returning to his job at Intel by Monday morning.

"We tried to make it perfect for them. I’m a much better grandpa than a father," he said, adding that taking the children from his son wasn't an option. "If I tried to take Timmy’s kids, he might kill me because he loves them so much. It would be hard to take his children."

His son wanted to prove he was a better dad, Jones Sr. said, and "God knows, I was OK with that."

Jones Jr. grew up in chaotic households, as Jones Sr. acknowledged both he and his mother were violent to their spouses, and he drank heavily following the death of two siblings.

Despite what his son did, he said, "I love my kid more than anything."

Earlier Wednesday, Jones Jr.'s ex-girlfriend, who temporarily babysat the children after Amber left, said he whipped his children so hard, she could hear it through the walls.

"He was over-angry. He should’ve calmed himself down before he took discipline actions," Chrystal Ballentine told jurors. "I could hear it and couldn’t do nothing about it. Every time I did, we’d get in a battle. It caused a lot of conflict."

The beatings also caused bruising, she said. She walked out in summer 2013 when "he looked like he was going to whip" her daughter, who was less than a year old at the time, for knocking over a drink or something similarly minor. It was the final straw.

"He didn’t get to her, but it was leading to that point," said Ballentine, who testified she was legally blind. "I just left."

Ballentine, whose relationship with Jones turned sexual when she turned 17 in 2012, said she could tell Jones was depressed about being a divorced father of five, but she never suspected he had a mental illness.

"I’ve never seen him have any kind of symptoms of being insane," she said, testifying in Jones Jr.'s defense. "He was acting off, but I don’t know if it’s insanity."

She recalled when the middle child, Nahtahn, accidentally broke a window.

"He whipped him pretty hard, and they had to stand in the corner on their tippy toes all day long," Ballentine said.

"He knew what was right and wrong. He knew about God — what you should do in life. He was pretty sure of himself and pretty sure of everything," she said, noting Jones' alcohol of choice was Crown Royal, as "everybody knows liquor gets you drunk quicker."