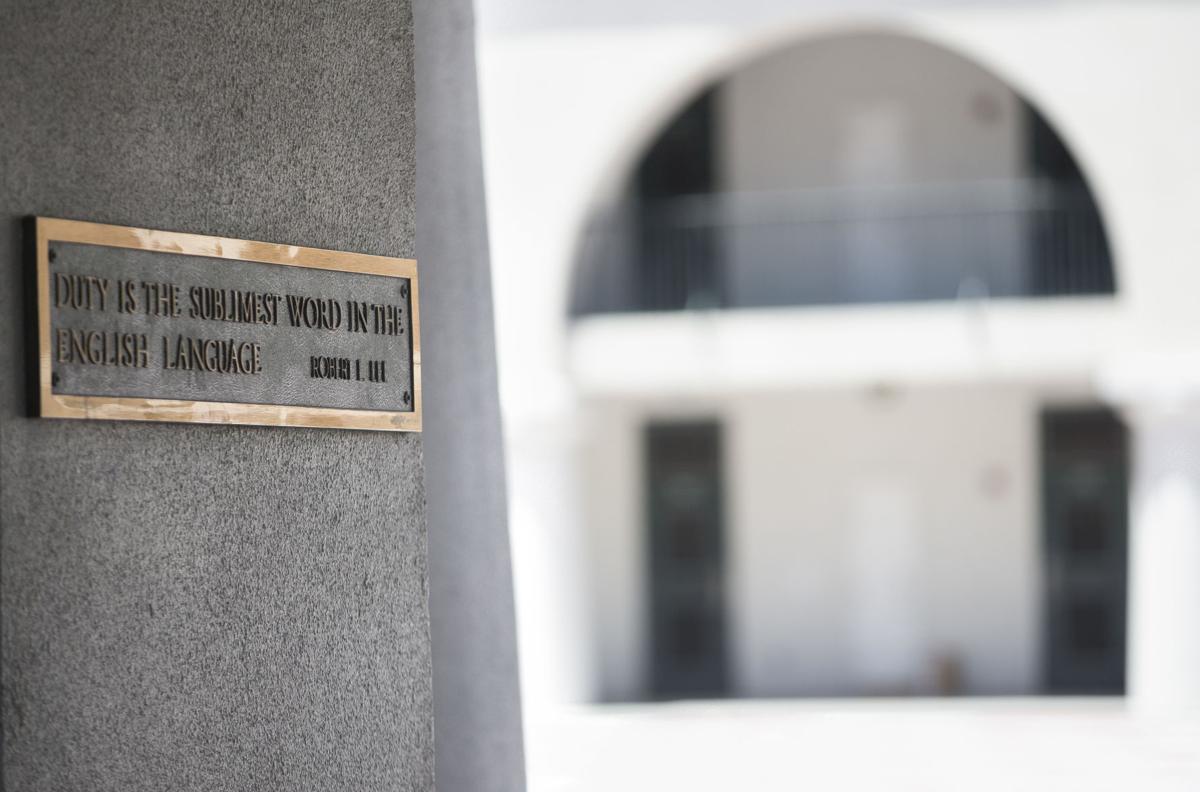 A quote attributed to Confederate Gen. Robert E. Lee hangs in the entryway to Murray Barracks, built in 1999. Each of The Citadel's barracks has the quote engraved on a plaque, and every freshman cadet is required to recite it on command. The quote is a forgery and has been known to be fake since 1914. Andrew J. Whitaker/ Staff 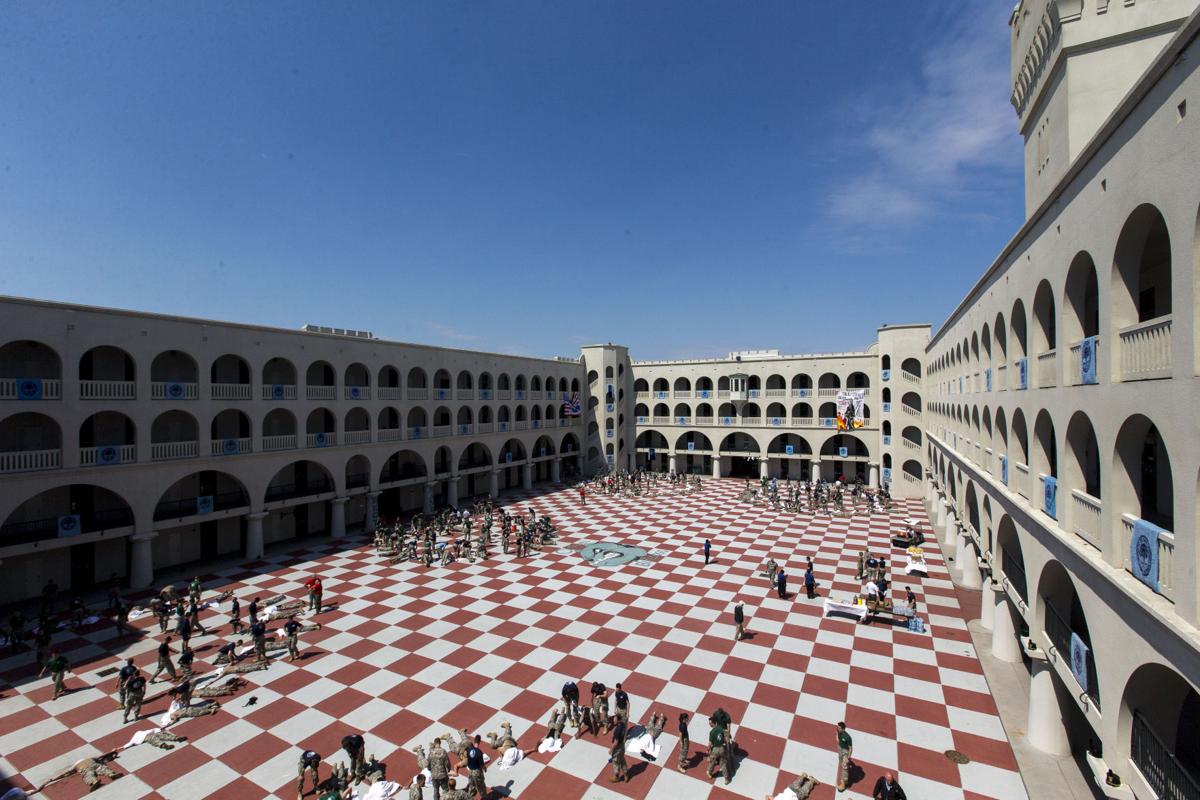 Citadel freshmen are required to memorize a quote thought to have been from Confederate Gen. Robert E. Lee. File/Andrew J. Whitaker/Staff 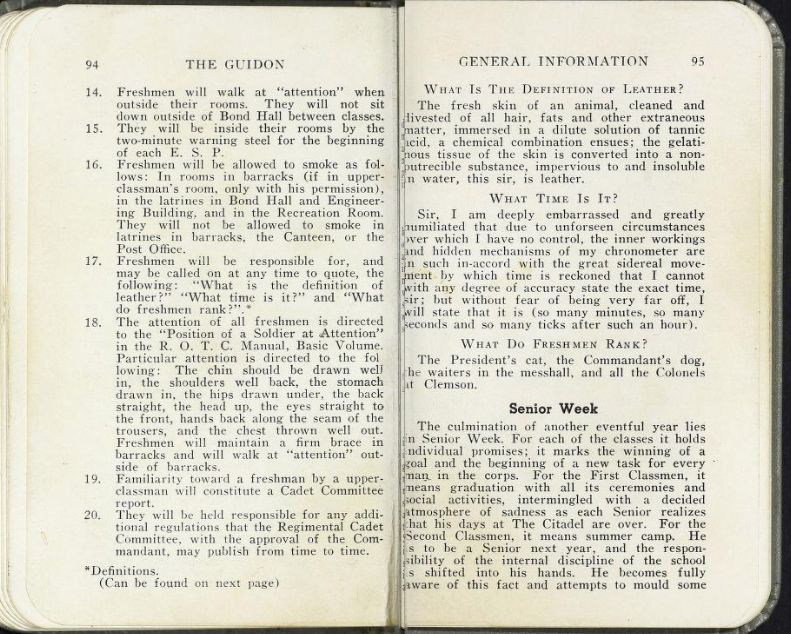 The Guidon for the 1939-40 academic year did not include the quote attributed to Robert E. Lee, and it only included three questions and answers that cadets had to memorize: "What is the definition of leather?" "What time is it?" and "What do freshmen rank?" The answer to the final question was, "The President's cat, the Commandant's dog, the waiters in the messhall, and the Colonels at Clemson." The Citadel/Provided 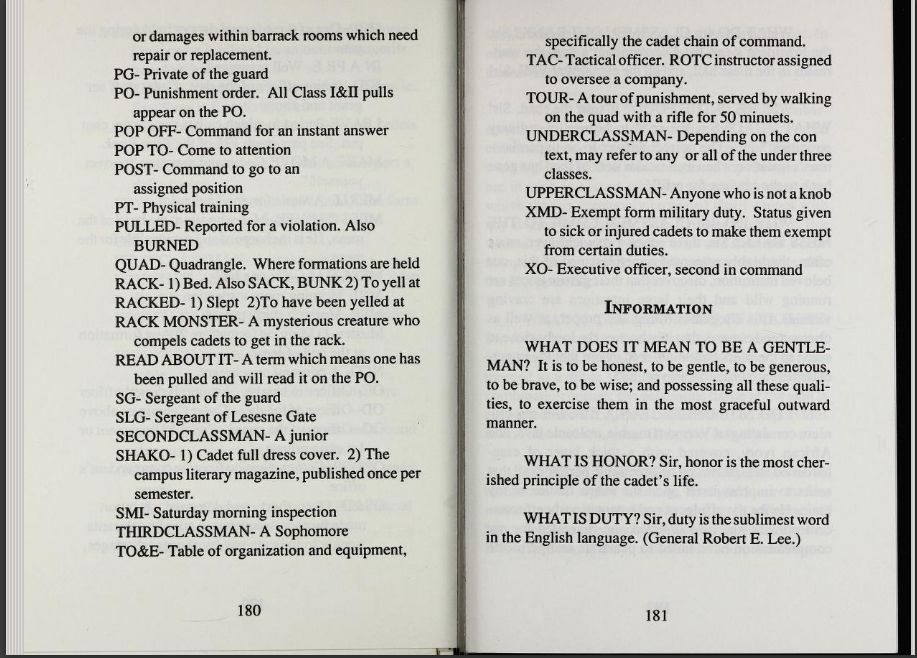 The Guidon for the 1990-91 school year included a shortened version of the forged Robert E. Lee quote in the section on mandatory "cadet knowledge." The full quote did not appear until 2015, the year after a Citadel professor published a lengthy article about the quote's forgery. The Citadel/Provided 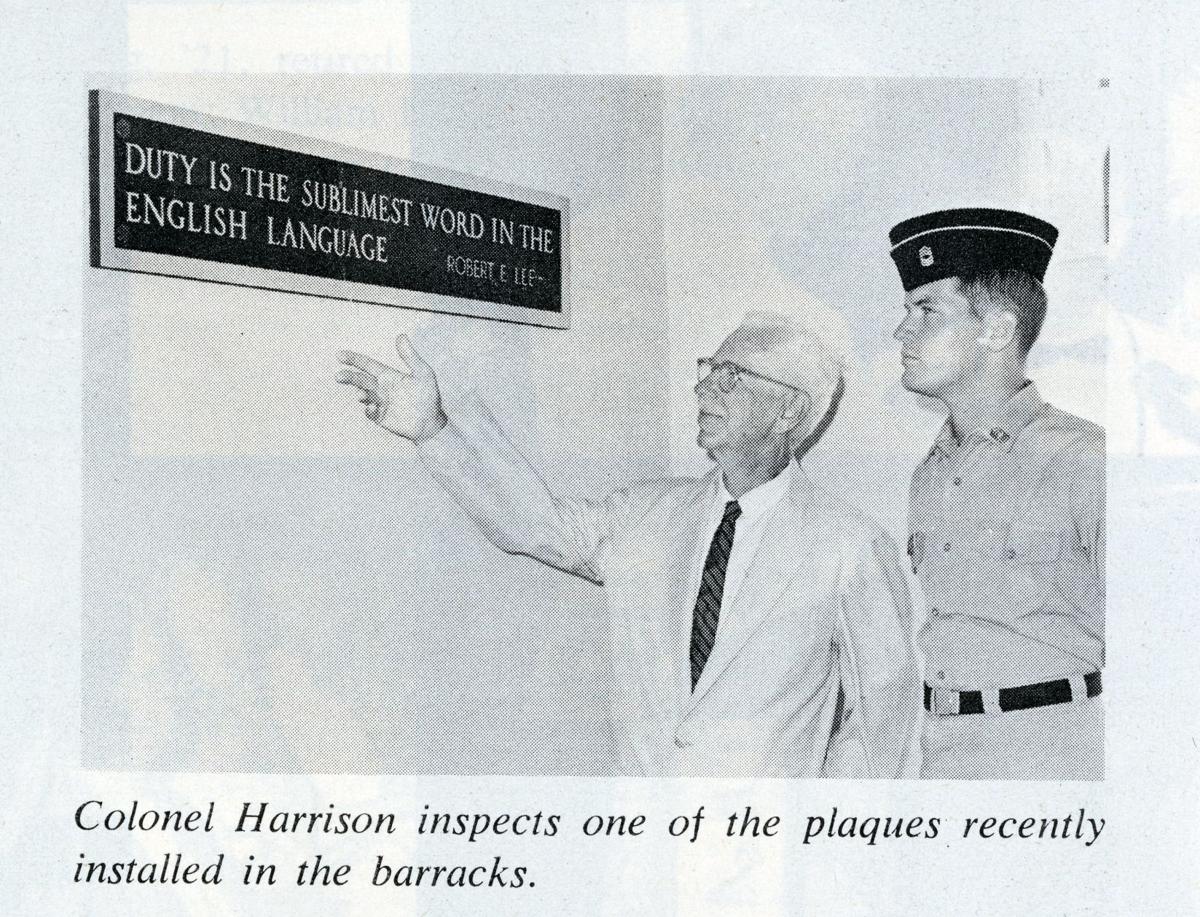 A clipping from a 1969 Citadel alumni newsletter indicates that a plaque bearing the quote was "recently installed' in one of the barracks. It had appeared in Padgett-Thomas Barracks since the 1920s, and on a guard room wall since the 1880s. Provided/The Citadel

A quote attributed to Confederate Gen. Robert E. Lee hangs in the entryway to Murray Barracks, built in 1999. Each of The Citadel's barracks has the quote engraved on a plaque, and every freshman cadet is required to recite it on command. The quote is a forgery and has been known to be fake since 1914. Andrew J. Whitaker/ Staff

The Guidon for the 1990-91 school year included a shortened version of the forged Robert E. Lee quote in the section on mandatory "cadet knowledge." The full quote did not appear until 2015, the year after a Citadel professor published a lengthy article about the quote's forgery. The Citadel/Provided

At The Citadel, every freshman cadet is required to memorize a quotation from Confederate Gen. Robert E. Lee on the importance of duty.

These words loom large in the military environment of the public college, mounted on plaques in each barracks. The quote echoes in the checkered quadrangles as upperclassmen demand their recitation from petrified freshmen, or knobs.

“Duty is the sublimest word in the English language," begins the quote. "You should do your duty in all things. You can never do more. You should never wish to do less.”

The source of the quote, a letter that Lee purportedly wrote to his son in 1852, was exposed as a forgery in 1914 when University of Virginia law professor Charles Alfred Graves published a meticulous debunking in the Virginia State Bar proceedings. Even before Graves' scholarship, members of Lee's own family had expressed misgivings about the letter's authenticity. By some accounts, Lee himself denied he ever wrote it.

An English professor within The Citadel's ranks, Sean Heuston, revisited Lee's "Duty Quote" 100 years later in 2014. He published his findings about its origin and persistence in public imagination in a Journal of American Studies article titled "The Most Famous Thing Robert E. Lee Never Said: Duty, Forgery, and Cultural Amnesia."

Heuston agreed with Graves and the consensus of modern Lee biographers: The quote was a piece of pure myth-making, on par with George Washington's apocryphal "I cannot tell a lie" quote. Lee’s alleged words had survived and spread, not just at The Citadel, but in grade school textbooks, early Lee biographies and even the public papers of President Gerald Ford.

It was the quote's staying power at The Citadel that sparked Heuston's interest. He told administrators about his findings before his paper was published.

The quote had appeared in The Citadel's cadet manuals on and off since at least the 1950s but always in shortened form, including only the first sentence.

In 2015, the year after Heuston’s findings, the school doubled down and began requiring freshman cadets to recite not just the first sentence, but all four sentences of Lee's "Duty Quote." The rule remained in effect this year.

"Those are worthy sentiments and worthy messages for people to adopt, regardless of who wrote them," Citadel spokesman Col. John L. Dorrian said. "So those things don’t necessarily need to be stricken from the lore just because there’s some doubt as to who said them."

Lee's quote first appeared on a guard-room wall at The Citadel in the 1880s. It later surfaced in the Padgett-Thomas Barracks in the 1920s, in the Guidon student manual in the 1950s, and on the rest of the barracks by the late-1960s, according to historic documents and Citadel historian Steve Smith.

The earliest known reference to the Duty Quote at The Citadel comes from Col. Oliver Bond, an 1886 alumnus who later served as president.

He recalled in his 1936 book "The Story of the Citadel" that the school posted the first sentence of the quote in a frame on the guard-room wall, apparently as part of an effort to promote school-wide unity and put down unauthorized fraternities.

By Bond's recollection, the all-caps sign "inspired many a cadet officer to perform his military functions with strictness and impartiality."

Today, the quote appears on the first page after the table of contents in the Blue Book, a manual for cadet life, under heading 1.2: "DUTY."

It can also be found in the Guidon, the booklet containing "cadet knowledge" that all freshmen must memorize before they arrive on campus and then recite on command. It appears alongside a lengthier quote on the subject of discipline from U.S. Gen. John Schofield, who fought for the Union in the Civil War.

Professor Heuston knew the Lee quote well, or thought he did, around 2012 when he asked the cadets in one of his English classes for an example of a slogan they heard frequently. One piped up with the Lee quote, dutifully committed to heart and attributed to the Confederate war hero.

Heuston said he sat down later that day to Google the quote and found three variations online.

It turned out none of them even precisely matched the original source document, which was fake to begin with.

After more than a century of obsessive cataloging of Lee's correspondence, the only written record of the Duty Letter is a supposed republication of it in the New York Sun on Nov. 26, 1864.

The Sun ran it under the headline "Private Letter from General Lee," with an editor's note explaining that it "is interesting as illustrating a phase in his character." It was addressed to Lee's eldest son, George Washington Custis Lee, and dated April 5, 1852.

According to the letter, Lee was leaving his home at "Arlington House" for far-off New Mexico to join his "fine old regiment" in battle.

Within a month, several newspapers had republished or flat-out plagiarized the letter. Among them was the Sentinel of Richmond, Virginia, which mistakenly gave credit to the Philadelphia Inquirer for publishing it first. It ran the letter on Dec. 16, 1865, but then renounced it on Dec. 20 as a "Yankee Forgery," citing an anonymous letter "from a source entitled to know."

Still, the letter circulated, and the quote took on a life of its own, nearly always paraphrased from the original.

In 1914, confessing himself to be a devotee of Lee's legacy, the UVA law professor Graves nonetheless wrote that he felt compelled to set the record straight.

He started with the obvious inconsistencies.

On the supposed date of the letter, Lee's home was in Baltimore, not Arlington, and he never referred to his home as "Arlington House" in any verified letter on record.

Furthermore, Lee never traveled to New Mexico with any "old regiment," particularly not in 1852, when he went from supervising the construction of Fort Carroll in Maryland to becoming West Point's superintendent.

Graves went the extra mile in his research. In 1910, he had contacted Custis, the supposed recipient of the letter, who was still alive at the time and said he had never received any such letter from his father. Graves also contacted three scholars and contemporaries of the elder Lee, who all remarked that the florid style of the letter did not sound like the man of action they knew.

The best theory Graves could formulate was that a Union soldier, sifting through Lee's letters in Arlington, may have penned the letter as a lighthearted prank to see if he could get it published. It was, at least, a flattering imitation in the eyes of many Southerners and passed muster for decades to come.

The drilling of a Confederate icon's words has not always resounded among the school's ranks of black cadets.

One black Citadel alumnus, Hillery Douglas, entered The Citadel in 1978 on a football scholarship and says he largely ignored what he called the "white knowledge" the school was trying to impart on him via the Guidon. Instead of spouting off Confederate trivia, he says he chose to do push-ups as punishment.

While Douglas could not recall the Lee quote from his own time at the school, he said he was not at all surprised to learn the college was making students recite Confederate lore — or that the quote was a fabrication.

"I didn’t think it was important," said Douglas, who graduated in 1982. "It wasn’t anything that was going to come up in my life. I haven’t been asked to sing 'Dixie' or quote some Robert E. Lee foolishness."

Graves' 1914 article "The Forged Letter of General Robert E. Lee" spanned 40 pages in the Virginia State Bar Association's proceedings for that year, fastidiously dismantling theories that sought to uphold the validity of the so-called "Duty Letter." He published another rebuttal in The New York Times in 1917.

He wrote that he did not take the matter of refuting the letter lightly as it had already been "accepted as genuine by two generations of Americans."

Like Graves, who wrote that the Duty Letter was "almost a new gospel" for Southerners, Heuston wrote about the letter as the foundation of a near-religious doctrine.

"Insofar as Lee is regarded as the incarnation of some Confederate and/or Southern ideal, he effectively functions as something like a belief system rather than as a standard historical figure susceptible to standard historical analysis," Heuston wrote.

Despite what a member of its own faculty has found four years ago, The Citadel has announced no plans to take the Lee quote out of the Guidon or to take the plaques down.

He was assistant commandant of the U.S. Marine Corps. Now he's president of The Citadel. One semester in, retired Gen. Glenn Walters has big plans for revamping the finances and facilities of his alma mater.