A judicial ethics complaint against South Carolina U.S. District Judge Joe Dawson over a contract he signed with his former employer Charleston County will be sent to a special committee of judges for further investigation.

In an Oct. 19 order, 4th Circuit Court of Appeals Chief Judge Roger Gregory ruled the complaint would not be dismissed, but rather "that a special committee must be appointed to conduct an investigation and report its findings and recommendations to the judicial council."

The ethics complaint was filed by Gabe Roth, executive director of the nonprofit advocacy group Fix the Court, in February shortly after The Post and Courier reported on the contract Dawson signed with Charleston County as he departed as its main attorney for the federal bench.

Dawson had been the county's attorney for nearly 20 years and was confirmed for a seat on the U.S. District Court in Greenville in December. 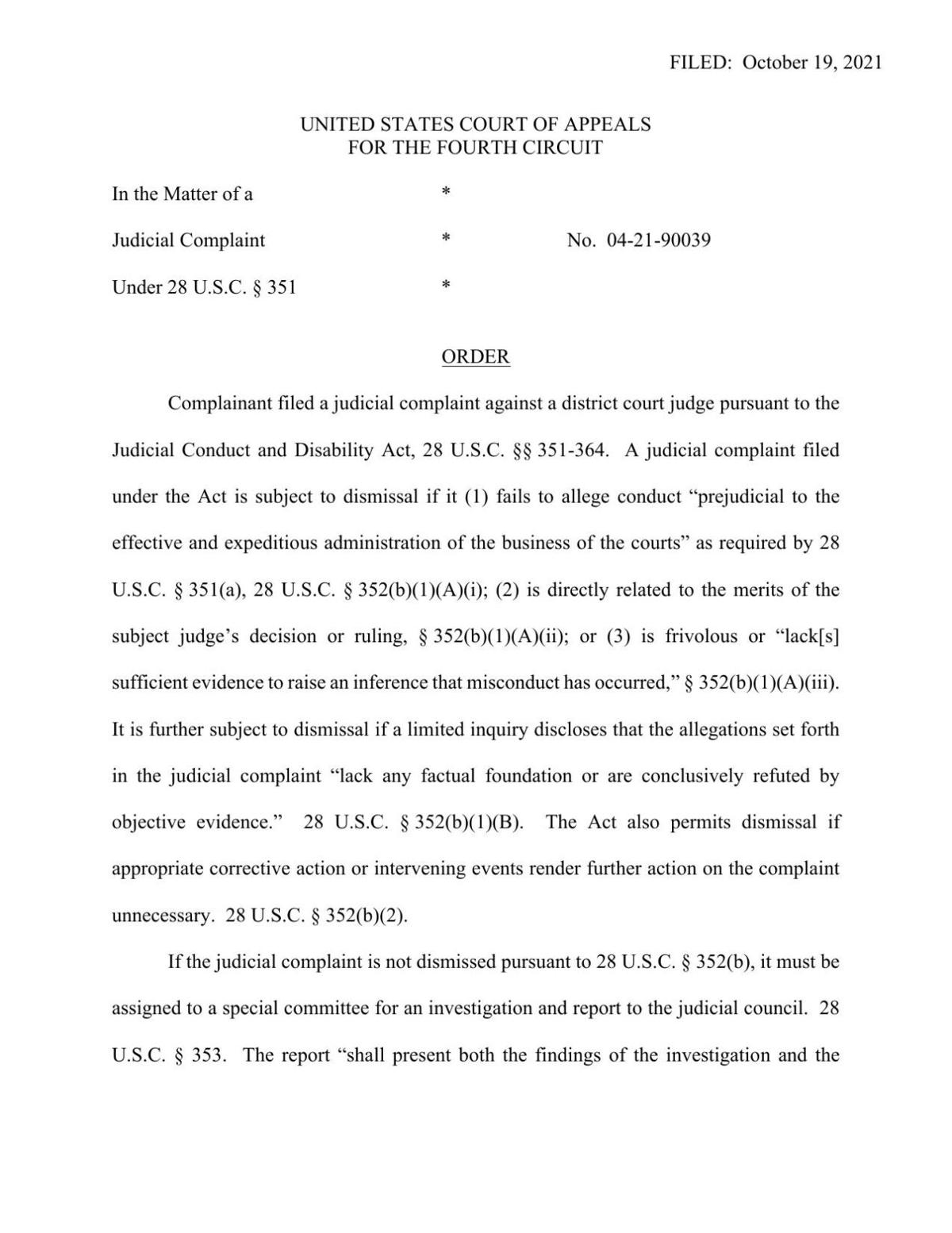 In the contract with Charleston County, which Dawson wrote, according to County Council Chairman Teddie Pryor, Dawson received $216,000 and the promise of 1.5 percent of any settlement Charleston County receives from national litigation over opioid pharmaceuticals. The arrangement was in exchange for a year of his “institutional and historical knowledge and insight,” it was stipulated.

Dawson was paid $432,000 a year as the county's attorney, and earns about half that much as a federal judge. The focus of the ethics complaint was not the large payment he received from Charleston County when he left his job there, but what he agreed to do for the county in return.

Under the Code of Conduct for U.S. judges, federal judges are not allowed to practice law or provide legal services. The deal raised enough questions for Roth to file an ethics complaint. In response, the county and Dawson amended the deal in May by eliminating the opioid lawsuit provision and seeking to clarify that Dawson would not provide legal advice.

Gregory's order suggests those changes were not enough to resolve the matter.

“I was expecting this to be concluded, not continued," Roth told The Post and Courier. “I was not expecting the contract to be rewritten three months after I filed the complaint, and I was about 85 percent satisfied with what happened."

Dawson has for years refused to speak with news reporters, and has made no public comments about the monthslong controversy. He did not respond to a request for comment Oct. 20.

University of Pittsburgh Professor Arthur Hellman, an expert on judicial ethics, said Gregory could have decided that amending Dawson's contract was a voluntary action that concluded the matter. Instead, he referred the complaint to a committee of judges.

“What it says is that the modifications to the contract are not sufficient to enable the chief judge to say … 'There’s nothing there,' " Hellman said. “It does escalate it. Only a handful of complaints each year are sent to a special committee."

Hellman said Dawson's amended contract may not have resolved the issue because it still called for Dawson to provide the county with information, even while expressly stating that he would "not provide any services or advice to the county."

“It leaves open the possibility that he would be doing something to earn the money that he got back in December," said Hellman.

The complaint process lacks transparency, he said. Gregory's order, for example, does not name Dawson as the judge who is the focus of the complaint, although his order is specifically dealing with that complaint.