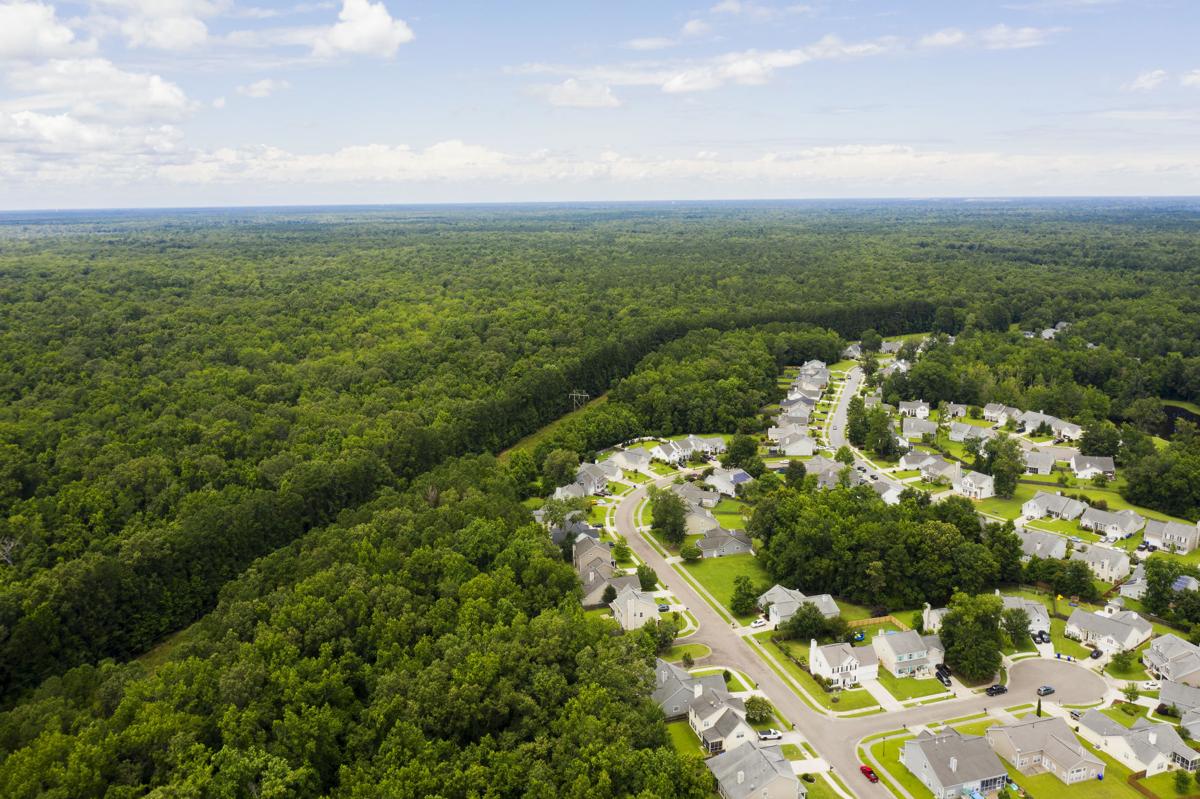 The Grand Oaks development is seen against a portion of land that is part of the planned Long Savannah community in West Ashley on Thursday, June 18, 2020. Lauren Petracca/Staff 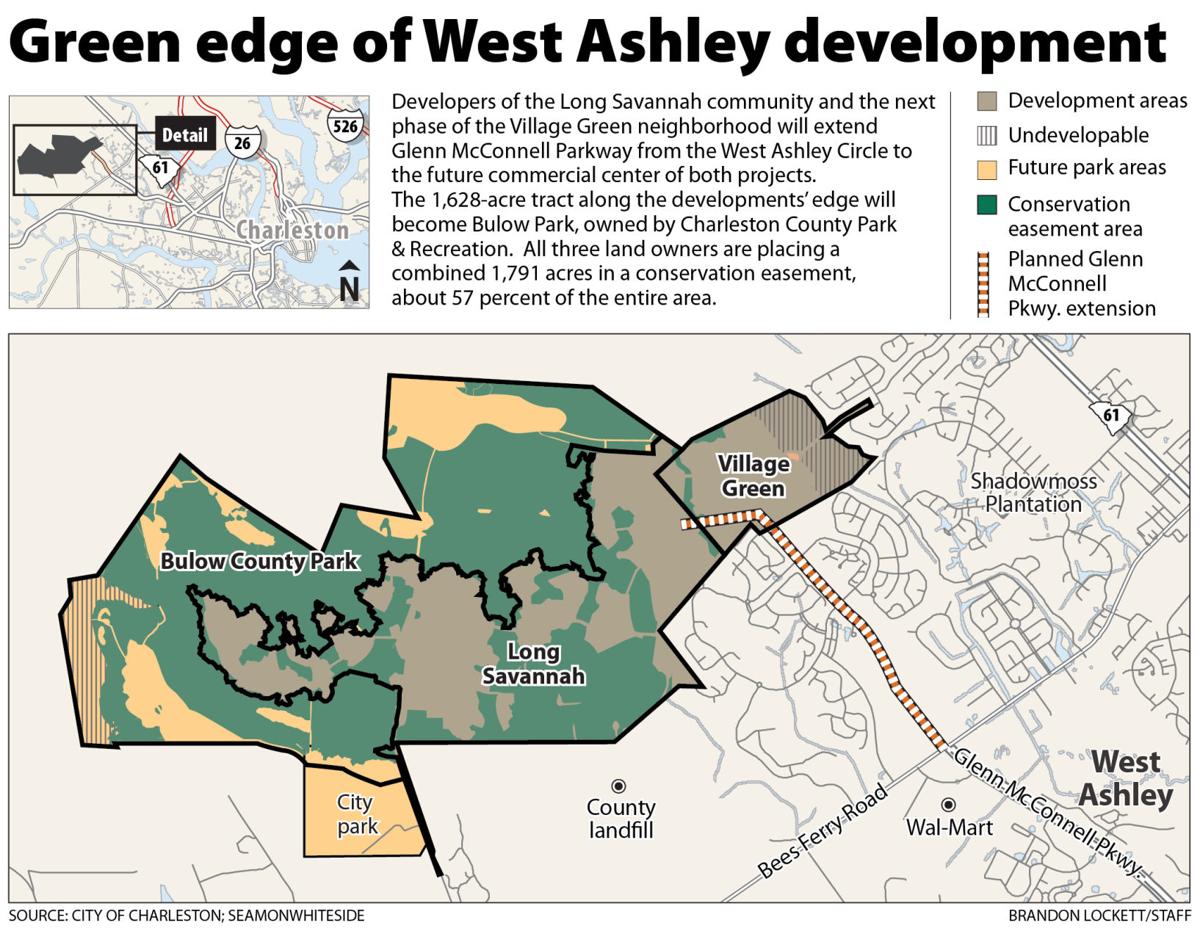 Long Savannah, a massive development initially seen as strengthening conservation in the Charleston region, is being challenged by environmental groups.

Though it's been in the works for 15 years, the more than 3,000-acre project is still in the relatively early stages of getting approval for disturbing sensitive wetlands. It includes multiple parcels at the undeveloped western edge of West Ashley, and will include an expansion of Glenn McConnell Parkway.

Earlier this month, a decision by state regulators to greenlight one permit for the project was challenged in two filings by multiple environmental groups. They contend the project should make more accommodation for the upward of 200 acres of wetlands being destroyed in the current design.

They also point out the project's proximity to flood-prone neighborhoods near Church Creek, a narrow stream that winds through West Ashley's suburban outskirts and is prone to overflowing into homes and churches, as it has done multiple times in recent years' storms.

Andrew Wunderley, of Charleston Waterkeeper, which is one of the protesting parties, said the request to fill or dig out that many acres of wetlands "stuck out like the north star on a clear night" from typical development proposals.

Countering that, developer Taylor Bush insists the project will actually help the problem in Church Creek, in part, because it's intended to divert water away to the nearby Stono River.

"We’ve been trying to be as responsible as possible to change our plan to accommodate this new reality" that older developments nearby have inadequate water retention, Bush said.

In total, the Long Savannah project has development rights to 4,500 homes based on a 2015 agreement with the city of Charleston. The plan includes both commercial and residential building, with its densest section along the expansion of Glenn McConnell Parkway.

Long Savannah has sought permits to disturb wetlands along with an adjacent housing project — a new phase of the Village Green subdivision, which could on its own bring 1,500 new homes. Both projects' drainage designs will be subject to close review by the city of Charleston nearer to when they commence construction.

But developers had to twice have a technical expert count wetlands on the property because the first report was done too long ago to still be valid. The second time around, many more wetlands were found.

Bush argued that these newly identified areas are not the bottomland swamp that a layman might picture, and called them "transitional."

Amy Armstrong of the South Carolina Environmental Law Project said that's a common defense raised by developers who plan to build on sensitive areas. Armstrong's firm is representing the Sierra Club and S.C. Wildlife Federation in a challenge separate from Waterkeeper's.

She argued that, in the eyes of the law, it doesn't matter what type of wetland is at issue — they're all afforded protection.

Environmental groups were on a tight timeline, just 15 days, to ask the S.C. Department of Health and Environmental Control to reconsider its decision.

But the challenges are a far cry from the time when the project was conceived, when environmentalists concerned with controlling Charleston's expansion were less laser-focused on flooding concerns.

Years ago, Long Savannah was championed by Coastal Conservation League founder Dana Beach. He has since retired from that group.

In the years before Long Savannah was even planned, conservationists pushed for several land protection deals in the swath of private land west of Bee's Ferry Road, Beach said.

"This area was in tremendous, rapid potential transition," Beach said.

He added that big pieces of land around that westward wave of development "needed to be stabilized on the edge" of where the city was growing.

Part of that stabilization was the urban growth boundary, a line drawn by county officials that attempted to control the region's sprawl.

City of Charleston Planning Director Jacob Lindsey said the project was seen favorably by the city initially because because it ensured a corridor of protected parkland would be placed at the boundary.

The theory, Lindsey said, was that "there would never be a call for the expansion of the urban growth boundary at that location because the land had been protected."

Long Savannah, like other projects nearby, was put on ice when the Great Recession began in 2008. Now, more than a decade later, much of the conversation around development in the Charleston region has become laser-focused on flooding.

Existing homes closer to Church Creek have flooded multiple times, and Charleston has demolished dozens of them with federal grants so the damage doesn't continue. A consultant determined that a leading cause of flooding in this area was fill dirt, trucked in to raise house lots. The material leaves the creek few places to rise when hard rain falls.

The city has since made tailored regulations for new developments that drain to the creek.

Watch for the next Boom & Balance story that dives into the Summerville area. Is expansion happening too fast, and can the town's resources keep up with the increase in residents and traffic?

If Long Savannah's developers are able to show in a later technical review that their project will divert water away from Church Creek, Charleston's stormwater chief Matt Fountain said, they would not be subject to the special rules for that basin.

They will still almost certainly face other rules that Charleston recently updated: as of July 1, development designs across the city must account for storms that are 10 percent stronger than previous standards.

Fountain said those updated rules account for strengthening storms in the wake of climate change.

Meanwhile, the groups opposed to Long Savannah's wetland permits don't know when they will hear back on their challenges, but it's likely there will be a decision on whether DHEC will take their complaints into account by the agency's July 9 board of directors meeting. DHEC has 60 days to respond.