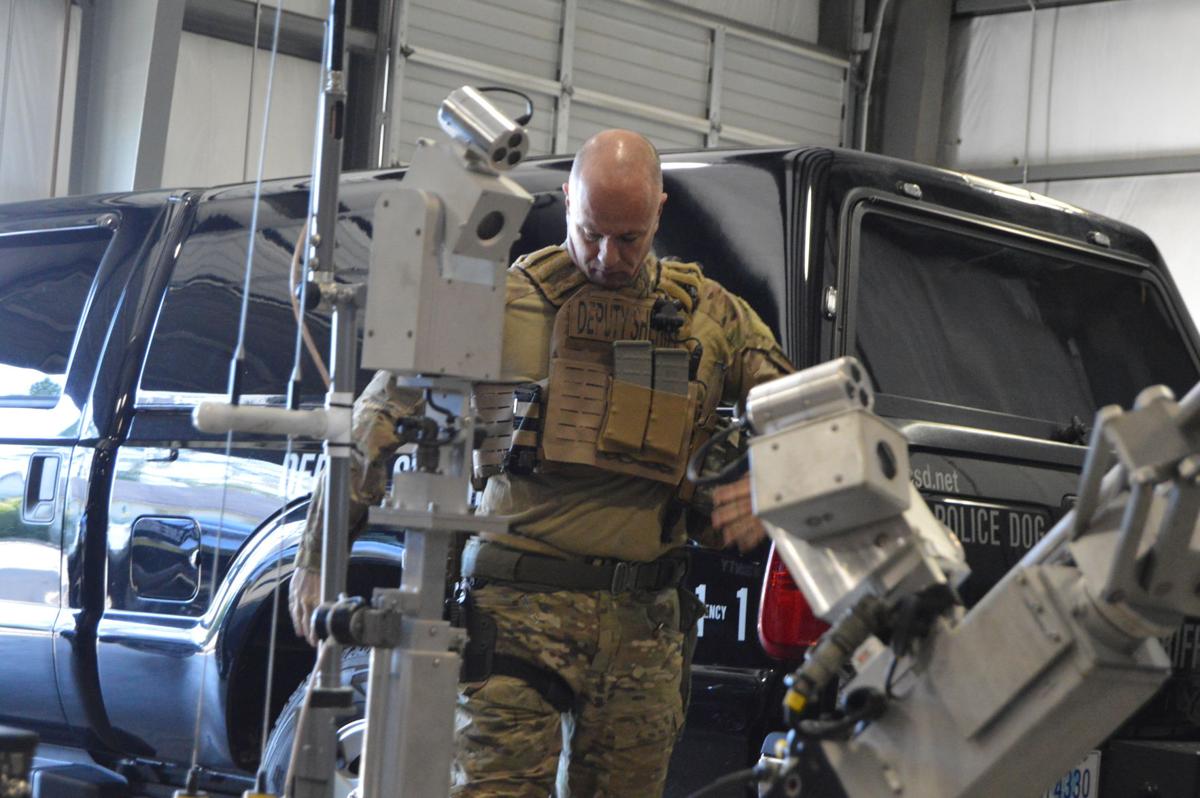 Larry Smith, sniper team leader for the Richland County Sheriff's Department, conducts a gear check during a recent demonstration. In front of him is one of the agency's several explosive detection robots. Adam Benson/Staff 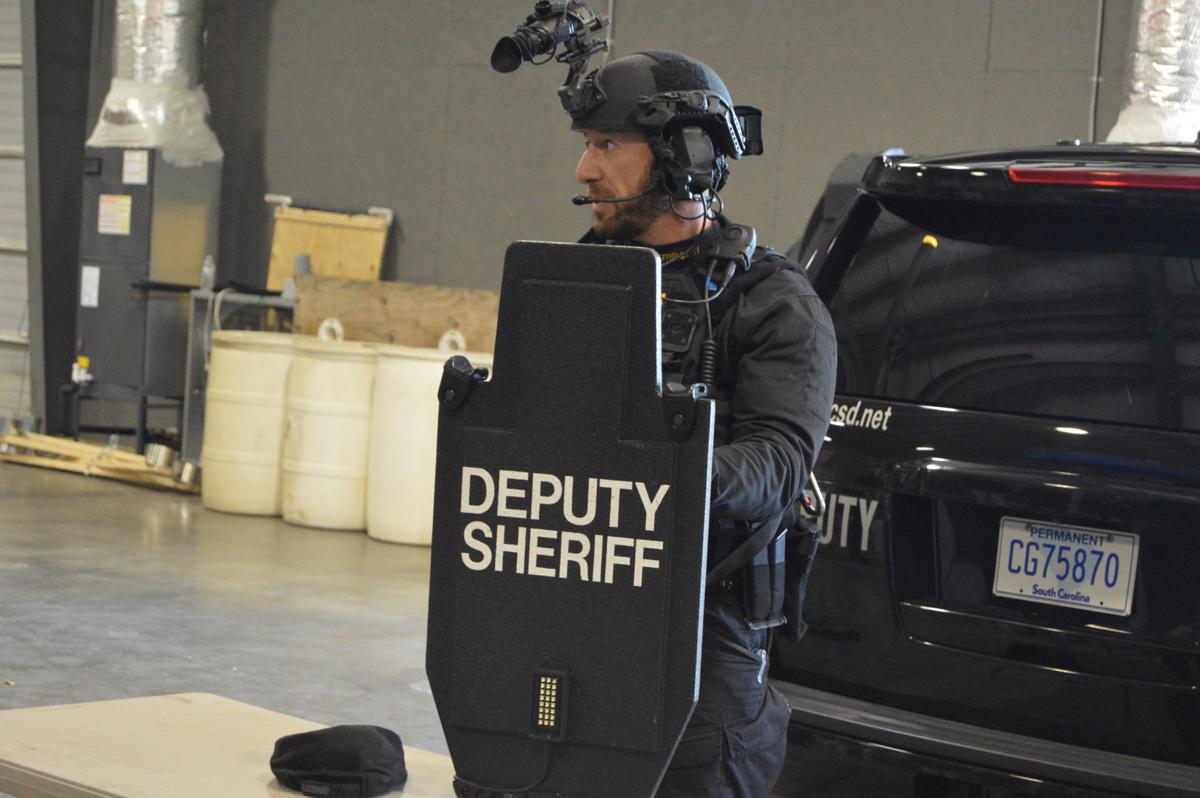 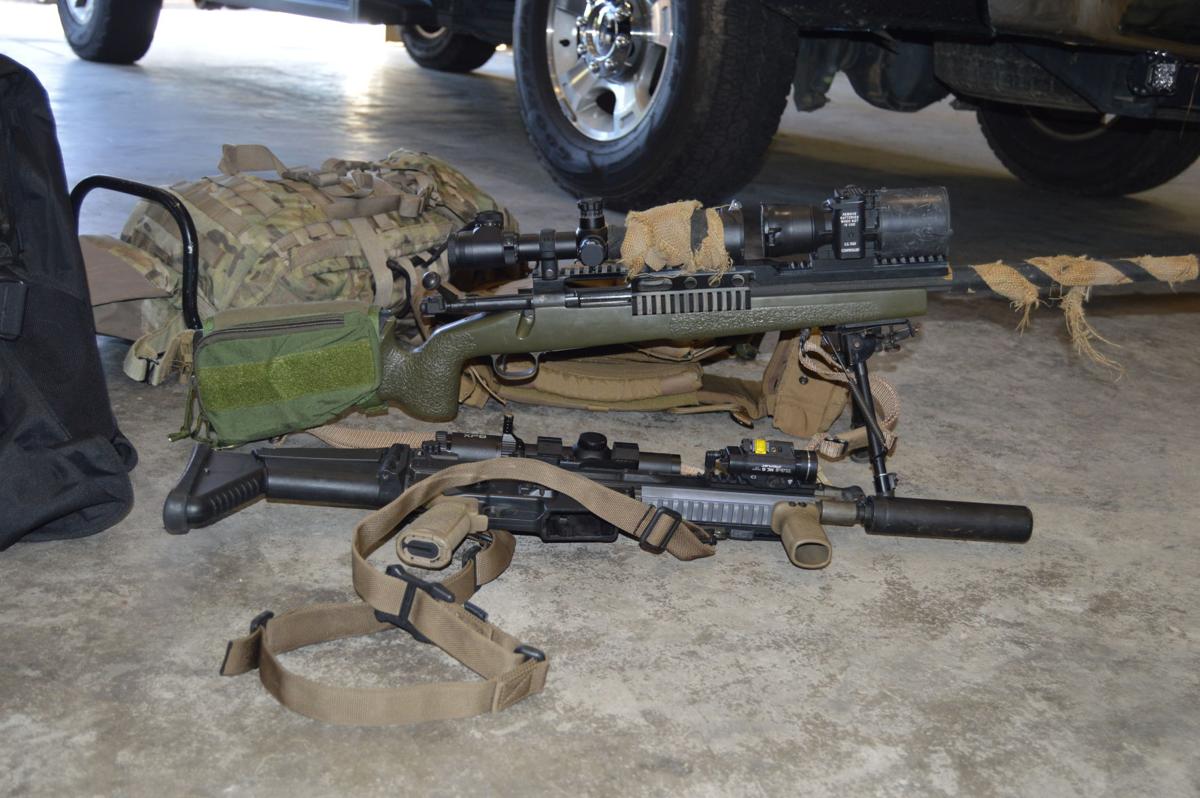 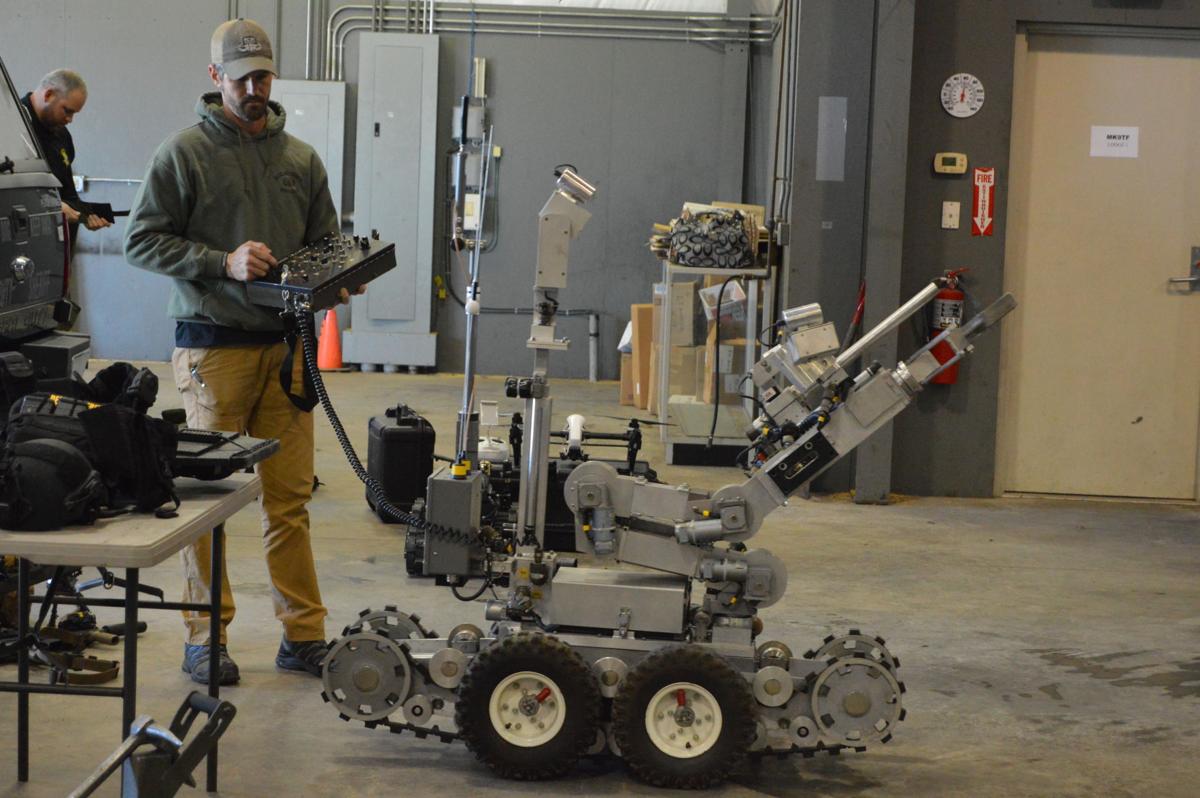 Drake Cobia, a technician with the Richland County Sheriff's Department bomb squad team, operates one of its detection robots during a recent demonstration. Adam Benson/Staff 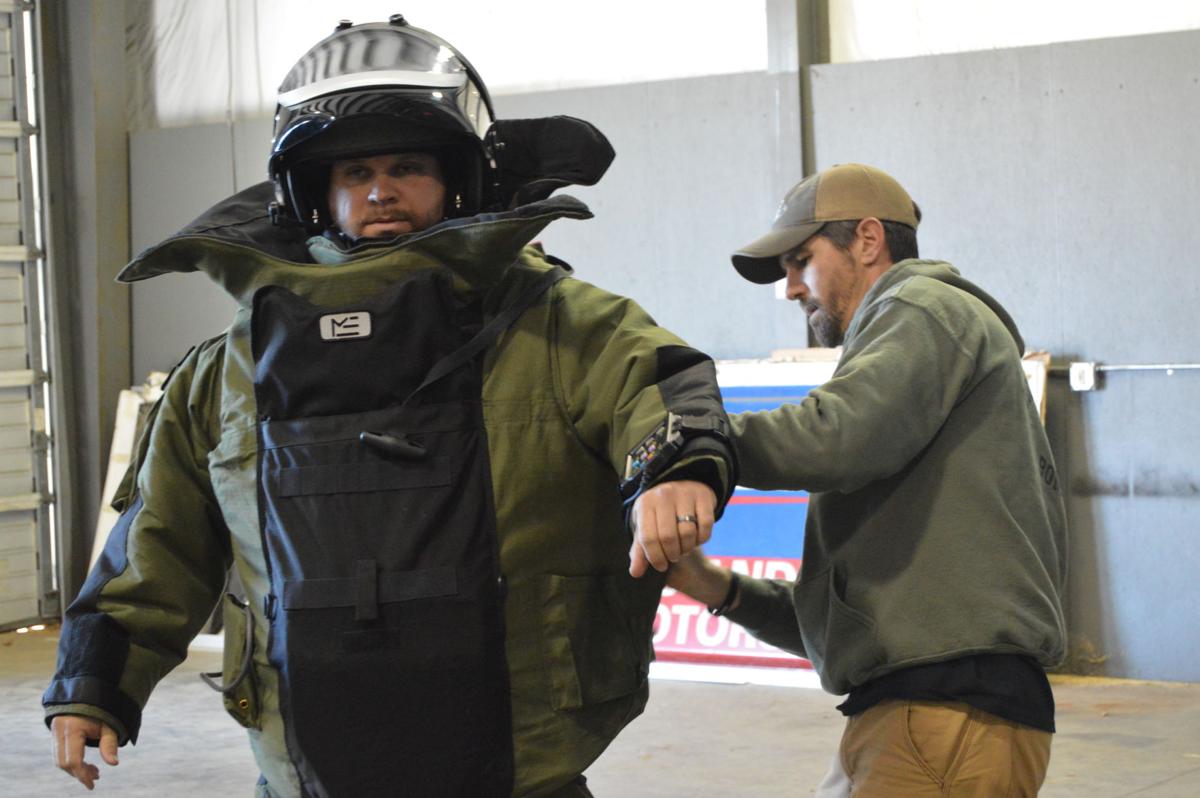 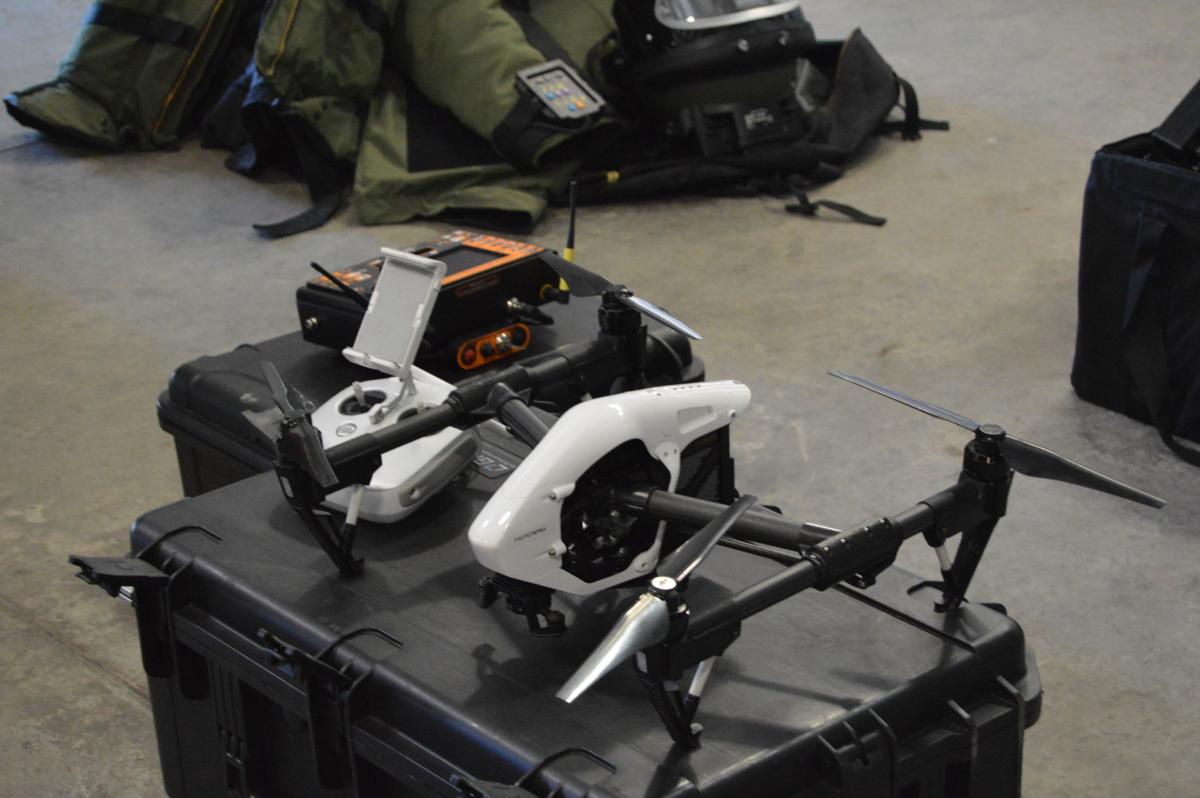 The Richland County Sheriff's Department maintains several drones such as this one, which can be used for surveillance or to give officers an overhead viewpoint of potentially dangerous situations. Adam Benson/Staff 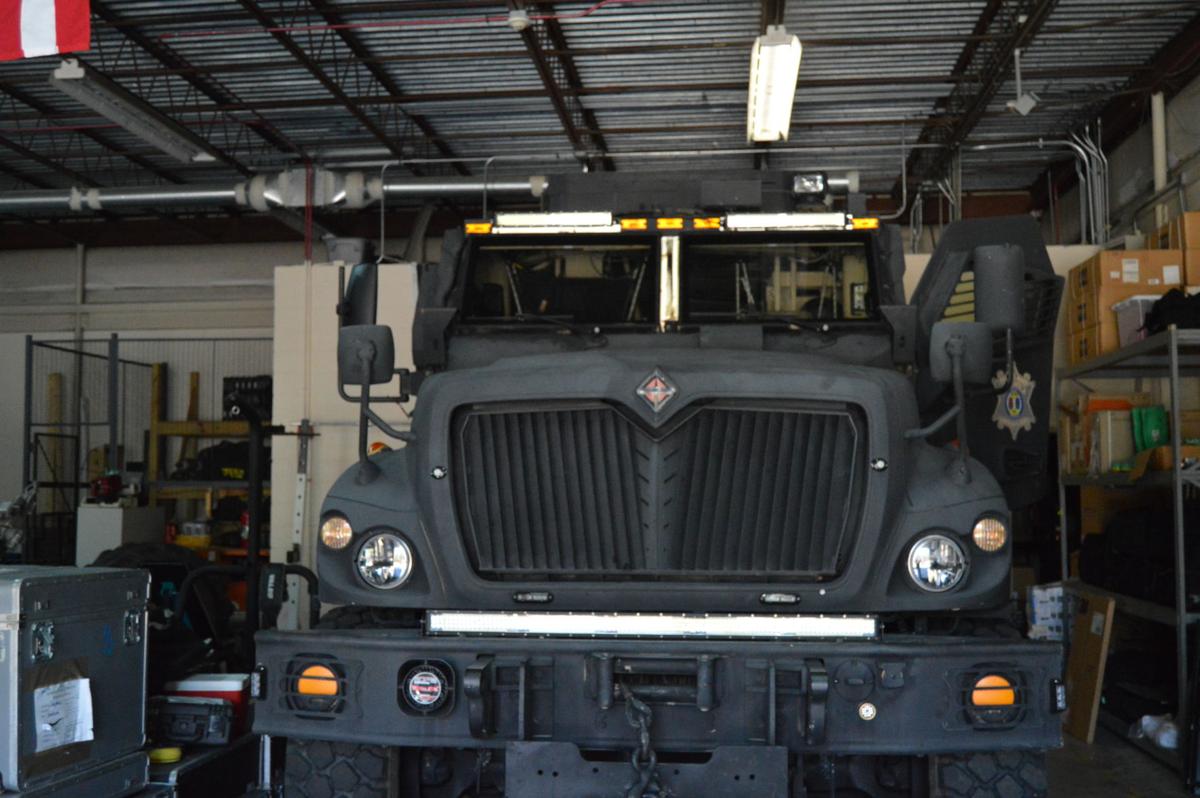 This Mine-Resistant Ambush Protected vehicle, or MRAP, is one of the most high-profile pieces of the Richland County Sheriff's Department inventory. It's pressed into the field about once a month and is also used for community outreach. Adam Benson/Staff

COLUMBIA — The Richland County Sheriff's Department has drones that can pinpoint suspects from above and robots that can find bombs.

Deputies drive an armored vehicle that once swept for explosives in the war-torn Middle East. They carry high-powered rifles capable of subduing people from hundreds of yards and climb into swift boats that can navigate rushing flood waters and steer people to safety.

Most recently Oakley, an 18-month-old English Labrador trained to sniff out electronic signatures, joined the department.

She was added to Sheriff Leon Lott's staff just before Thanksgiving.

What sounds like a video game cache is part of the sophisticated arsenal inside one of South Carolina’s largest police forces.

“Years and years ago, we used to pray for what we have now. In violent situations, all we had was just body armor and a shotgun,” said Capt. Michael Pritchett, commander of the sheriff's special response team.

“Now we have this, and it makes life so much easier.”

With 700 sworn officers serving more than 410,000 residents over 756 square miles — roughly two-thirds the size of Rhode Island — crime fighting in Richland County is a constantly shifting pursuit with a mixture of densely populated areas and sprawling rural fields to go along with dozens of state government buildings and several college campuses within the department's jurisdiction.

Having all this gear at the ready, Deputy Chief Chris Cowan said, is part of responsible police work with such a vast area to cover. The gear is obtained through a variety of sources including state and federal grants, county tax funds, military surplus programs and private donations from businesses and volunteers.

"We have to make sure we have the deployable resources to respond. If you drive from Eastover to Ballentine at the speed limit, that will take you 45 to 50 minutes," he said. "You can’t say, 'We’re all going to leave and come back.'"

Richland County’s law enforcement arm is distinctive from many of its peers in that it doesn’t have a traditional SWAT team.

Instead, officers under Pritchett’s watch are trained in specialized areas ranging from crisis intervention and forced entry to rapid medical response and surveillance.

"They're all designed to support each other. We cross-pollinate our teams," Cowan said. "The idea is that we then better understand what each responsibility is if we have to utilize any of the tools connected to those units."

Dan Weaver was starting to break out in a sweat on a crisp 46-degree December morning as he stepped into bulky, olive-green protective padding.

"This is about 100 pounds or so," the department’s bomb squad member said as he stepped into an explosive ordnance suit.

Drake Cobia, a member of his unit, helped Weaver into his garb before taking the controls of a robot used to disarm and identify devices. Earlier, he was assembling an unmanned drone that can provide responders with aerial shots of crime scenes or suspect locations.

As Cobia parked the robot, the agency’s sniper team leader Larry Smith — dressed in camouflage — conducted a gear check with helmets, bulletproof vests and high-powered rifles at his feet.

A few miles away from the department’s Two Notch Road headquarters, the agency’s Mine Resistant Ambush Protected, or MRAP vehicle, sits in a garage bay emblazoned with the department’s logo. The heavily armored tactical vehicle is used mostly for community relations but is pressed into action about once a month for field work.

Lott is always on the lookout for new technology — living or otherwise — to assist his officers, Cowan said.

Many pieces of the department’s inventory can be used in various ways as well.

After authorities took ownership of their MRAP through a federal program that transfers surplus military equipment to civilian law enforcement agencies, its gun turret was removed to allow space for a loudspeaker or marksman.

It doesn’t always work out, however. In 2015, Lott parted with the "Peacemaker," an M-113 armored personnel carrier that federal officials ordered returned after 10 years of being used as a public relations tool.

Although kept ready for use, the carrier never saw action beyond its PR role, thought it was outfitted with a battering ram and cameras.

As the department’s profile has risen through a longstanding partnership with cable channel A&E, which features deputies regularly on its popular "Live PD" series, Cowan and other top officials said communicating with the public on when and how devices are implemented has become standard operating procedure.

Gunshot detection technology is changing the game for Columbia cops

"There's a lot of law enforcement in this country who would be dissatisfied with this interview — that we're showing you this equipment and the fact is, people need to know," Cowan said. "Eighty percent of what law enforcement does in this country has nothing to do with deploying assets or weaponry or even using handcuffs. It doesn't have to do with being a warrior. It has to do with the mindset of being a guardian of this community, and that makes a big difference. The citizen who is barricaded in their home being held hostage, they want to know their police department is prepared to save them by whatever means necessary."