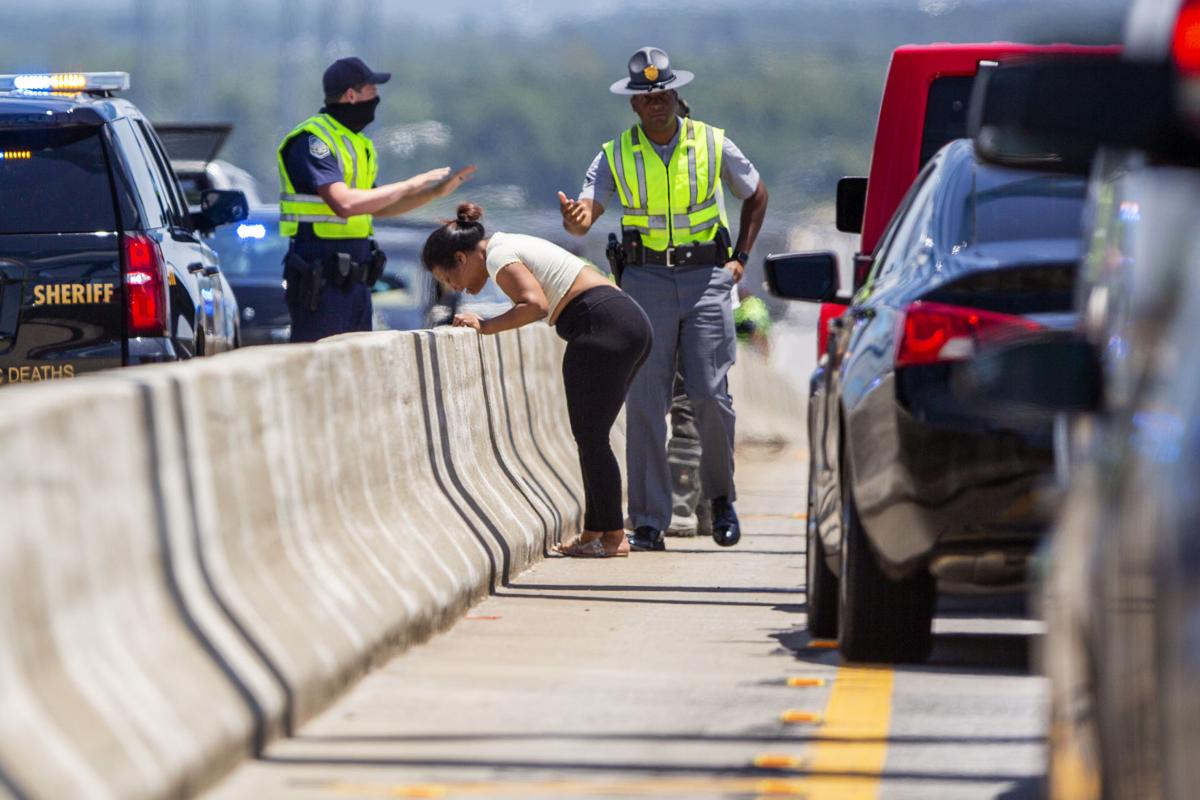 A woman is overcome with emotion at the scene of an accident on the Don Holt Bridge on Wednesday, July 1, 2020. File/Gavin McIntyre/Staff 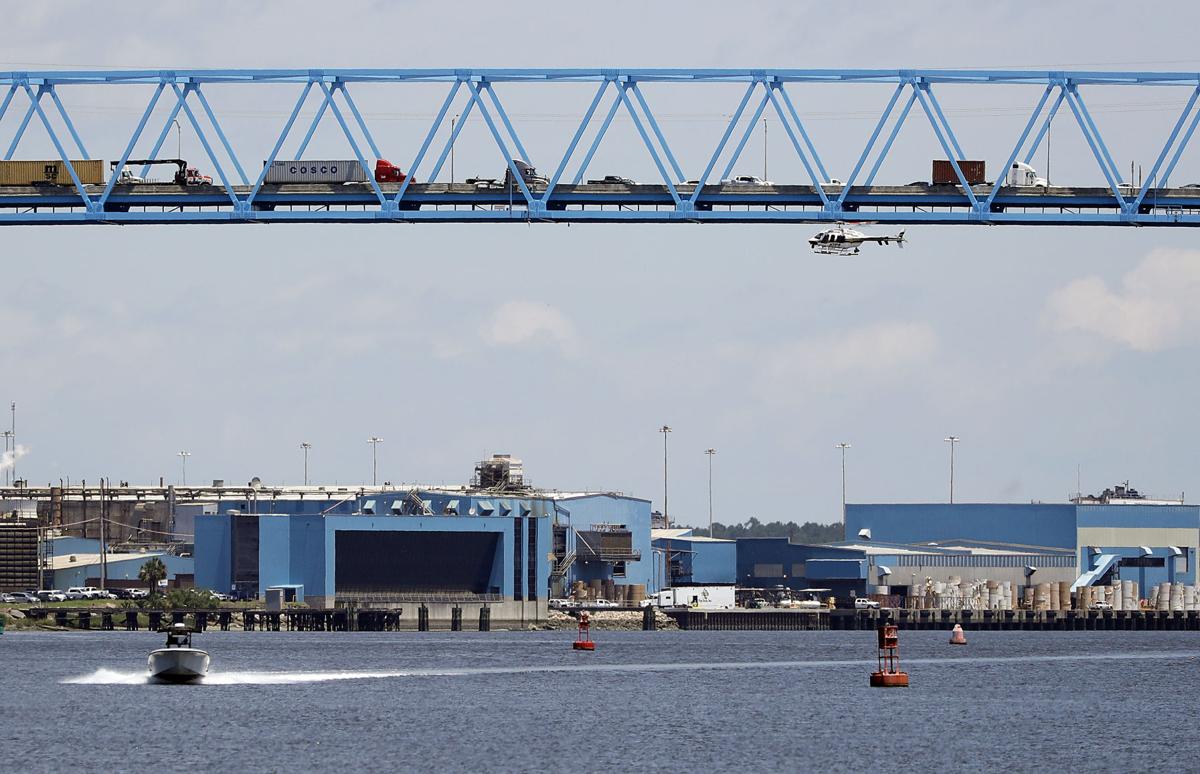 Westbound lanes of the Don Holt bridge were closed Wednesday morning, July 1, 2020 after an accident involving a Charleston County deputy and a tow truck operator. An air and water search is underway for the driver. Grace Beahm Alford/Staff 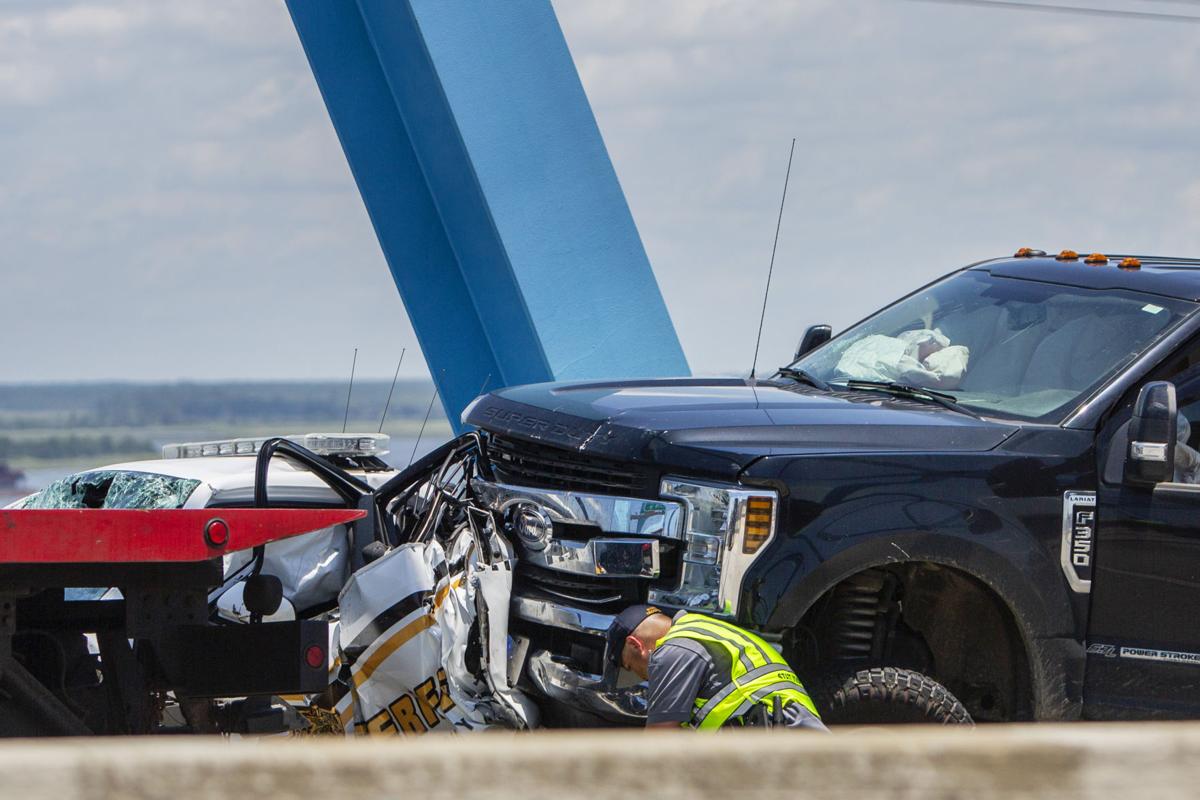 A Charleston County deputy was assisting with a disabled vehicle on the Don Holt Bridge when he was struck by a passing vehicle on Wednesday, July 1, 2020, according to the Sheriff's Office. File/Gavin McIntyre/Staff 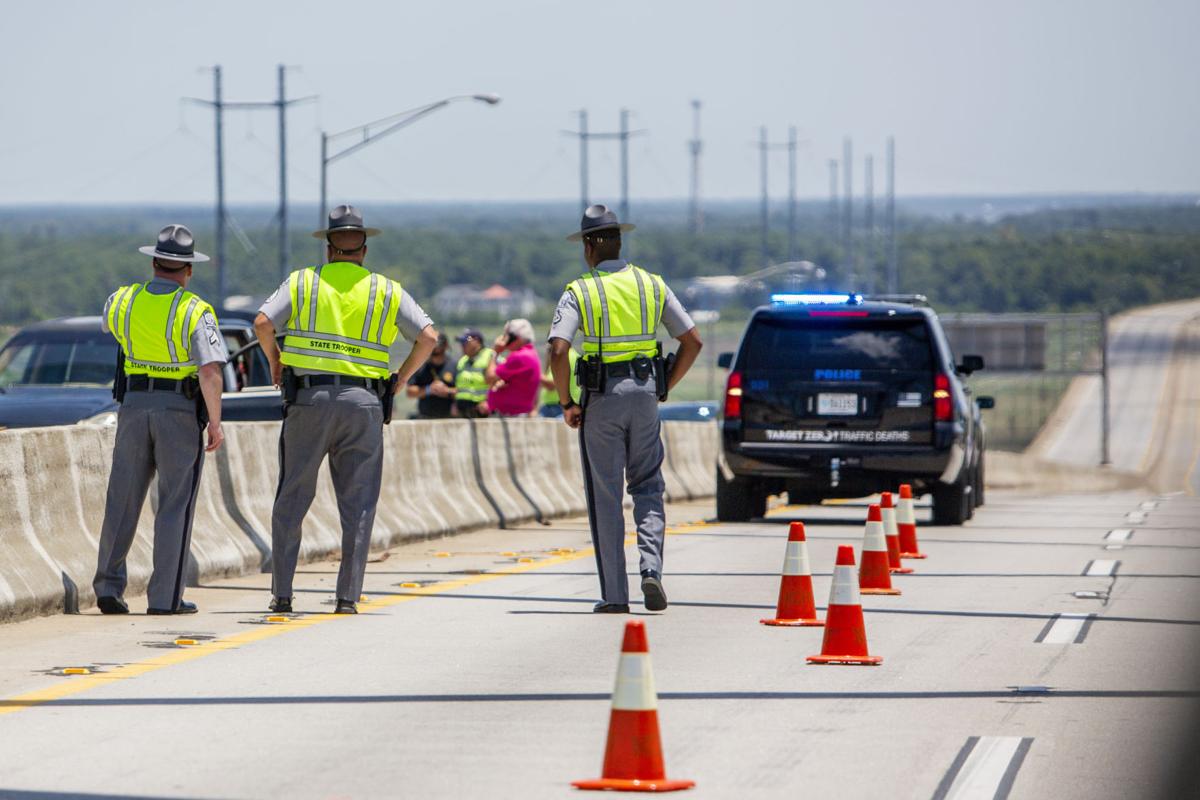 All westbound lanes of I-526 at Don Holt Bridge were blocked into the afternoon and a detour was put in place. Gavin McIntyre/Staff 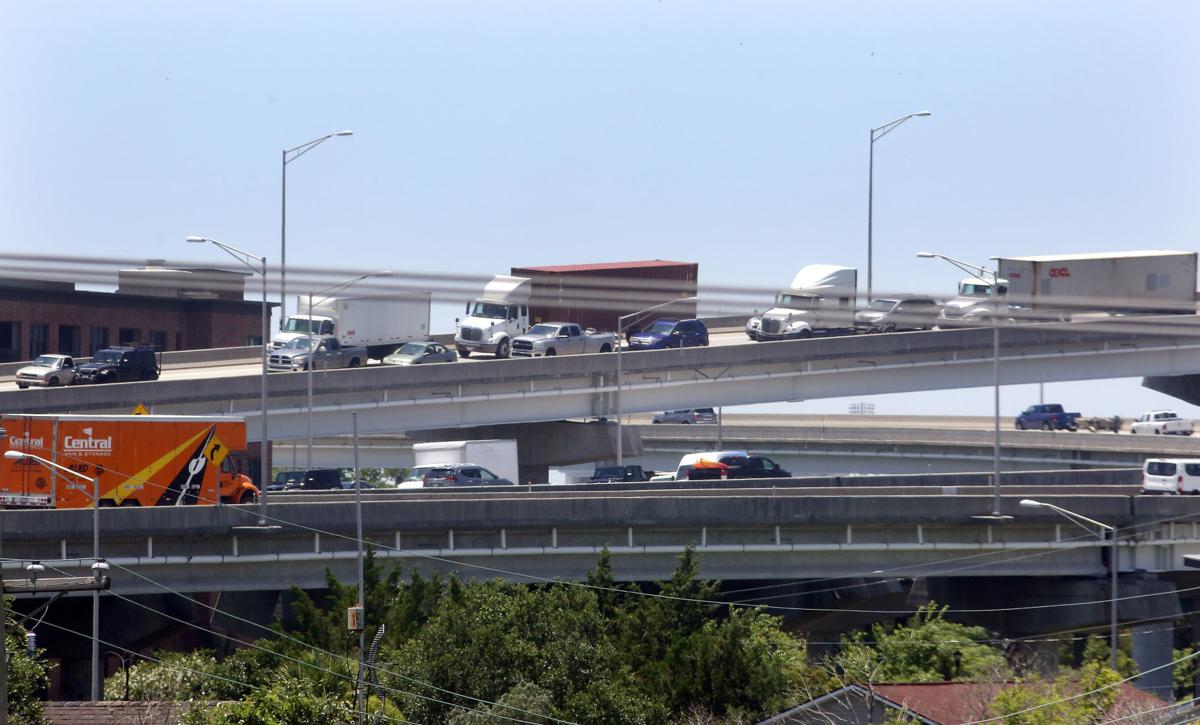 Traffic almost came to a stand still on the approaches to the Ravenel Bridge Wednesday, July 1, 2020, after an accident on the Don Holt Bridge involving a Charleston County Sheriff Deputy that closed the West bound lanes of I-526. Brad Nettles/Staff 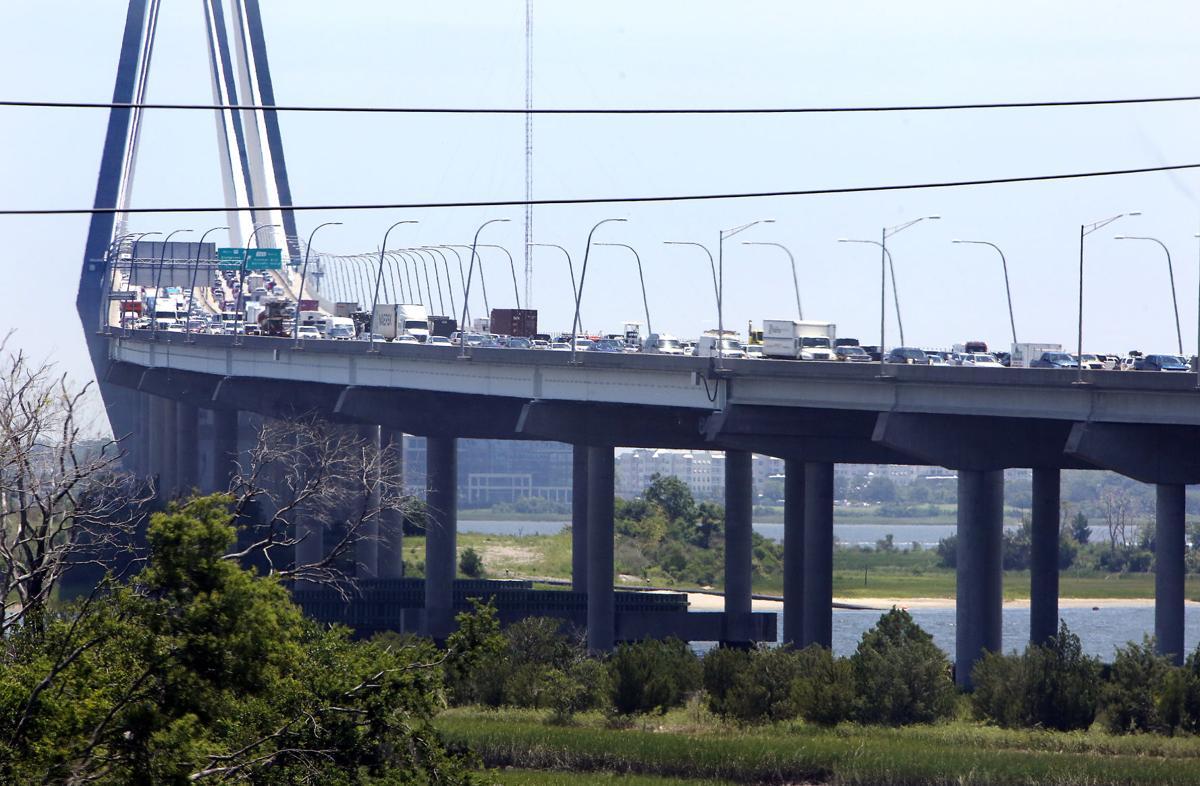 Traffic almost came to a stand still on the Ravenel Bridge Wednesday, July 1, 2020, after an accident on the Don Holt Bridge involving a Charleston County Sheriff Deputy that closed the West bound lanes of I-526. Brad Nettles/Staff 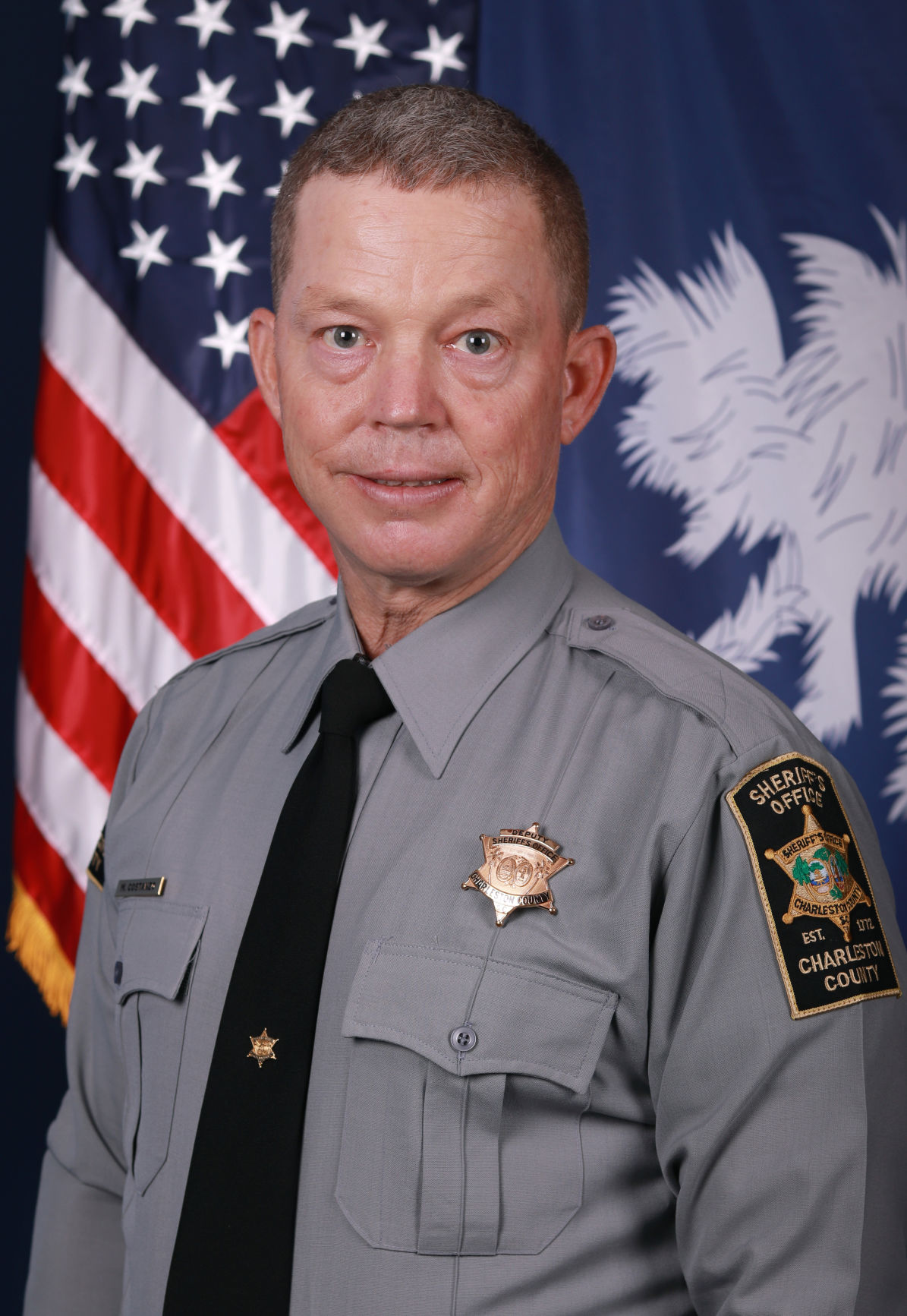 A woman is overcome with emotion at the scene of an accident on the Don Holt Bridge on Wednesday, July 1, 2020. File/Gavin McIntyre/Staff

Traffic almost came to a stand still on the approaches to the Ravenel Bridge Wednesday, July 1, 2020, after an accident on the Don Holt Bridge involving a Charleston County Sheriff Deputy that closed the West bound lanes of I-526. Brad Nettles/Staff

Traffic almost came to a stand still on the Ravenel Bridge Wednesday, July 1, 2020, after an accident on the Don Holt Bridge involving a Charleston County Sheriff Deputy that closed the West bound lanes of I-526. Brad Nettles/Staff

The Don Holt Bridge over the Cooper River again showed how dangerous traveling it can be after a horrific crash unfolded Wednesday that left a sheriff's deputy seriously injured and a tow truck driver missing — presumably plummeting from the bridge.

The deputy remained in a hospital while the tow truck driver was unaccounted for late Wednesday following a search of the waters 155 feet below the span by boat and helicopter.

The multivehicle crash on the bridge, which is part of Interstate 526 connecting North Charleston to Daniel Island and Mount Pleasant, took place just after the morning rush hour had peaked, but it would snarl traffic throughout the region for hours.

According to authorities, about 9:50 a.m. the Charleston County sheriff's deputy was driving west when he pulled up to help a tow truck driver who was helping the motorist whose vehicle had broken down on the North Charleston side of the span.

That’s when a westbound Ford F-350 pulling a trailer struck the rear of the deputy’s Dodge Charger, which, in turn, struck other vehicles, said Cpl. Matt Southern, a S.C. Highway Patrol spokesman.

The deputy, identified as Mike Costanzo, and the tow truck driver, were both outside of their vehicles when the collision occurred, Southern said.

When the tow truck driver could not be found, crews with the Coast Guard and local marine patrol units began a search of the Cooper River near the bridge.

"The driver of the tow truck remains unaccounted for at this time," Southern reported.

The driver's identity has not been disclosed.

The crash was met with shock by those who drive the bridge or represent constituents who do, as it draws a mix of port truckers and daily commuters in crowded lanes by the thousands.

"The accident is just absolutely horrible to read about and think about," said Charleston Councilwoman Marie Delcioppo, of Daniel Island.

Accidents and injuries have more than doubled on Ravenel, Don Holt bridges

"A large portion of my district, all of Daniel Island and the incorporated Cainhoy Peninsula, these are mostly families and they don’t want to have their teenage drivers get on 526," she said. "It’s the same with moms with little babies. It is scary to drive out there."

The Don Holt Bridge was built in 1992 and has a history of issues and bad crashes. The bridge's design doesn't make it easy for police and rescue crews to reach the scene of a wreck. There is no way off the elevated roadway between North Charleston and Daniel Island. It has no breakdown lanes, so a crash that jams traffic can force police and rescue crews to come from the opposite direction.

That, in turn, jams traffic in both directions.

But it is a vital artery for the region's travel grid. The Don Holt, combined with the James B. Edwards Bridge on I-526, and the Arthur J. Ravenel Jr. Bridge on U.S. Highway 17, are the only river crossings linking roughly 110,000 people east of the Cooper River to the rest of the greater Charleston area. Wrecks on the Don Holt and Ravenel bridges more than doubled from 2011 through 2016, and injuries from wrecks nearly tripled.

Authorities have blamed most of the collisions and accidents on drivers not paying attention, and many of the fatal accidents have involved drivers who struck vehicles that were disabled or stopped in traffic.

“One of the things I hear repeatedly is, tougher distracted driving laws," Delcioppo said. “Driving should not be a multitasking activity."

Many police in South Carolina not enforcing texting-while-driving law

The population growth in Mount Pleasant, Daniel Island and the Cainhoy peninsula, along with the growth of South Carolina's largest port — Wando Welch Terminal in Mount Pleasant — have put immense traffic demands on I-526 and the Don Holt Bridge. South Carolina is planning to double the width of I-526, including the river crossings, but planning is in the early stages and the price tag is in the billions.

SCDOT is currently studying the stretch of I-526 between North Charleston and Mount Pleasant, including the Don Holt, and has an online survey where area residents can share their concerns at https://526lcceast1.metroquest.com/.

Meanwhile, the bridges each average more than two wrecks a week, some of them fatal, and with wide-reaching ripples. A wreck on the Don Holt bridge tends to send a wave of traffic cascading through local roads, heading for the Ravenel Bridge, and the resulting heavy traffic sometimes results in yet more wrecks.

Costanzo previously worked for the sheriff's 1994-2006, according to a media announcement, then returned in April 2017.

He served as a school resource officer at Sullivan’s Island Elementary during the school year and was assigned to the Marine Patrol Unit this summer.