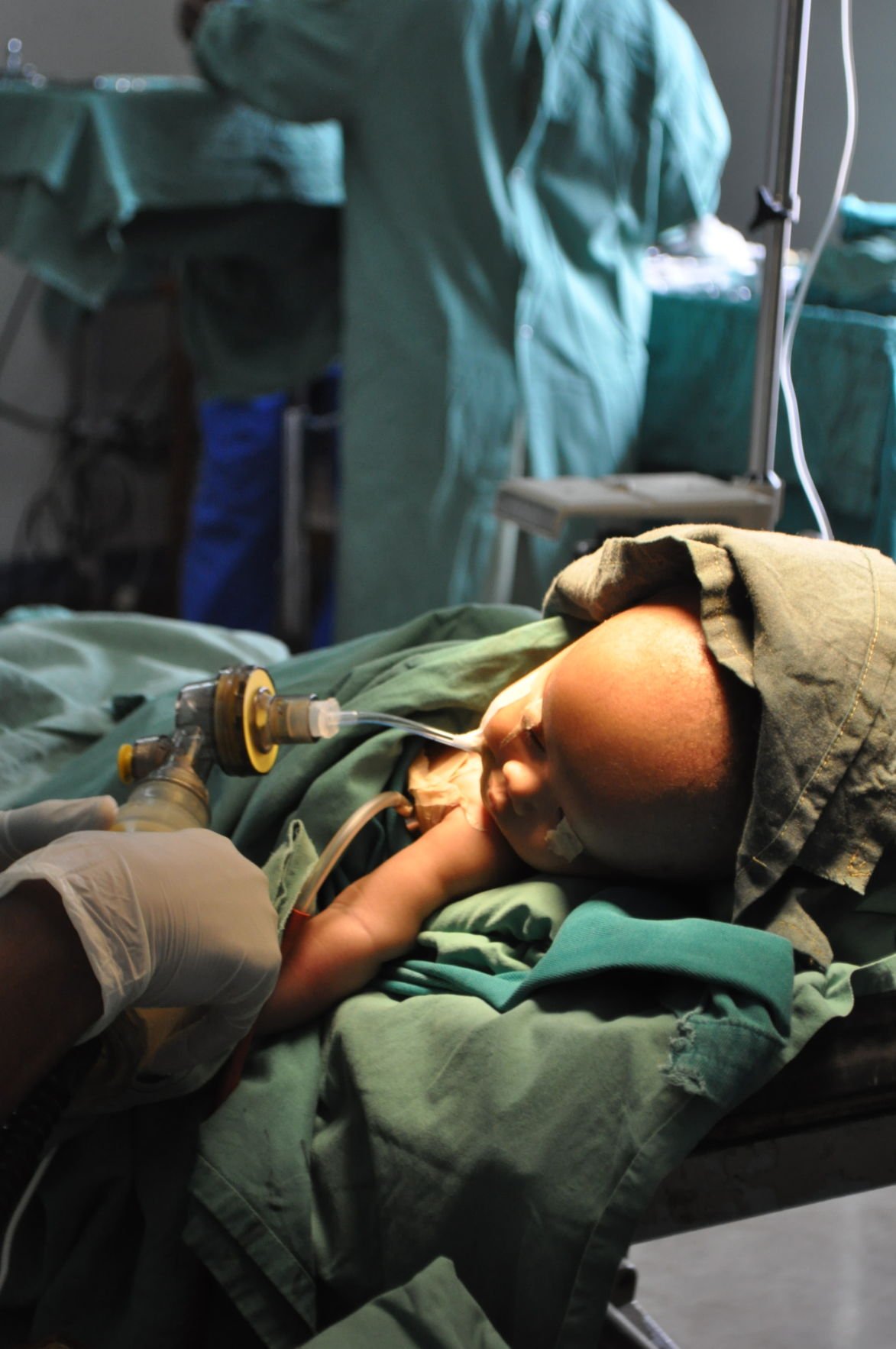 A missionary doctor from Germany prepares to operate on a baby with hydrocephalus in a remote hospital in Tanzania. Tony Bartelme/staff 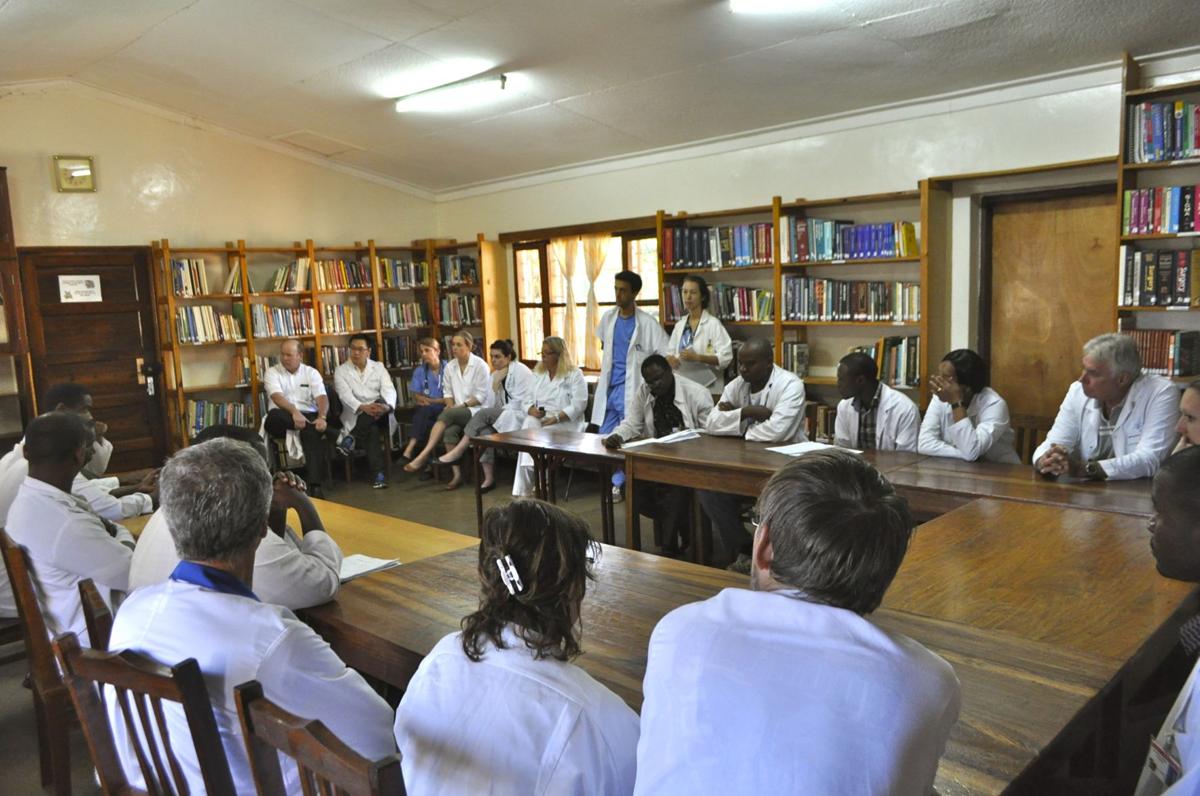 Haydom Lutheran Hospital is one of many missionary hospitals in East Africa. Doctors and students from Medical University of South Carolina have visited to both treat and teach. Tony Bartelme/staff 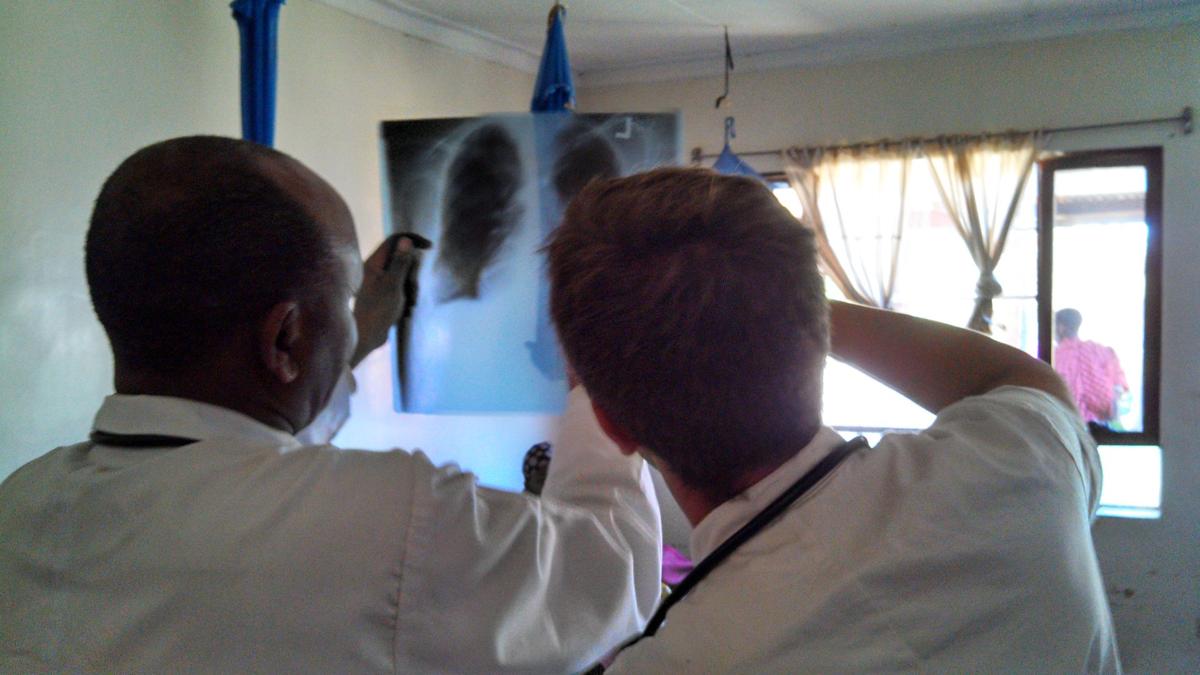 A Tanzanian doctor, Emmanuel Mayegga, goes over a case with a visiting medical student from Germany in a busy surgical ward in Haydom, Tanzania. Tony Bartelme/staff 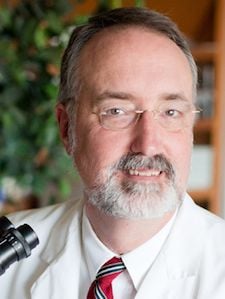 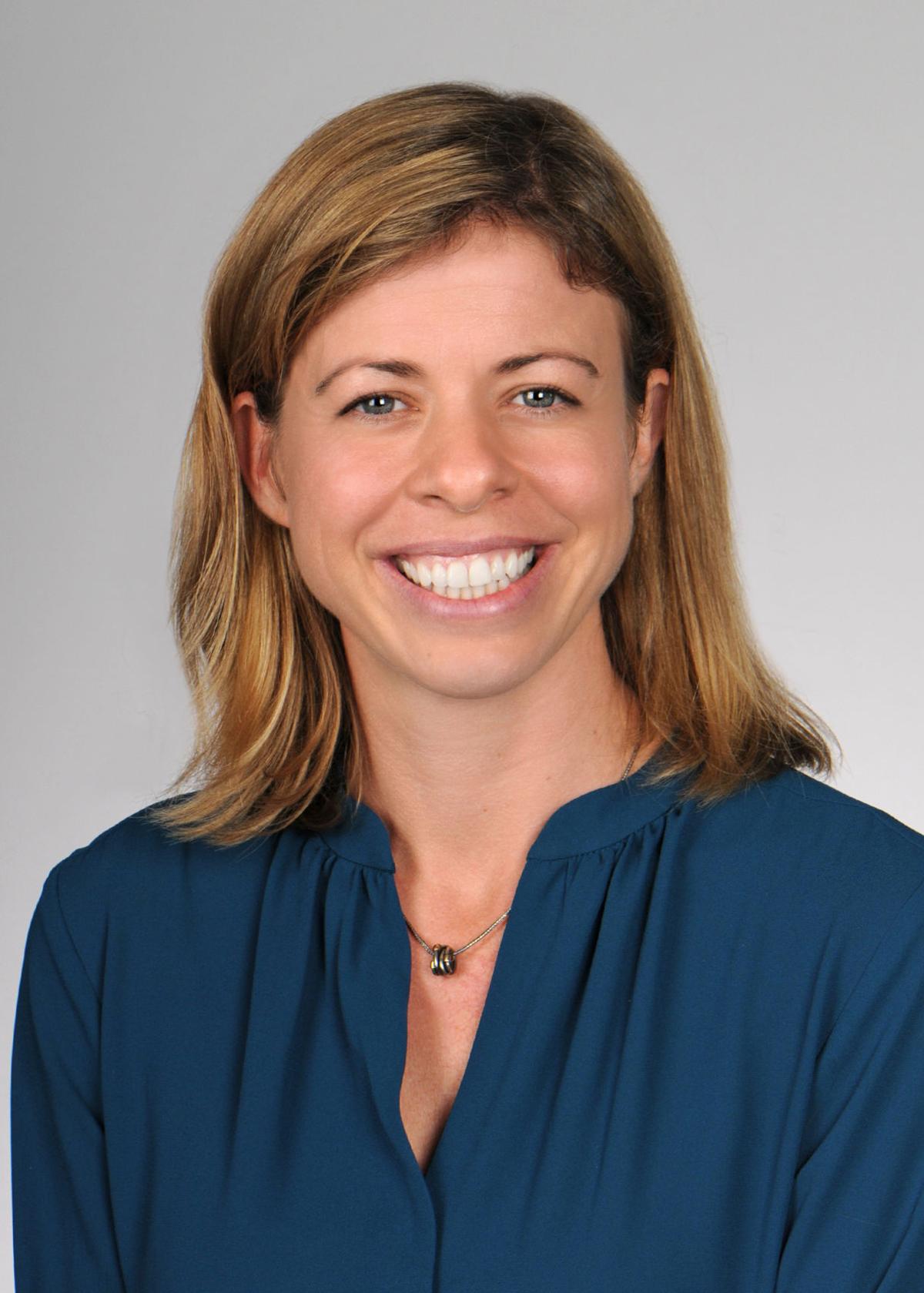 Ginny Fonner is an assistant professor within the Division of Global and Community Health in the Department of Psychiatry and Behavioral Sciences at the Medical University of South Carolina. Provided/MUSC

A missionary doctor from Germany prepares to operate on a baby with hydrocephalus in a remote hospital in Tanzania. Tony Bartelme/staff

Haydom Lutheran Hospital is one of many missionary hospitals in East Africa. Doctors and students from Medical University of South Carolina have visited to both treat and teach. Tony Bartelme/staff

A Tanzanian doctor, Emmanuel Mayegga, goes over a case with a visiting medical student from Germany in a busy surgical ward in Haydom, Tanzania. Tony Bartelme/staff

Ginny Fonner is an assistant professor within the Division of Global and Community Health in the Department of Psychiatry and Behavioral Sciences at the Medical University of South Carolina. Provided/MUSC

As a Peace Corps volunteer, Ginny Fonner worked in a rural village in Zambia, a southern African country with a severe shortage of doctors. While there, a short-term mission group visited. Their goal: distribute medicines to fight intestinal worms.

“It’s a great goal. Worms are a big problem,” she said during a recent global health symposium at the Medical University of South Carolina. “So they spent day after day going to schools, distributing treatments, feeling really good about it."

Except for one thing.

Fonner, now an assistant professor at MUSC’s Division of Global and Community Health, said short-term missions such as the one in Zambia often do more for the volunteers than the people they're trying to help.

Other critics have dubbed such missions “physician voluntourism” and their participants as “vacationaries.” Researchers also have raised questions about their high costs and the dangers of hit-and-run medical care.

At the same time, short-term missions, either for medical or other reasons, have never been more popular.

Cheaper air fares are part of the reason.

Missionary work once was a long-term vocation, especially given the difficulties of traveling to distant lands. Some in the 19th century were called “one-way missionaries” because they expected to die where they intended to serve.

“Fear not – if we are to live, labor, or die, in Java, all the world cannot keep us from it,” said A.W. Milne, a British missionary who worked in what today is Malaysia in the early 1800s.

But in the 1980s, international air fares dropped a third to what they were in the 1960s. Suddenly, people could do missions during their vacations and school breaks. In 1989, about 125,000 American Christians went on short-term missions. Now researchers estimate that more than 1.6 million do missions every year, spending $2.4 billion.

Exotic places are popular destinations. The Bahamas receives one short-term missionary for every 15 residents. Amid this explosion, the purpose of many missions shifted away from sacrifice toward self-enrichment.

“Let’s be honest,” said David Livermore, executive director of the Global Learning Center at Grand Rapids Theological Seminary. “Along with the seemingly more noble reasons for going on a short-term mission trip, many of us love the adventure of it all.”

“The allure of these trips is clear,” Fonner said during the MUSC symposium. “You get to go to a new country, experience a new culture, all the while helping people.”

“Multiply that by 20 and 30, and you’re talking about a lot of money, money that could be used in other ways to help.”

Fonner’s comments came during a formal debate with Jeffery Deal, a Charleston ENT-otolaryngologist. Among his many global health works, Deal has worked with Water Missions International, traveled to Liberia to fight the Ebola epidemic and managed a hospital in South Sudan.

During the debate, Deal said short-term missions aren't inherently bad. It depends on how they're executed. For instance, while in Sudan, he found himself in the middle of a seasonal meningitis epidemic.

“Before Ebola, it was the worst thing I’d ever seen. Dead children everywhere, tiny little graves everywhere. After a few months, we got together a small mission group, mostly made of students from here (at MUSC), and did a vaccination campaign for 9,000 children.”

Two years later when the epidemic returned, a UNICEF official showed him a map of those who had been stricken, he said.

“There was a blank spot where we had done the vaccinations. There were no deaths. They estimated that 128 children did not die.”

That original short-term mission, he said, “was extravagant. It was expensive and it was worth every penny and I would do it again in a heartbeat.”

A sociologist named Kurt Ver Beek of Calvin College in Michigan has done extensive work on the pros and cons of short-term missions. Based in Honduras, Ver Beek noticed how flights to and from the United States were crammed with people wearing colorful mission T-shirts. At the same time, he heard complaints from Honduran leaders.

"They said that a couple of those trips could fund a clinic with two or three Honduran doctors and nurses for a whole year."

Then, a hurricane left tens of thousands of Hondurans homeless, suddenly providing him with a unique way to study the efficacy of missions.

To help the Hondurans rebuild, a North American charity had sent about $1 million directly to local home builders. The same charity spent an additional $1 million on 31 mission teams. Comparing the two humanitarian approaches, he found that the local workers used their $1 million to build about 1,000 homes. Meantime, the 31 mission teams each built one home. Put another way, the local builders spent about $3,000 to build a house, while missionary teams spent roughly $30,000 - 15 times as much.

It was an interesting economic finding, but as a sociologist, Ver Beek was curious about people’s beliefs and actions. The mission-built houses were more expensive, but they might be worth it if the missions triggered lasting internal changes in participants and those they helped.

After extensive interviews, he found few changes in the Hondurans. In fact, some were troubled by how the visitors mostly had meals among themselves and took jobs away from local Hondurans. Most were simply grateful to have new shelter.

Meanwhile, the mission participants reiterated that their lives had been forever changed, that they’d given more money, prayed more often and changed their views about poverty.

But then Ver Beek and his team combed through donation records. They discovered participants generally hadn’t increased their donations. Many didn’t give anything at all after their trips. He concluded that short mission trips tend to confirm preexisting beliefs, and that mission participants are like “saplings” whose preconceptions are briefly blown but then sprang back when they return home.

Some kinds of short-term medical missions are more effective than others, researchers have found.

A Harvard study last year compared traditional short-term medical missions with other approaches. These alternative programs include ones in which entire operating suites are transported to needy areas, such as the Mercy Ships group, and specialty hospitals dedicated to specific procedures, such as the Aravind Eye Hospitals in India.

Researchers found a pattern: Short-term missions to treat simple procedures, such as tonsillectomies, generally were safe. But mission workers who did more complex operations had significantly higher mortality and complication rates. Death rates from hernia operations by short-term teams were 20-times higher than in high-income countries.

Meantime, the self-contained hospitals such as Mercy Ships and specialty hospitals did more procedures and had better results. The differences in complications and mortality rates were so marked that the study’s authors concluded: “Despite its ubiquity, the short-term temporary surgical mission’s role should be limited to areas and conditions for which no other surgical delivery platform is available.”

That's not surprising to many who have done short and longer missions. Just after medical school, Jennifer Whitfield Bellows, now global health track director at the University of Colorado School of Medicine, traveled to a remote village in Guatemala. Because the area had no physicians, she ended up being the area's primary doctor — even though she hadn't done her residency.

“I was in way over my head. We had a lot of child births, asthma, chest pains, gastrointestinal problems; I did CPR while on a boat. It was romantic and scary, and it totally opened my eyes to the dangers of what I was doing.”

Later in her global health work in Peru, Turkey and other countries, she found that visiting teams of doctors often failed to provide the necessary diagnostics and follow-up care.

“When you look at short-term missions, they’re really a travel service for Good Samaritans,” added Brian Mullaney, founder of WonderWork, a group that teaches local doctors how to treat blindness, burns and other medical problems. “They’re well-intentioned, but it’s an outdated model that’s not about solving the real problem.”

Proponents of short-term missions sometimes argue that some care is better than no care, even if they aren't cost-effective. Citing a Chinese proverb, Deal said during the MUSC symposium, "It's better to light one candle than curse the darkness."

“The greatest humanitarian disaster happening now is in the South Sudan, and almost all of the information we’re getting is from short-term missions. They’re a powerful voice for making people aware.”

Still, the trips can also lead to ambivalence.

During one to Nicaragua, Lefrak met a 14-year-old girl named Maria. He eventually arranged to fly her to the United States for an operation to replace a diseased heart valve and then send her back to Nicaragua. But back home she developed problems because of the country’s poor health care system and died. He said he still felt responsible for failing to come up with a follow-up plan for her care.

“I still have a picture of her. It all felt good at the time, but in my mind, it didn’t turn out well in the end.”

In the MUSC symposium, Fonner argued that “parachuting in and parachuting out to provide Band-Aid care is not enough.” A more sustainable approach is to help local communities build their health care systems so they can take care of their own people without foreign assistance. Instead of thinking of “volunteers and recipients, we need to think of them as partners,” she said.

Deal, an evangelistic Christian, agreed that partnerships are an important part of improving the effectiveness of missions. But he said faith-based organizations will continue to do missions.

“You can dislike and speak against (missions), but they will not stop," he said. "A much better thing to do is engage these groups and mold their efforts in ways that don’t do harm.”