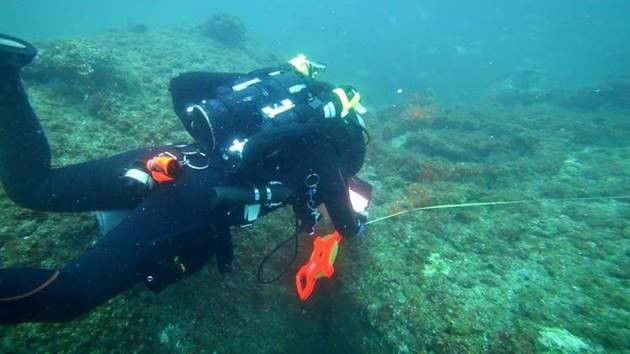 Diver Mike Barnette recently documented a shipwreck off the Florida coast as the SS Cotopaxi, a coal collier that disappeared mysteriously after setting out from Charleston in November 1925. The dive will be shown on the show "Shipwreck Secrets" on the Science Channel on Feb. 9, 2020. Science Channel/Provided 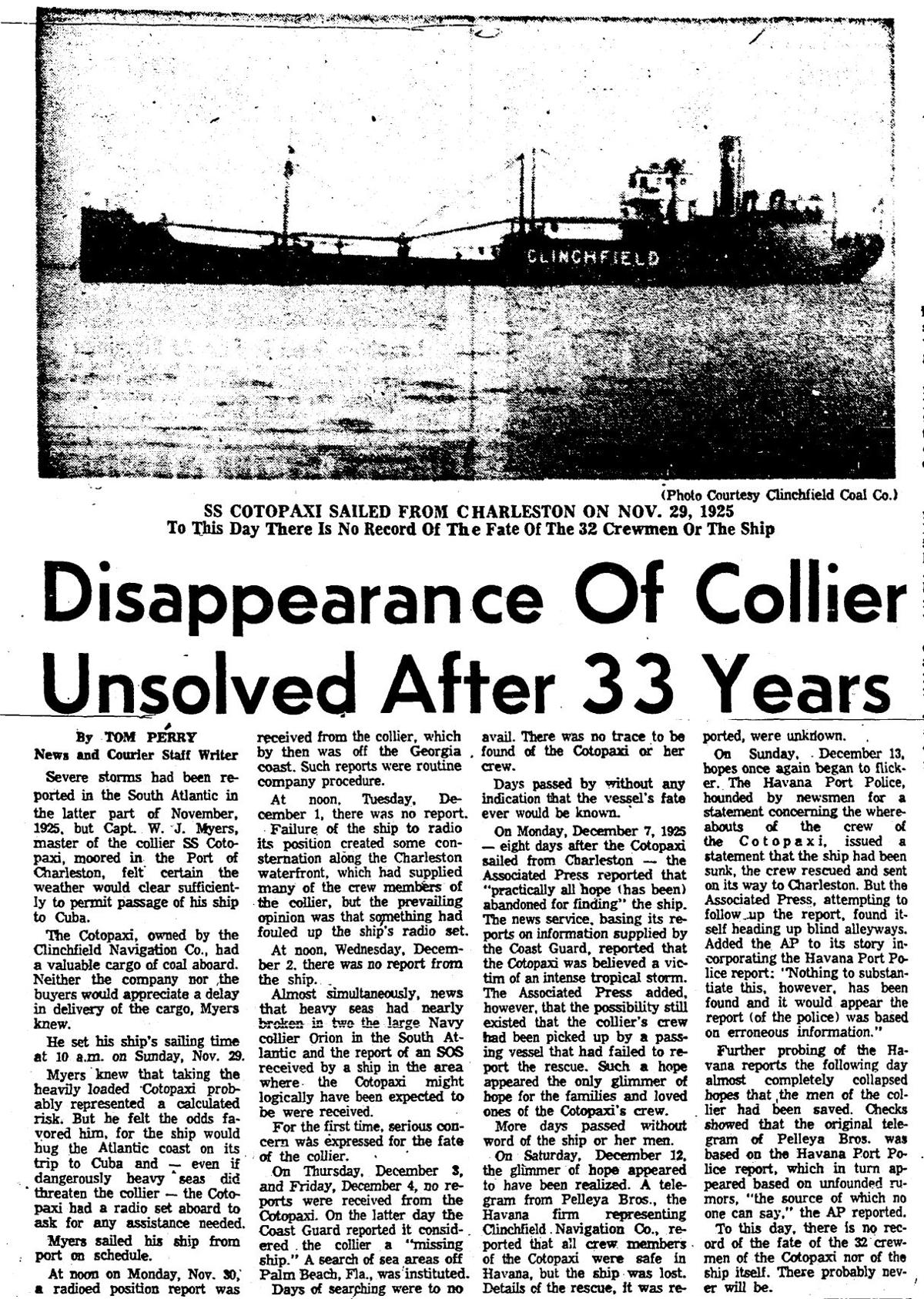 The mysterious disappearance of the Cotopaxi fueled speculation over decades, as in this 1958 article in The News and Courier. File 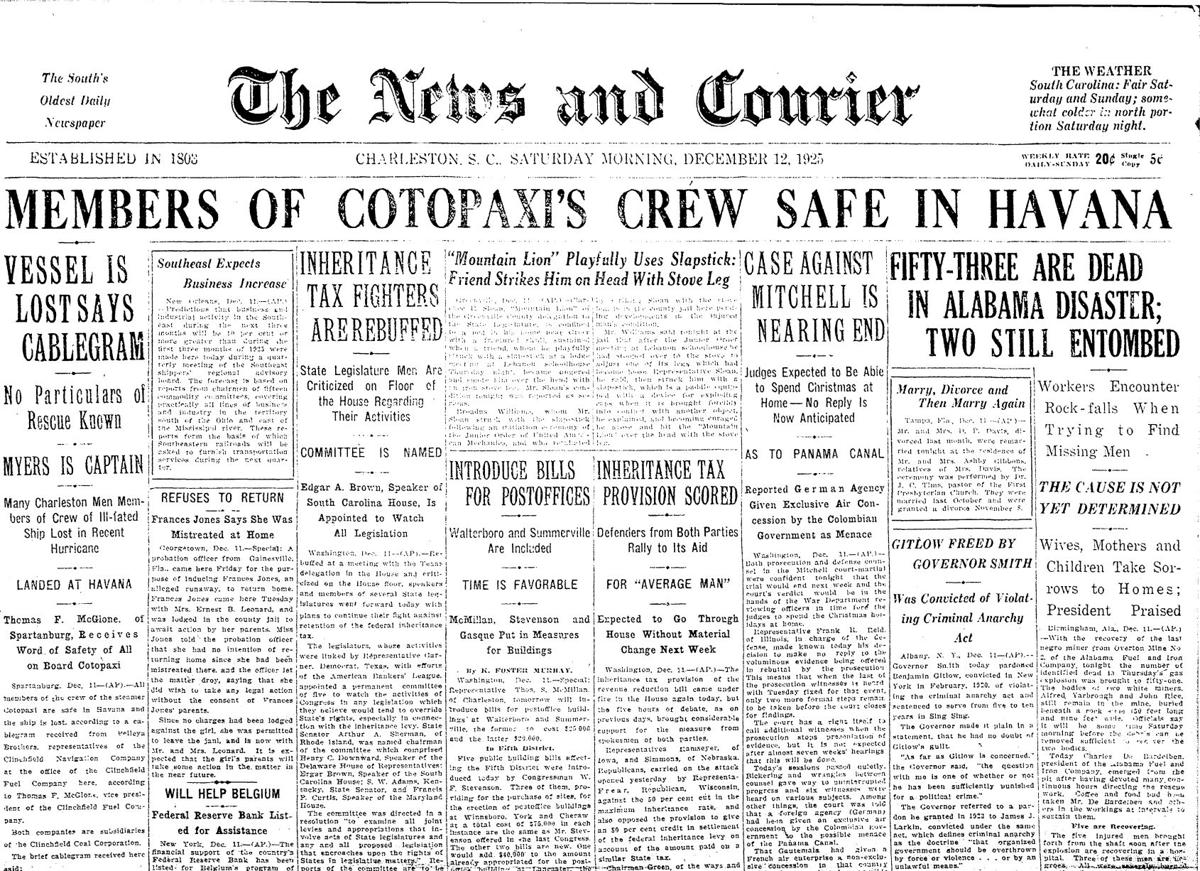 Shortly after it was declared lost at sea, the 32 members of the SS Cotopaxi were thought to be safe in Cuba, but this report was later debunked. Families of the crew, who were mostly from Charleston, later sued the company that owned the boat unsuccessfully. File

A diver recently discovered the answer to a mystery in plain sight: A ship that had set out from Charleston almost a century ago but never reached its destination was sitting on the ocean floor off the coast of Florida.

The finding caps decades of speculation over the fate of the SS Cotopaxi, which was thought by many to be a victim of the Bermuda Triangle, even making a cameo in a Stephen Spielberg film about alien visitors.

After carefully examining the features of the wreck and comparing them to insurance records, he determined it was the Cotopaxi.

For the Rev. Gregory West, the find solved a more personal mystery, giving him closure for the first time about the fate of a family member.

"It's a relief to know exactly what happened because we were always told he disappeared somewhere in the Bermuda Triangle," said West, a Charleston resident and native.

"Especially as kids, that was this great mystery and all kinds of imaginations would run wild as to exactly what happened," he said.

The Cotopaxi, a coal-carrying steamship of about 260 feet long, carried a crew of 32 when it set off for Havana, Cuba, in late November 1925. Most of the crew were Charlestonians, including West's great-uncle, Robert P. Fulcher.

Fulcher was the oldest boy among eight children, part of a working-class family that lived in an alley off East Bay Street, West said. His father worked at a quarantine station at Fort Johnson, and Fulcher himself worked there for a time in between stints in the Navy and on a passenger steamer that ferried people to New York City.

By 1925, he was second mate on the Cotopaxi. The ship was built toward the end of World War I for the war effort and named for a small Colorado town that had been particularly successful in a war bond drive. It was eventually acquired by the Clinchfield Coal and Navigation Co. of New York.

Aside from once being seized in 1920 with contraband alcohol, according to a News and Courier article then, it was largely used to ferry coal to market in Havana, Galveston and elsewhere.

While the ship had set out on a typical run to Cuba on Nov. 29, 1925, newspaper reports about how it encountered trouble are thin. News and Courier articles indicate the ship at one point radioed Charleston to report its hold had taken on water and was listing to one side.

After that, radio communications stopped.

About two weeks after the collier departed, The News and Courier ran a front-page report that the crew had been found safe in Cuba, while the ship itself was lost.

That report was later debunked, and the families of the crew eventually tried to sue Clinchfield for $1 million, or almost $15 million in today's dollars.

Barnette's research relied heavily on documents and testimony from that lawsuit, which showed the ship was in a state of disrepair and unable to weather a serious gale.

A judge, however, ruled in 1928 the sinking of the Cotopaxi could only be blamed on a storm, and the company was not liable, according to a New York Times report from that year.

Barnette said his work doesn't change the end of the story.

A shifting wreck off SC has become a serious threat, sinking and damaging unaware boaters

"We know the loved ones are lost, but at least now (the families) have some closure," he said.

West's grandmother, who was Fulcher's youngest sister, was hesitant to discuss her brother's disappearance in front of her grandchildren while she was alive.

"I think it was very tragic to the entire family," West said.

West said he did not know the name of the ship his great-uncle died on until after the 1977 release of "Close Encounters of the Third Kind," in which the Cotopaxi miraculously shows up in the Gobi Desert after having disappeared in the Bermuda Triangle.

The film got the real story wrong in two respects, Barnette said. First, it depicts a ship of the same name that was built later — not the much-smaller Cotopaxi that sank in the 1920s.

And second, it perpetuated the myth of the ship being lost in the Triangle, an area between Florida, Bermuda and Puerto Rico where dozens of other ships and planes have disappeared.

"I kind of have a love-hate relationship with the Bermuda Triangle, because it takes away from the real story, the real drama," Barnette said.

The dive that confirmed the wreck will be aired Sunday on “Shipwreck Secrets” on the Science Channel.

Mike Barnette's work in locating the S.S. Cotopaxi will be highlighted in the Science Channel show Shipwreck Secrets. The show will air on Feb. 9 at 8 p.m.