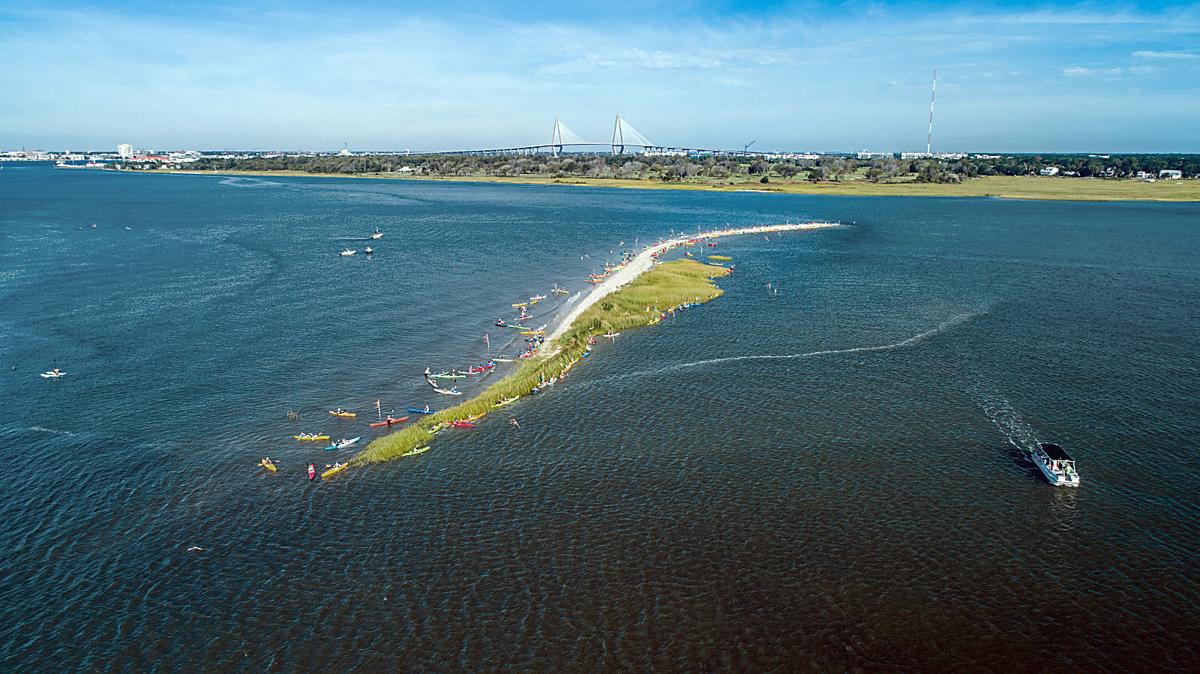 More than 150 kayaks and paddleboards surrounded Crab Bank in Charleston Harbor in 2018 to show support for restoring it as a rookery. File/Adam Boozer drone photo 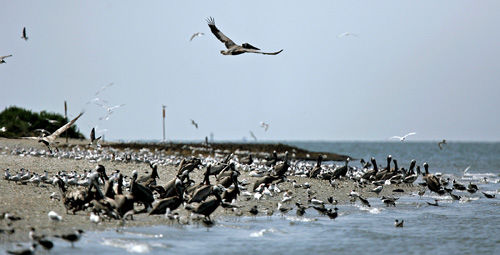 Birds flocked to nest on Crab Bank during its heyday before erosion ate away at the high grounds. File/Staff

The pivotal shorebird rookery of Crab Bank in Charleston Harbor inches toward renourishment as it continues, inch by inch, to lose sand.

The best start date now for the long-awaited project is sometime in 2021.

That timing might depend on whether Mount Pleasant concerns can be eased about what the town sees as the possibility of renourishment soil eventually silting in the town's landmark Shem Creek fishing hub nearby.

The best news for conservationists and people who donated money to the cause is that one of the contractors handling the overall Charleston Harbor deepening — Norfolk Dredging, took an option to add the rookery renourishment to its work.

Because a new contractor doesn't have to be brought in, the cost is now $377,000 — well below original estimates. The funds raised for the project would pay $130,000 of that, with U.S. Army Corps of Engineers funding paying for the rest.

The rest of more than $1 million in contributions and a $700,000 federal grant will be used for building oyster reefs and adding sea grasses meant to hold renourished sand in place.

It could also provide seed money for the S.C. Coastal Bird Conservation Program coalition's ongoing shorebird conservation efforts. The money is being held by the S.C. Department of Natural Resources, a partner in the program. The further uses of the money were delineated as part of the fundraising.

Fundraising to pay for the renourishment, organized by partners who eventually helped form the program, began in January 2018 with an original goal of an estimated $1.25 million needed and a deadline thought to be little more than a year. The estimate eventually became $2 million. The federal grant saved the day.

The lengthy federal contracting process and having to meet both federal and state agency requirements, "were not completely unexpected," said Caroline Bradner, land, water and wildlife manager for the Coastal Conservation League, a program partner.

"It's much more winding and convoluted than we might have had with a more straightforward project. We'd like to see the bank back as quickly as it can be done," she said.

Crab Bank was a vital seabird and shorebird rookery in Charleston Harbor. At its peak, the island covered more than 18 acres and almost 4,000 birds nested there. But by 2018, erosion had cut the high ground to about a 1 acre and no birds nested.

Plans call for the bank to be renourished using some 600,000 cubic yards of bottom soils dredged from the Charleston shipping channel deepening now underway.

Mount Pleasant officials objected to preliminary plans to renourish the island, saying the configuration would worsen silting in the mouth of Shem Creek, which already must be dredged periodically. They and the Army Corps are in ongoing discussions over how to remedy that.

After a meeting among agencies and federal legislator staff two weeks ago, the town came away "quite concerned," said Mayor Will Haynie. He wouldn't comment on whether the town would pursue a lawsuit but said it's "getting advice for all options that might be available to us."

Brian Williams, the Army Corps' civil works chief for the Charleston District, said design tweaks have been made in response to the town, but with the bank continuing to erode, engineers will wait until the renourishment is about to begin before assessing the work to see if more are warranted.

"We don't know what condition Crab Bank will be in," he said.

The bank, now a thin strip of an island in the harbor near Mount Pleasant, was one of five protected rookeries that helped make for the eye-catching flocks of seabirds and shorebirds that are a wonder of the Southeast coast — from pelicans flying in formation by the dozens to black skimmers and oystercatchers hunting inches above the water.

The rookeries are tiny, uninhabited swaths of sand and reeds where the birds nest in huge flocks of mixed species, relatively safer from predators and human disturbances. They are vital habitat for troubled and threatened species.

Each is critical because individual islands tend to wash out, and because a tropical storm or hurricane can wreak havoc on any one of them. Crab Bank is the only one located in the relative safety of a harbor.