Charleston was the entry point for at least 100,000 slaves who were captured from West Africa and shipped into the United States. And even when the global slave trade ended in the early 19th century, the city continued protecting the institution of slavery until the end of the Civil War.

Now, the city is poised to formally apologize for all of that. But does the apology go far enough?

That's one point of debate surrounding the proposed resolution City Council will consider at its meeting Tuesday. The two-page document apologizes on behalf of the city for its role in the slave trade, its support of slavery and for enforcing Jim Crow-era laws.

The vote falls during a week of events commemorating the three-year anniversary of the racially charged shooting at Emanuel AME Church.

Councilman James Lewis, one of the longest serving black council members, said he's probably going to support the proclamation but he's not particularly passionate about it. He said he hasn't heard from any of his constituents urging him to vote one way or the other.

"A resolution does nothing," he said. "It apologizes for something that happened before our time."

"We have to start somewhere and get to a point where we can move forward," he said. "So, as a city, we are starting now."

Charleston City Council will vote whether or not to adopt an official apology for the city's role in slavery and the Jim Crow era.

On social media, some felt the city had a duty to make reparations to descendants of slaves, which means the making of amends by paying money or otherwise helping those who were wronged.

A Twitter user named @PrinceLlewellyn based in Columbia wrote that Charleston should have already apologized.

"60% of the over 300,000 enslaved Africans brought to the US came through Charleston. Not only do we deserve an apology; we deserve REPARATIONS!"

Apologize??? The economy of Charleston, hell, the majority of South Carolina is BUILT on slavery and the compounding interest. Never built much manufacturing as a result. If there’s any place where reparations should be paid it’s SC. https://t.co/KMqdNwFBri

They should have ALREADY apologized! 60 % of the over 300,000 enslaved Africans brought to the US came through Charleston. Not only do we deserve an apology; we deserve REPARATIONS! https://t.co/g4hykqx4Sj

The resolution does have tangible goals. It calls for the creation of an office of racial reconciliation, which would help uncover racial disparities in the community and serve people who feel they're being discriminated against.

"Until we can cut out the systemic parts of our institutions that contribute to discrimination, no matter how subtle they may be, we will never really become whole," said Councilman William Dudley Gregorie, also a black member of council and who proposed the resolution.

Other goals in the doctrine include:

Dot Scott, president of the Charleston NAACP, said redirecting policies related to housing, education — even the location of paved bikeways — are concrete ways in which the city can make a real difference.

"These things are what we need for survival," she said.

The city must apologize for the role it played in the institution of slavery but it's not a fix-all, said the Rev. Nelson Rivers III.

"At a minimum, you can say, 'I'm sorry,'" he said. "An apology without policy is worthless."

Rivers leads the Charity Baptist Church in North Charleston. He is also a vice president of the social justice organization National Action Network.

Gadsden's Wharf, on the eastern side of the peninsula, served as a major entry point in the African slave trade. That's where the new International African American Museum will be built, another major aspect of the city's efforts to fully acknowledge its flawed history.

Over the past few days, city officials have been circulating a number of historical texts to council members and anybody else looking for information about the city’s long history of supporting slavery.

One such document is an ordinance the then-City Council passed in 1837 that details how the city funded and ran the so-called Work House, once connected to the old City Jail on Magazine Street. It was essentially a torture chamber — a disciplinary facility where criminals and slaves were sent to be executed, beaten or chained to a treadmill to grind corn.

It’s no longer standing today and there are no historical markers acknowledging the site. It's mentioned in some historical texts and more recently, in novelist Sue Monk Kidd’s "The Invention of Wings." Other than that, information about it is scarce and difficult to find.

During the antebellum period, the city didn't merely condone slavery. It regulated it through "slave tags" — metal badges issued to slaves hired out for work across the city. These tags denoted the slave's working status.

The city later banned slave auctions from its streets, forcing them into auction houses. One of these houses, Ryan's Mart, survives today on Chalmers Street, where it is now the city-run Old Slave Mart Museum.

In 1860, about four million slaves were shared between the Southern states. But it was only in South Carolina and Mississippi where slaves outnumbered free men and women, according to the 1860 census.

Not all onlookers are thrilled about the fact that Charleston is taking responsibility for its history.

Donald Robertson, a Hanahan resident, told The Post and Courier he hopes the city will reject the "ridiculous" resolution.

"Nobody in this era was even born then," he said. "I had nothing to do with that."

Councilman Kevin Shealy told the newspaper last week that he was inclined to vote "no" on the resolution.

"I’ll need to listen to some of my other council members to make the best decision on this," Shealy, who is white, said Monday.

Those who disagree are missing the point, Councilman Gregorie said. Gregorie has been working on the draft of the resolution with the city's legal department and the Social Justice Racial Equality Collaborative since August of 2017.

The apology is on behalf of the city — not individuals, he said.

Gregorie said he hopes to see supporters of the resolution spilling out onto Broad Street on Tuesday night.

"I think it's important for our city," he said, "if we want to really move forward with racial relations, that we first recognize our role in enslaving African-Americans."

Virginia was the first state to formally apologize for its role in slavery and the Jim Crow era in 2007. State leaders met in Richmond, Va. — the most prominent former capitol of the Confederacy — and unanimously passed a resolution expressing "profound regret" over the state's history.

Months later, lawmakers in Alabama, Maryland and North Carolina followed suit. In 2008, New Jersey and Florida approved official apologies, followed by Tennessee and Connecticut in 2009. Delaware became the ninth state to apologize in 2016.

Cities have also moved toward apologies of sorts, though there is no comprehensive list of cities that have done so, said National League of Cities spokesman Tom Martin.

In 2007, the mayor of Macon, Ga., issued an executive order apologizing for the city's role in slavery. During the same year, the City Council in Annapolis, Md., — a former slave port city — proposed an apology for "perpetual pain, distrust and bitterness" caused to African-Americans.

In June 2015, shortly after the shooting at Emanuel AME Church, New Orleans Mayor Mitch Landrieu apologized for his city's role in the slave trade. 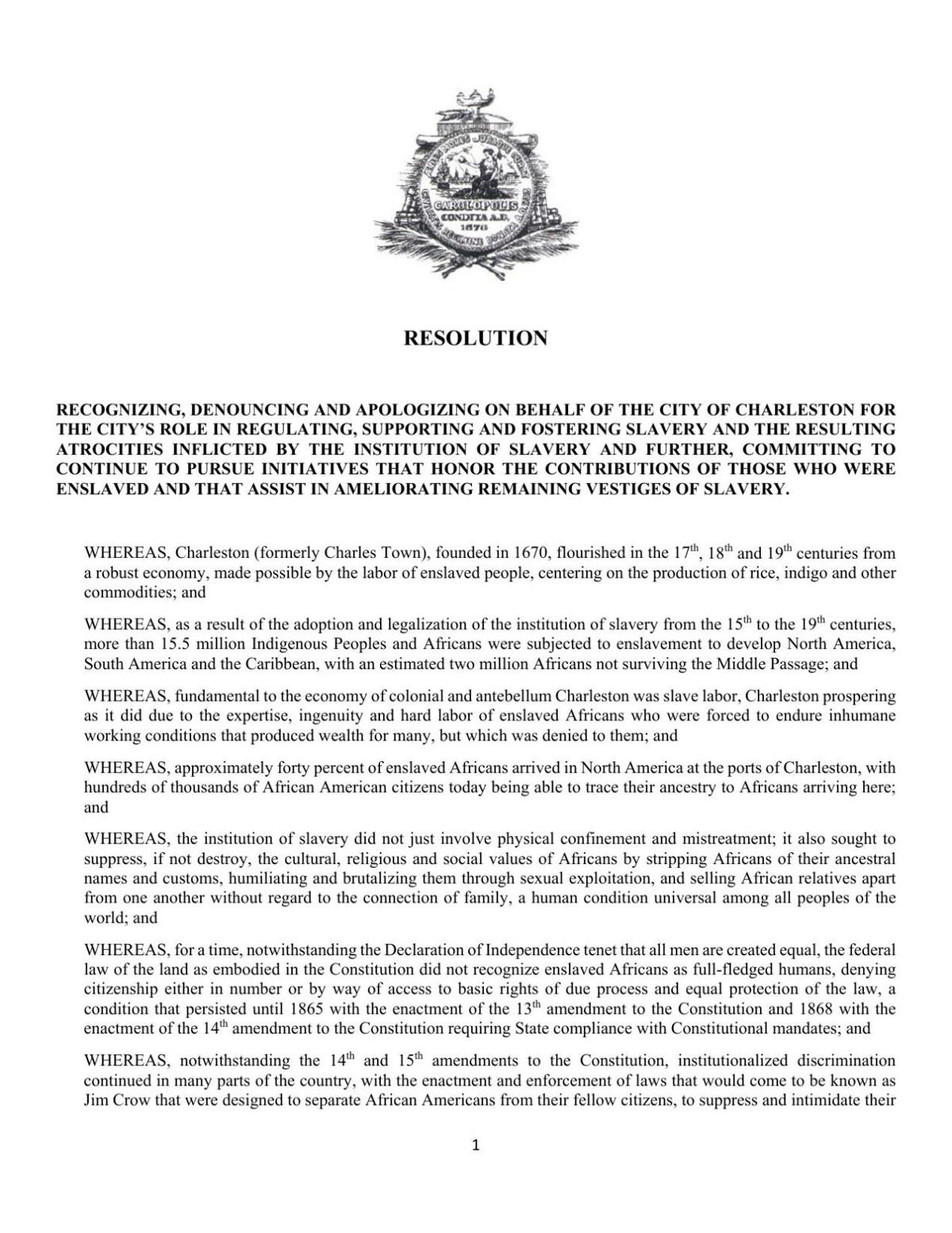