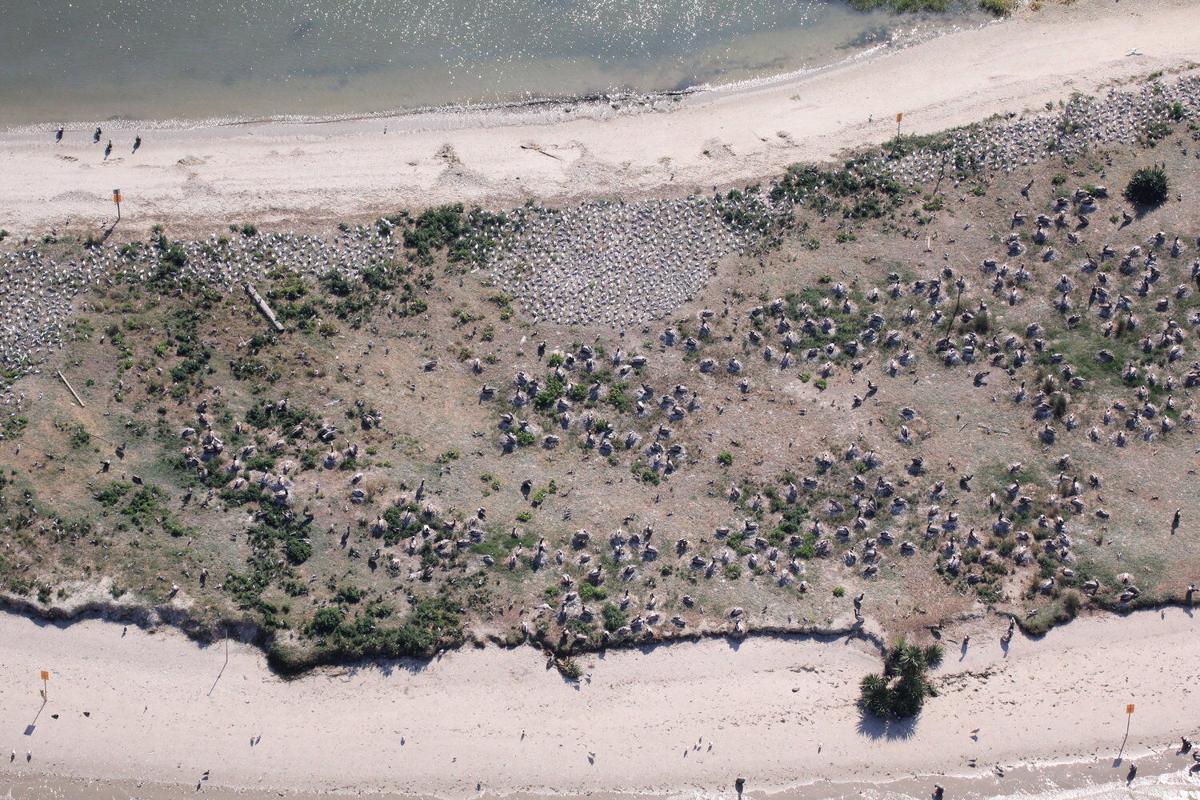 The Crab Bank seabird sanctuary in the Charleston Harbor has eroded to just a sliver of land. Renourishment efforts are expected to begin in September 2021. Cristy Hand/SCDNR/Provided 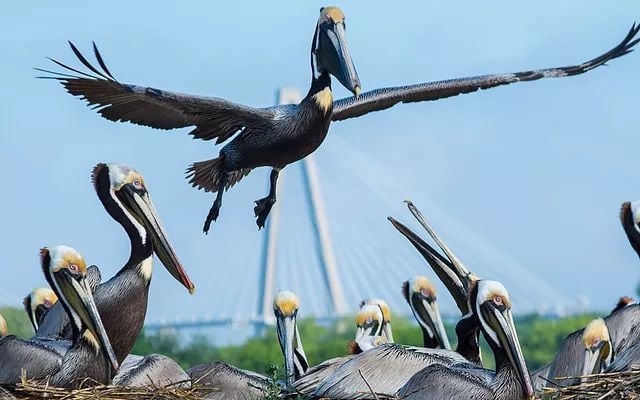 Shorebirds, such as pelicans, flocked to the Crab Bank rookery before it eroded away. Andy Hollis, Coastal Conservation League/Provided

There is now a projected completion date for the work to restore 28 acres of prime nesting habitat for coastal birds at Crab Bank.

But Mount Pleasant officials still have concerns about where the sediments will be dumped to renourish the island in Charleston Harbor.

Mount Pleasant Town Administrator Eric DeMoura said sediment from the harbor-deepening project is slated to go on the side of the bank that is closest to Shem Creek, instead of on the opposite side that is farther out at sea.

Crab Bank is typically an eyebrow-shaped area, but it has eroded to just a sliver in recent years because of hurricanes and tides. The rookery had nearly 4,000 birds nesting on 18 acres of high ground at its peak.

S.C. Department of Natural Resources spokesman David Lucas said there was no nesting on the bank this past season or the season before.

“Now, it’s not being used by the birds for that at all because so much of it — the high ground — has gone away,” Lucas said. “It’s really just a sliver remaining of what it was to start with, so that’s kind of the impetus for the project, the renourishment project.”

Work to restore the bank is slated to start next September and should be complete by the winter of 2021. It must be done by November 2022. About 660,000 cubic yards of sediment will be placed within Crab Bank’s footprint.

The town of Mount Pleasant has spent nearly $170,000 to assess the project's impact. DeMoura said if the sediment is placed where planned, it runs the risk of creating a land bridge on the part of Crab Bank that is closest to Hog Island.

"It's so shallow that if they place the material there, it'll fill in the area, potentially creating a land bridge for predators, which would destroy the renourished habitat," DeMoura said.

In addition to this, DeMoura said, the town's models show that the channel taken by commercial boats to leave Shem Creek could silt in within a couple of years if the material is deposited as planned.

The deepening project will take the Charleston Harbor from an average of 45 feet to 52 feet, according to Jeff Livasy, civil works chief for the U.S. Army Corps’ Charleston District.

The Corps is responsible for issuing permits for the disposal of dredge material. Dredging is essentially the removal of sediments and debris from the bottom of water bodies, according to National Ocean Service.

Livasy said the Corps considers ways to dispose of dredge spoil material for any planning study they do.

“The vast majority of dredge material goes into either an ocean disposal site offshore, or it goes to upland placement areas such as those along Clouter Creek,” Livasy said.

But the Corps also considers environmental opportunities that would benefit from the dredged material in the least-costly way.

It was decided that Crab Bank was the most fitting site to place the material from the harbor project. However, it posed an additional cost because equipment has to be brought in to get the work done.

So, Livasy said, DNR asked to become a project sponsor to provide additional funding for putting the material on Crab Bank. The total project cost is $230,000. Approximately $80,000 of the cost has been funded by DNR, he said. The Corps pays the rest.

Lucas said DNR undertook a major fundraising effort with the support of other groups to obtain its share of the cost.

Corporations such as The Post and Courier Foundation, Boeing S.C., the S.C. Ports Authority and hundreds of Charleston-area residents have contributed.

More than $1 million in contributions have been given, including a $700,000 grant awarded to Audubon South Carolina from the National Fish and Wildlife Foundation.

DNR plans to use the surplus funding to coordinate other programs to help shorebirds up and down the coast through the Coastal Bird Conservation Program that it manages.

"It'll also leave an additional amount of money that will allow us — once that sand is in place on Crab Bank — probably to do some additional shoreline enhancements like placing spartina grass, other things that'll be designed to keep the sand in place and to create better habitat there on the island," Lucas said.

Some of the money has already been used to fund a shorebird steward position for the Cape Romain National Wildlife Refuge in Awendaw.

DeMoura said he has no doubt that when a final decision is made on the plans for Crab Bank, the Corps will agree to move the sediment’s placement to where the town requests, on the side of the bank farther out at sea.

“To place it on the other side, you still get your habitat,” DeMoura said. “Everybody wins, right. The habitat is restored, and we have much less risk if they placed the material there.”

Lisa Metheney, head civilian of the Corps' Charleston District, said before work is started, the agency will take surveys of the island to see how it looks and them meet with the contractor to discuss how the bank will be constructed.

"And then, you know, we'll talk about exactly where the sediment needs to be placed," Metheney said.

She said she has committed to talking with DeMoura and Mount Pleasant Mayor Will Haynie before construction starts to lay out the plan and listen to additional concerns they may have.

Livasy said there is some potential for contractors to finish the renourishment work early, but he doesn't want to overpromise.

Once the process is underway, pumping lines will disrupt recreational boating traffic in the harbor. But the entire area won't be blocked. A navigation notice will be issued, plus lines will be marked and lighted.

The Army Corps will continue to closely track the progress.

Shamira McCray covers climate change and the environment for the Post and Courier.