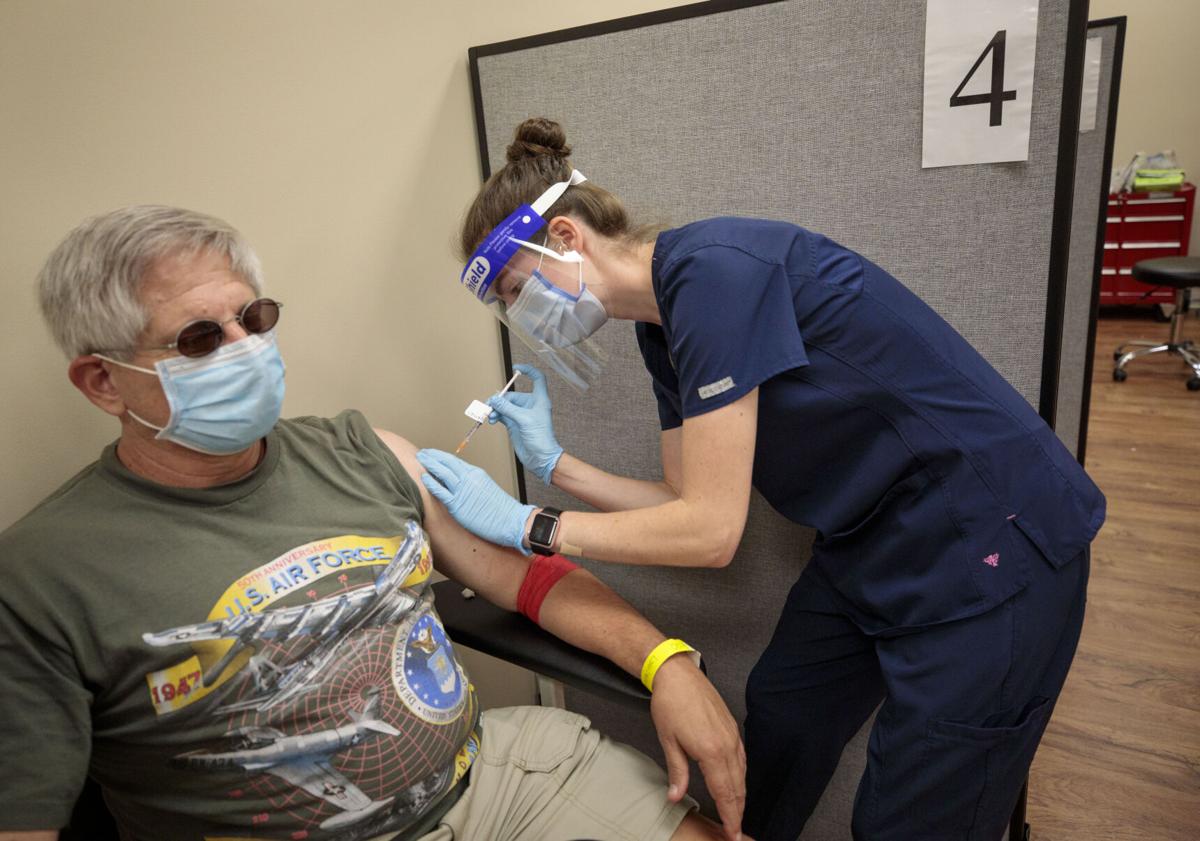 Nurse Autumn Shavalier gives an injection of what could be a vaccine for COVID-19 at Clinical Trials of South Carolina on Wednesday, Sept. 2, 2020, in North Charleston. File/Andrew J. Whitaker/Staff 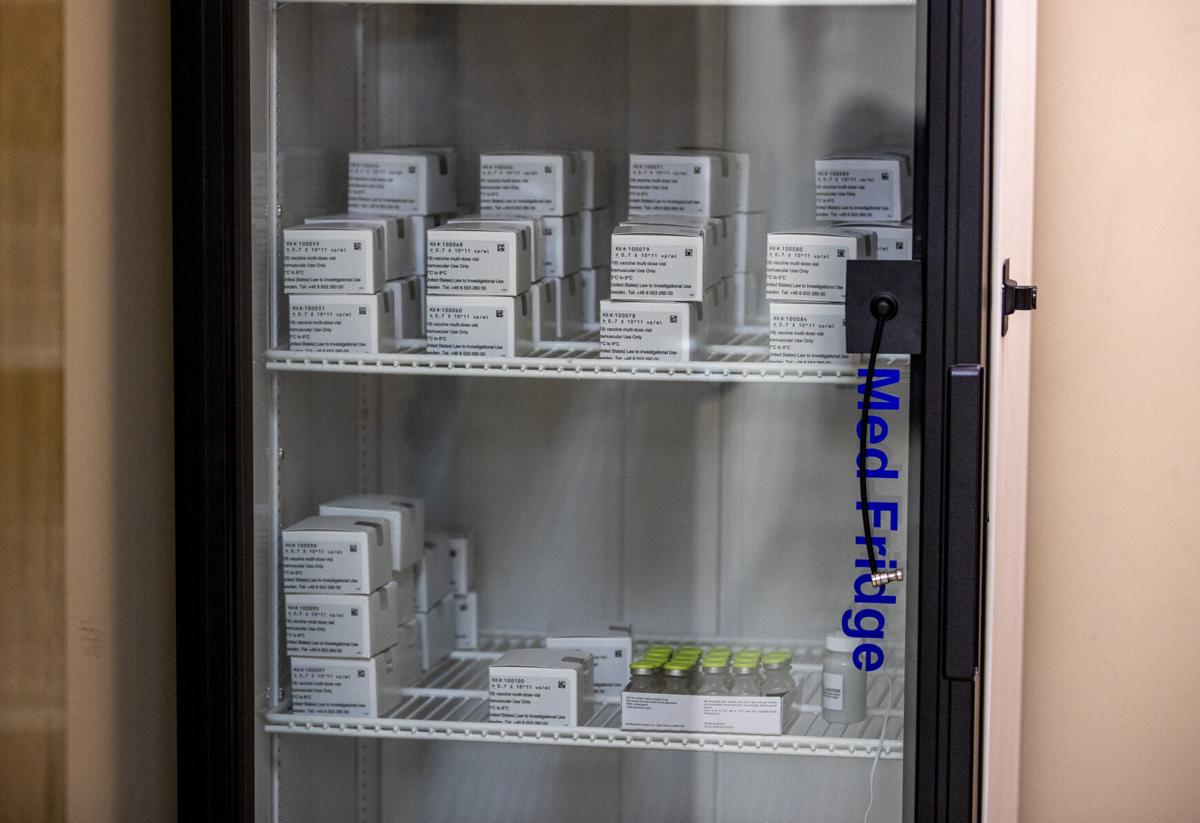 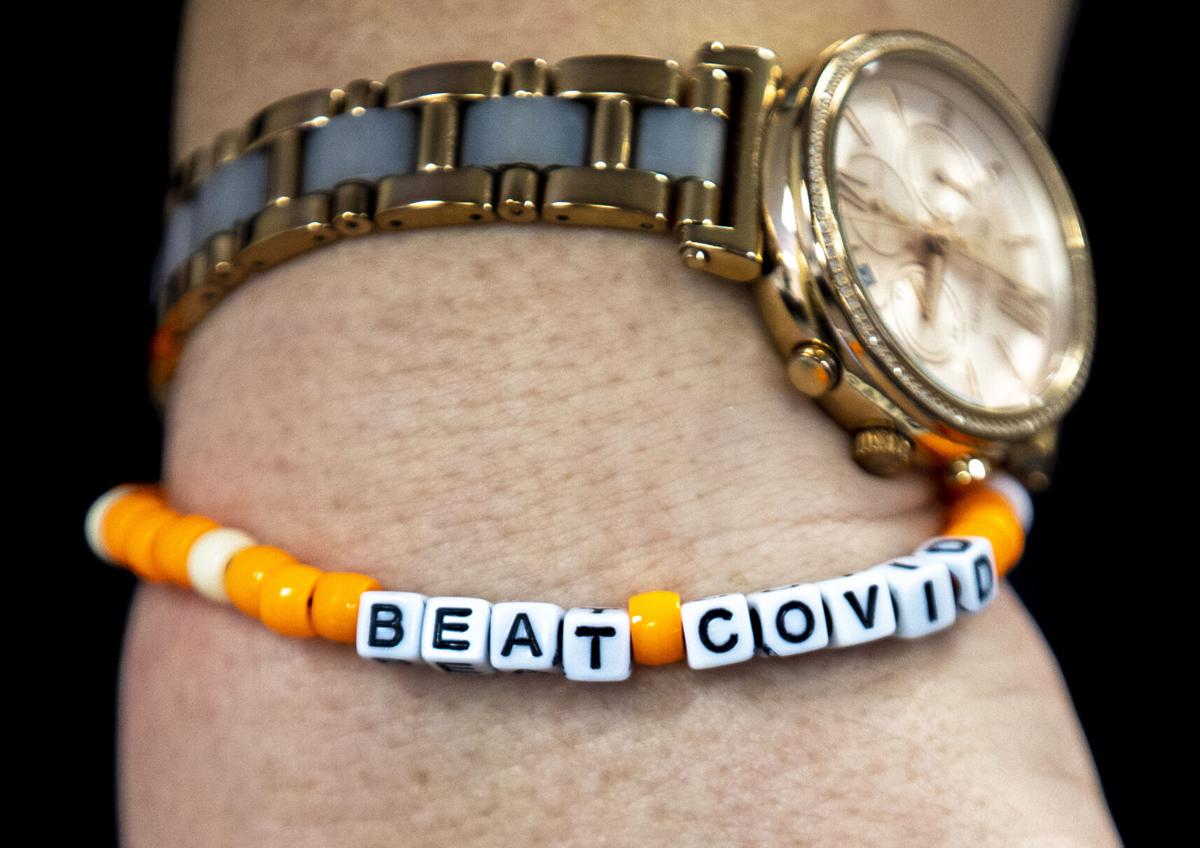 A "Beat COVID" bracelet is seen on the wrist of Clinical Research Coordinator Deanna Lambert at Clinical Trials of South Carolina on Wednesday, Sept. 2, 2020, in North Charleston. Andrew J. Whitaker/Staff 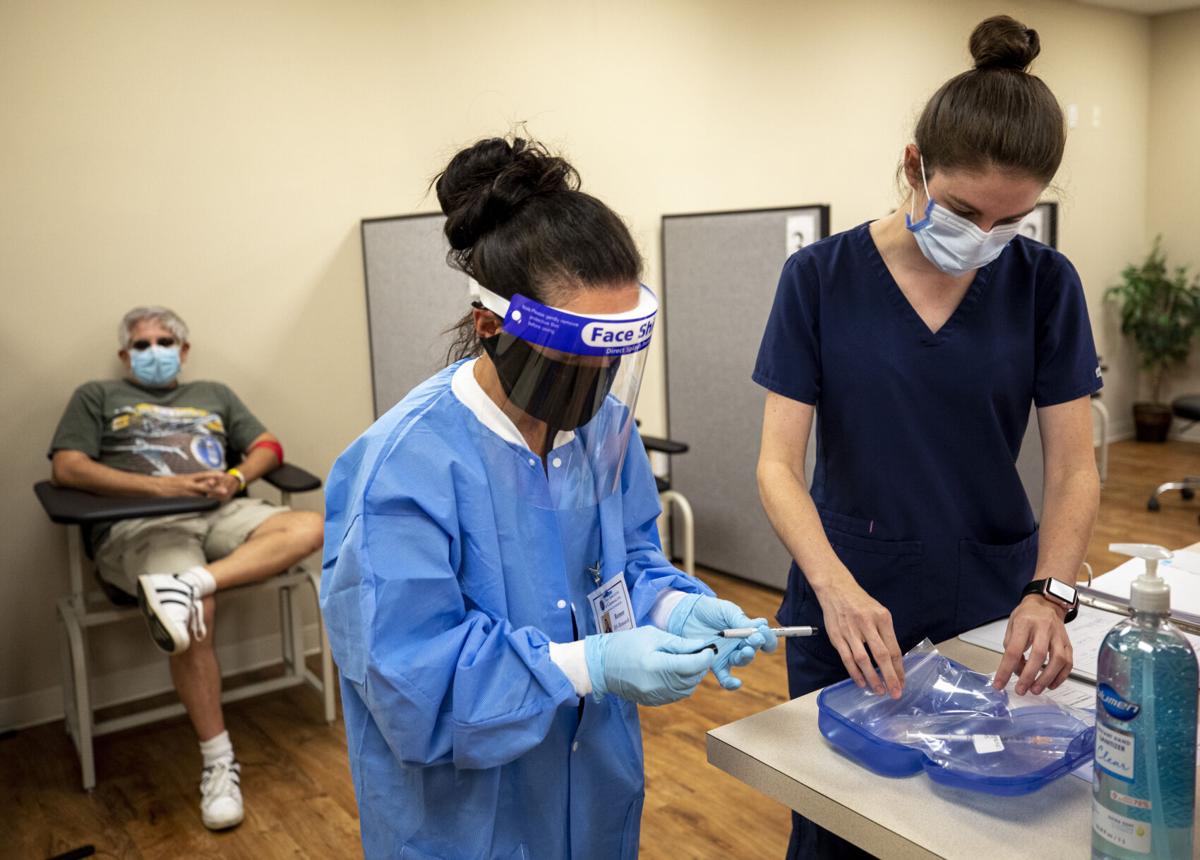 Renee Jumper (left), a registered nurse, passes a dose of medicine to Autumn Shavalier to deliver to her patient at Clinical Trials of South Carolina on Wednesday, Sept. 2, 2020, in North Charleston. Andrew J. Whitaker/Staff

COLUMBIA — While the recently touted successes of COVID-19 vaccine trials mean doses could be available by year's end, those initial shipments will likely be limited to hospital employees working to save the lives of patients severely sickened by the disease, state public health officials said Wednesday.

More widespread availability is "many months" away, and the need to socially distance and wear masks to prevent spread will continue even longer, said Dr. Linda Bell, the state's chief epidemiologist.

"Before we can relax these prevention measures and rely entirely on the vaccine," roughly 90 percent of the population needs to be immune, which will depend on a host of factors, including manufacturing and people's willingness to get a vaccine, she said. "The faster we can get the population covered, the more quickly we can move to what we’re all looking forward to as normalized activities."

When the first doses will ship and how many will come to South Carolina are among the many unknowns. It's not even clear whether health care workers in nursing homes, where roughly 40 percent of deaths have occurred despite being locked down since March because employees have unwittingly brought it in, will be vaccinated in the first wave.

What is known is that the logistics for this vaccine, like the pandemic itself, are unprecedented.

"It’s a trickier vaccine than we’re used to," Stephen White, immunizations director for the state's public health agency, told his board last week after pharmaceutical giant Pfizer announced a 90-percent success rate in its third-phase trial.

Moderna followed with more good news this week, saying its vaccine is nearly 95 percent effective. Pfizer then gave an update Wednesday to also boast 95 percent success. Many other companies are close behind in vaccine trials.

The Pfizer vaccine requires ultra-cold storage at minus-80-degrees Celsius (minus 112 degrees Fahrenheit) because it degrades quickly at higher temperatures, something many health care providers can't accommodate. It's expected to be shipped in minimum orders of 1,000 doses, requiring regional distribution to quickly reach eligible recipients across the state before they go bad.

Pfizer's vaccine will be shipped in GPS-enabled containers which will track their location and temperature. The shippers themselves, packed with dry ice, can serve as temporary storage for up to 15 days, but the dry ice must be restocked upon arrival and every five days.

The vaccine by Moderna comes frozen and can be kept at minus-20-degrees Celsius, "so it doesn’t have the rigorous and logistical demand," White said Wednesday.

Both can be kept at refrigerator temperatures but not for long. The expiration date in a normal cooler is just five days for Pfizer's and 30 days for Moderna's, he said.

Both also require two doses, several weeks apart, and both must come from the same company.

Recipients will get reminder cards as part of the effort to ensure they complete the two-step process in time to give them the best shot at immunity.

Health care providers must get pre-approval to administer the vaccine, as required by the federal government. So far, 145 of 183 applications have been approved, according to the Department of Health and Environmental Control.

The agency declined to list the sites, saying the numbers are increasing daily.

It also stressed approval doesn't guarantee a provider will receive the vaccine in the initial waves. Where the shipments go will depend on who's eligible and how many doses are available.

DHEC has broadly separated the distribution into three phases, with the first being health care workers, nursing home residents and first responders. But that phase is actually segmented into mini-phases.

The agency is still working on a priority order for those first, limited shipments.

The second phase, expected in the months to come — and certainly after the holidays — is widespread availability to the general population. The third phase is when supply will actually exceed demand, possibly mid to late 2021, when it's down to the people who declined to be vaccinated and those who want another round.

How long someone stays immune is not yet known. It is possible the vaccine may be needed annually, similar to flu shots.

Of the nearly 200,000 South Carolinians who have been diagnosed with COVID-19 since it was first confirmed in the state in March, about 4,000 have died. How many total have had it is unknown, since roughly half of those who get the virus are asymptomatic and can spread it unknowingly.

Those who have recovered likely can't get reinfected for at least three months, according to state and federal officials. New studies suggest immunity, and thereby the vaccines' effectiveness, might last years.

The vaccine will be available at no charge. The federal government is funding the vaccines themselves, and insurance providers are covering any office-visit fees, Bell said.

DHEC will not require anyone to get the vaccine. However, individual companies can require it of their employees as a workplace condition, said Jane Kelly, DHEC's assistant state epidemiologist.

People who get both doses of the vaccine should still wear a mask, agency officials said, noting it's not 100 percent effective.

Even for a vaccine 95 percent effective, for example, one in 20 people won't develop an immunity, and who that unlucky one is won't be known.