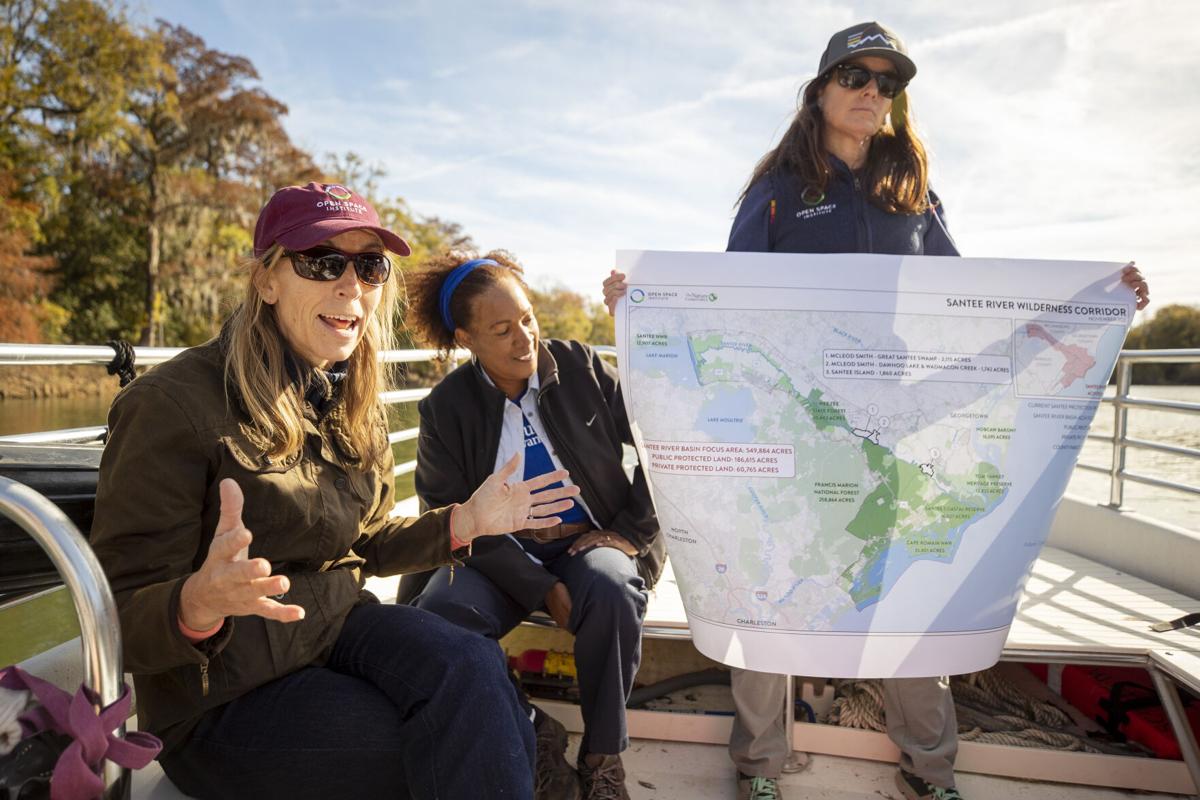 Maria Whitehead with Open Space Institute (left) talks about land they conserved along the Santee River with Dale Threatt-Taylor (center) of The Nature Conservancy and OSI's Michelle Sinkler on Friday, Nov. 19, 2021. Lauren Petracca/Staff 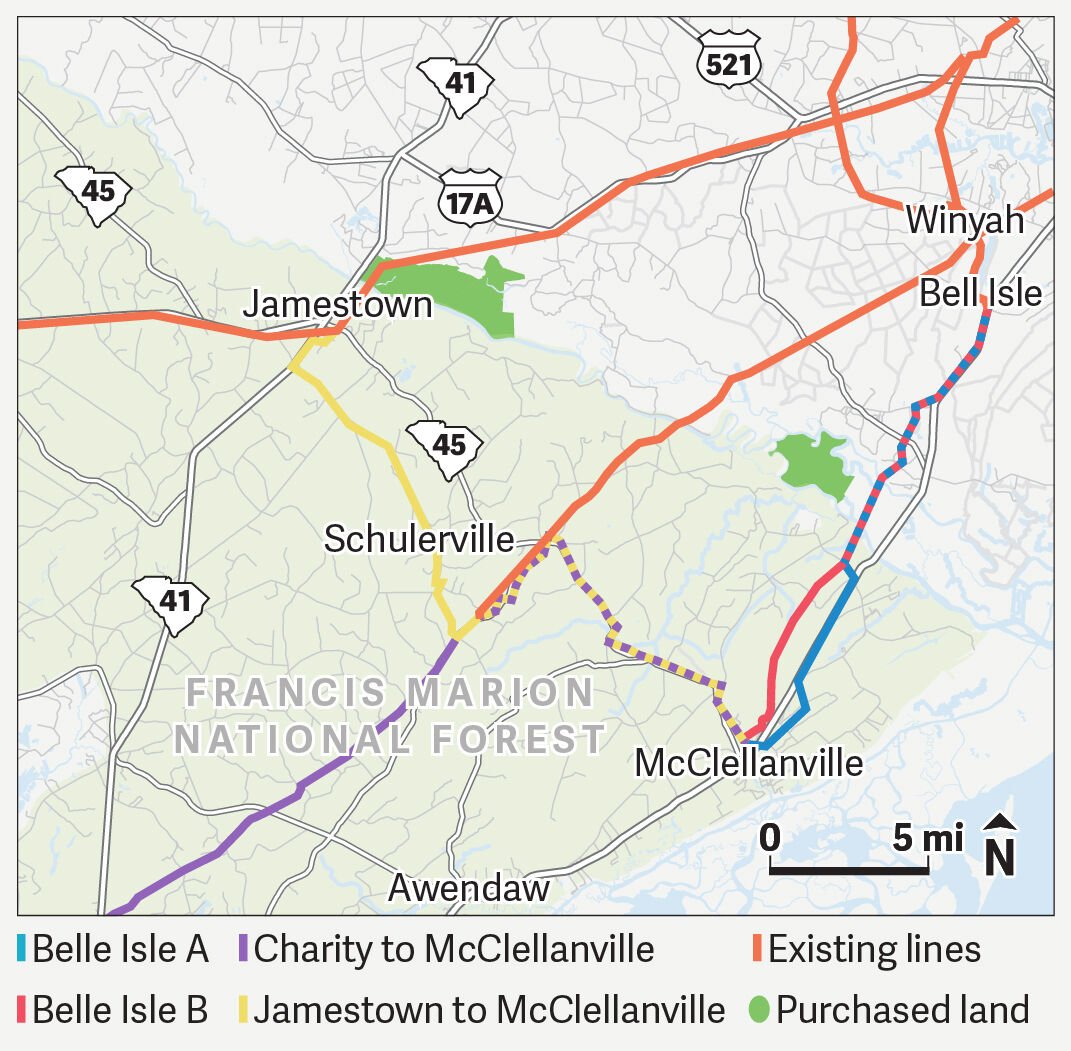 PROTECTION AND POWER: Conservation groups recently bought about 5,800 acres in the heart of the Santee Delta. At the same time, a utility wants to build a power line. Four routes are being studied. (SOURCE: ESRI; THE NATURE CONSERVANCY; USDA) 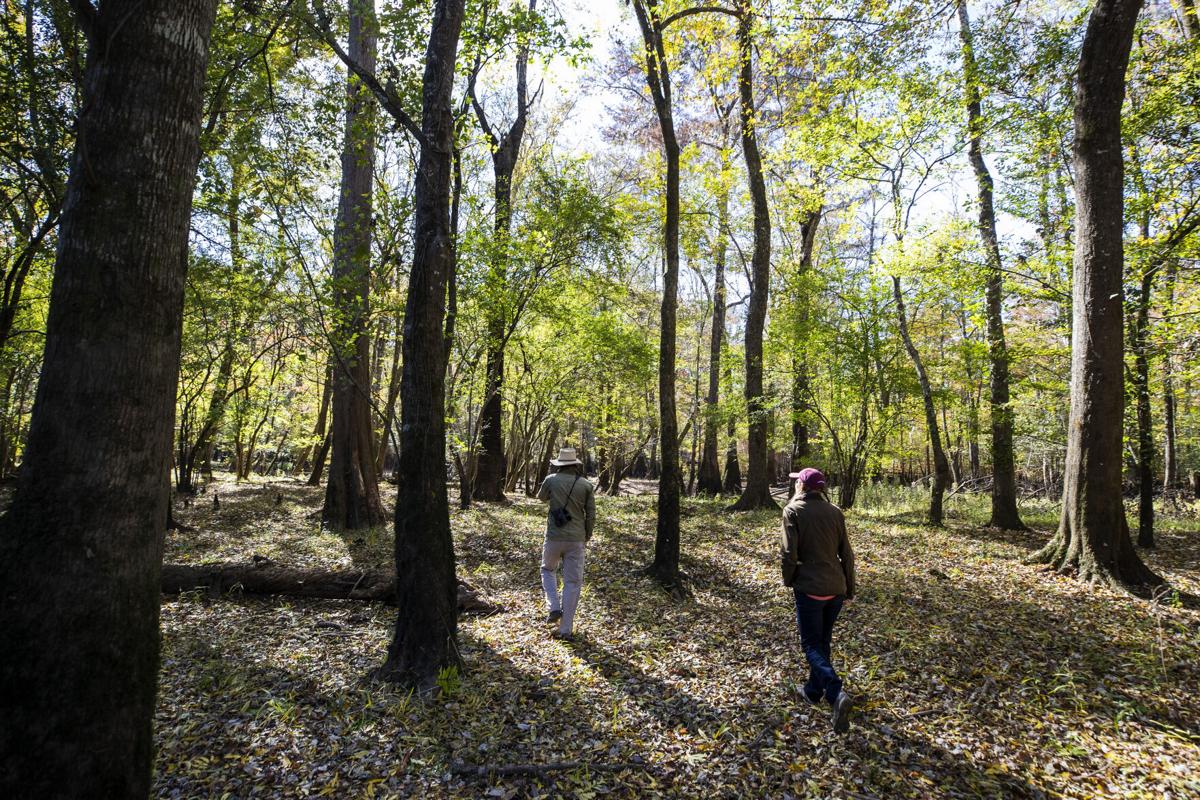 Chris Crolley, with Coastal Expeditions, and Maria Whitehead, with Open Space Institute, explore part of a forest along the Santee River on Nov. 19, 2021. Lauren Petracca/Staff 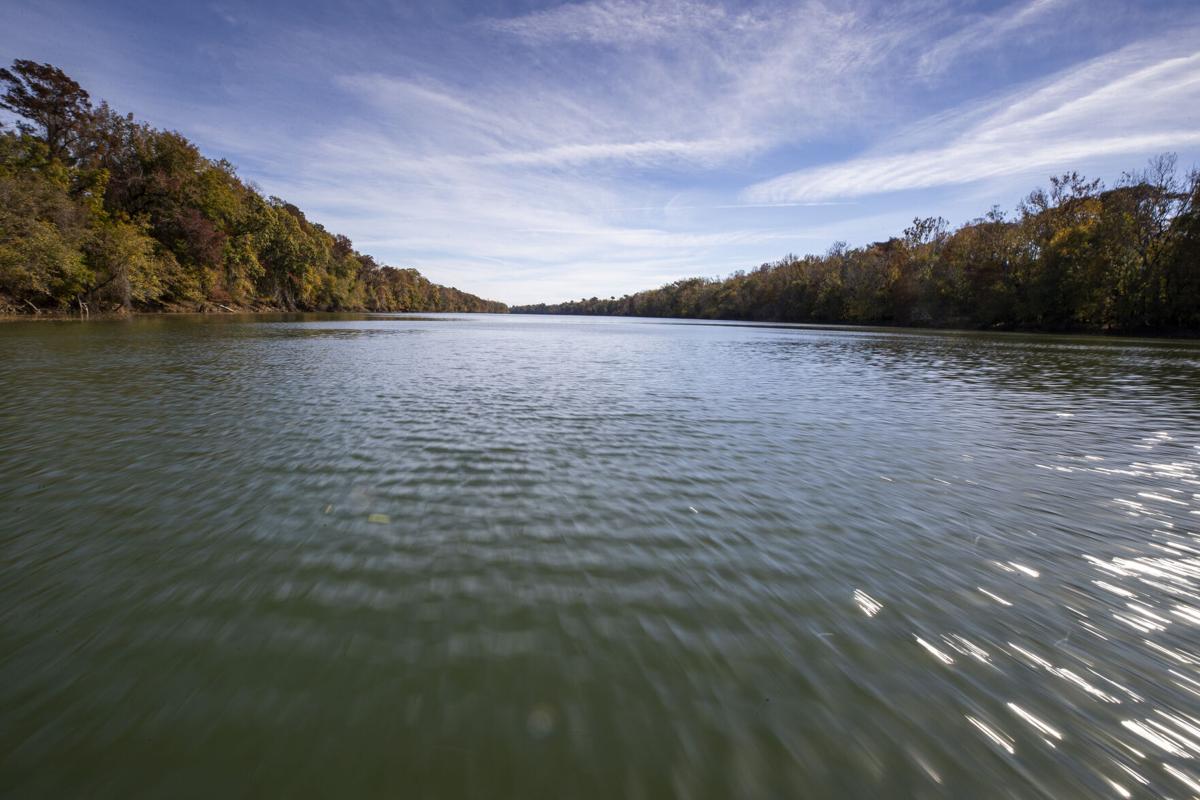 JAMESTOWN — Under the S.C. Highway 41 bridge here, the shallow Santee River slithers toward the sea like one of the cottonmouth snakes that hide along the banks. Float a bit downriver and you'll soon find yourself in a different world.

Towering cypress trees straddle land and water, their knees poking above the languid current. Flocks of blackbirds fly across the water like confetti swept up in gusts. You see no signs of human activity but the white jet contrails overhead.

The river here is a remarkably unbroken spell of nature, despite its proximity to Charleston an hour to the south and Georgetown 20 minutes north. And it’s also the setting for a high-stakes race against time.

A burgeoning population is pressing in on all sides, and conservation groups are trying to protect large land tracts before developers break them into smaller pieces. A utility wants to build a new power line, citing the region’s growing population. At stake is the integrity of one of South Carolina’s underappreciated ecological and historical jewels.

Amid this race, the Open Space Institute and The Nature Conservancy recently paid $7.7 million to buy about 5,800 acres along the river — land equivalent in size to Daniel Island.

The acquisition is an important preservation victory for the Santee Delta amid lingering threats, and on a perfect autumn morning two weeks ago, staffers from these groups were eager to take a look at what they had saved.

They climbed aboard a boat and motored into the Santee. It was high tide, but you could still see the sandy river bottom a few feet below. Fish flashed below in water with a copper tint. Along the banks, needles on the cypress trees had turned a deep auburn.

As the boat moved deeper into the river, Dale Threatt-Taylor grew more excited.

She’s executive director of The Nature Conservancy in South Carolina. Rapid-fire, she talked about the importance of preserving large, unbroken tracts; how the Santee Delta fortunately is one of the few places on the East Coast where so much land already has been set aside; how saving what’s left will have a ripple effect for generations; how this progress can be ruined by an inappropriate development.

“You may have a great piece of pie,” she said. “But if a fly lands in it, it’s ruined, and you might want to throw it out.”

That’s why she and her partners at the Open Space Institute were so happy about what happened this year.

In February, Katy McWilliams of The Nature Conservancy heard that a large landowner on the river was open to preserving two parcels. The land had about 12 miles of unspoiled riverfront. Typically, it takes years to protect such large and prized plots. But things fell together with surprising speed. They finalized the purchase Nov. 23.

Editorial: To protect the Santee Delta's future, it's time to question the power (line)

The groups paid $7.7 million for the properties. But they hope soon to sell them to the state, which could then craft plans to give the public access to the land. Likely uses include hiking, boating and fishing. If all goes well, that public access could happen in a year.

“Getting folks out in nature is the only way to save the places we love,” Threatt-Taylor said.

The purchase adds to an already impressive 248,000 acres of protected land in the Santee River watershed, a natural expanse on the Southeast coast “rivaled only by the Everglades in Florida,” said Maria Whitehead of the Open Space Institute.

As you move deeper into the Santee, it has the feel of a lost world, with its abundant bird life and thick stands of cordgrass hiding alligator nests. More than 100 threatened and endangered plant and animal species live here.

Forests and swamps also hide remnants from another time, when enslaved people created a vast network of dikes and ponds to grow rice. They lived in settlements a few feet above the water, toiling in ankle-deep mud and blazing heat, or as a British observer wrote in 1775, "a furnace of stinking, putrid effluvia."

Many of these settlements have yet to be studied and are vanishing amid the eroding flow of time and rising seas, their scattered bricks evidence of a period that generated enormous wealth and suffering.

But developers are building on the Santee Delta’s fringes. This makes the delta at once one of the least trodden and most vulnerable places in the Southeast.

Which explains why conservationists and some residents worry about a new power line — a potential fly that could land in the delta's pie.

About 2,000 people are scattered across the Santee watershed, including about 600 people in and around the town of McClellanville.

McClellanville is a few miles south of the Santee River, surrounded by the Francis Marion National Forest and Cape Romain National Wildlife Refuge. A single high-voltage power line serves the area, and in a recent five-year span, the area had 40 outages.

Because of this reliability issue, Central Electric Power Cooperative wants to build a new power line, a project that power company officials say could cost upward of $30 million to $40 million. To do this, Central Electric would borrow money from the U.S. Department of Agriculture, the agency coordinating studies about the project’s impacts.

But a vocal coalition of McClellanville residents and conservation groups have argued for a decade that the power line isn’t needed. They say it would trample the area’s beauty and history. They want the utility to look harder at less-intrusive options.

The Santee Delta is “sacred ground,” Randal McClure, director of McClellanville’s Village Museum, recently wrote the agency. “Culturally and historically, the Delta is a national treasure. Let’s not spoil it with towers and lines when it’s simply not necessary.”

The USDA’s review focuses on four possible routes. Two cross the Santee River near the land recently protected by the Open Space Institute and Nature Conservancy. A third follows Halfway Creek Road, an environmentally sensitive area in Francis Marion National Forest. And a fourth runs from Jamestown to McClellanville along S.C. Highway 45.

“We prefer to stay out of the Santee Delta,” he said, noting the area’s many historic sites.

But the Jamestown route also has issues, the Southern Environmental Law Center recently told the USDA in a letter.

“Coming down Highway 45 is no picnic," added McClure. “It’s one of the most scenic roads you’ll see in the Lowcountry.”

But on a boat in the middle of the Santee, the threats to the area seemed as distant as the tree-lined horizon.

Chris Crolley, owner of Coastal Expeditions, was at the helm, pointing out the trees along the banks: cypresses, sycamores, sweetgums and oaks. Some of the cypresses along the bank are hundreds of years old, he said.

Behind those trees were ponds thought to be popular once with local fishers. The land had been used for timber.

Carolina Timberland Group, a company based in Columbia, bought the land from another timber company in 2019 as part of a 25,000-acre purchase for investment purposes, said William McKenzie, the group’s managing partner.

The deal with the two conservation groups was a double win, he said. The group was able to recoup its investment and ensure the Santee River stretch would be preserved for future generations.

“There is nothing I hate worse than selling a big tract to somebody and then they turn around and subdivide it,” he said.

Carolina Timberland had previously sold a 550-acre tract along the Black River in Andrews to The Nature Conservancy, so it was familiar working with the group, McKenzie said.

Crolley ducked the boat into a tributary, and the forest closed in even more.

Auburn cypress needles and autumn leaves floated on the slow-moving current. An anhinga, a water bird with a snakelike neck, took flight. The boat got stuck on a fallen limb, but Crolley quickly moved it off.

Threatt-Taylor of The Nature Conservancy looked around at the land she and her partners had protected. “You can’t come out here and not love it, not just say, ‘Wow.' ”