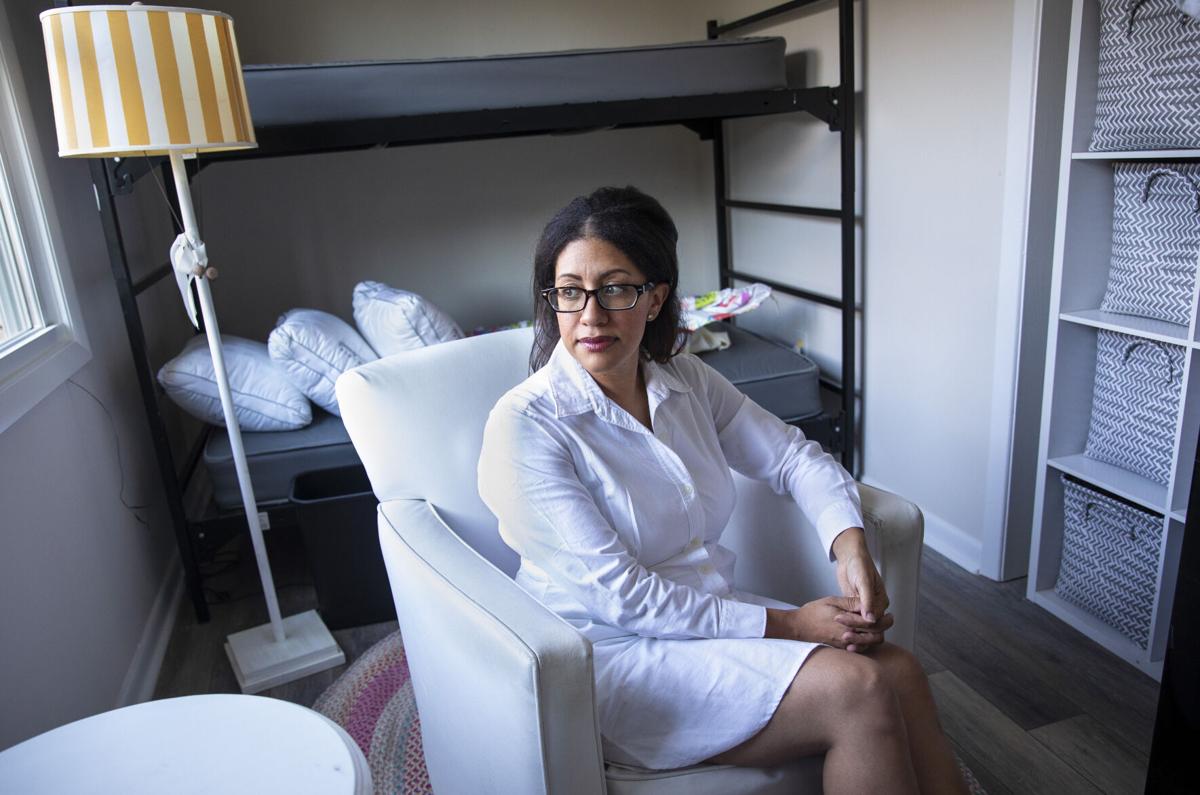 Congress plans to cut funds for the Victims of Crime Act grants by 40 percent, which would cost My Sister's House over $175,000 in grants. Tosha Connors, CEO of My Sister's House, said she is scared to see what will come of this, especially on top of a pandemic. Andrew J. Whitaker/Staff 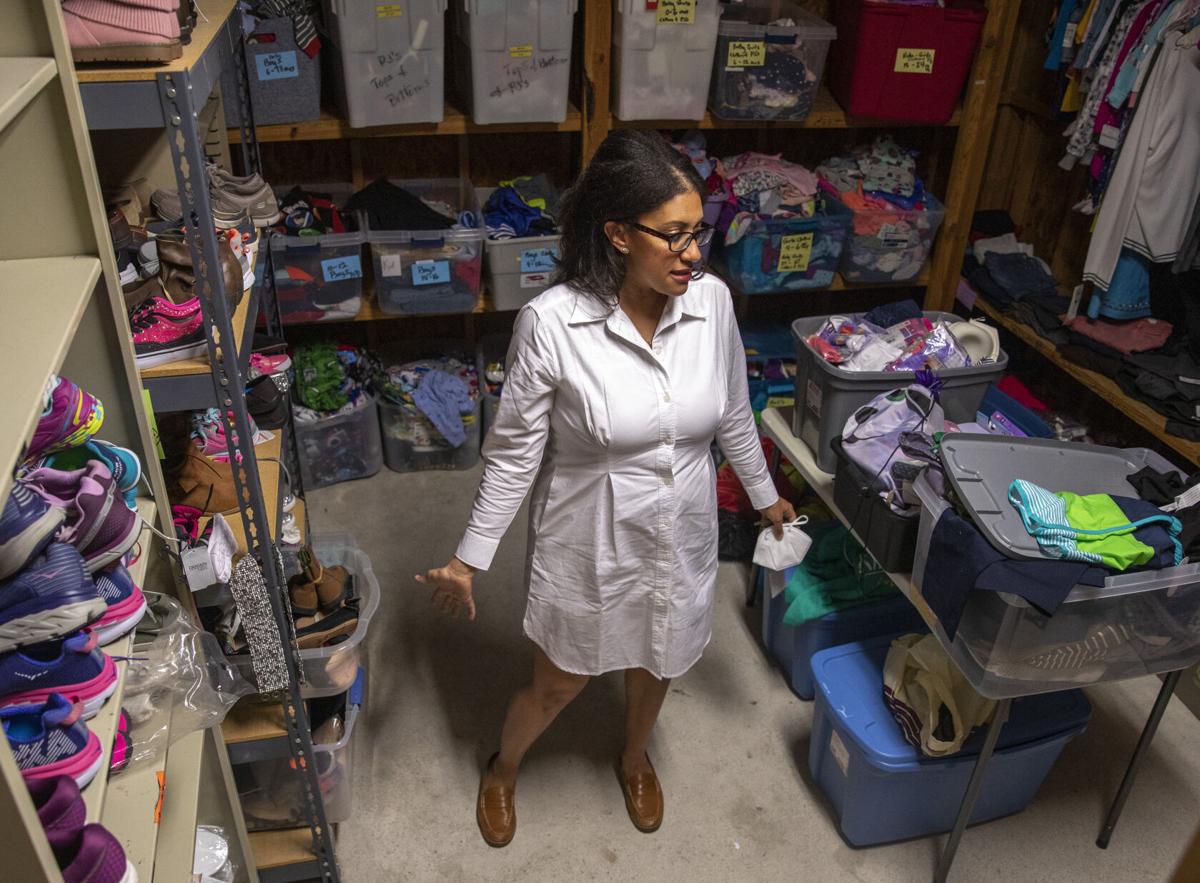 Tosha Connors shows off a donations room at the My Sister's House shelter on Wednesday, Nov. 25, 2020. She said, "People will ask, 'What do you need?' I say, 'Whatever you have at home, multiply by 10.'" Andrew J. Whitaker/Staff 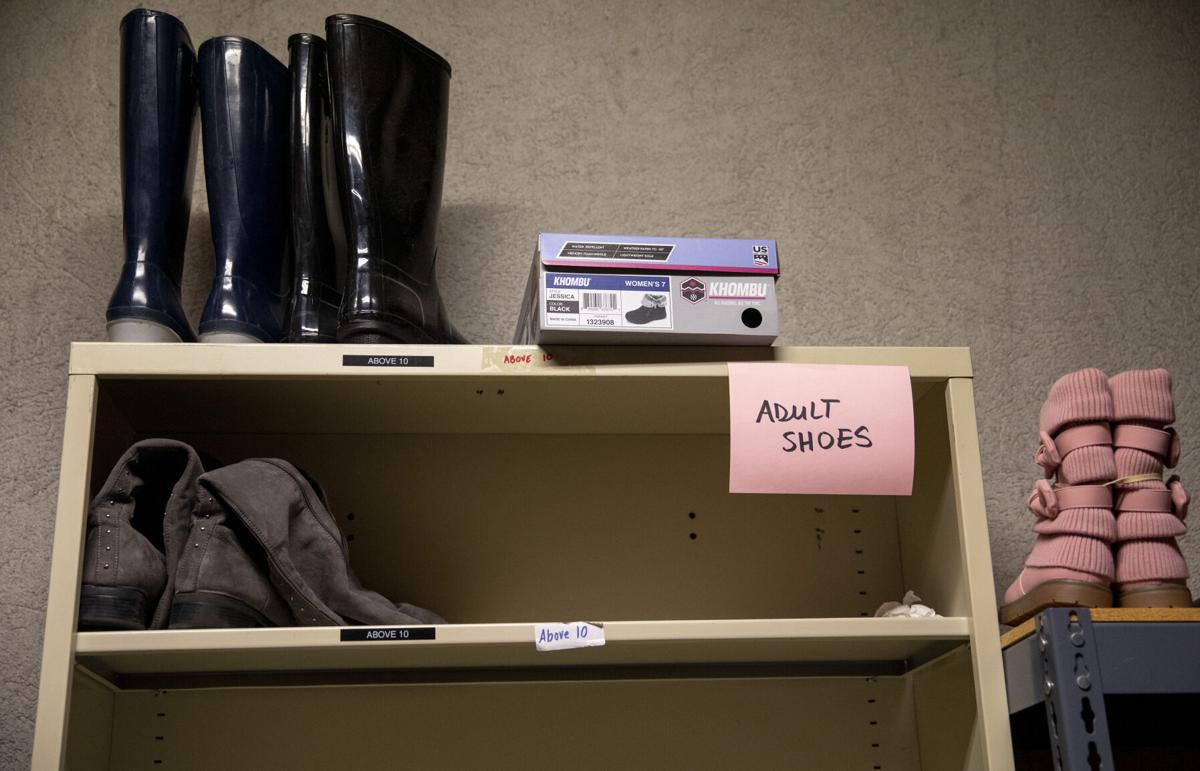 Boots inside the donations room at the My Sister's House shelter on Wednesday, Nov. 25, 2020. Andrew J. Whitaker/Staff 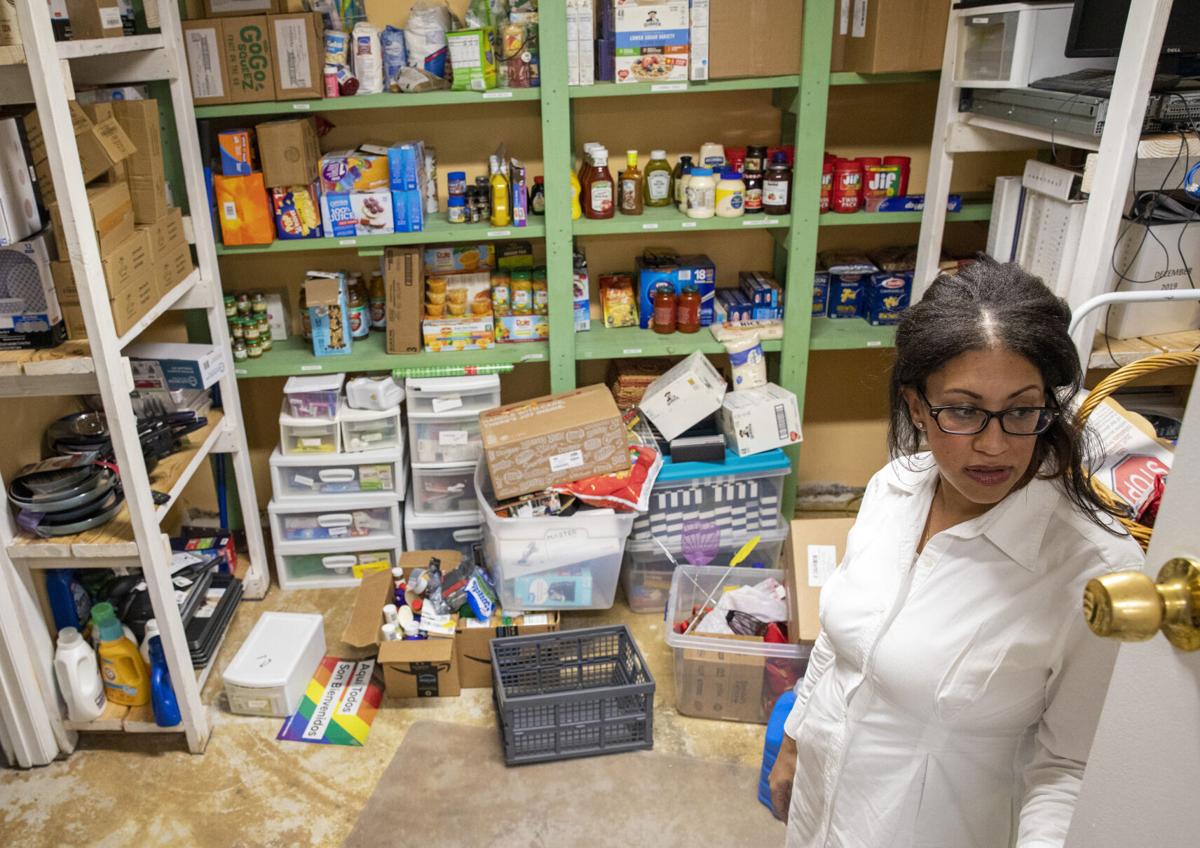 Tosha Connors, CEO of My Sister's House, in the pantry of donated food at their shelter on Wednesday, Nov. 25, 2020. Andrew J. Whitaker/Staff 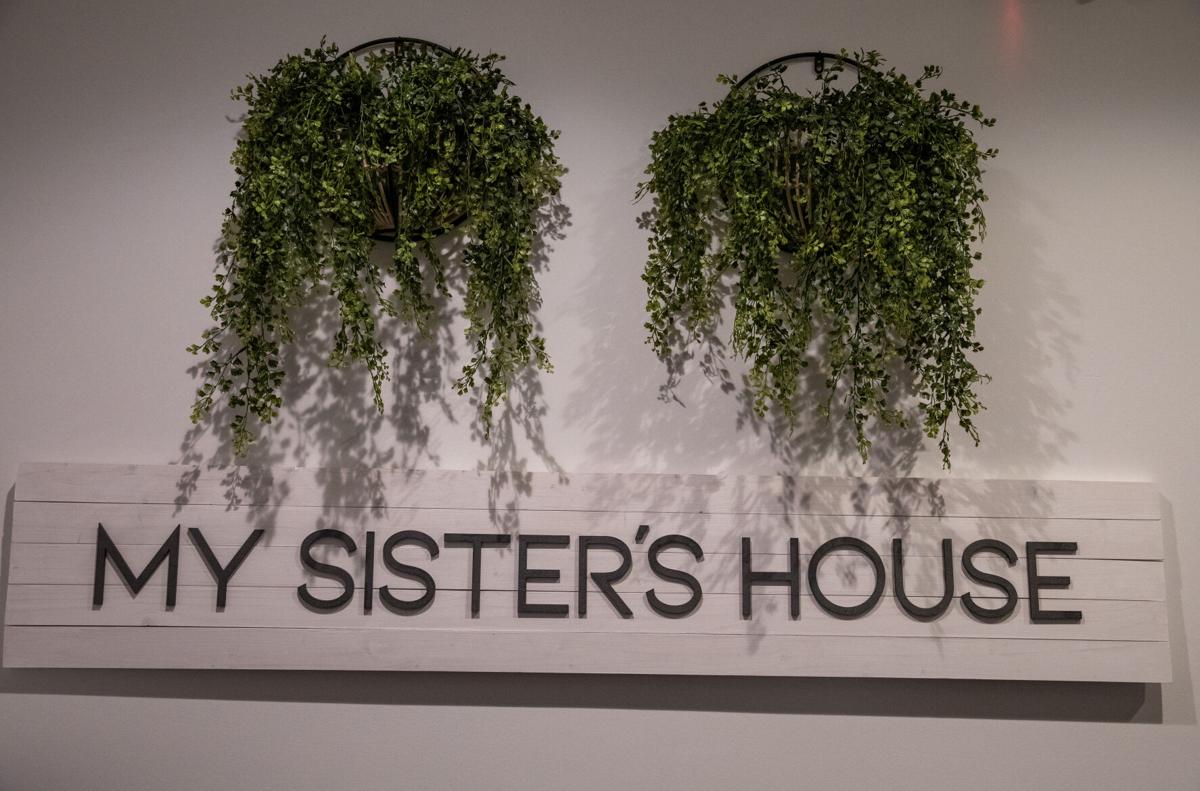 Congress plans to cut funds for the Victims of Crime Act grants by 40 percent, which would cost My Sister's House over $175,000 in grants. Andrew J. Whitaker/Staff 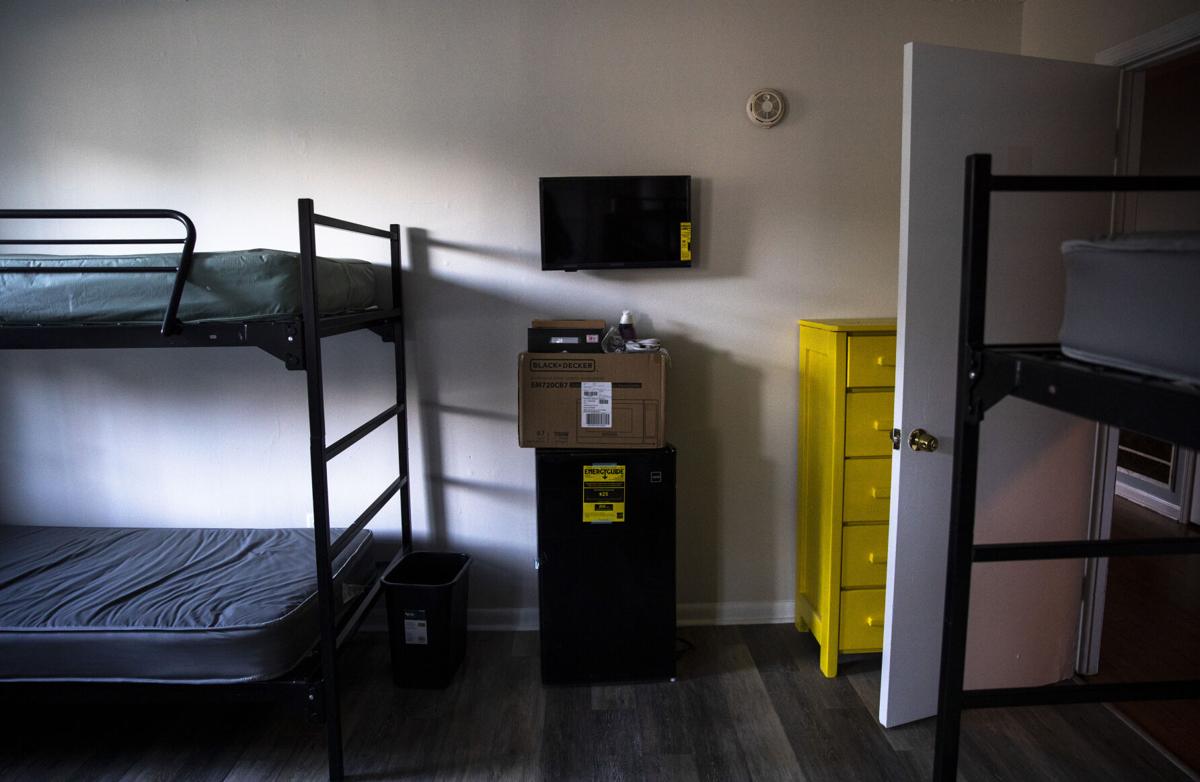 A family room inside the shelter of My Sister's House on Wednesday, Nov. 25, 2020. Andrew J. Whitaker/Staff

Congress plans to cut funds for the Victims of Crime Act grants by 40 percent, which would cost My Sister's House over $175,000 in grants. Tosha Connors, CEO of My Sister's House, said she is scared to see what will come of this, especially on top of a pandemic. Andrew J. Whitaker/Staff

A family room inside the shelter of My Sister's House on Wednesday, Nov. 25, 2020. Andrew J. Whitaker/Staff

Advocates for violence survivors spent Thanksgiving week scrambling to figure out how they’ll salvage programs if Congress moves forward with a plan to reduce funding by 40 percent.

My Sister's House, an advocacy group and shelter provider, says that plan could force them to drop the services they’ve been building up for years, reducing the tri-county area’s foremost domestic violence center to a barely staffed shelter that wouldn’t be equipped to help survivors heal.

"I don't even know if we'd have a program," said CEO Tosha Connors. "Covid has increased domestic violence, and we have a uniquely nasty history in our state. ... Clients and victims can't wait, they need us to step up."

The news came weeks after another funding cut took effect — that one by 18 percent — costing My Sister’s House about $100,000, according to Connors. Lawmakers will vote on the latest reduction Dec. 11.

Losing another $176,000 would decimate the community services that My Sister’s House has built up over the past couple years in a strategic plan targeted at offering counseling and legal advocacy for survivors who aren’t staying in the shelter.

“The whole clinical team would be wiped out, which would be devastating,” Connors said. “We’d still have a shelter because we own the building, but we’d have nobody to work in the shelter. We’d have no program there.”

Those programs have been key as advocates work to reverse the state’s high rate of women killed by abusive male partners, said Sara Barber, executive director of the S.C. Coalition Against Domestic Violence and Sexual Assault.

“Healing can take a long time, and people want quick, easy fixes, but there’s no quick or easy solution,” Barber said. “We need to provide services that give survivors support in whatever format they need it.”

For decades, advocates have been shifting their focus to community services, like financial, legal and health assistance, in addition to the traditional protections offered by the emergency shelter. It’s a more nuanced approach to a complex situation, Barber said, allowing survivors to take advantage of the help they need for long-term healing.

But to build up effective programs, advocates need funding — and the knowledge that they can rely on more support in the future, so that service will be consistent.

For years, that’s been a problem.

The 1984 Victims of Crime Act created a fund for grants that clinics, law enforcement offices, shelters and advocates can use to provide services. They’re the main source of federal funding for thousands of victim service organizations across the country.

Instead of using taxes, the fund draws from the fines that federal defendants pay when convicted of a crime. But when cases end in plea deals and dropped charges, the money goes straight to the general treasury.

As fewer cases have gone to trial and some fines have dropped over the past decade, experts estimate that the fund will hit a 10-year low by the end of 2021.

In an August letter, each state’s attorney general asked Congress to funnel all monetary penalties from federal court to the fund, even if cases don’t go to trial.

That would add about $8 billion to the fund each year and allow the federal government to reimburse states for 75 percent of their victim assistance costs, instead of the current 60 percent. The letter argues that states should be allowed to use the grants over a five-year period rather than the current four years, so they can craft more reliable strategic plans.

A slew of victims services organizations also petitioned Congress, asking lawmakers to require that state administrators temporarily waive the 20 percent match requirement for sub-grantees like My Sister's House, and have state compensation programs waive requirements that victims cooperate with law enforcement to get their restitution money.

In historic first, SC no longer top 10 state for women killed by men