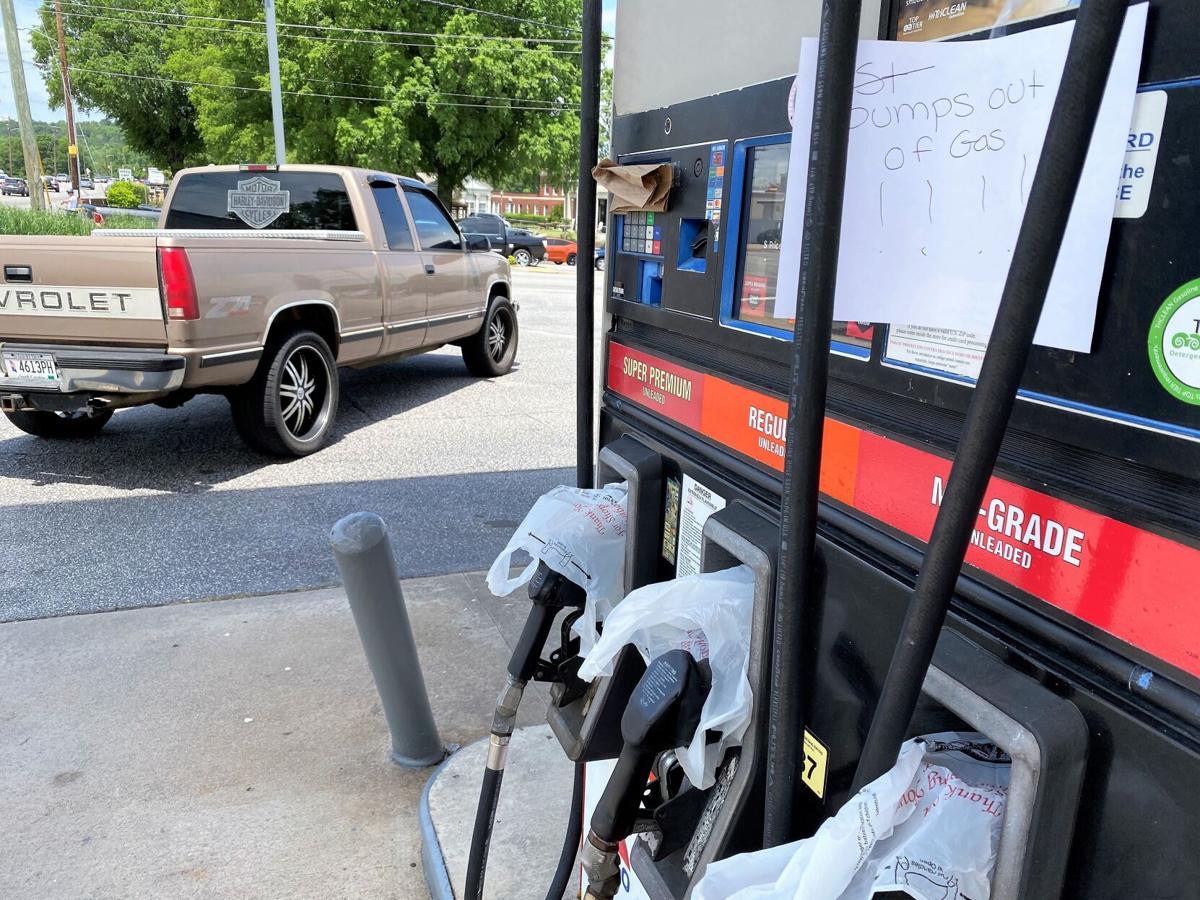 Plastic grocery bags cover pumps at a Citgo gas station at North Pleasantburg Drive and Rutherford Road on Tuesday, May, 11, 2021, in Greenville. A clerk at the station told a report he'd run out of fuel by about 11 a.m. Anna B. Mitchell/Staff 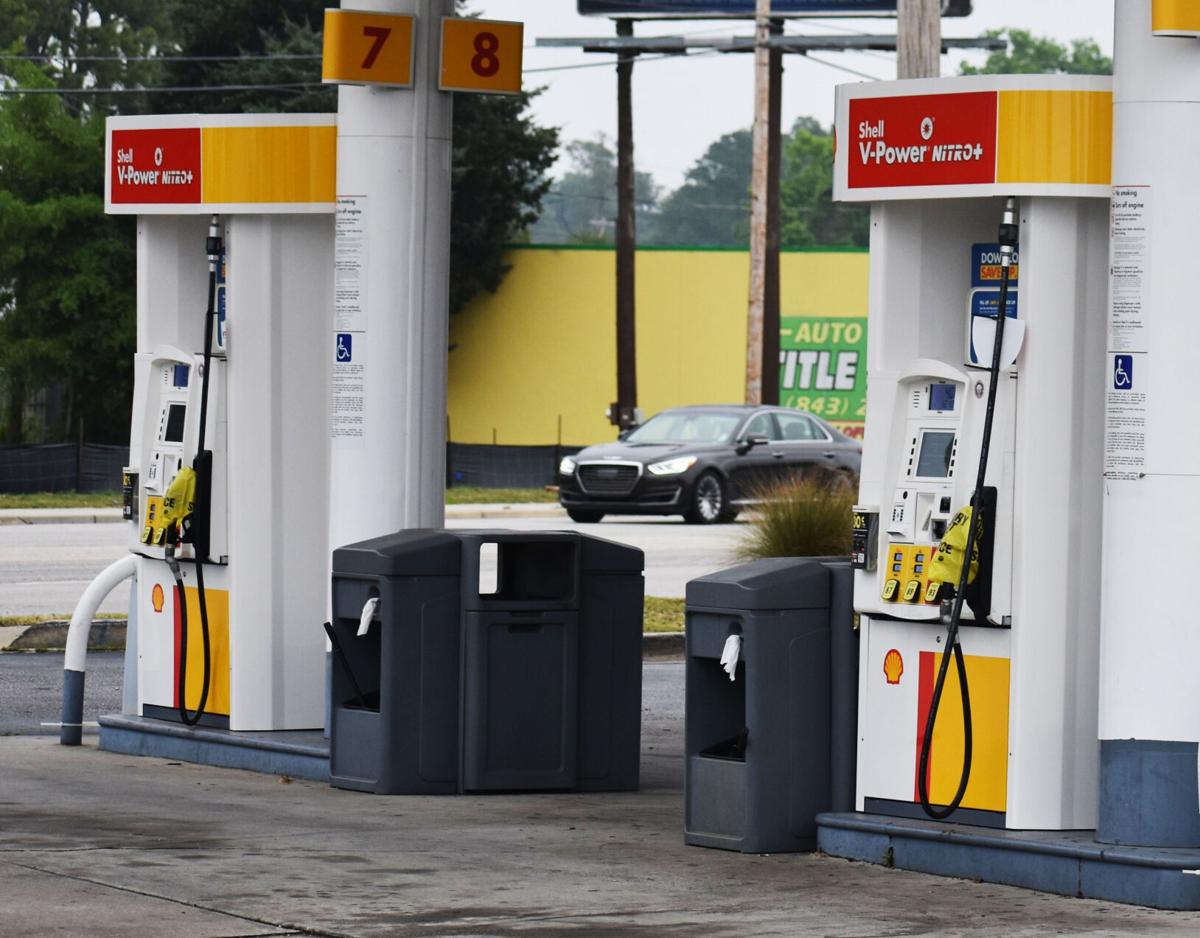 A Shell station at 12th Avenue South in North Myrtle Beach was deserted with plastic bags covering the gas pumps on Tuesday, May 11, 2021. The only traffic was from customers buying snacks or lottery tickets. Richard Caines/Staff 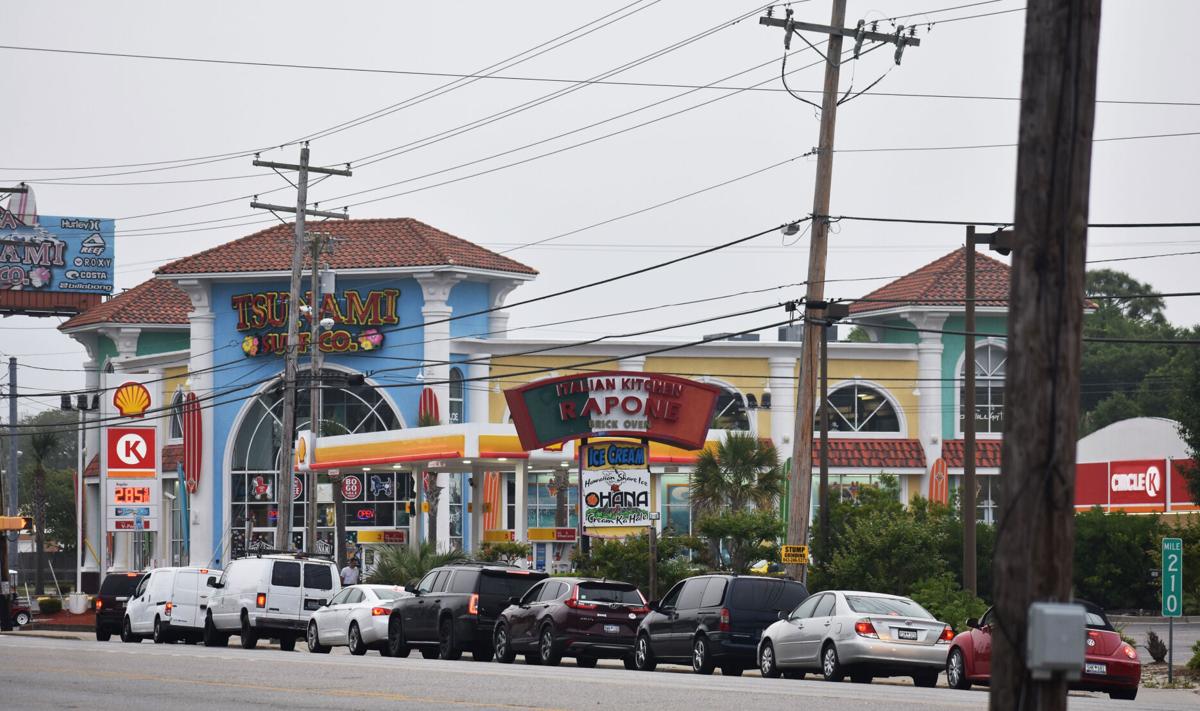 The Circle K at 33rd Avenue South had wait times averaging 10 minutes on May 11, 2021, so cars had one northbound lane of U.S. Highway 17 completely at a standstill. Richard Caines/Staff

Plastic grocery bags cover pumps at a Citgo gas station at North Pleasantburg Drive and Rutherford Road on Tuesday, May, 11, 2021, in Greenville. A clerk at the station told a report he'd run out of fuel by about 11 a.m. Anna B. Mitchell/Staff

A Shell station at 12th Avenue South in North Myrtle Beach was deserted with plastic bags covering the gas pumps on Tuesday, May 11, 2021. The only traffic was from customers buying snacks or lottery tickets. Richard Caines/Staff

The Circle K at 33rd Avenue South had wait times averaging 10 minutes on May 11, 2021, so cars had one northbound lane of U.S. Highway 17 completely at a standstill. Richard Caines/Staff

Gasoline suppliers are warning service station operators in South Carolina that fuel shortages are possible after a cyberattack last week on Colonial Pipeline caused the company to shut down its massive fuel-distribution system.

Some service stations in North Myrtle Beach and Greenville were already turning away motorists seeking to refuel their vehicles on May 11. Motorists piled into stations still selling gas, causing long lines that delayed traffic in some areas.

Gov. Henry McMaster said on Twitter his office has been in constant communication with the Office of Regulatory Staff about the pipeline shutdown. That agency is responsible for managing the state's utility industries, including natural gas.

"There is no need to rush to top off your gas tanks or hoard gas — the pipeline is expected to resume operations by the end of the week," McMaster tweeted.

Colonial Pipeline, which delivers roughly 45 percent of fuel consumed on the East Coast, announced May 7 it was halting all pipeline operations after the company was victimized by a ransomware attack.

On May 10, the company said it was working toward "substantially restoring operational service" by the weekend.

Colonial Pipeline did not say what was demanded or who made the demand, but the FBI identified software belonging to the Russian-speaking criminal syndicate DarkSide as being used in the attack. Ransomware attacks are typically carried out by criminal hackers who seize data and demand a large payment in order to release it.

Experts say cyberattack on US pipeline is a wake-up call

The attacks have impacted the price of gas and its availability in South Carolina and along the East Coast.

Almost a half-dozen gas stations along a 3-mile stretch of North Pleasantburg Drive, a five-lane urban highway in the city of Greenville, ran out of fuel by lunchtime on May 11. A clerk at a Sunoco station said he'd run out of regular unleaded gas by 7 a.m. and was out of supreme by noon.

Another clerk, this one at a Citgo station in Greenville, said he'd run out of gas about 11 a.m. Motorists pulling up to the station called out to each other asking for tips on where to get gas.

"I'm down to my last quarter-tank," one man said.

In North Myrtle Beach, vehicles idling outside the Circle K at 33rd Avenue South were backed up onto U.S. Highway 17, snarling traffic.

The Walmart Neighborhood Market at The Market Common in Myrtle Beach had an employee directing traffic as lines for its pumps began to grow.

Service station operators contacted in the Charleston area said they had not yet experienced shortages, but suppliers were warning it was a possibility this week.

Mustafa Abukhdeir, owner of Kelly's Quick Stop in North Charleston, said he doubled his order for fuel three days ago after the station's supplier warned him about the impact the cyberattack would have on local fuel availability.

Even when fuel is available, it's more expensive. The average price of regular unleaded gas in South Carolina has risen about 13 cents in the past week, from $2.61 a gallon a week ago to $2.74 on May 11, according to AAA Carolinas.

Tiffany Wright, director of public affairs for AAA Carolinas, said the spike in prices was a direct result of the pipeline shutdown. The longer it stays offline, the more potential there is for shortages and higher prices, she said.

Rick Todd, president of the South Carolina Trucking Association, said there was a lot of uncertainty in the trucking industry about fuel availability and supply shortages. Extensive fuel shortages combined with pre-existing supply chain challenges could create problems for the trucking industry, he said.

A spokesman for the school district in Greenville County, the state's largest, said its fleet of more than 300 state- and locally-owned buses should make it through the fuel crisis just fine. The district's two underground tanks also have plenty of diesel to get through the week, the spokesman said.

Attorney General Alan Wilson said in a news release May 11 the Colonial Pipeline's shutdown was causing an abnormal disruption in the market. As a result, the state's fuel gouging statute would be put into effect for 15 days, unless notice of the disruption was rescinded sooner.

“I’m urging everyone to be careful and be patient,” Wilson said. “We hope this gas shortage will last just a few days, but we must be wary of individuals looking to unfairly take advantage of the situation through price gouging. According to state law, price gouging constitutes a criminal violation and an unfair trade practice."

Price gouging, or "excessive pricing," is a misdemeanor offense punishable by a $1,000 fine and up to 30 days in jail.

Residents can report price gouging by emailing pricegouging@scag.gov, calling 803-737-3953 or filling out a form on the attorney general office's website at www.scag.gov.

Richard Caines in Myrtle Beach, Adam Benson in Columbia and Anna B. Mitchell in Greenville contributed to this report. Information from the Associated Press also was used.