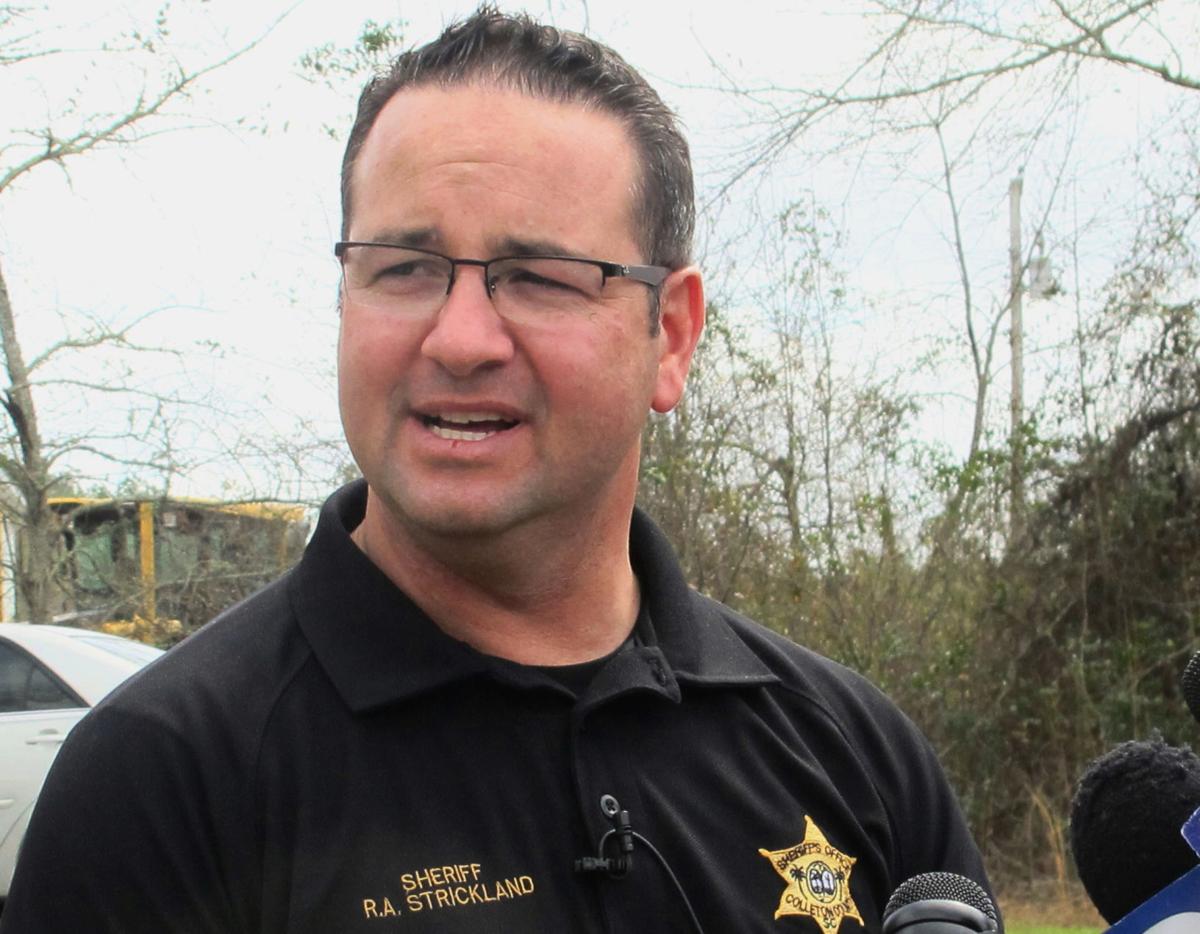 Colleton County Sheriff Andy Strickland talks with members of the media in 2016. File/AP 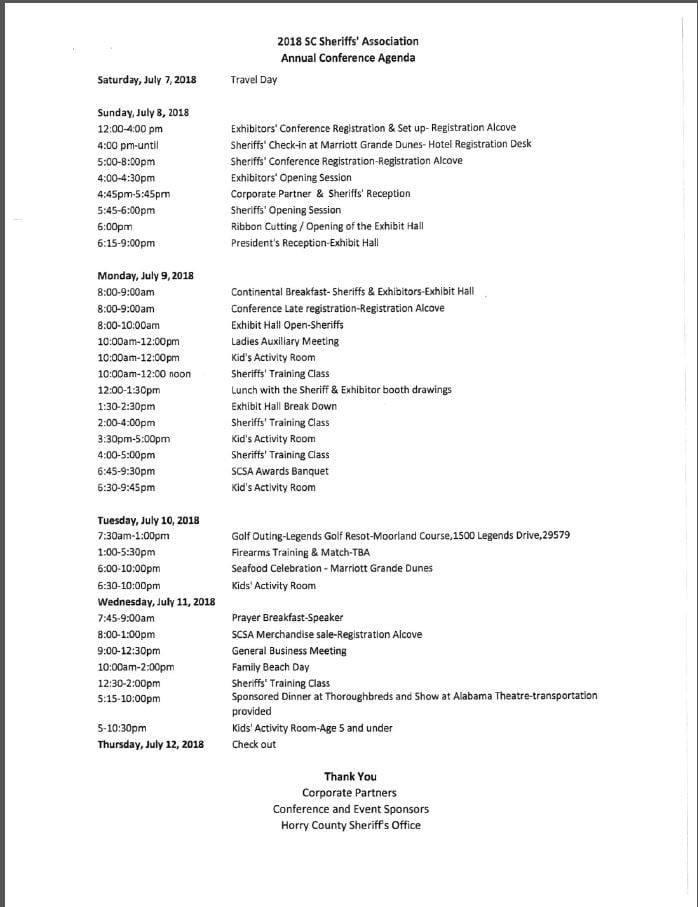 Colleton County Sheriff Andy Strickland used county tax dollars for a $1,500 Myrtle Beach hotel charge this summer for what he said was a separate room for his children during a sheriffs conference.

Strickland's summer spending raises new questions about how South Carolina sheriffs wine and dine themselves and others. The state's ethics law prohibits public officials from using their positions for their own and their family's personal gain.

In interviews and emails Thursday and Friday, Strickland told The Post and Courier, "We don’t get vacations, that’s not what this is. But I included my children, which is clearly on the agenda."

The $1,500 tab was one of four room charges from Marriott Myrtle Beach totaling $5,594.32 in mid-July, during the S.C. Sheriffs’ Association conference.

After the conference, a county procurement manager questioned the expense. Strickland promptly fired off an email to his assistant, ordering her to approve the charge.

Referring the auditor's request for documentation, Strickland wrote: "Asking a question for the right reason is one thing, however over stepping your boundaries, taking advantage of your position and being nosey as hell is another." He concluded with: “As the Sheriff of this county I approved this message along with this expenditure and that’s the end of it.”

The South Carolina Sheriffs' Association holds two main conferences a year, a short one in the winter and four days in Myrtle Beach during the summer.

Sheriffs across the state spend tens of thousands of tax dollars for these conferences, according to records obtained by The Post and Courier. Sheriffs often bring their wives and deputies. And the agenda is heavy on buffets, banquets and golf outings.

In 2018, for instance, the third day of the conference included a five-hour golf outing at the Legends Golf Resort, followed by an afternoon firearms competition and an evening “Seafood Celebration.” An agenda for that conference also shows activities for kids, a “family beach day” and law enforcement training classes.

There were nearly 16 hours allotted for access to a "kid's activity room." The entire four-day agenda from 2018's conference budgeted around 11 hours for training total.

A Post and Courier review of social media accounts revealed an Instagram picture of Strickland, four children and Colleton County Engineer Carla Harvey. The post is tagged with the location for the Myrtle Beach Marriott Resort and the event hashtag for the conference #scsa2019.

“I’m trying to do things appropriately,” Strickland told the newspaper. “This is one time a year where our family is very involved. Every day, they have something for the children and that type of thing, they’re big on family orientation and that type of deal."

Strickland said he has a "personal relationship" with Harvey. "I'm legally separated to the point almost from getting divorced," Strickland said. "I don't hide anything from my other half or vice versa."

Harvey told the newspaper she took personal leave to attend the conference.

John Crangle, a longtime South Carolina government watchdog now with the S.C. Progressive Network, said using tax dollars to cover hotel rooms for a sheriff’s children “doesn’t sound OK. I think we need some statutes about what you can and can’t do as a sheriff.”

According to state ethics laws, it’s illegal for a public employee to “knowingly use his official office, membership, or employment to obtain an economic interest for himself” and family members. State law defines an “economic interest” as a transaction or service worth more than $50.

South Carolina government employees aren’t allowed to charge taxpayers for family members’ travel expenses, according to state regulations. It was unclear late Friday whether Colleton County follows state procurement regulations or has its own.

State law also requires sheriffs to receive at least 20 hours of continuing education credit per year. Conferences are important settings for this education, said Jarrod Bruder, executive director of the S.C. Sheriffs' Association. More than 110 vendors displayed their wares and services at this year’s conference, giving busy sheriffs a chance to better understand the latest law enforcement equipment and tactics.

Bruder said the organization also tries to create a family friendly environment, but “family participation should not be achieved through a greater expense to the county.”

Conferences, local and national, also have been the settings for financial and other misbehavior.

When asked about the allegations and charges against other sheriffs, Strickland said it would be "unprofessional" for him to speculate on accusations against other officials.

A recent Post and Courier investigation "Above The Law" showed widespread corruption and scandal in numerous South Carolina sheriff’s departments. In the past decade, no fewer than 13 of South Carolina’s 46 counties have seen their sheriffs accused of breaking laws — nearly 1 in 4.

The revelation that Strickland used the additional conference hotel room for his children comes after yet another controversial email, one that showed him threatening staff to support his 2020 election campaign.

In the email, Strickland said employees could be fired without cause if they chose not to “remain loyal and support” him.

SC sheriff up for reelection sends threatening message to staff to support him, or else

Strickland told the Post and Courier that he "had a tough week this week" after news of that email broke.

According to state law, it's illegal for “for a person to assault or intimidate a citizen, discharge a citizen from employment or occupation, or eject a citizen from a rented house, land, or other property because of political opinions or the exercise of political rights and privileges guaranteed to every citizen by the Constitution and laws of the United States.”

Strickland replaced George Malone, who decided not to seek a third term in 2012. The former sheriff's time was also marred with scandal, including a physical altercation between his wife and his administrative assistant. The former Sheriff called the Post and Courier offices this week to defend Strickland.

"He made some mistakes but I've also made mistakes," Malone said. "I'm somewhat from the old school."