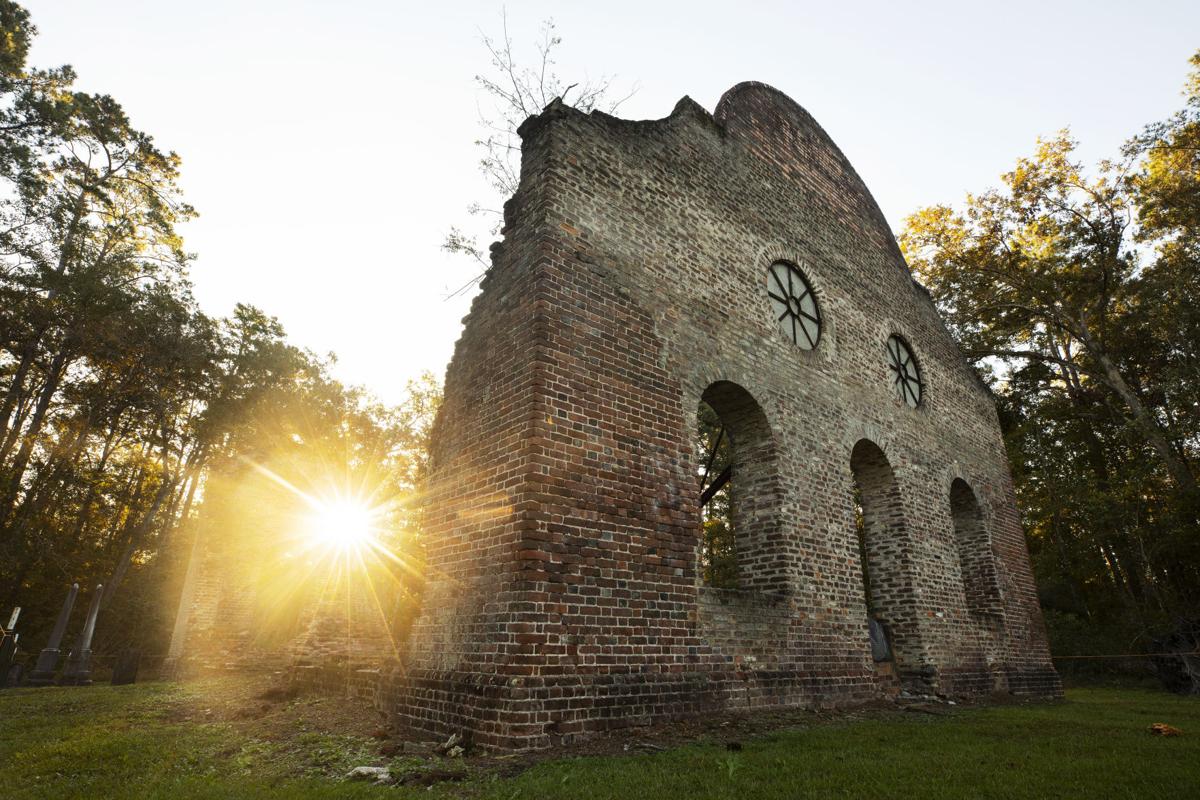 The sun rises over remnants of the Pon Pon Chapel of Ease in Jacksonboro on Wednesday, October 23, 2019. Lauren Petracca/Staff 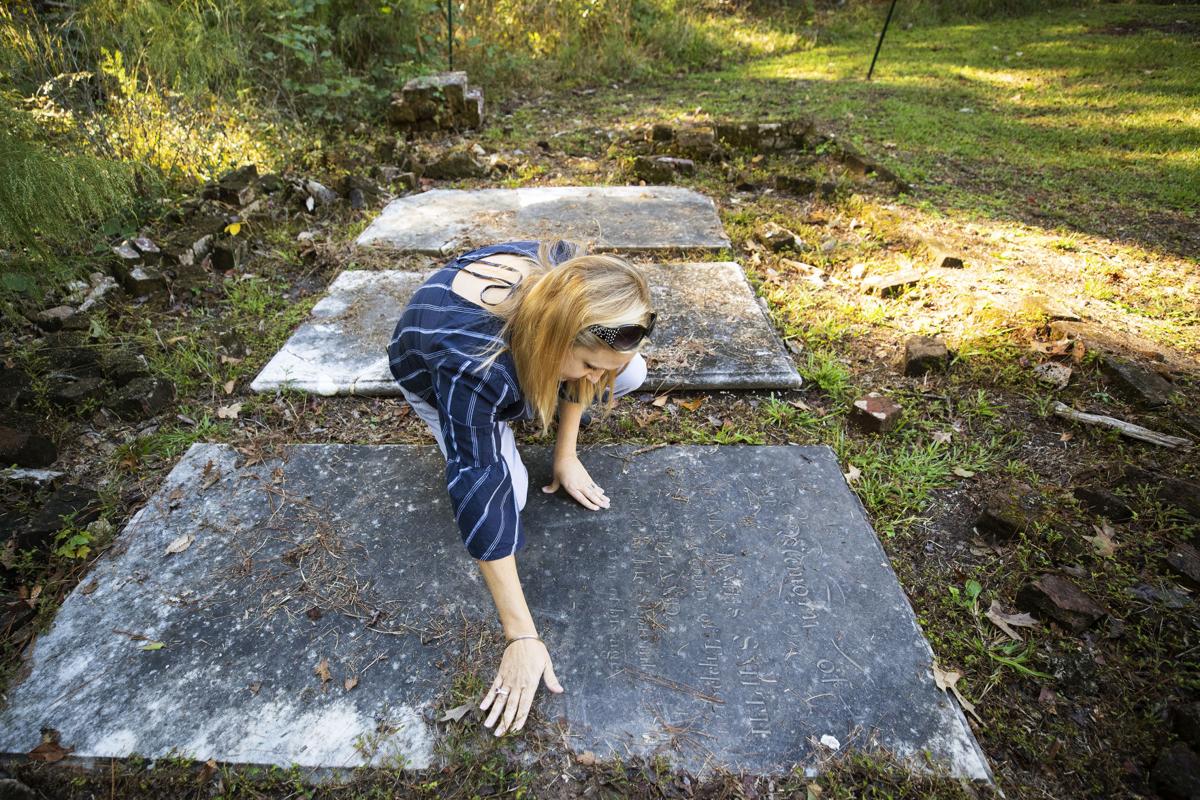 Christie Slocum, vice president of Colleton County Historical and Preservation Society, moves debris off of a gravestone near the Pon Pon Chapel of Ease in Jacksonboro on Wednesday, October 23, 2019. Lauren Petracca/Staff 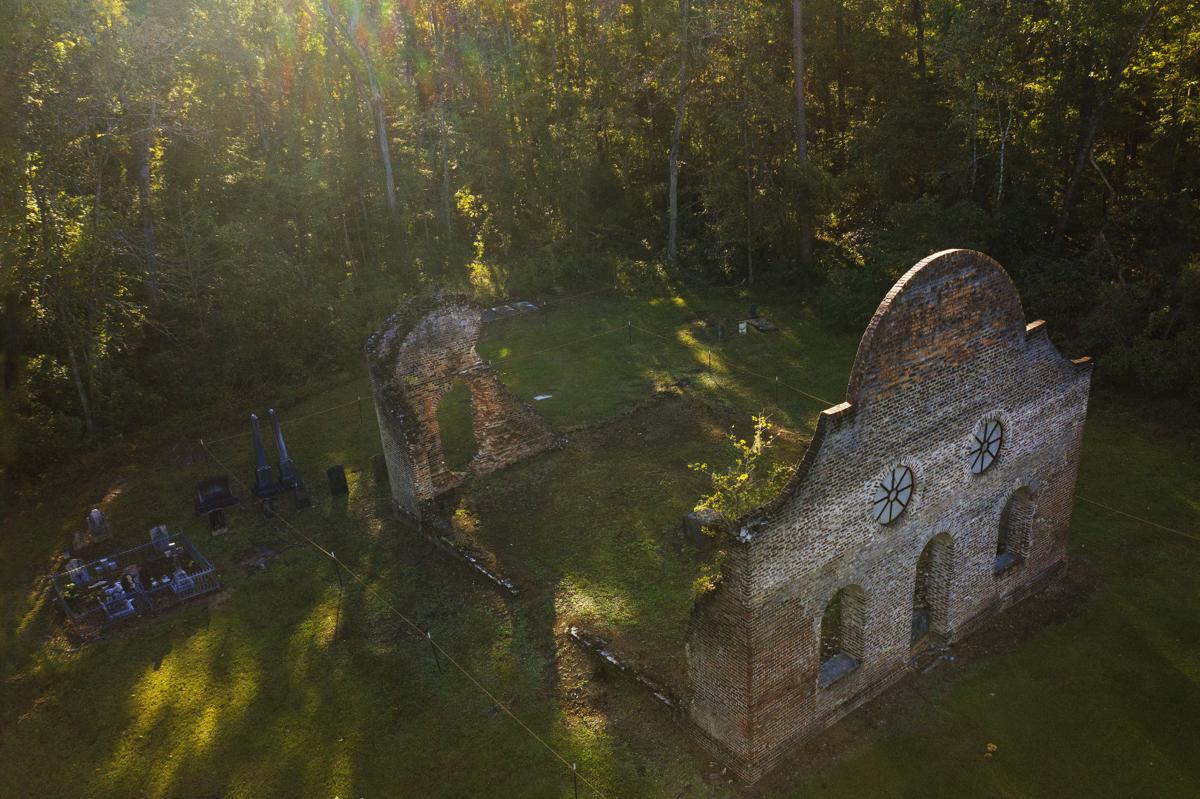 The Pon Pon Chapel of Ease, built in 1820, in Jacksonboro on Wednesday, October 23, 2019. Lauren Petracca/Staff 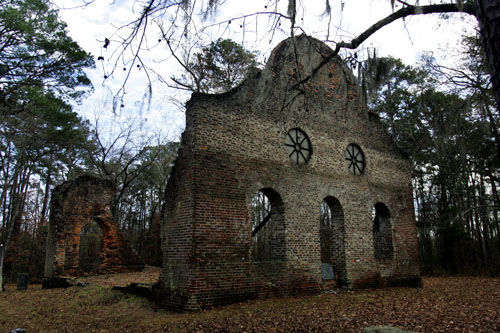 The Pon Pon Chapel of East ruins near Jacksonboro, as they appeared in 2008. File 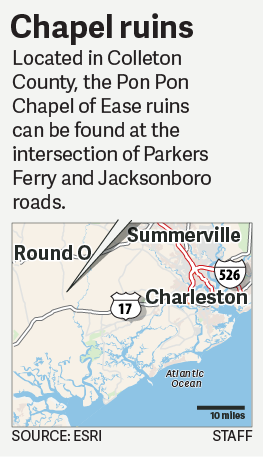 JACKSONBORO — For generations, the ruins of the Pon Pon Chapel of Ease — known locally as "the old Burnt Church" — have stood quietly in the woods not far from the Charleston-Colleton county line.

Its caretakers have hesitated to draw much attention to them, though they are Colleton's most historic, publicly accessible site.

But that's beginning to change.

The chapel's ups and downs were featured in a new documentary, "The Burnt Church: An Exploration of the Pon Pon Chapel of Ease," and a new highway sign directs people to its remote location. Its caretakers, the Colleton County Historical and Preservation Society, are eager to draw more visitors because it feels that will help secure it and raise awareness and money to repair recent damage.

Preserving a remote, sacred ruin in the woods — finding the sweet spot between accessibility, security and preservation — isn't an easy task, as those guarding Old Sheldon Church to the south have learned in recent years.

"Safety is a key point right now because Pon Pon was damaged after Hurricane Matthew," said Sarah Miller, a historian with the society. "Stabilizing the property is the most important thing we need to do."

More than a century of neglect

In the early 1700s, the Jacksonboro community was the heart of what today is Colleton County, an area first known as St. Bartholomew's parish.

Unlike most other South Carolina parishes, St. Bartholomew's never built a namesake church. But in 1725, it did build the Pon Pon Chapel of Ease — its unique name derives from an American Indian word for the lower Edisto River.

The first chapel was built of wood on the present site on Parker’s Ferry Road, which would become a stagecoach route between Charleston and Savannah. On April 24, 1737, the Rev. John Wesley — an Anglican minister who helped found the Methodist Church — preached two sermons there.

In 1754, as the region prospered, the original building was damaged by a hurricane and replaced with a brick one. That burned down in an 1801 forest fire, and many began to call Pon Pon by a new nickname: "Burnt Church."

The chapel was rebuilt around 1820, but it was in use only for about another decade because the surrounding area was changing. Around 1783, Paul and Jacob Walter started a settlement further inland, and Pon Pon's congregation gradually moved to Walterboro and built a new chapel there.

Pon Pon's building gradually suffered from more than a century of neglect. Somehow, it survived an 1879 hurricane that destroyed all five churches in Walterboro. Pon Pon didn't fare as well in 1959, when Hurricane Gracie's winds toppled a large tree into the main facade, destroying all but its corners.

The tree had taken root in the middle of the chapel.

'We want to show it off'

The rediscovery of Pon Pon unfolded slowly. National Society of Colonial Dames took enough interest in the ruin to place a stone marker there in 1944, a marker that since was moved to the ruin's entrance.

It wasn't until 1970 that Pon Pon Chapel and four surrounding acres were deeded to the Colleton County Historical and Preservation Society, which soon worked to get the ruin listed on the National Register of Historic Places. The front façade, damaged by Gracie, was rebuilt by 1976.

In 2006, the 300th anniversary of St. Bartholomew's parish, the General Assembly met at the chapel. The Chicora Foundation surveyed the neighboring cemetery.

In 2014, students from the College of Charleston/Clemson Master’s Degree program in Historical Preservation documented the site and made suggestions for preservation work there. A team from the Savannah River Archaeological Research Program, led by George Wingard, used ground penetrating radar to examine the interior of the ruins.

The students' report recommended removing 11 nearby trees to protect the chapel, and those were scheduled to be cut down the week after Hurricane Matthew arrived in October 2016. Fortunately, the three trees felled by that storm missed the chapel, but soon afterward, a large crack appeared behind the front facade.

The rebuilt facade was stabilized by a few metal supports extending from a large concrete block in the middle of the church. While the 1970 reconstruction used brick on the exterior, as the original looked, the rear was rebuilt with a mixture of concrete block, chicken wire and concrete. Several concrete blocks have sloughed off the rear in a horizontal line just below the curved upper portion.

Christie Slocum, vice president of the Colleton County Historical and Preservation Society, recently visited the ruins and enjoyed the peacefulness.

The site is surrounded by undeveloped, privately-owned lands, and the only visible sign of man are the power lines running across the street.

"People just didn't know it was here, and I feel that's why it's still here," Slocum said.

While its anonymity might have helped preserve it in the past, the society has shifted gears.

Slocum agreed: "We want to show it off."

Because of its fragile state, the society roped off the grounds surrounding the ruin, put up several signs to alert visitors to the danger and began to plan its next steps. Earlier this month, it reviewed a 10-year plan to stabilize the ruins

"Quite frankly, nobody is going to give me a half-million dollars because I have a good plan inside my head," she said.

The society's draft plan also includes other improvements during the upcoming decade, including new interpretive signs, cemetery maintenance, landscaping and a parking area nearby. It's working with a private property owner to create a path linking the ruin to the burial site of Revolutionary War martyr Isaac Haynes, which sits about a half mile away.

Once the ruins are stabilized, the site could be used again for occasional church services, particularly weddings.

Slocum said it likely will have to be deconstructed in part and then rebuilt. The greatest challenge facing the society is how to raise far more money than it's ever tried to raise before.

"People say 'Yes, save it,' but they're not pulling out their checkbooks very quickly," Slocum said. "Every time we have a wind storm, I just hold my breath."

Anyone interested in supporting or seeking more information about the Pon Pon Chapel of Ease may contact info@cchaps.com or call 843-549-9633 or visit www.cchaps.com