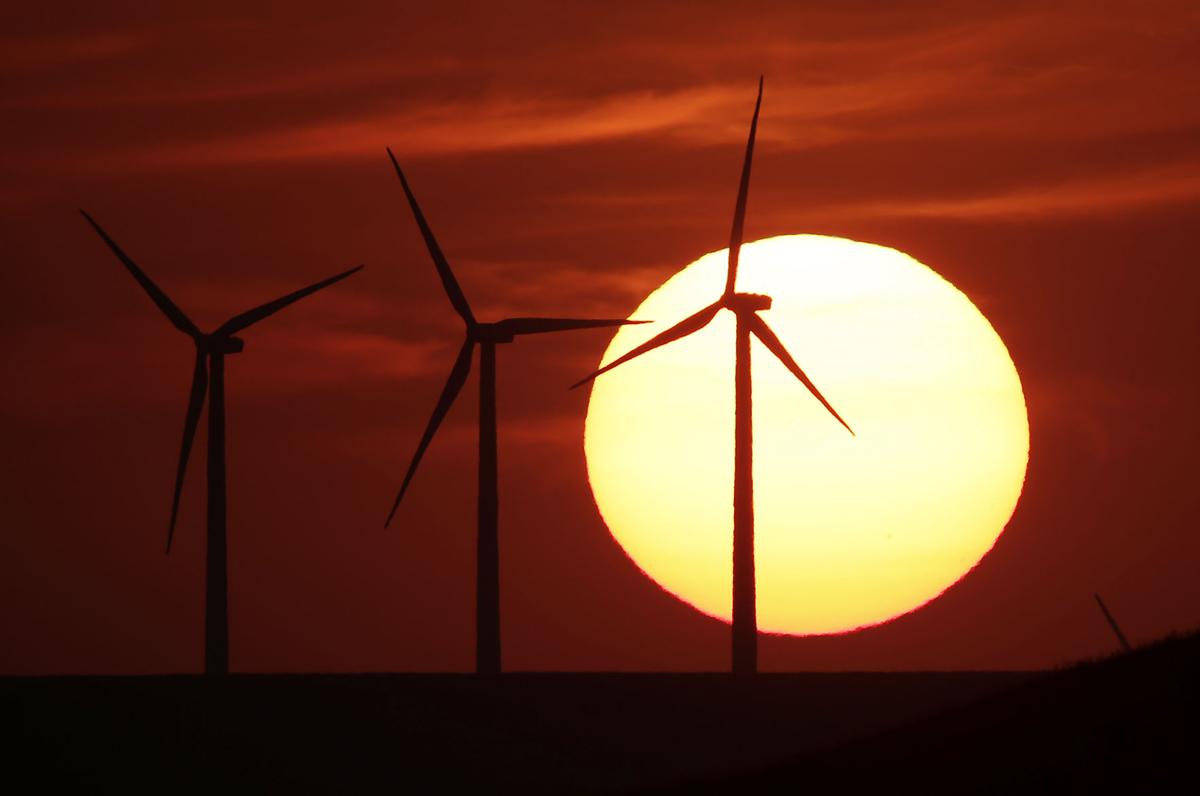 Wind turbines are silhouetted by the setting sun as they produce electricity near Beaumont, Kan. About 6 percent of South Carolina's energy is produced by renewable sources. None of it is wind. File/AP 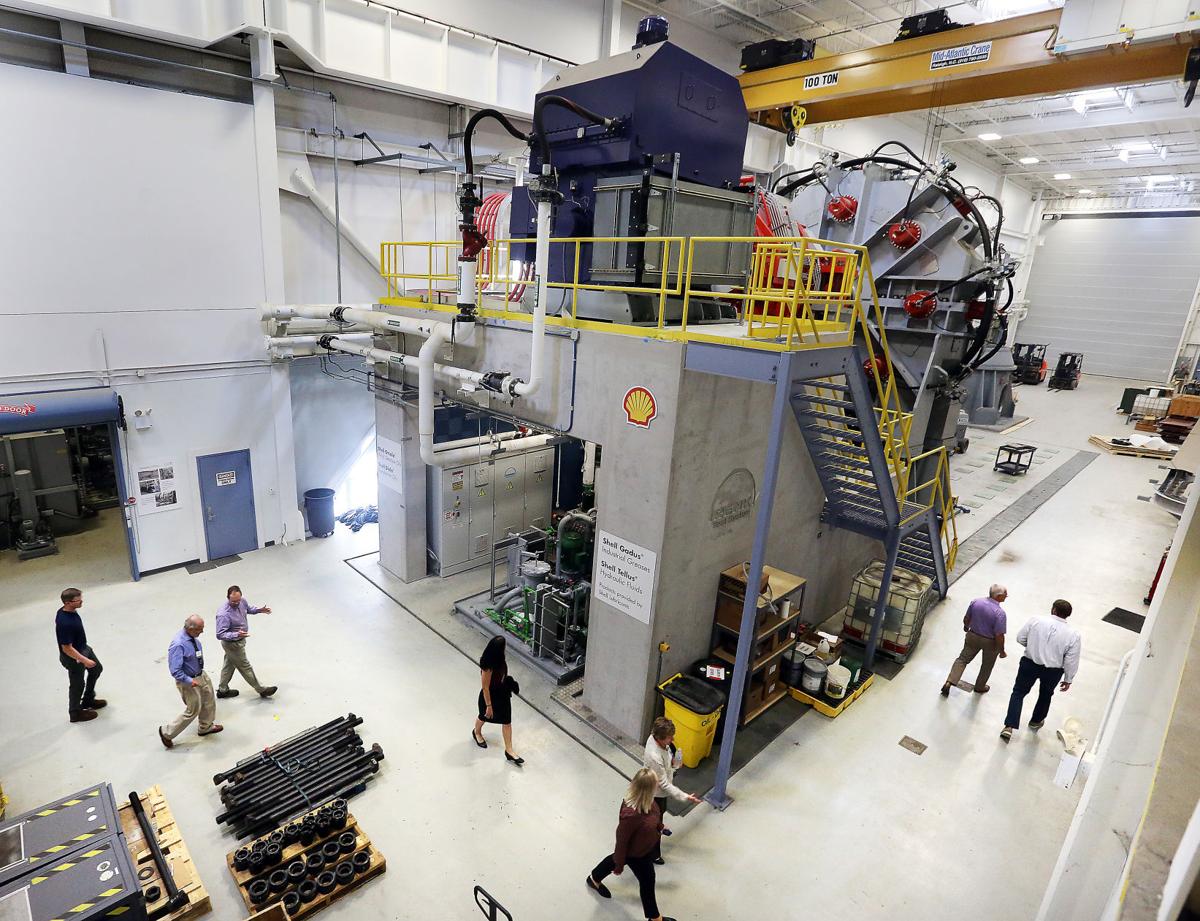 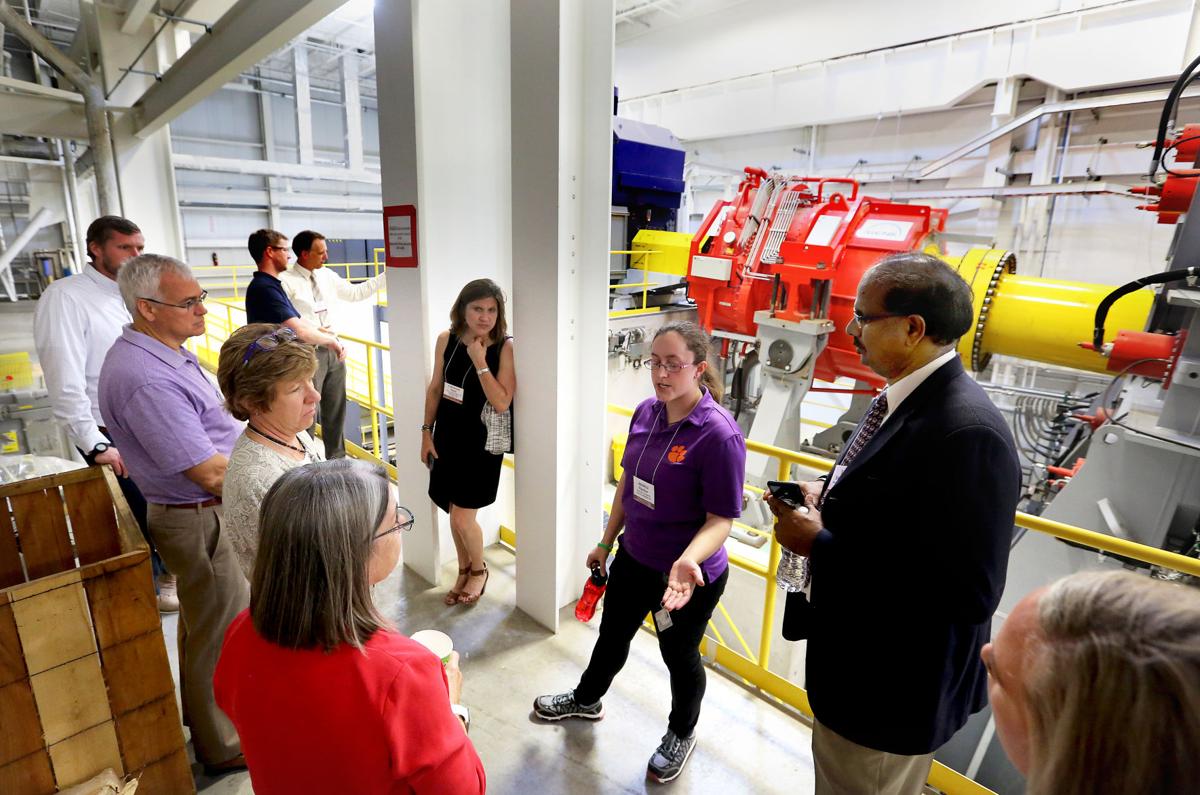 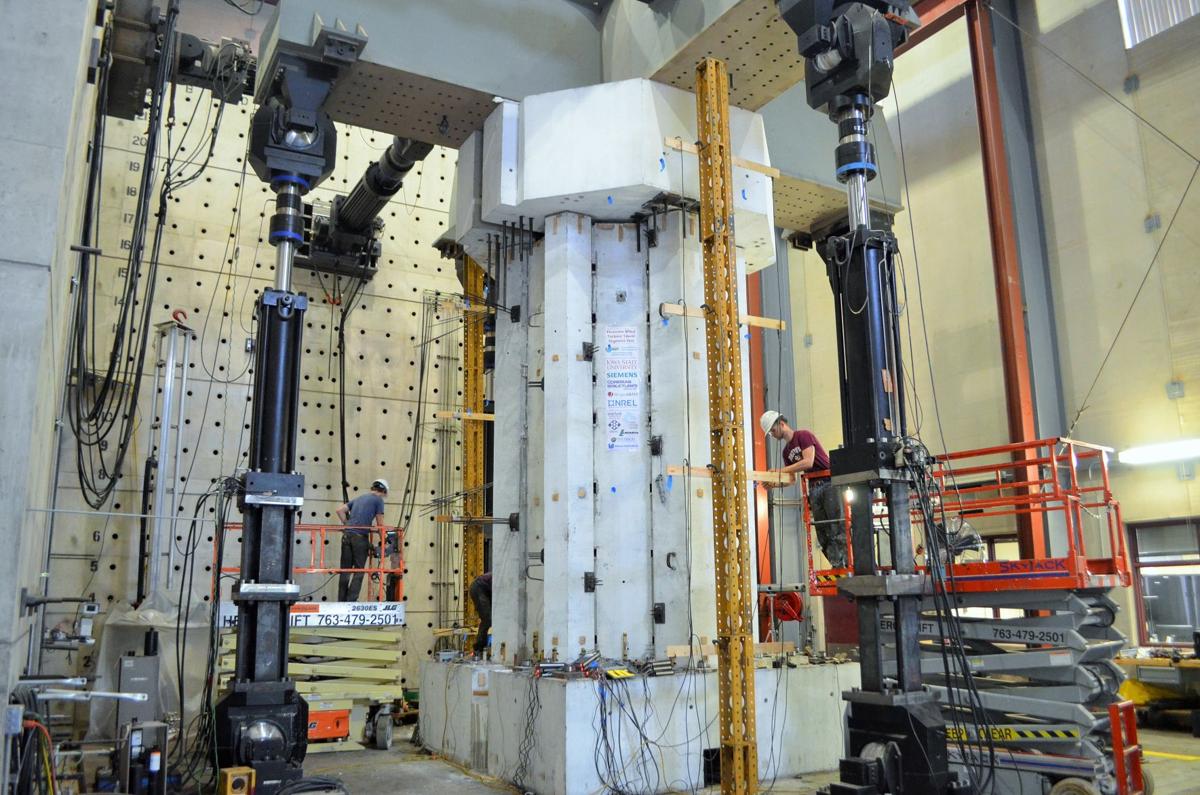 A full scale cross-section of the Hexcrete wind tower is under construction in sections to be tested for its strength. Iowa State University/Provided 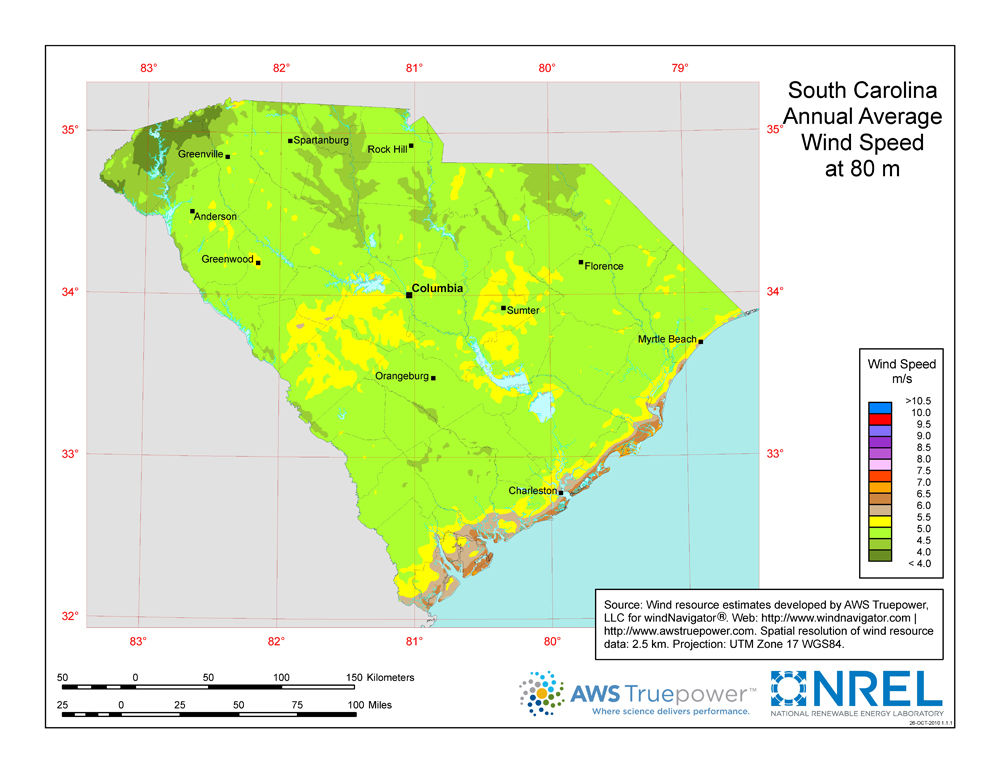 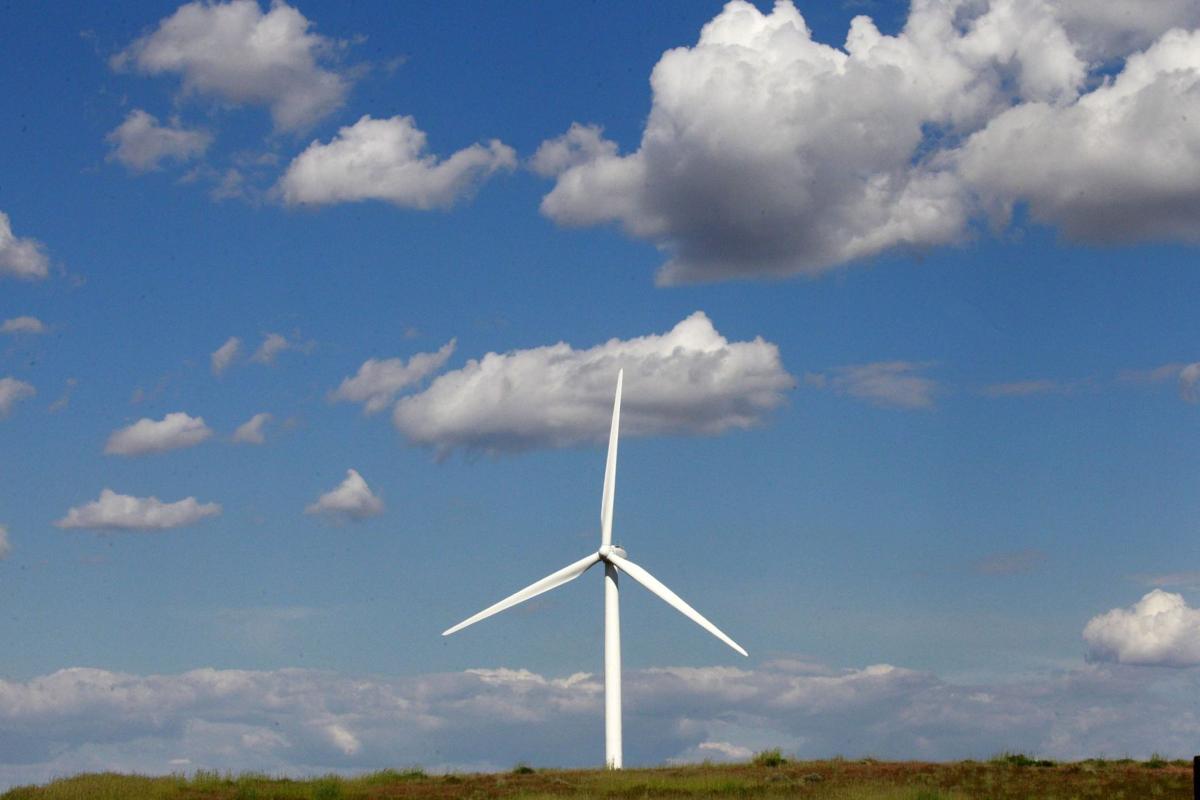 In this May 18, 2011 file photo, a wind turbine stands near Arlington, Ore. File/Rick Bowler/AP 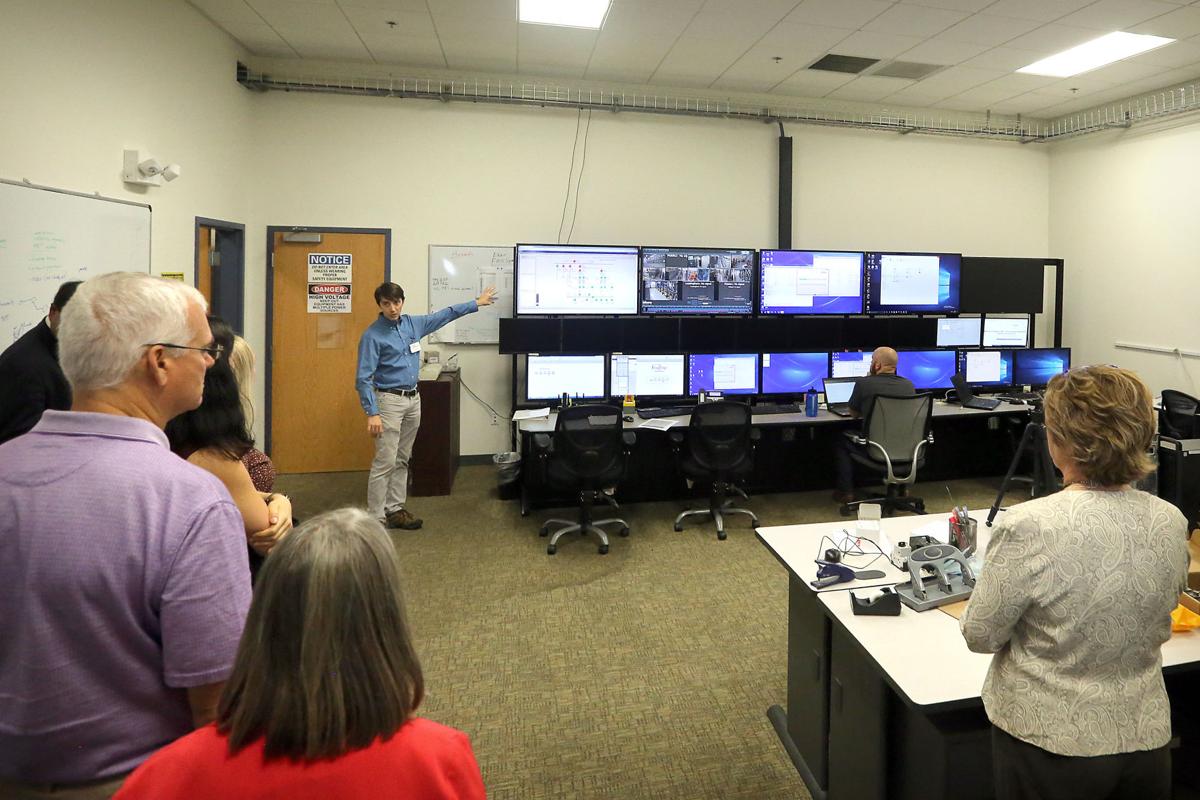 Wind turbines are silhouetted by the setting sun as they produce electricity near Beaumont, Kan. About 6 percent of South Carolina's energy is produced by renewable sources. None of it is wind. File/AP

Dead air. That's the vibe around the wind power industry in South Carolina that nearly a decade ago saw $100 million invested by public and private sources.

Progress is as flat as the long turbine blade displayed resting on the ground outside Clemson University's $98 million Energy Innovation Center on the former Navy base in North Charleston.

It hosts one of the largest wind simulators in the world — designed to test huge wind turbines.

The state-of-the-art facility was built in 2013 with $45 million in federal grants along with $53 million in private and state contributions. The intent was to provide a hub for what was widely considered an emerging industry in the state.

"It's not living up to the expectations we had," said state Sen. Larry Grooms, R-Bonneau, an early champion of the project. "Unless there's a market for wind energy, there's no market for wind turbines and there's not much to do over in North Charleston."

Much of the work being done at the center is on equipment destined to be used in other places. The current big project is a five-year $23 million testing program for a turbine designed by MHI Vestas Offshore Wind that is considered to be the most powerful in the world, an enormous machine producing enough electricity to power more than 8,000 homes.

It's intended for use in the New England and Europe.

Turbine testing at the center has been supplemented with "grid integration" testing for solar power. In other words, checking equipment that allows solar power electricity to be fed into the overall electrical grid.

The projects usually are multi-year and the center runs sometimes 24 hours per day, 7 days per week, said Randy Collins, a Clemson vice president in charge of the overall Clemson University Restoration Institute that includes the center.

Other contracts include work with General Electric, the Savannah River National Labs, and the U.S. Department of Energy, Collins said.

The center also does academic research, working at times with students. It's staffed by about 30 engineers, scientists and technicians who are assisted undergraduate and graduate students. The annual budget is about $3 million, and year to year is driven by what projects are under way.

"We're definitely paying our way," Collins said. "We are absolutely providing the testing services and what-not the facility was designed for."

Outside the walls, though, there's not much blowing in the wind.

Only about 6 percent of South Carolina's energy now is produced by renewable sources, such as solar or hydroelectric dams, according to the U.S. Energy Information Administration. None of it is wind.

The state ranks 28th nationally in the percent of its power that comes from alternative sources, and most of the new production has come from small solar farms. There is no power being produced by wind farms and nothing under construction, according to the U.S. Department of Energy.

When the Clemson center opened, the focus was on developing wind farms offshore South Carolina. In 2014, its turbine testing attracted interest from a New Jersey company looking to build a farm in the ocean along the state's upper coast; the company, however, backed off the proposal.

The wind field in spots offshore is considered strong enough to drive turbines. Generally, though, those winds have been considered too marginal and not steady enough to produce electric power cost-effectively, much less competitively.

Projects to develop that resource have virtually stalled, said Paul Gayes, the director of the marine and wetland studies center at Coastal Carolina University.

"We invested in an industry that has slowed down," Grooms said. "The investment is still on the ground. We may have been ahead of ourselves by a decade."

The center has brought in workshop after workshop trying to get wind off the ground in the state. In September, at a gathering co-sponsored by Coastal Carolina and Clemson, researchers from Iowa State University made a pitch to build a prototype "tall wind" farm in the Pee Dee farming region.

To reach tall wind, you build wind turbine towers taller than a football field is long — rising some 400 feet, which is at least 65 feet higher than most current commercial models. The researchers said it's the key to finding enough breeze overland in South Carolina to produce electricity.

They propose using mostly concrete, instead of steel, to get the wind towers to stand that high with huge turbine blades whirling.

It could be a game changer, Gayes said.

But getting a prototype wind farm going is estimated to cost $20 million. So far, about $10 million has been promised, and rounding up support was one of the goals of the workshop. Its organizers, which included Clemson, are hoping to win a federal Department of Energy grant.

That's a tough get.

Federal grants and tax credits came easy during the pro-alternative energy administration of President Barack Obama. They are drying up under the pro-oil drilling Trump administration.

The overall power industry is focusing more on natural gas and solar as alternatives to oil or coal. Federal tax credits that helped get the wind industry up and running expired this year.

The American Wind Energy Association, an industry lobbying group, reported in August that more than 57,000 wind turbines are turning across 41 states and two U.S. territories, enough to power 30 million average-sized homes. More than 200 wind farm projects are under way in 33 states, the report said.

But most are in western states. In the Southeast, only North Carolina and Tennessee are generating even modest wind power. The Amazon Wind Farm on the North Carolina coast has 104 turbines producing enough electricity to power 61,000 homes, according to Avangrid Renewables, its owner.

"There is little doubt that wind power is more competitive now than when the incentives were first introduced," reported the Council on Foreign Relations, a non-partisan think tank, earlier in 2019. "But in a market saturated with incentives for coal, gas and solar power, the wind industry will need new and innovative policies to continue propelling its growth."

Commentary: Santee Cooper and its SC customers are ready for new direction

New technologies and approaches, and the mindset to deploy them, can absolutely bring about favorable results. These lessons are directly applicable to Santee Cooper.

Duke Energy and SCE&G — which has been bought by Dominion Energy — were early proponents and contributors to the innovation center. The center was named for SCE&G and its simulator for Duke Energy.

Dominion Energy has proposed building the largest offshore wind farm in the country, big enough to power 650,000 homes during peak wind, according to a company news release — off Virginia. Duke Energy has signed a 15-year partnership to expand an Oklahoma wind farm to power 193,000 homes.

Tall towers could be a game changer. But there are a few "ifs" in the way.

Taller towers and bigger wind turbine blades have been in development for a few years. The Iowa State concept of concrete towers is one of a number of designs elbowing for room in an emerging market. The technology is promising but still largely unproven, according to a recent National Renewable Energy Laboratory study.

In marginal wind areas such as South Carolina, the tower height most likely to be competitive would be about 520 feet high — a height approaching the length of two football fields. To do that, the industry needs to come up with better and less-costly designs, the study concluded.

Sri Sritharan, a structural dynamics engineering professor who heads up Iowa State's Wind Energy Initiative, says the initiative's preliminary testing indicates that with the university's proprietary concrete construction, tower height could reach about 450 feet and might not be limited to that.

"I don't believe people in the Southeast realize that land-based technology is feasible," Sritharan said. The wind farm would demonstrate the feasibility of the product, provide a job creator and a leasing income to help sustain farming and "kickstart the process" of developing offshore wind power, he said.

The towers would be Hexcrete, a concrete-blend product built in a hexagonal, or six-sided shape and a sharp contrast to the tubular steel shell towers currently used. Built in pre-fab sections, they would be sturdier and easier to transport than the steel tubes.

It's still just a concept. Iowa State has not yet built one to size.