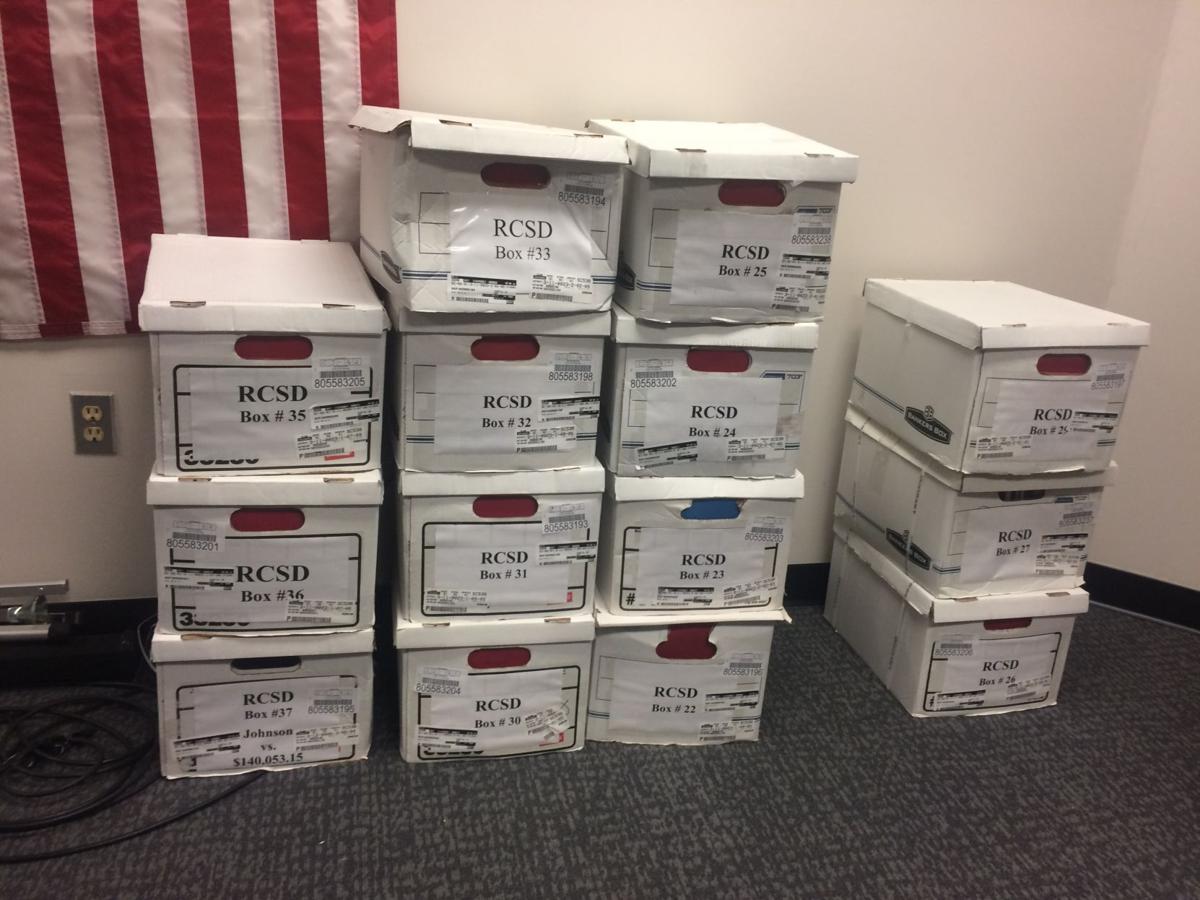 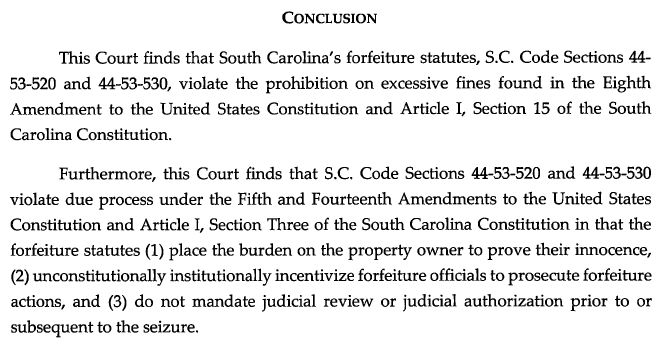 The decision sets the stage for court challenges and potentially a rewriting of state laws that allow police to seize cash, cars and other possessions from people suspected of drug dealing, regardless of whether they've been convicted of a crime or even charged with one.

South Carolina law enforcement agencies collect millions of dollars yearly from asset seizures, The Post and Courier reported in a 2017 series of articles on the issue. Advocates say the practice takes some of the profit out of drug crime and uses the proceeds of such activities to finance enforcement efforts, but many abuses have been reported.

This year, former Columbia-area prosecutor Dan Johnson was sentenced to a year and a day in prison for misusing public funds that included asset forfeiture money.

Circuit Judge Steven H. John wrote in his August ruling that "enforcement personnel have an institutional financial incentive to vigorously pursue forfeitures regardless of the merits of the action."

The Horry County case involved more than $20,000 in cash seized from Travis Lee Green of Myrtle Beach, who is serving a 15-year sentence for dealing drugs. John ruled it was unconstitutional to seize Green's money using civil asset forfeiture statutes.

“We have asked him if he would reconsider," said 15th Circuit Solicitor Jimmy Richardson II. "You need to do that before you can (file an) appeal."

Green's money was seized after undercover drug enforcement agents bought cocaine from him three times, then executed a warrant to search Green's Myrtle Beach apartment where they found copious amounts of drugs and cash.

“Our argument is that he shouldn’t be able to keep that money," Richardson said. "He sold drugs, and he’s not a pharmacist."

Richardson said that while his office challenges John's ruling, he and other solicitors and public defenders have put together a list of potential changes to civil asset forfeiture rules for state lawmakers to consider. If adopted, the changes would make asset forfeiture a criminal rather than civil matter, requiring that proven crimes be linked to the seizure of property and that a connection between the crimes and the property be established.

“I still believe that people shouldn’t be able to profit from illegal activity, any more than I should be able to keep money from a bank robbery," Richardson said.

The SUV had been purchased with money Timbs received from an insurance policy when his father died, the Supreme Court ruling states, and was worth more than four times the maximum fine Timbs had faced for a related drug conviction. Timbs had been accused of transporting heroin in the SUV, and had pleaded guilty to dealing in a controlled substance and conspiracy to commit theft.

John's ruling in Horry County went far beyond the Supreme Court ruling, declaring that South Carolina's forfeiture statutes violate the Fifth, Eighth and Fourteenth Amendments of the U.S. Constitution and the sections 3 and 15 of the S.C. Constitution.

South Carolina's statutes, John wrote, "would allow law enforcement to seize millions of dollars in assets from an individual when the maximum fine authorized by law is minimal or when no crime has been committed at all." 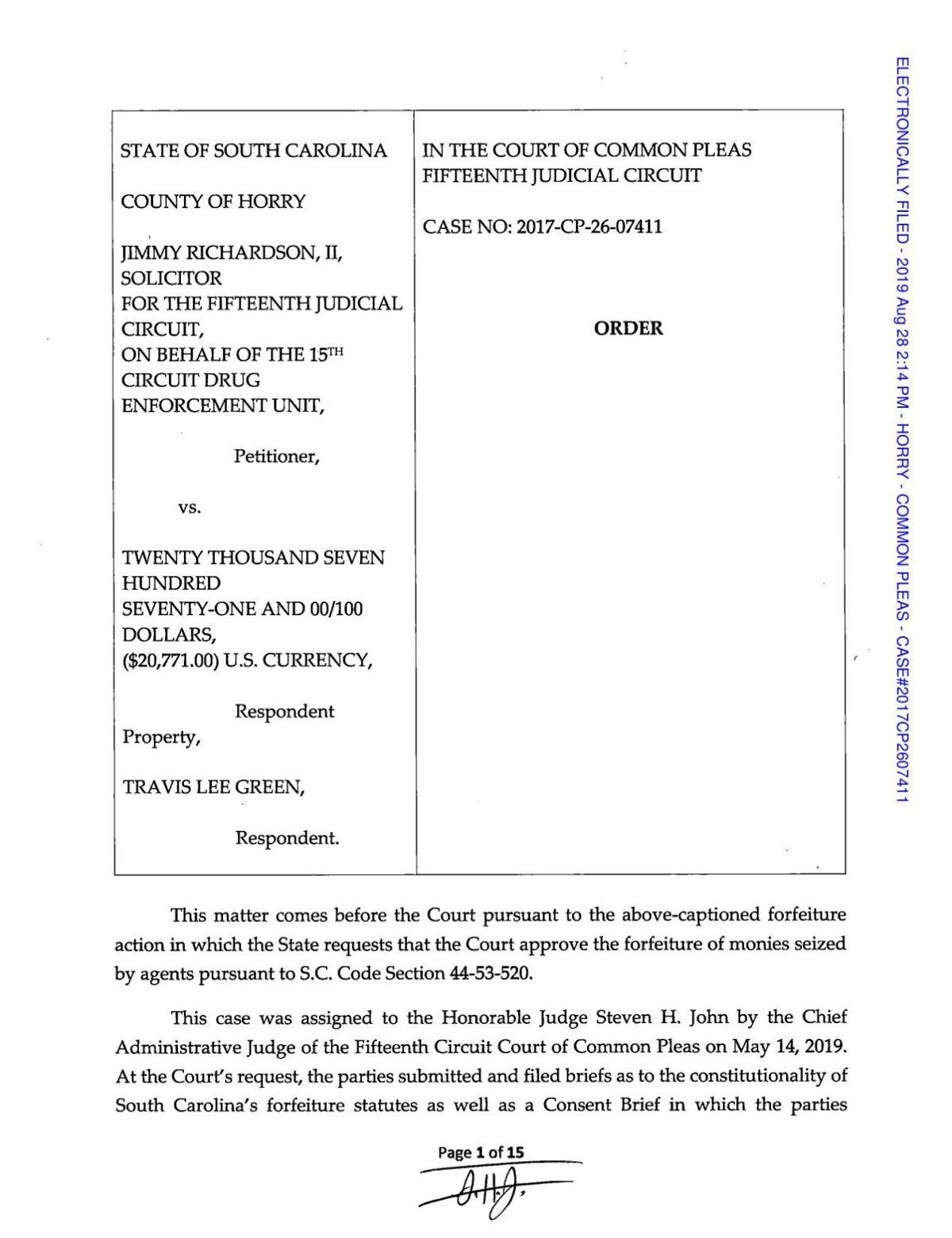 Police agencies that seize cash and property through civil asset forfeiture get to keep most of the money, while prosecutors and the state government get smaller shares.

For example, several years ago, Hampton County sheriff’s deputies found $1.7 million stashed in secret compartments of an SUV during a traffic stop on Interstate 95. The money and vehicle were confiscated, the driver walked away with no criminal charges and the Sheriff's Office got to keep $1,252,731, which the department used to buy seven new cars and trucks, as well as a building.

Police have also seized cars, furniture, clothing, golf clubs, housewares and even comic books. Typically, they are auctioned on govdeals.com.

Richardson said that while John's ruling is being appealed, he's suggested Horry County police officials should stop seizing vehicles under asset forfeiture laws but continue to seize cash and guns.

“If you seize a car, you’ve got to keep it seized and hold it until it’s settled and make sure it doesn’t get torn up in the process," he said.

If money or property is seized, it’s up to the owner to claim it and fight to get it back. The owner must bear the cost of a lawyer, and the burden is on them to prove there’s no connection to criminal activity.

Often, the cost of a lawyer could exceed the amount of cash seized.

“This ruling is a positive first step in strengthening South Carolina’s due process rights and putting our state on a path to a more just system," said Andrew Yates, South Carolina director of Americans for Prosperity, a libertarian-leaning conservative advocacy group. "Curbing this constitutional abuse will help South Carolinians not have to prove their innocence to keep their own property."

Federal civil asset forfeiture regulations were eased when Barack Obama was president, then tightened again in 2017 after Donald Trump became president. At the time, Charleston County Sheriff Al Cannon called the reversion to tougher rules a "very positive development for law enforcement and for the community at large because there are significant assets that are the product of all sorts of criminal activity."

The Horry County ruling is not precedent setting for the state, and a hearing is scheduled Dec. 6 for John to hear a motion to reconsider his ruling. Such motions are rarely successful but are required before further appeals can be filed.