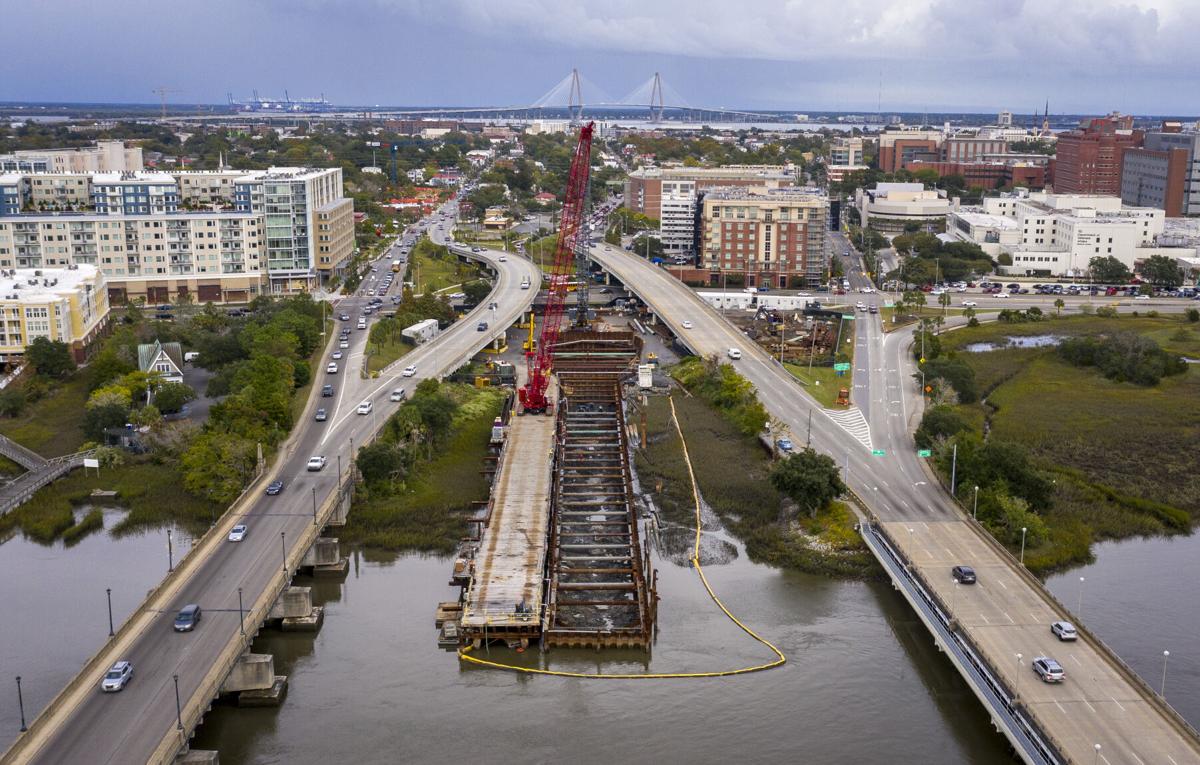 Excavation between the two Ashley River bridges continues on Tuesday, Oct. 20, 2020, in Charleston as the city continues work on its many drainage-improvement projects. Andrew J. Whitaker/Staff 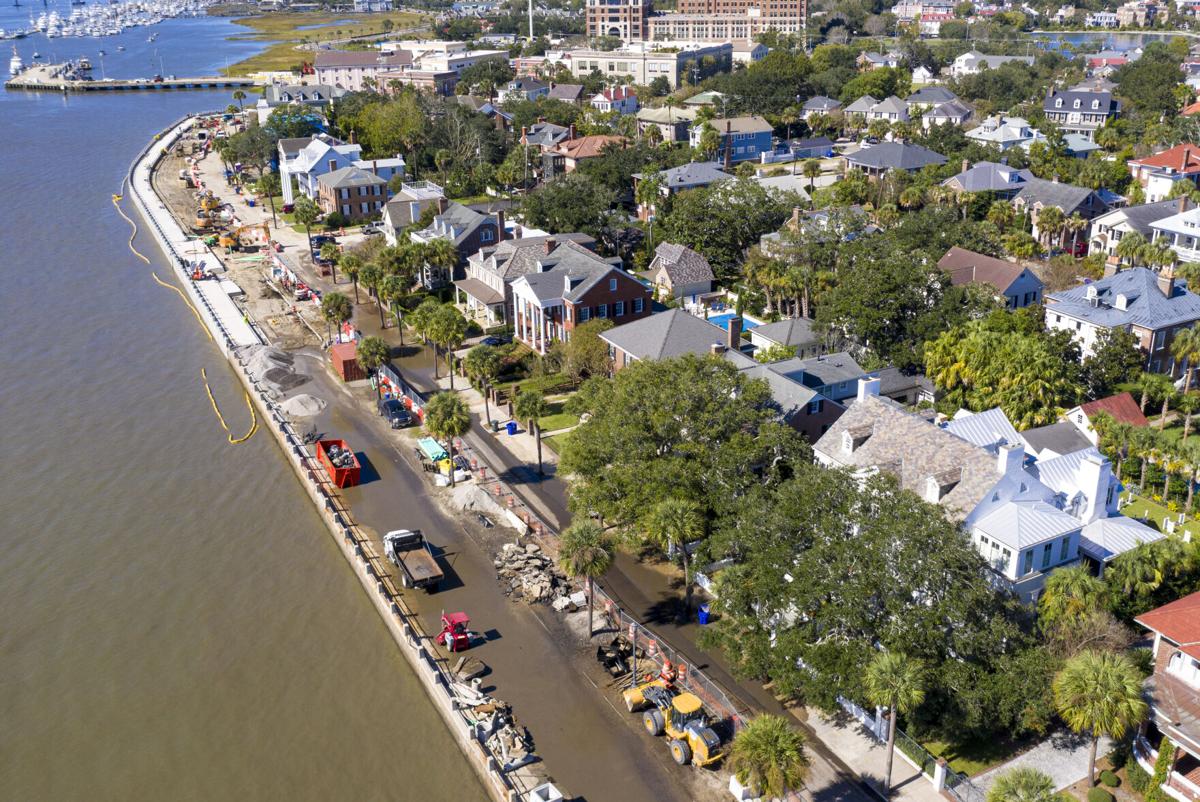 A view of construction along Murray Boulevard on the Low Battery sea wall project on Monday, Oct. 19, 2020, in Charleston. An Army Corps of Engineers proposal to build a higher wall could add 3 feet to The Battery. Andrew J. Whitaker/Staff 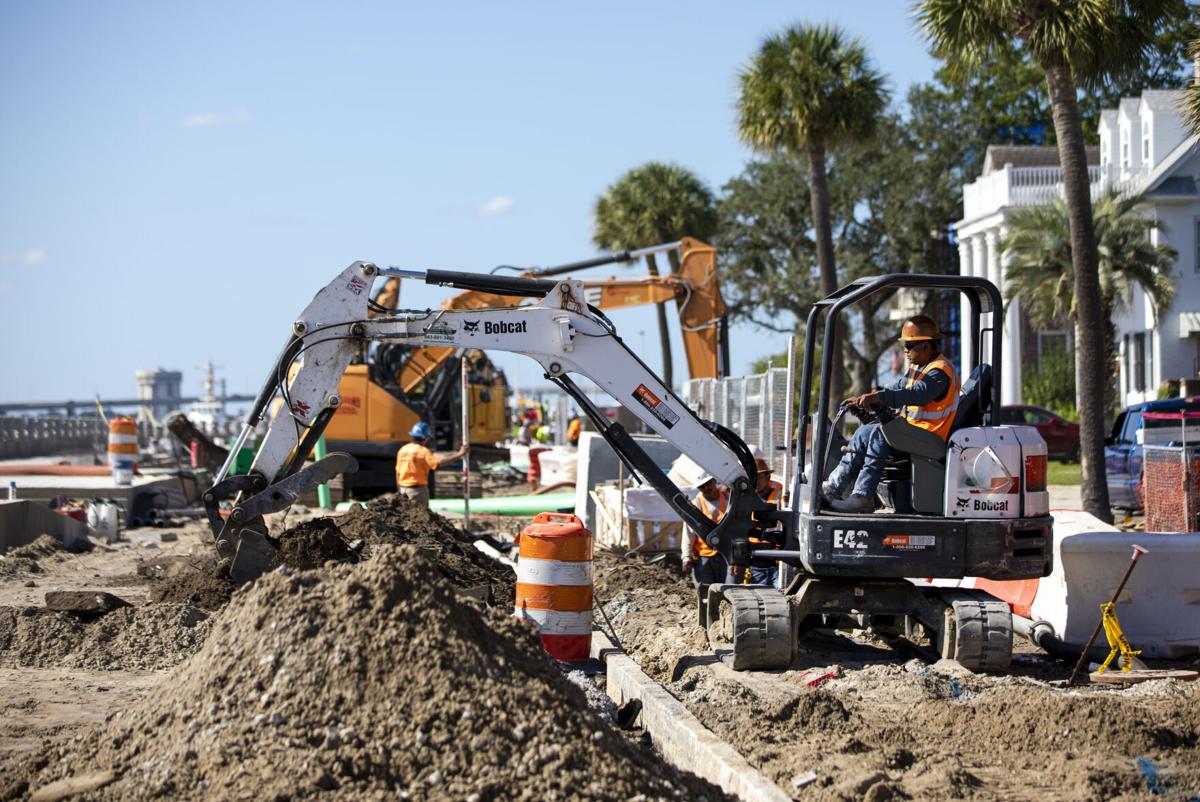 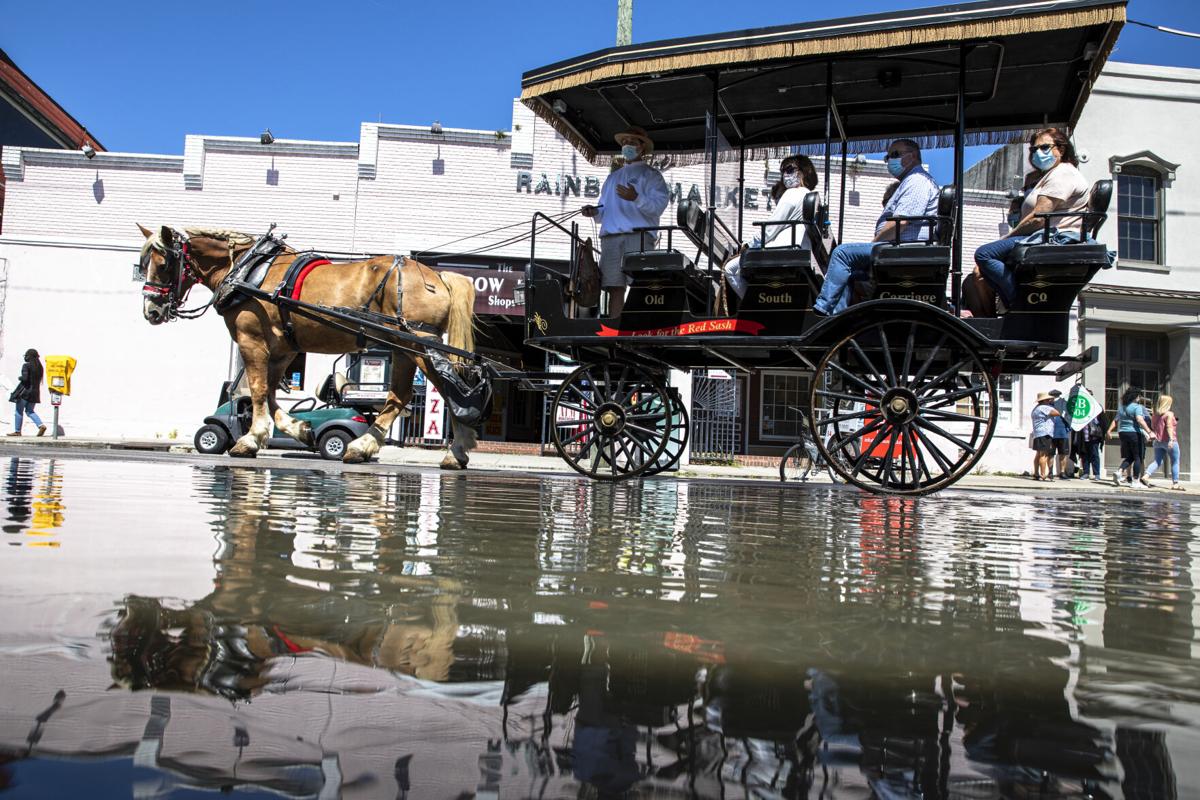 A carriage tour makes its way down North Market Street through floodwaters on Monday, Sept. 21, 2020, in Charleston. Andrew J. Whitaker/Staff 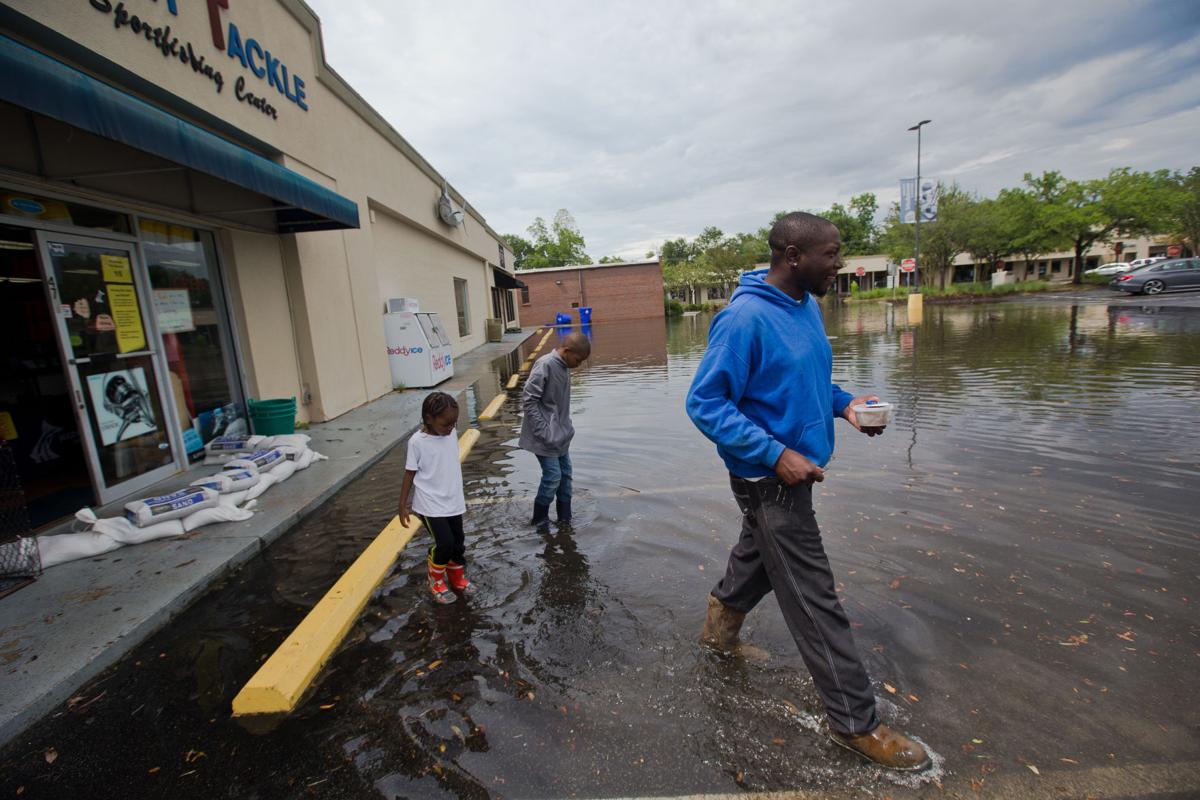 Ricky Frasier and his kids, Tyler and Ricky Jr., walk out of Haddrell's Point Bait and Tackle on Wednesday, May 20, 2020, in West Ashley. Andrew Whitaker/Staff 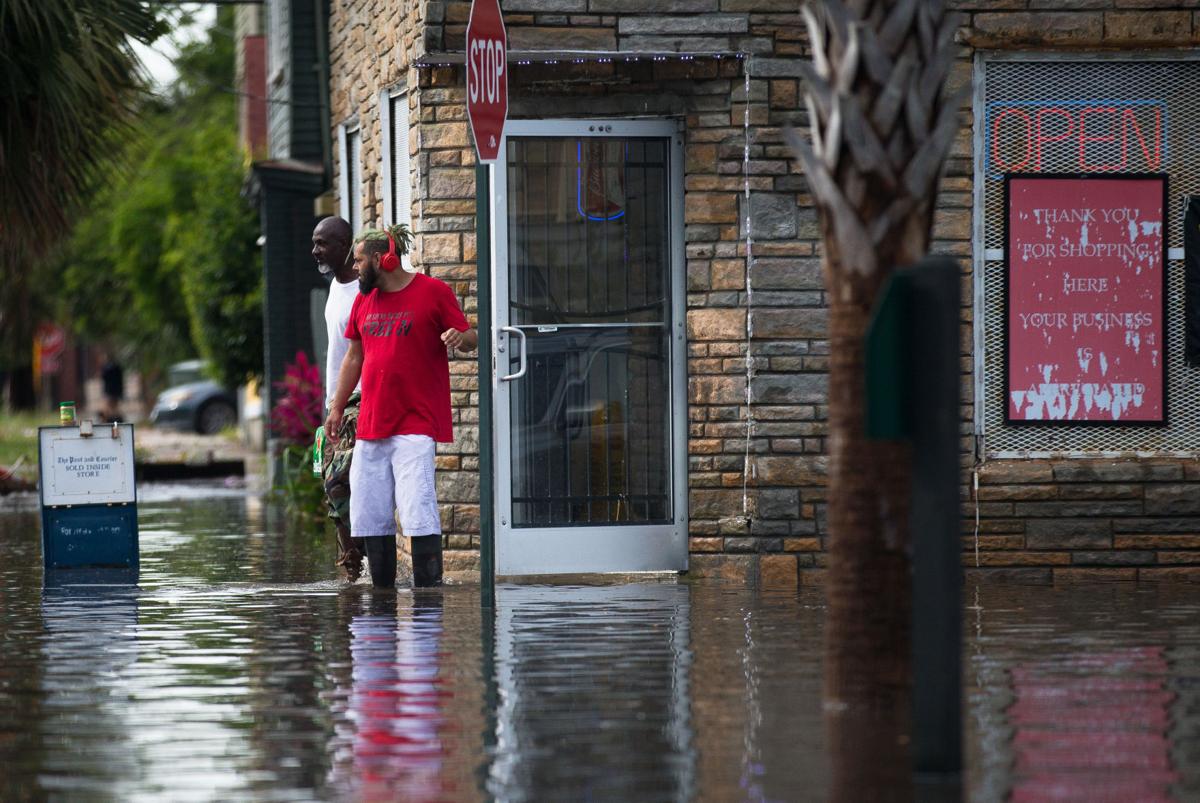 People leave President Market during flooding on Wednesday, May 20, 2020, in Charleston. The market is just across from the Gadsden Green public housing complex. Andrew Whitaker/Staff 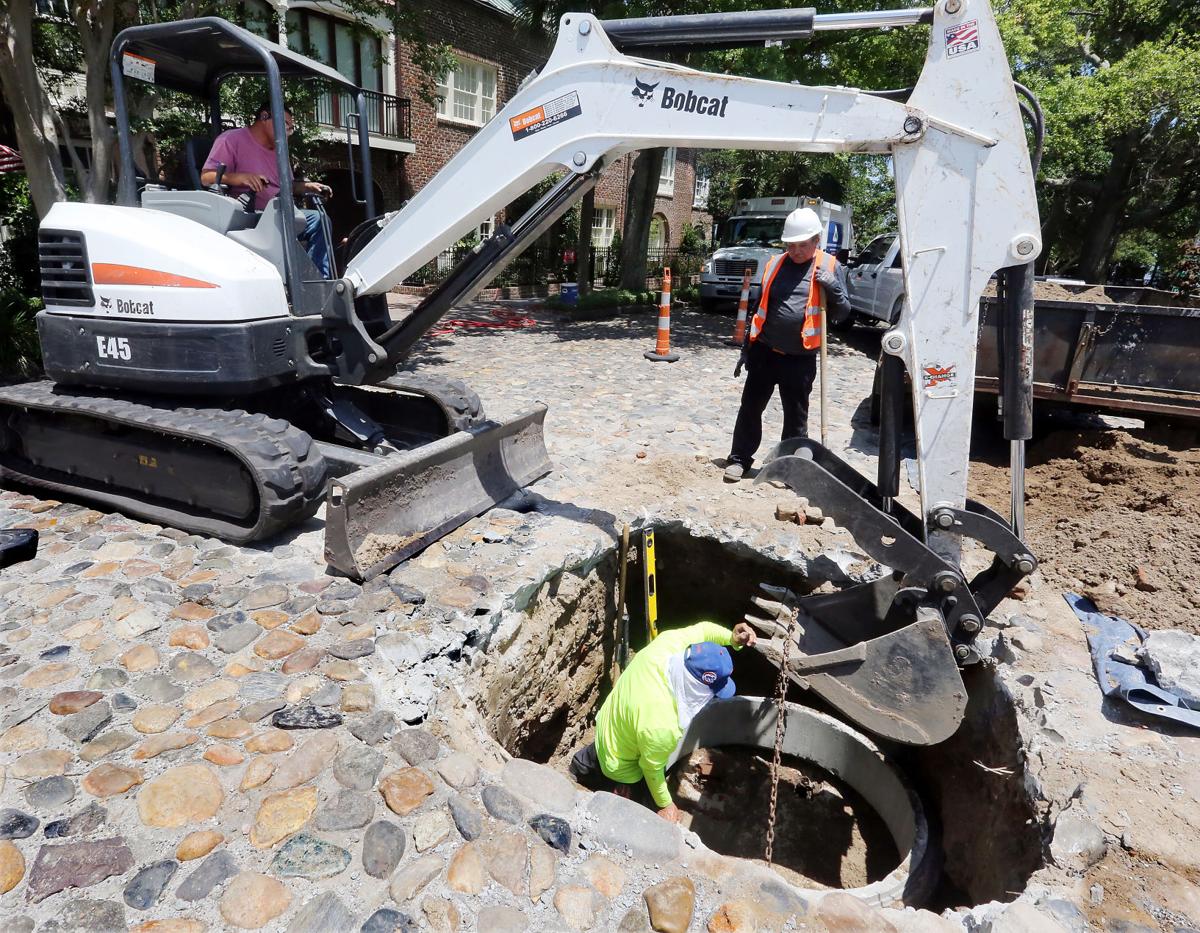 A Palmetto Gunite crew member sets a manhole riser on the top of an arched drainage tunnel on South Adgers Wharf near East Bay Street, Monday, May 20, 2019. Brad Nettles/Staff 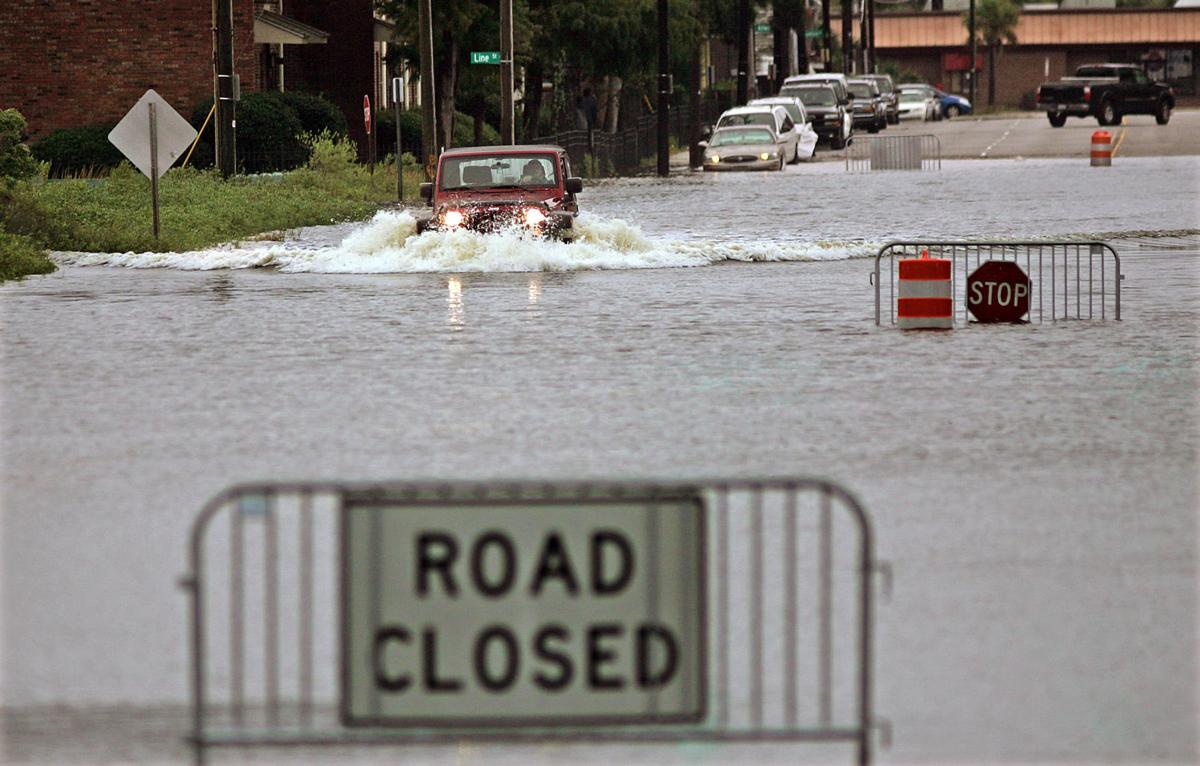 A driver makes his way through floodwaters on Hagood Avenue in Charleston in 2016. File/Staff 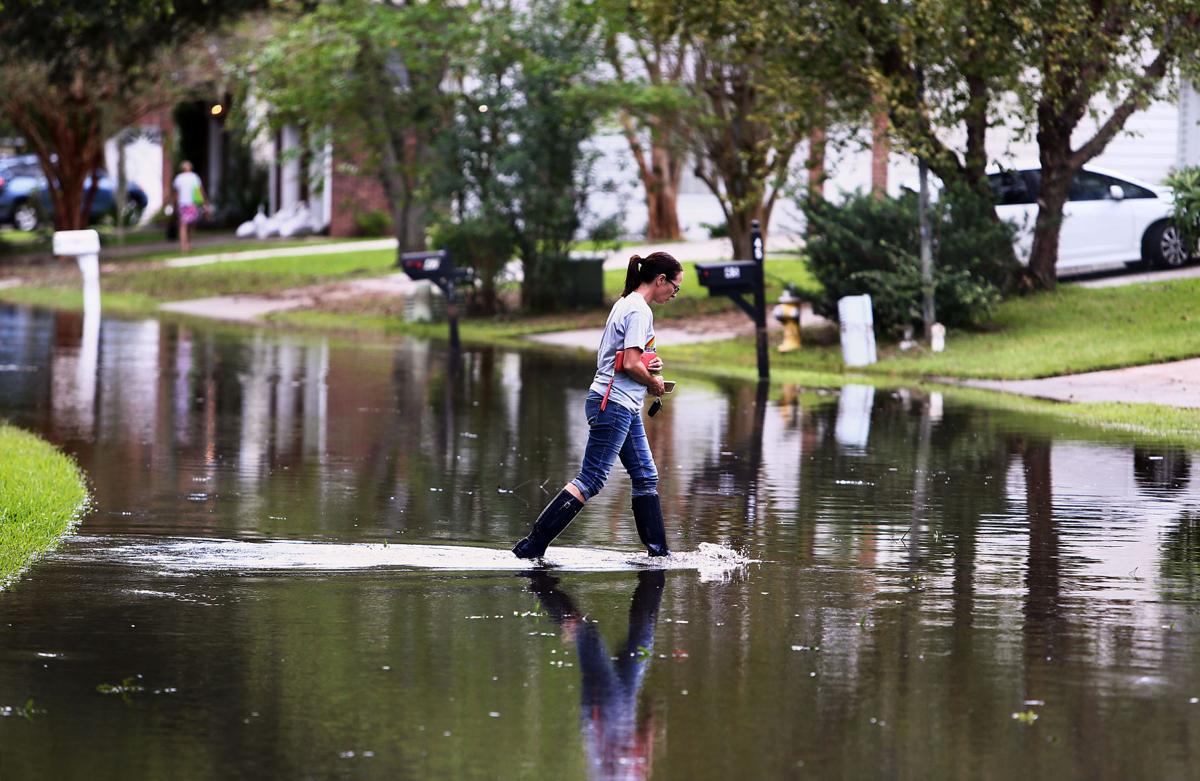 "You get so tired of fixing it up — and three or four weeks from now, I could be flooded again," said Alison McLeod, who was visiting Wolk Drive in Shadowmoss in 2017, which floods like the subdivision's Bridge Pointe cul-de-sac where she lives. File/Staff​ 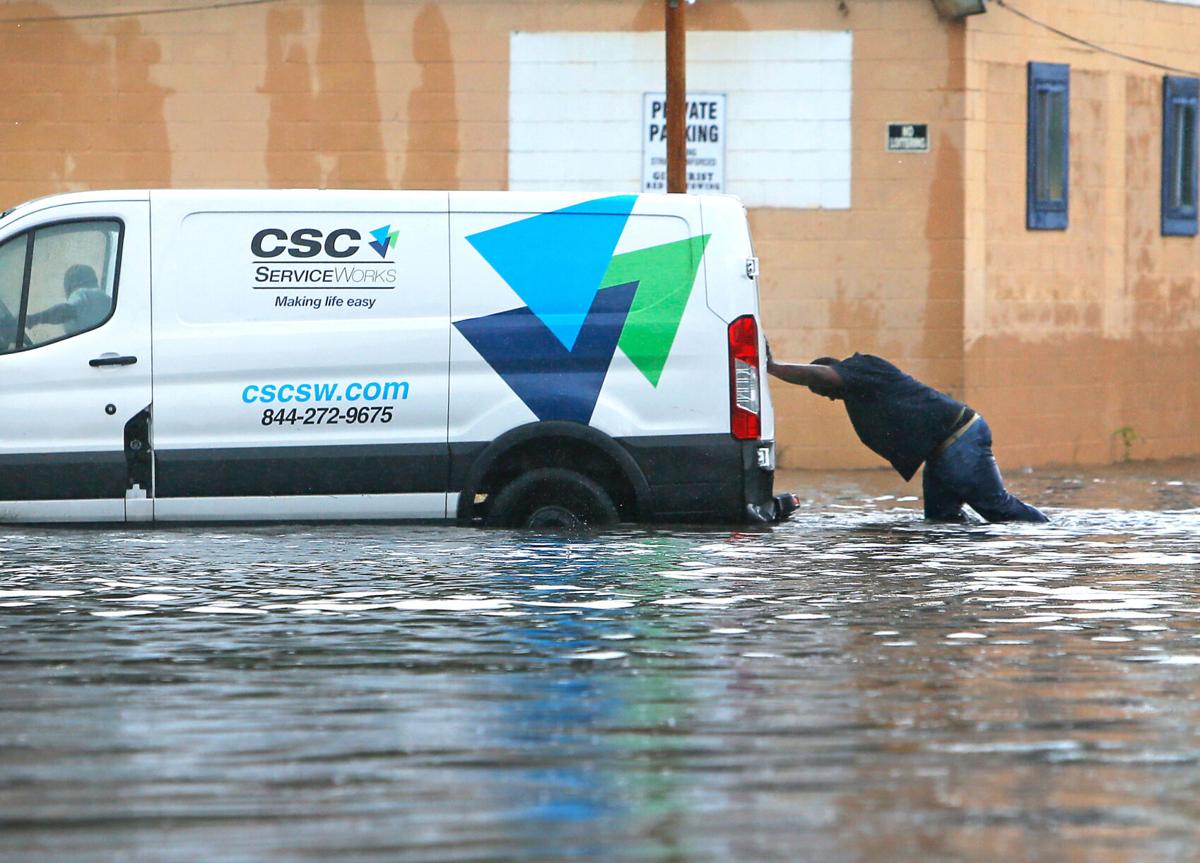 A man pushes his truck through deep water at the intersection of King and Huger streets Tuesday, May 23, 2017. File/Staff 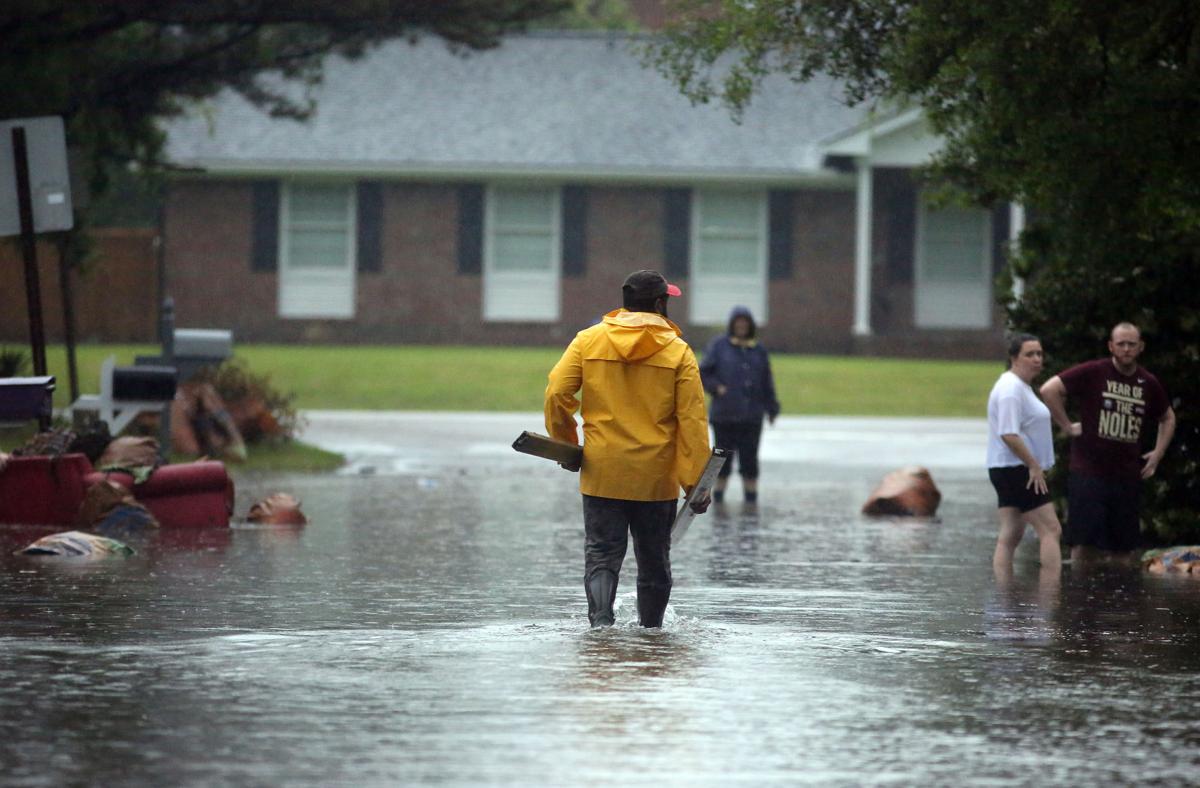 Excavation between the two Ashley River bridges continues on Tuesday, Oct. 20, 2020, in Charleston as the city continues work on its many drainage-improvement projects. Andrew J. Whitaker/Staff

A man pushes his truck through deep water at the intersection of King and Huger streets Tuesday, May 23, 2017. File/Staff

Charleston's nearly $500 million investment in fixing the city's drainage woes is continuing as residents, businesses and first-responders find themselves more frequently wading through flooding on both rainy and sunny days.

Surveyors, drain-cleaners and construction workers fan out across the city daily to combat spates of rising water caused by both climate change and years of development.

In February, City Council, including its newly elected officials, was briefed on the status of nearly a dozen major projects before the coronavirus pandemic ground nearly every type of business to halt.

Since then, Charleston Stormwater Director Matthew Fountain says projects are on track and some new proposals should be presented to City Council in the coming months.

That makeshift dock between the two U.S. Highway 17 bridges over the Ashley River isn't the start of the bicycle and pedestrian bridge, it's an excavation site for crews to dig 60 feet below the riverbank.

About 40,000 tons of dirt should be removed from the site by December, Fountain said. From there, concrete will be poured to line the new system under the two bridges and the Septima P. Clark Parkway, and a large water tank, called a wet well, will be installed. That will continue through next year and most of 2022.

Fierce rainstorm strikes Charleston, a reminder of how climate change has amped up weather

Work on the $198 million Spring/Fishburne drainage project hit a milestone in June with completion of the mile-long tunnel underneath the parkway, commonly referred to as the Crosstown.

Fountain said City Council will soon consider a contract for the pump station. Completion remains on schedule with installation of a pump station in 2023.

The work being done is to target flooding of about 500 acres on the peninsula covering Hampton Park to the north, Meeting Street to the east, Charleston Center Drive to the south and Lockwood Drive to the west.

A study offering a "basket of different options" was recently completed by North Charleston-based Davis and Floyd and Kansas-based Black and Veatch, Fountain said. Those options include tunnels and surface improvements.

The area spans about 800 acres on the peninsula, from the Ashley River on the west, north to Cannon Street, east to about King Street and south to the tip of the peninsula.

Charleston's Traffic and Transportation staff are looking at options to building a wall — which is different from the Army Corps of Engineers' proposed flood-control wall around the city — starting at the Coast Guard Station and along Lockwood Boulevard. The wall would be as high as the current Low Battery, and, Fountain said, would prevent sunny-day flooding.

About $40,000 has been set aside for conceptual design of that project.

This is separate from the the Corps' proposed $1.75 billion, 8-mile wall around the peninsula. That plan could change the city's approach to Calhoun West.

Additionally, Fountain said, the design for a tunnel to move the water that now floods the medical district to the Ashley River underneath Ehrhardt Street on the Medical University of South Carolina's campus, is 90 percent complete. Final permits haven't been issued because the city is waiting for MUSC to finalize an easement agreement, Fountain said.

The tunnel would run underneath Ehrhardt Street and connect to President and Cannon streets, tying into the Spring/Fishburne project. It would drain about 27 acres into Spring/Fishburne.

Fountain said there's $1 million earmarked for design of the project, with an estimated $12 million price tag. The city will apply for Community Development Block Grant mitigation funding to assist.

City staff have identified, in conceptual planning, three pump stations at the Ralph H. Johnson VA Medical Center, the upper part of Long Lake, and at the Broad Street and Lockwood Boulevard bend, as short term solutions to flooding. The Army Corps of Engineers proposed wall around the city, could alter the city's approach, though.

Machinery that has been stationed along Murray Boulevard from the Coast Guard station on Tradd Street to Rutledge Boulevard will soon move east about 1,000 feet.

The first of several projects to raise the Low Battery wall facing the Ashley River about 3 feet should be done in December. That'll mean traffic that's been barred from using the northbound lane in that area will be reopened, but the southbound lane of Murray Boulevard will be closed off for road repaving.

The next phase of construction will span from Rutledge Boulevard to Ashley Avenue near Council Street. Construction could begin in the new year.

During heavy rain, about 2 to 4 feet of water fills the Huger and King street intersection. That'll likely stay the same through the next year as old, small pipes are replaced with larger ones and inlets are built for an eventual new pump station.

The area includes about 15 acres from Grove Street at the northernmost point, Ashley Avenue to the east, Sumter to the south and Hanover Street to the west.

Fountain said construction of the pump station could begin in early 2022. Charleston Water Systems is expected to redo its waterline in that area, as well.

All told, the price tag could reach $8 million, Fountain said.

About $15 million of the total $40 million drainage project in the downtown Market Street area is done.

Fountain said the city approved Dominion's plan to place powerlines below ground in that area, but Dominion hasn't set a project timeline.

"Once those plans are set and underway, we can go for our construction bidding on that project," Fountain said.

Fountain said construction is likely to begin next year.

Roughly 900 acres on the peninsula are impacted by failing brick archways under the city’s streets, once used for sanitation and drainage.

The next area to be improved is about 1,400 feet on Limehouse Street. City Council is expected to review a $1 million contract, and, if approved, could begin at the end of this year or early 2021.

The area experiences flooding during heavy or repeated moderate rains, causing extensive damage to some homes and dangerous conditions for drivers and pedestrians in those neighborhoods. The stormwater pump station was outdated, outmoded and undersized. The city decided to go with a gravity system instead.

The area includes Marvin Avenue to the north, Old Town Road to the east, Paula Drive at its most southern point and west of Camellia Road as the westernmost part.

The $20 million project continues to wait on delays from AT&T moving an underground transmission line.

Fountain said AT&T is "on the verge" of getting permits from the state Department of Transportation and could set a schedule this month. AT&T needs to relocate a concrete-encased bank of conduits for electric and telephone lines so the city can redo the canal there.

The area is historically old phosphate mines and marshes. It is about 80 percent developed, with mostly residential but some commercial development in place. So far, the city has spent about $3.7 million for stormwater runoff improvements. Work started in 2017.

The area includes Ashley River Road to the north, Glenn McConnell Parkway to the south, just east of West Ashley Park and Church Creek to the west.

The city received a $1.5 million matching grant from the National Fish and Wildlife Foundation for construction of rain gardens and protected marshland, Fountain said. It would primarily be spent in the Shadowmoss neighborhood, where homes were purchased and demolished last year.

After City Council finalizes a contract, work could begin in November, Fountain said.

Peninsula's East Side: $100,000 worth of pipes cleaned, rehabbed

Engineers from AECOM did a survey of the 200-acre East Side this summer, and city crews cleaned and rehabbed about $100,000 worth of pipes.

Fountain said improvement ideas could be presented by the middle of next year.

City and county leaders are finalizing the cost-sharing of four projects in the basin, with an agreement expected before City Council in December.

Engineering firm AECOM made a list of recommended projects and is finalizing the scope of work for two projects before it is presented to City Council.

That work area includes Maybank Highway on the north, Folly Road on the east, Ellis Creek on the south, and Riverland Drive and Woodland Shores Road on the west.

The county would cover the costs of road construction, Fountain said.

The city recently awarded a contract to Thomas Hutton Engineering.

Fountain said surveyors can be expected in the area throughout October.