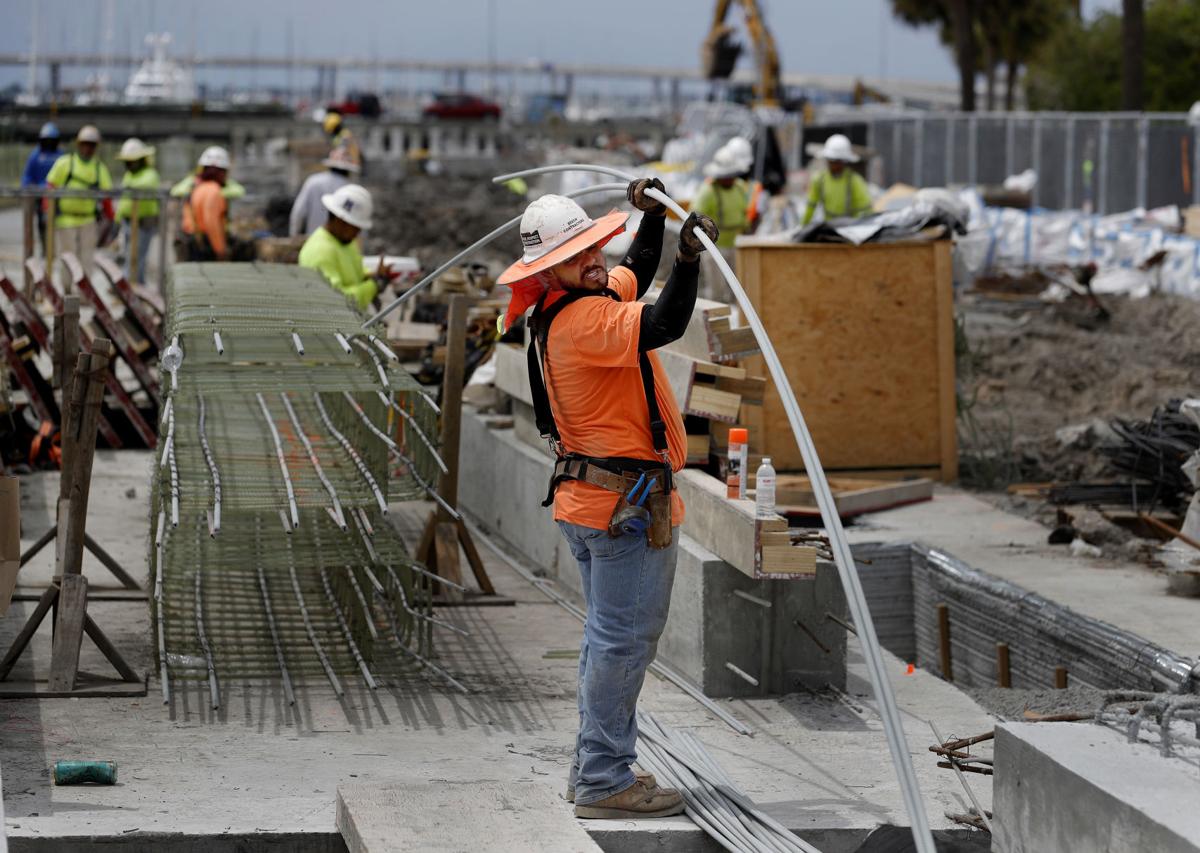 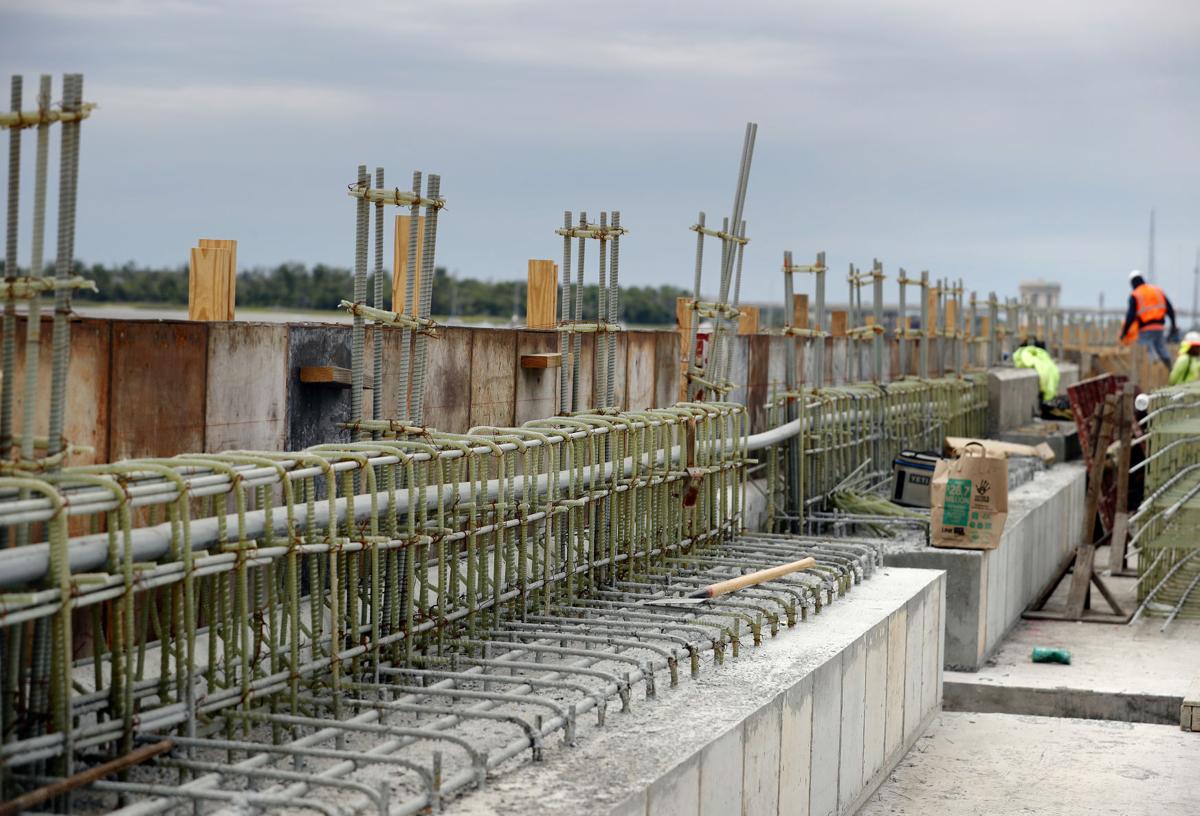 Construction crews work on the Low Battery  project that involves building up the century-old seawall along Murray Boulevard between Tradd and Ashley streets Friday, May 8, 2020, in Charleston. Grace Beahm Alford/Staff 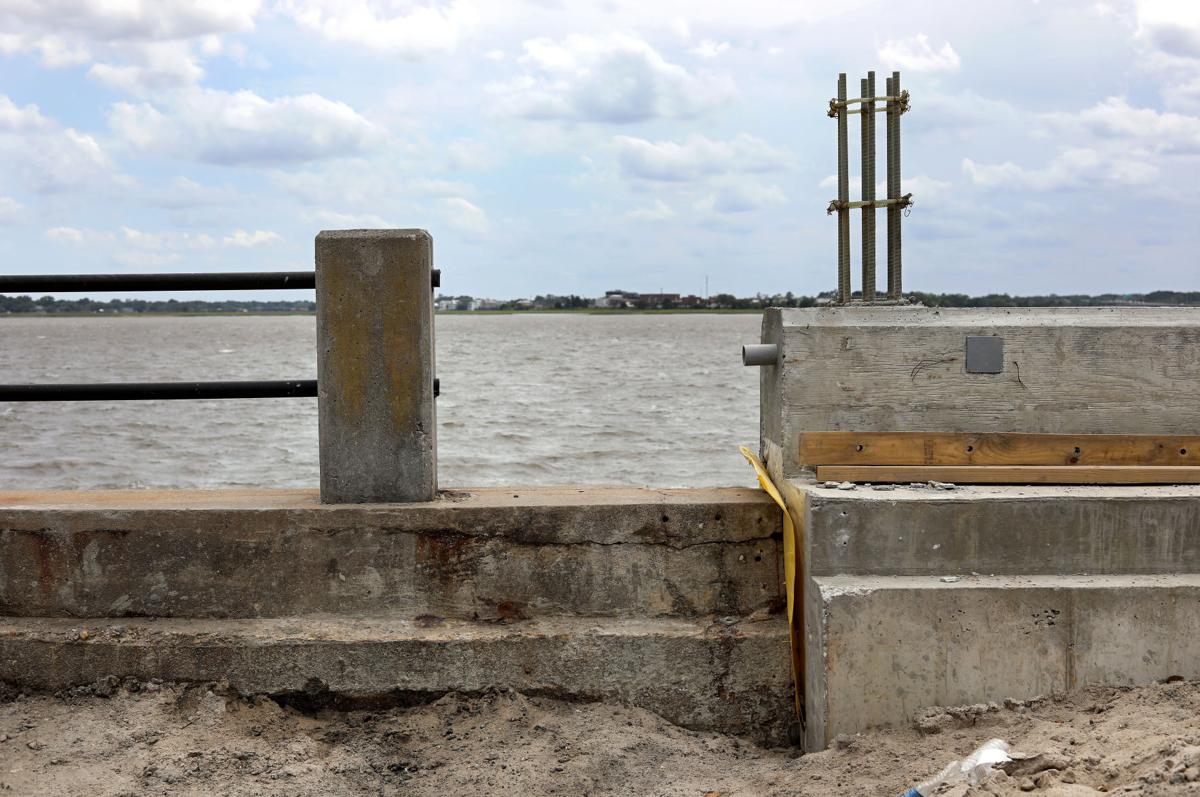 A portion of the old Low Battery seawall beside the new construction along Murray Boulevard Friday, May 8, 2020, in Charleston. Grace Beahm Alford/Staff 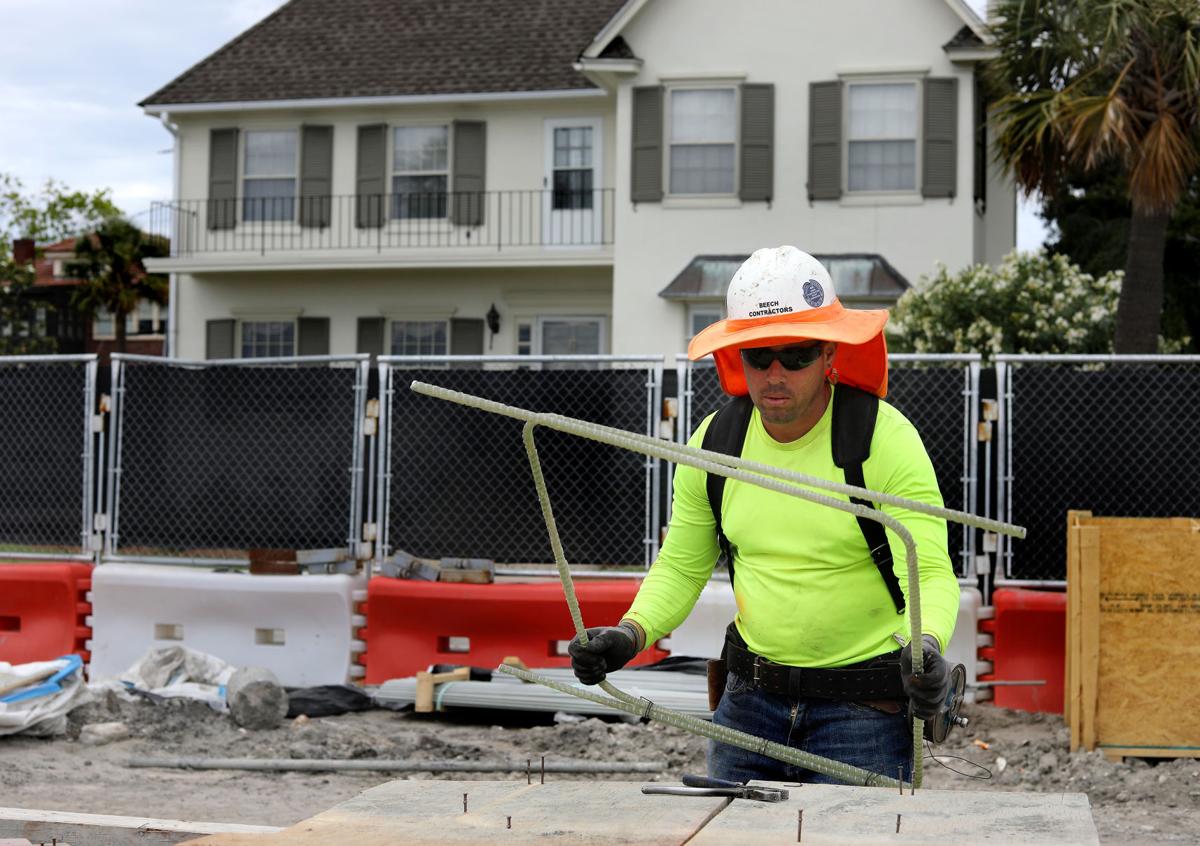 Fiberglass rebar is constructed as crews work on the Low Battery wall project that involves building up the century-old seawall along Murray Boulevard between Tradd and Ashley streets Friday, May 8, 2020, in Charleston. Grace Beahm Alford/Staff 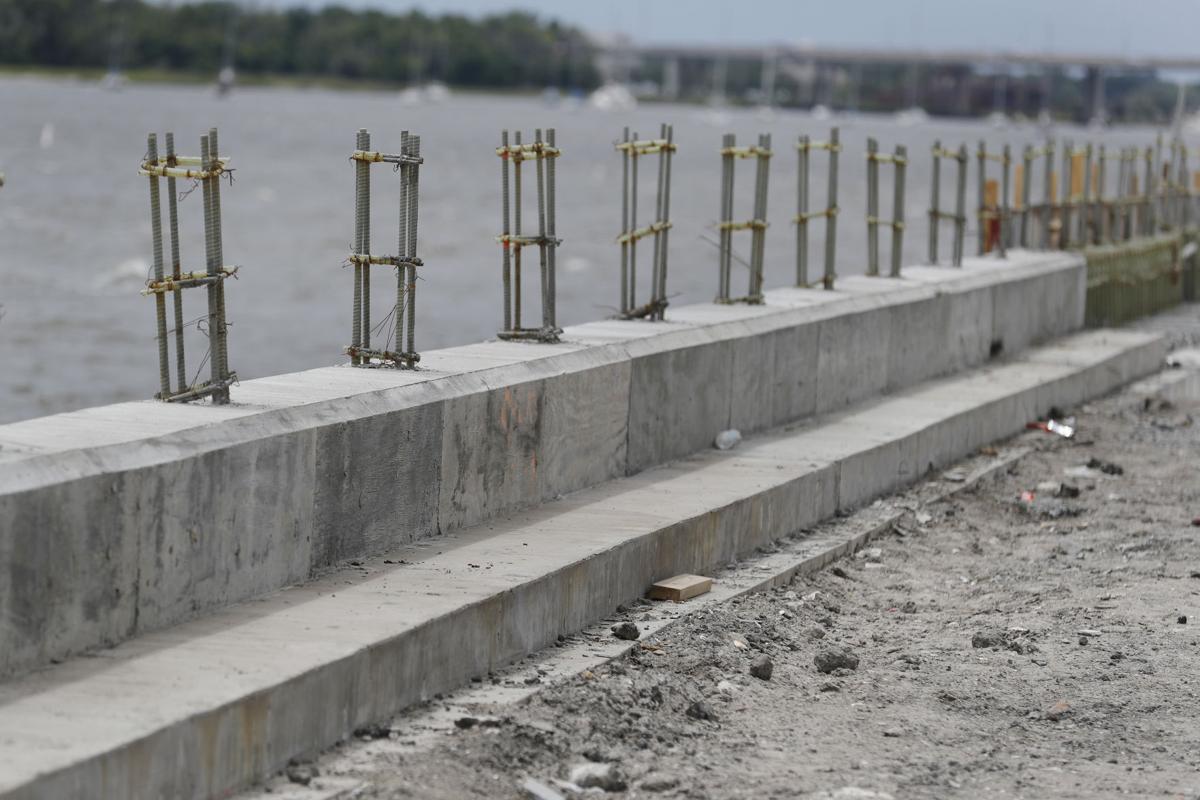 The Low Battery wall project, which involves building up the century-old seawall along Murray Boulevard between Tradd and Ashley streets Friday, May 8, 2020, in Charleston. Grace Beahm Alford/Staff 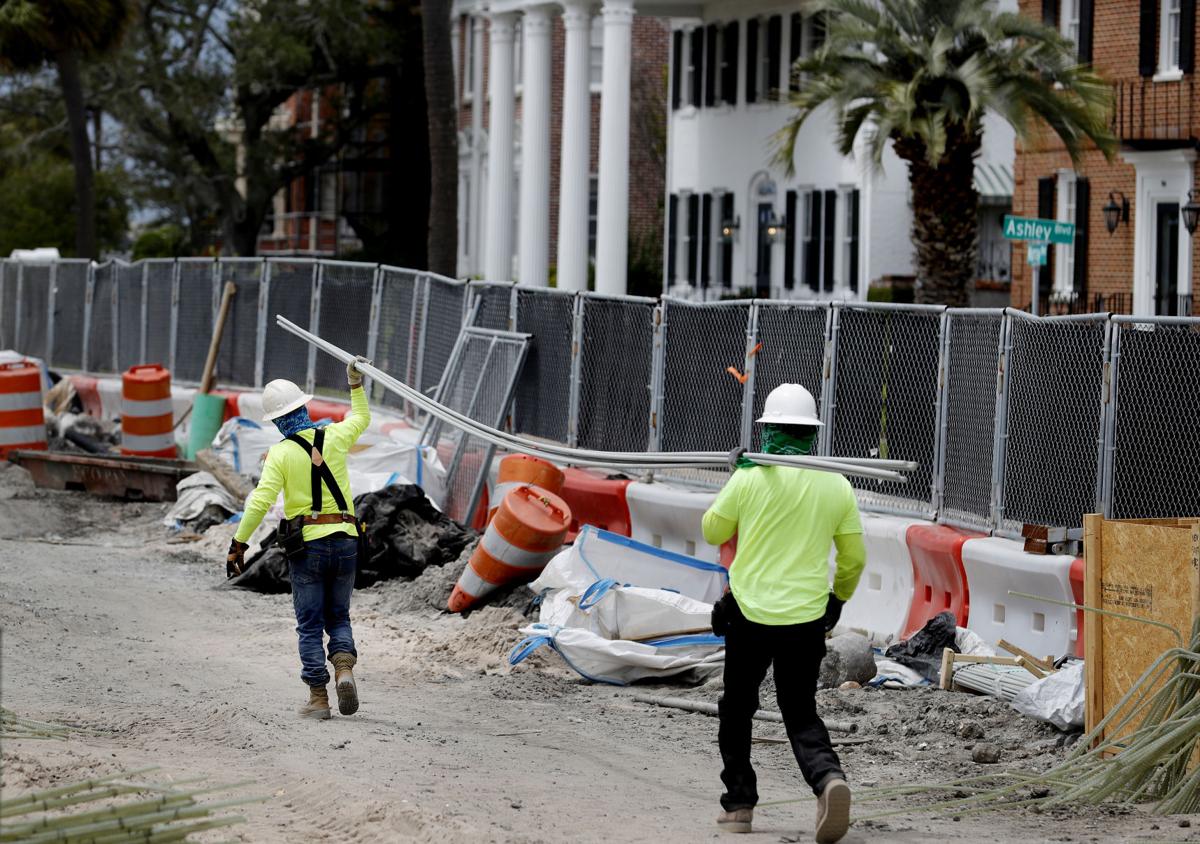 The Low Battery wall project, which involves building up the century-old seawall along Murray Boulevard between Tradd and Ashley streets Friday, May 8, 2020, in Charleston. Grace Beahm Alford/Staff

For those living near the Low Battery construction project, and those who enjoy a walk along the water there, the last few months may have felt like a lot of digging and big machines coming and going.

In the past month, though, work has risen to a new height, with concrete poured near the Coast Guard Station on Tradd Street nearly 3 feet higher than the original wall.

"Everything before was underground," he added. "You can't really see pile installation or putting in polyurethane and replacing waterline. You don't really see it but it impacts a lot of people."

While the coronavirus pandemic has kept many businesses from operating, construction projects in the city haven't been significantly affected. Some work on the underground storage tunnel for the Spring/Fishburne drainage project was put on pause, but that has freed up construction workers for other areas.

Though five months in and much work still ahead, Fountain said the progress is slightly ahead of schedule.

One unanticipated concern was how the work would be received, since many residents have isolated at home the last few months and endured construction activities all day instead of just an hour or so when they get home from work.

Lindsey said people have been supportive, though.

Murray Boulevard residents said Thursday they were happy the work was being done, but two people said they experienced their homes shaking. One said it's been dusty and the parking took getting used to, but it'll be nice to look at the new wall and walkway when it is done.

Louise de Brux has lived in her Murray Boulevard home the last 41 years. The only time she's seen water in her home was during Hurricane Hugo, but the front yard has flooded a few times.

Susanne McLaughlin has lived in her home a few doors down for 42 years. She said it's been loud and her home shakes from time to time. Overall, though, she said she's happy the work is getting done now.

City Councilman Mike Seekings, who represents residents living in that area of the peninsula, said he's been monitoring progress and things seem to be going well.

Instead of tearing out the entirety of the wall from Tradd Street to Rutledge Boulevard, the city has decided to do the work in phases. Part of that is because of hurricane season, now only a few weeks away from it's official start. One hundred feet of the wall is removed and replaced at a time.

"When they cut a chunk out of the old wall it opens a risk for storm surge," Fountain said. "So we set up a temporary flood wall for the area they work. Then they'll come in and pour in the new concrete slabs."

The temporary walls put in place can withstand the same amount of water and pressure that the Low Battery wall can now, Fountain said.

As the old wall has been removed, Fountain said workers noticed that the materials used to build the wall changed, with fancier pavers and bricks near the Coast Guard station and more rugged materials as the wall stretches farther away.

Additionally, Fountain said that a $328,000 change order was made and is accounted for in the project's contingency budget. The change order is for spacing and alignment of pilings to support the wall, after crews found pilings in places they hadn't expected. Since the plans for the wall are over 100 years old, that was to be expected, though.

Since the project began, the U.S. Army Corps of Engineers released a report on how, with federal funding, it would combat hurricane storm surge with a wall surrounding the peninsula. The wall would be about 3 feet taller than the current Battery wall.

Work on the Low Battery from the Coast Guard Station to Rutledge Boulevard began in early December and is expected to be completed between Thanksgiving and Christmas this year, city officials have said. The work will be done in phases, with 1,000 feet of work done each year until it reaches the Battery.

The design also include slats for plexiglass to be installed during storms for added protection.

The project’s total cost is estimated at $64 million, with the city funding at least half of it. Currently, the city has $27 million set aside and would commit the next 10 years of the city’s accommodations tax and hospital fees to make up the difference.

For years, the city has put aside $2 million or $3 million in funding for the project. City Council also set aside another $5.2 million. A $32 million grant application to the State Infrastructure Bank is in the works.