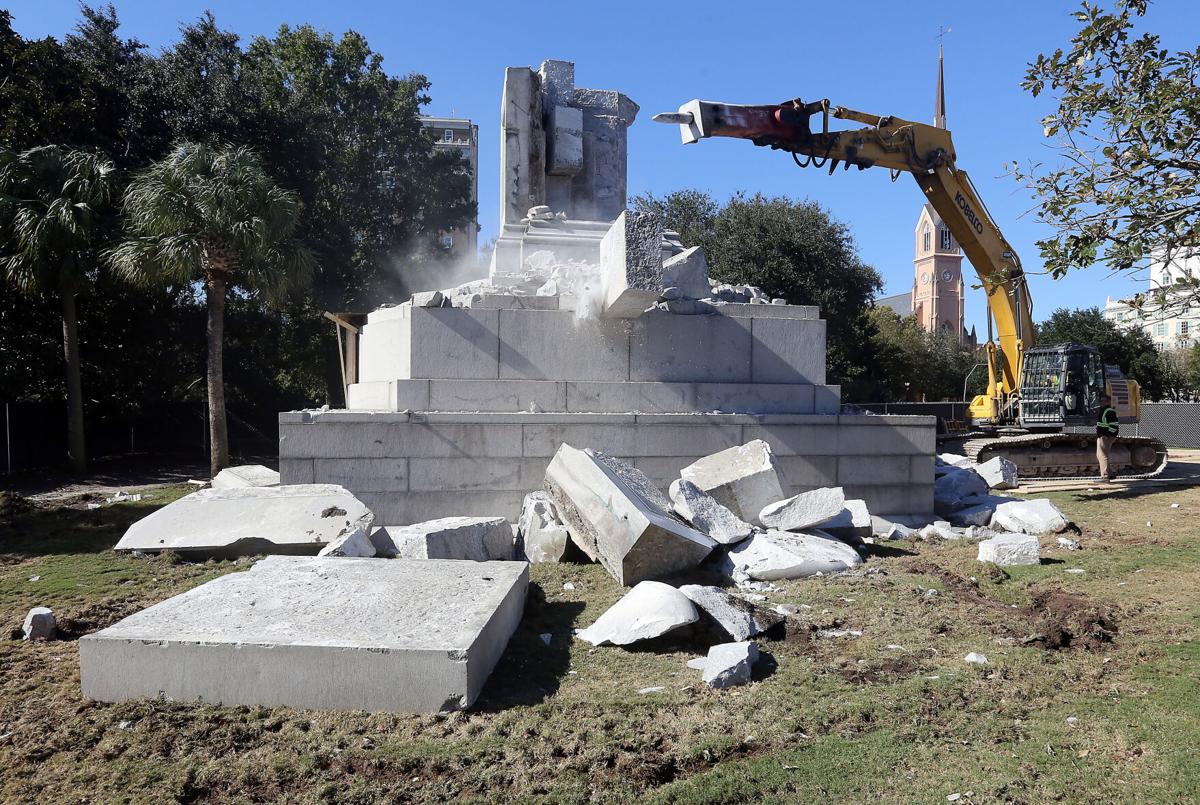 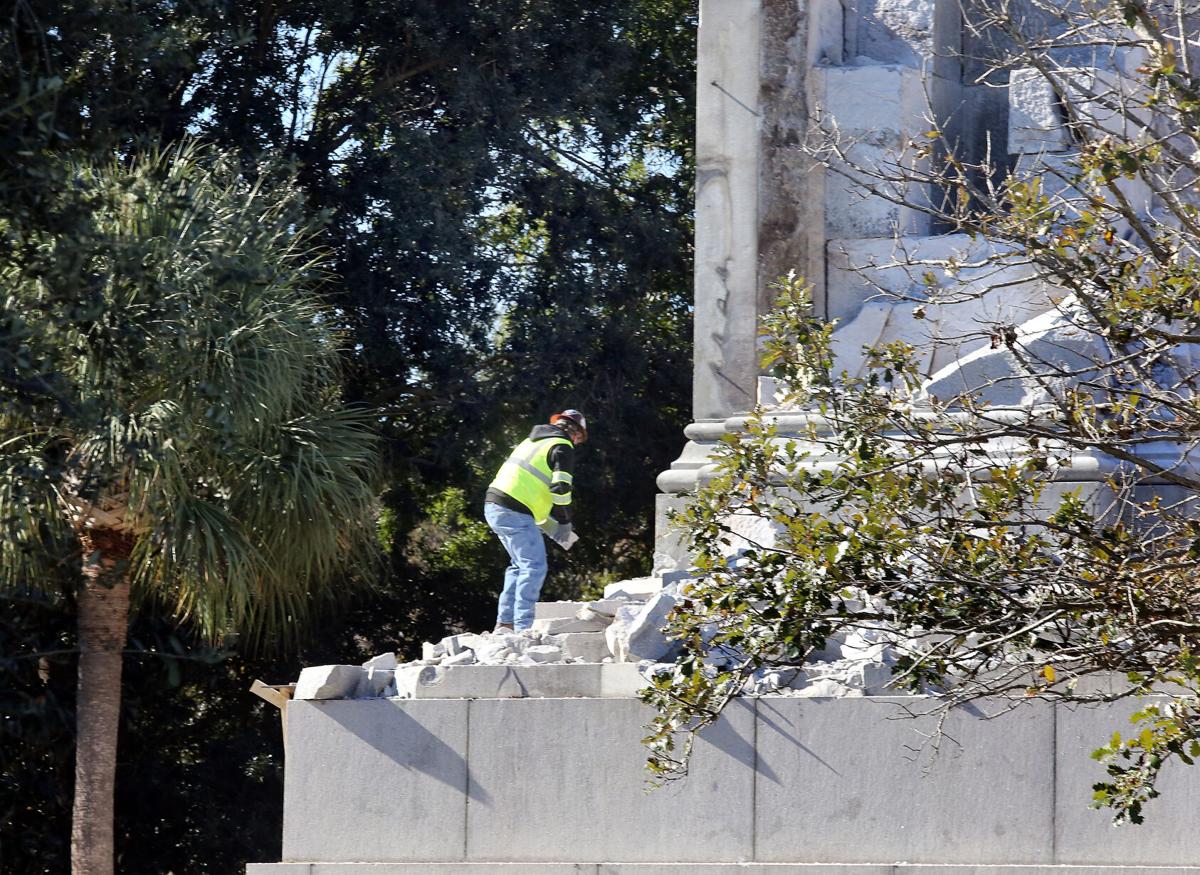 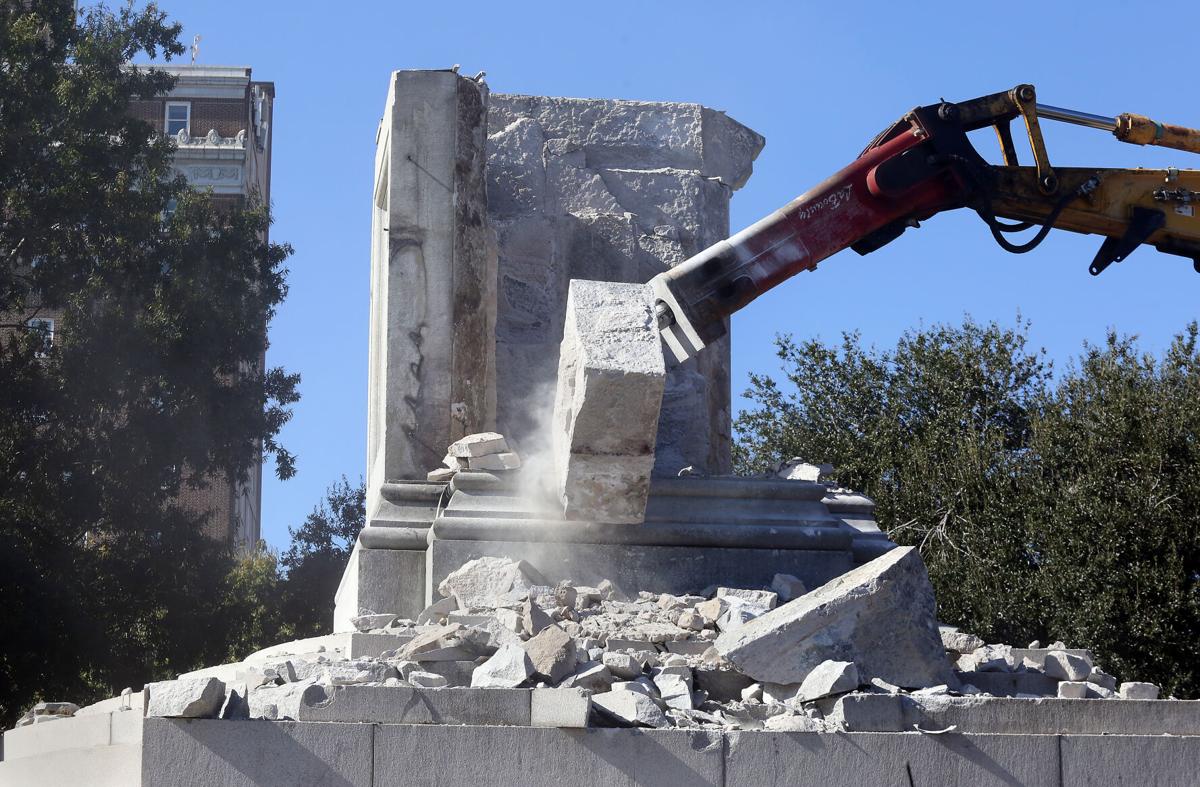 A demolition crew from North Charleston began a dayslong, meticulous removal of the John C. Calhoun monument's base Monday morning. Workers may also retrieve a time capsule hidden inside, if one exists.

An archeologist from Mount Pleasant-based Brockington & Associates is on standby to safely remove and analyze the time capsule, city Director of Parks and Capital Projects Jason Kronsberg said.

Few gathered to watch as the granite blocks were knocked down. Some people took photos, loudly muttered "About time" and continued their strolls. Dog walkers and families with little ones enjoyed the green space of Marion Square.

Kronsberg said it is believed that the time capsule is in the lower base structure, surrounded by granite blocks on the outside and bricks inside. It is likely the time capsule will be found Tuesday or Wednesday.

A Nov. 26, 1934, article in The News and Courier listed what may be inside the monument: a cannonball used in the battle of Fort Moultrie, a case and banner from Calhoun's funeral procession, $100, a lock of Calhoun's hair, Calhoun's last speech and lists of national and state officers.

Eric Poplin, a senior archaeologist and laboratory director at Brockington & Associates, said he'll likely be present when the demolition crew gets closer to the time capsule. He's unsure whether the capsule is an actual storage container or if the items were stored in a niche of the base itself.

Even with the possible lock of hair, paper material and textile banner, Poplin said it's not likely to disintegrate when exposed to the air — "It takes a bit more time to arrive at that condition."

Regardless, he or the laboratory supervisor on call will have cotton and leather gloves for handling the materials, he said.

Calhoun monument's base may hide a time capsule. Charleston wants to find and preserve it.

"In general, we would expect it all to be in relatively stable condition just given that it was likely sealed and hasn't been exposed," Poplin said.

While Brockington & Associates employees have done archaeological digs in the Southeast, the possible time capsule in Marion Square is new and a "pretty rare occurrence," Poplin said.

The city hired North Charleston-based Demolition Environmental Co. to raze the massive granite-and-concrete base at Marion Square, the last piece of the monthslong dismantling of the controversial statue.

Calhoun, a congressman and vice president who died years before Southern states launched the Confederacy, is remembered as a fierce defender of slavery and, to some, a representation of the city’s dark past as a hub of the slave trade.

On the fifth anniversary of the Emanuel AME Church shooting in mid-June, Mayor John Tecklenburg and nearly all City Council members announced plans for the statue’s removal. For weeks leading up to the announcement, protests and a riot flared in the city.

It took a crew 17 hours on June 23 to remove the 12-foot figure of Calhoun that stood atop a towering column over 100 feet in the air. The statue was affixed with epoxy and a metal pole to the base.

The statue is being stored by the city at an undisclosed location. Officials initially planned to have it displayed at a museum, but so far there have been no takers.

Just over a month after the statue was removed, a crew pulled down the massive granite column that perched Calhoun’s likeness 124 feet above the city. The column’s removal was delayed a day because of lightning strikes in the distance.