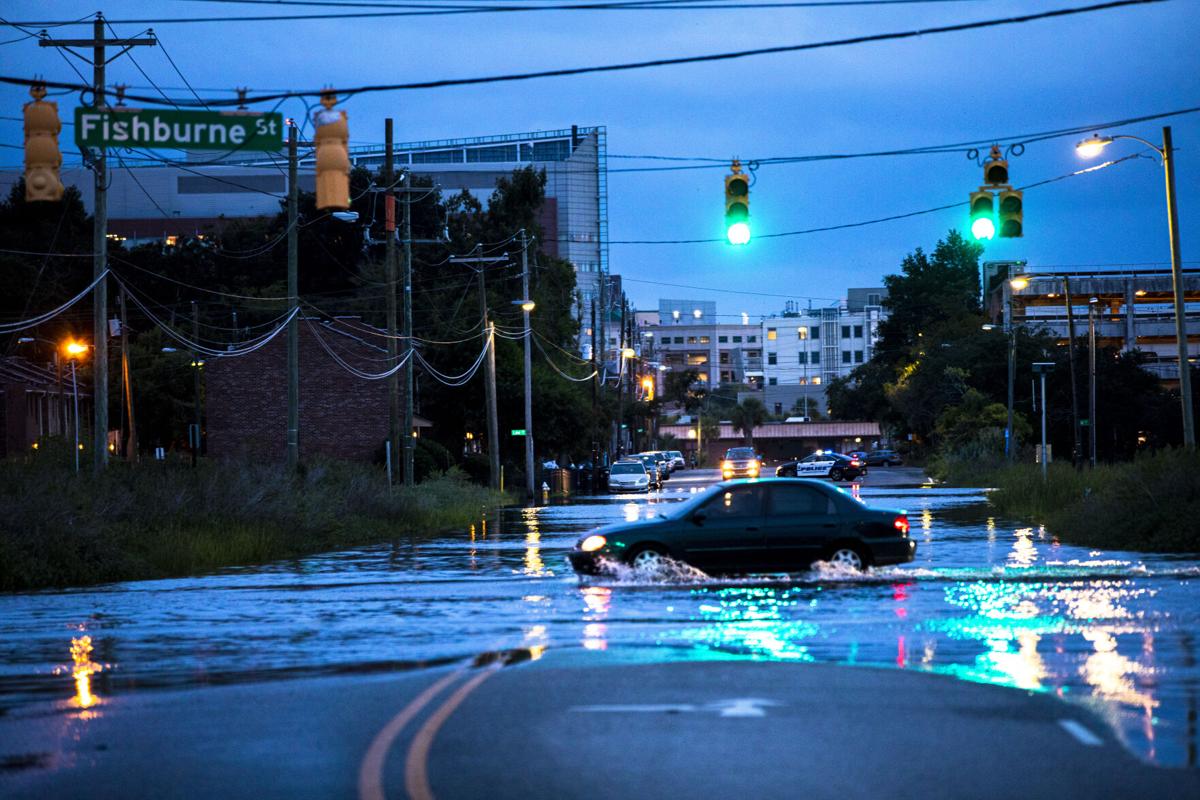 Flooding is seen along Hagood as tide levels in the Charleston Harbor have reached 8.06 feet on Tuesday, Sept. 15, 2020. Andrew J. Whitaker/Staff 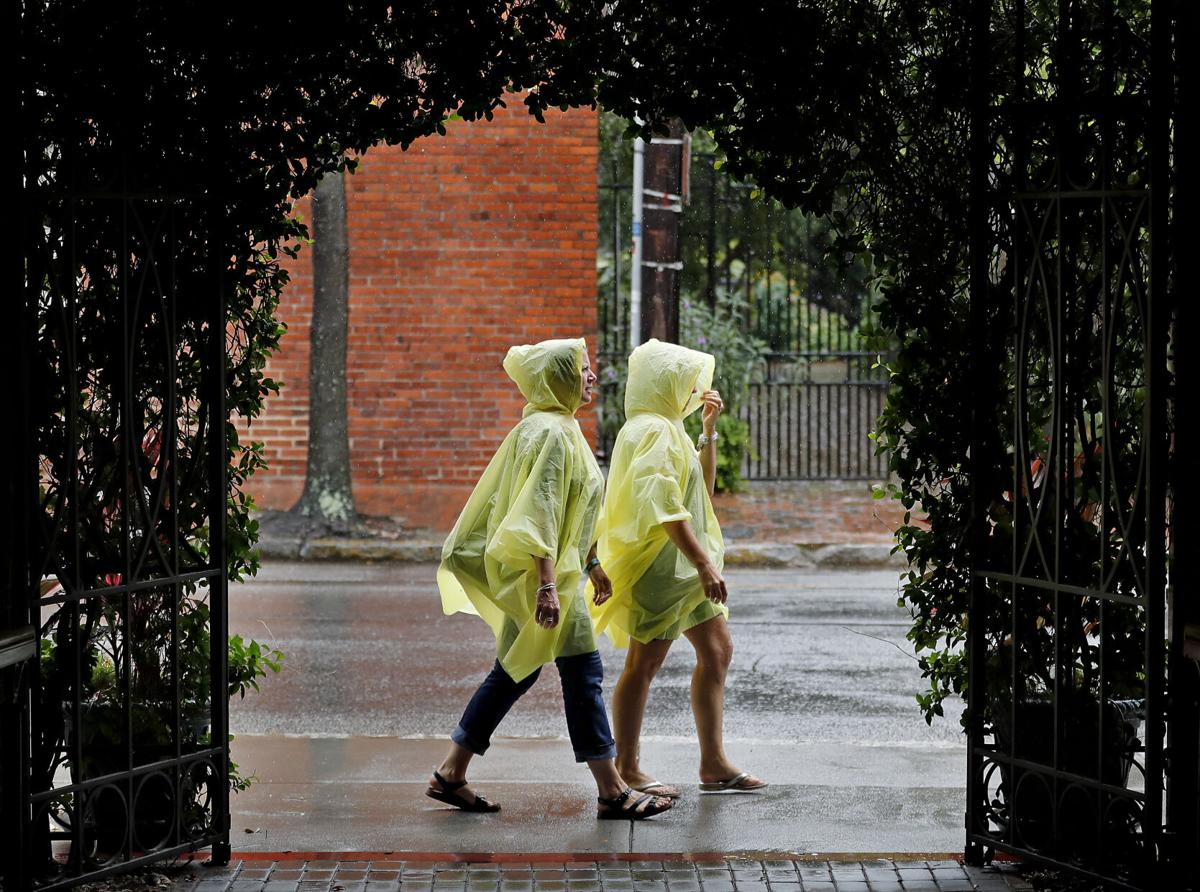 Pedestrians on Church Street cover up to protect from the rain near the City Market Wednesday, Sept. 16, 2020, in Charleston. Forecasts from the National Weather Service predict high tides and incoming rain on Thursday that could cause flooding. Grace Beahm Alford/Staff 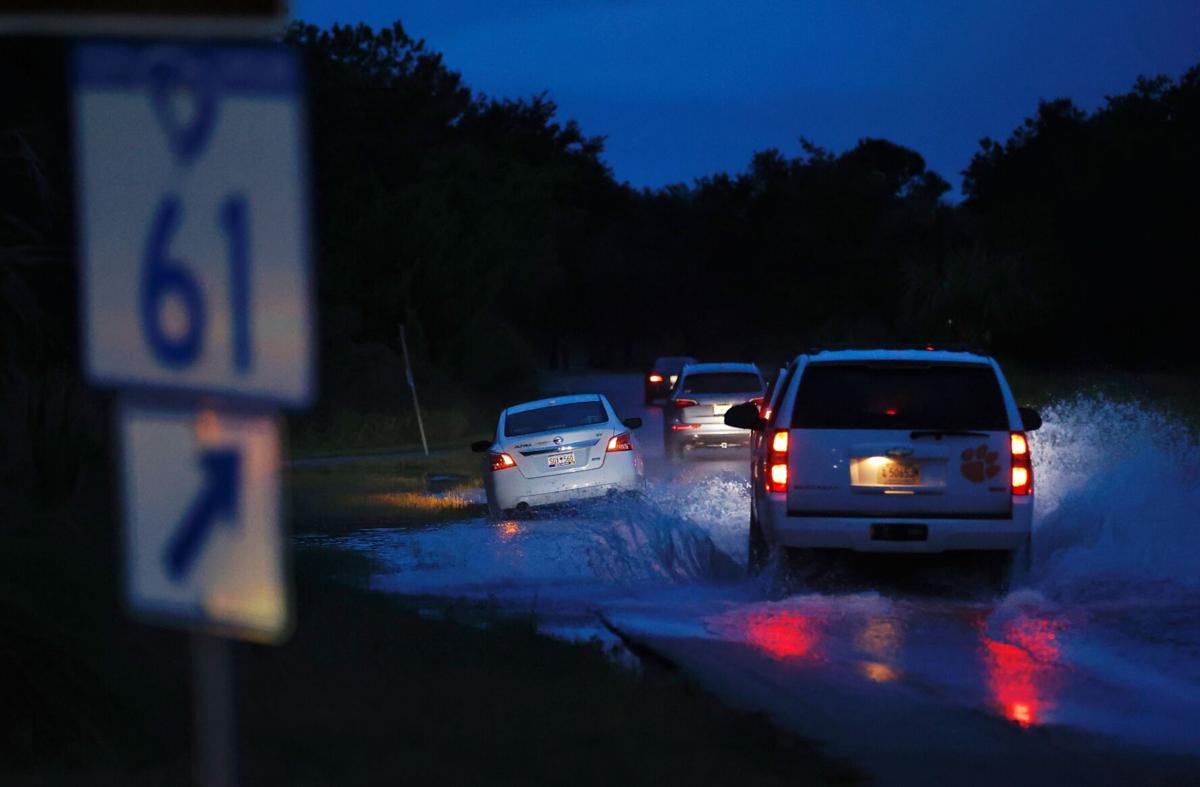 S.C. Highway 61 in West Ashley begins to flood during a king tide on the night of Wednesday, Sept. 16, 2020. Andrew J. Whitaker/Staff

Flooding is seen along Hagood as tide levels in the Charleston Harbor have reached 8.06 feet on Tuesday, Sept. 15, 2020. Andrew J. Whitaker/Staff

Pedestrians on Church Street cover up to protect from the rain near the City Market Wednesday, Sept. 16, 2020, in Charleston. Forecasts from the National Weather Service predict high tides and incoming rain on Thursday that could cause flooding. Grace Beahm Alford/Staff

Shortly before 8 p.m. a National Weather Service gauge in Charleston Harbor registered 7.91 feet, putting the level on the high end of the moderate flood stage. Major flooding occurs at 8 feet and above.

Earlier Wednesday forecasters said "the condition will be exacerbated" if rain arrives around high tide, but the downpour stopped shortly before 7 p.m.

Although the nighttime high tide caused localized flooding, no major issues were reported.

Charleston police monitored standing water along several roadways Wednesday night and announced some road closures, but the high tide did not appear to cause widespread flooding.

Jonathan Lamb, a meteorologist with the Weather Service in Charleston, said some rain would arrive but there weren't "strong indications of a particularly widespread heavy rainfall." The Lowcountry sees some of its worst flooding events when rain is stopped from draining by an elevated tide.

The astronomical cycle of a new moon on Thursday and a moon in perigee (or at its closest point to Earth) on Friday is pushing water levels in Charleston Harbor higher. It's common for these "king tides" to arrive in the Southeast in autumn because of the lunar cycle.

Already, Charleston saw a tide at 8.06 feet on Tuesday night, the first time this year that the tidal gauge in Charleston Harbor has reached major flooding category. Water inundated low-lying areas downtown like Lockwood Drive, and crept onto the backside of the Isle of Palms, covering roadways there. But the peak tide arrived around 7:30, missing the evening commute.

Lamb said weather watchers sent in relatively few reports on Tuesday night, but that may have been because it was becoming dark when the worst of the tidal inundation hit.

On Thursday, rains from Hurricane Sally will arrive across the area, dropping an estimated one to two inches of rain through the evening. The slow-moving storm was poised to cause catastrophic rainfall flooding for the Gulf coasts of Mississippi, Alabama and Florida, according to the National Hurricane Center.

It will be moving faster, with less time to dump water, as a tropical depression by the time it crosses the Palmetto State. Sally could still make a mess around Thursday's larger high tide, however, forecast at 7.7 feet around 9 p.m.

Taylor said he and his colleagues will be watching Sally's remnants as they move over the area.

They expect the system to bring rain and a possible tornado risk before it moves out of the region by Friday morning, he said.

A cold front is expected to push through the area following Sally, Taylor said. Conditions will be cooler but there is a chance for some rain along the coast as well as rip currents.

As of Wednesday night, the forecast call for showers on Thursday and a chance of showers through Sunday, according to the Weather Service. The high Thursday will be 84 degrees and the low, 75.

Conditions will cool over the weekend with highs in the mid-70s and lows in the low 60s, according to the Weather Service.