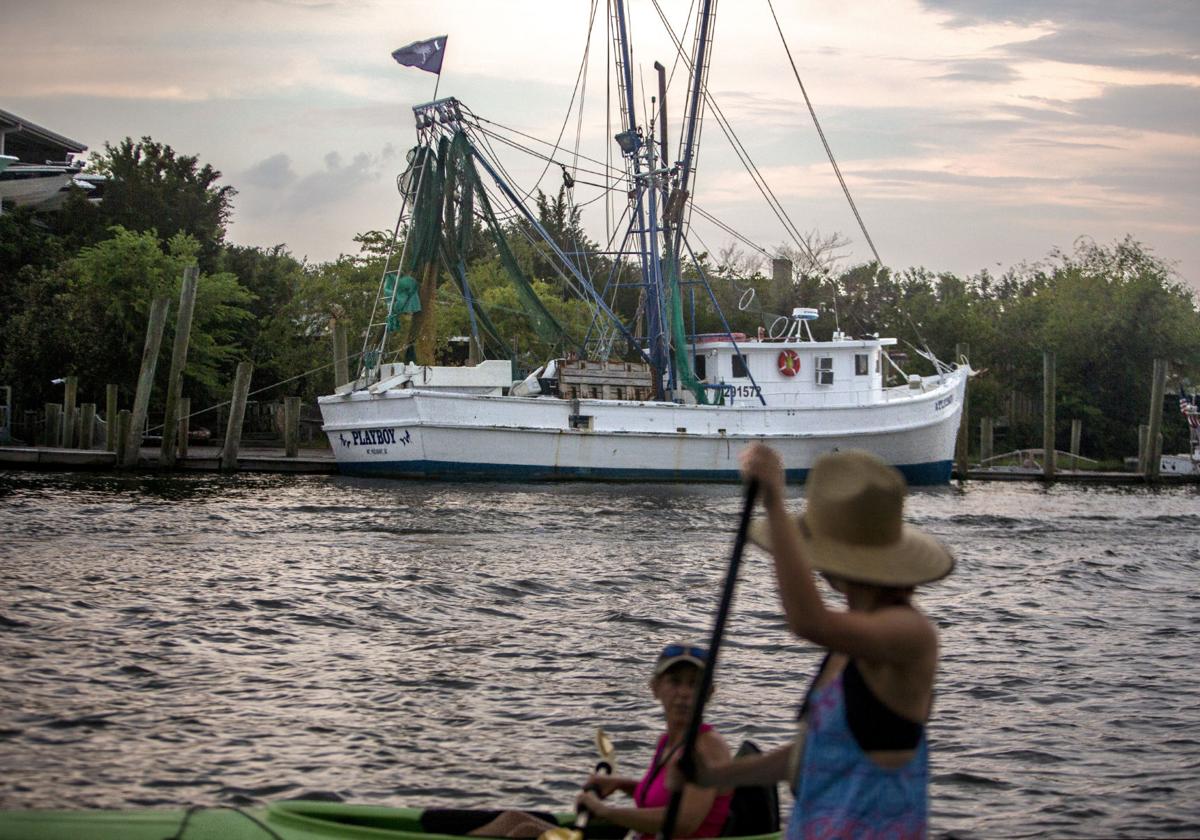 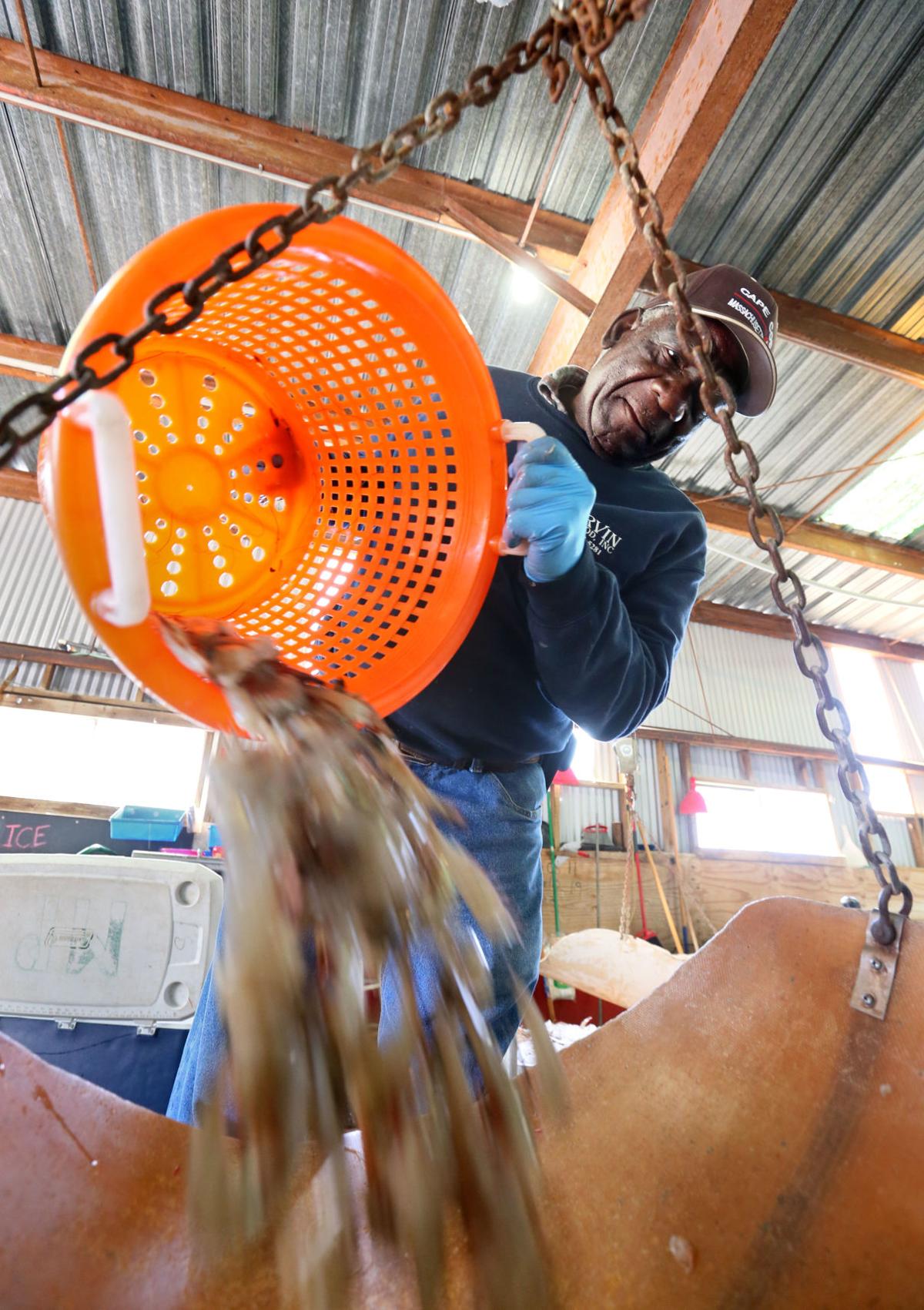 On Friday, March 22, 2019, former shrimper John Henry Middleton weighs a batch of just-headed shrimp for freezing at Tarvin Seafood at the Wando Dock. Middleton has worked on — or out of — Shem Creek for more than 30 years. Wade Spees/Staff 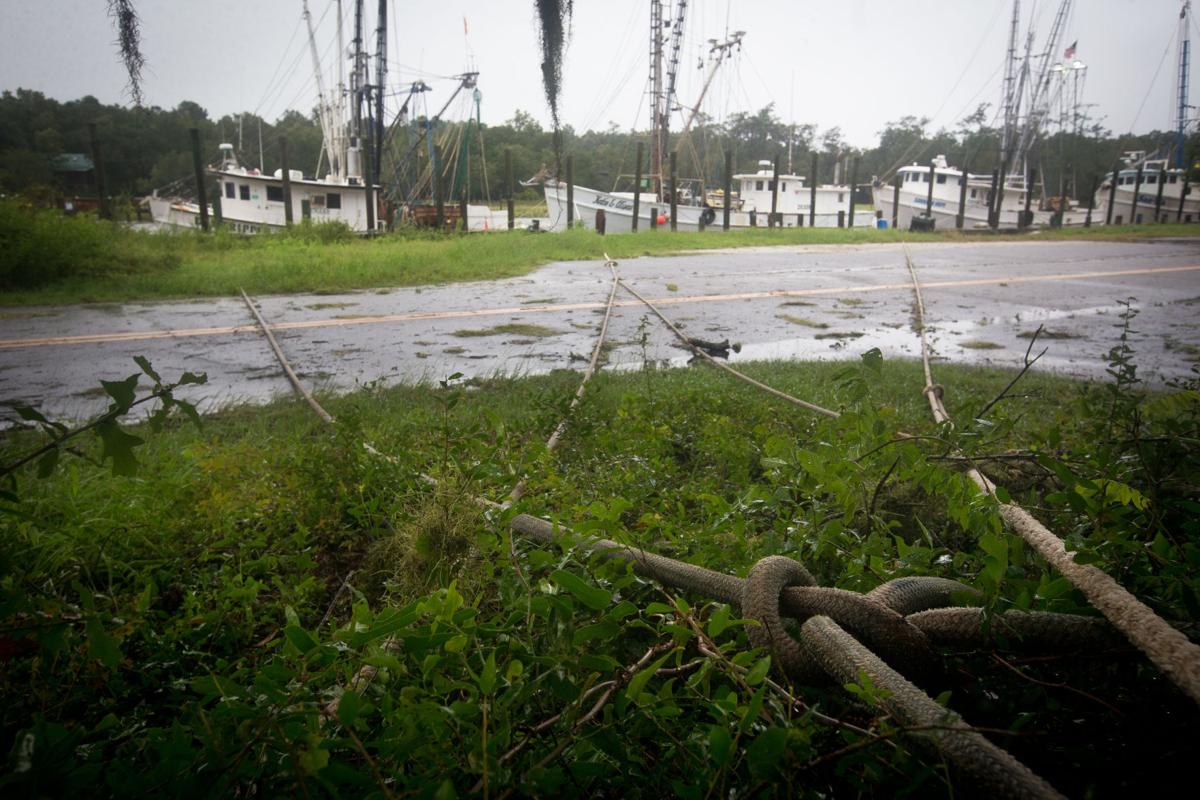 Several shrimp boats are tied up in preparation as Hurricane Dorian heads north along the coast of South Carolina on Thursday, Sept. 5, 2019 in McClellanville. Andrew Whitaker/Staff

Back in the spring, this year looked like it was shaping up as a bountiful one for shrimp. The catch came in plentiful and plenty big enough.

Before the fall catch, though, something changed in the waters around Charleston.

"We've had very little shrimp. It's been terrible, terrible," said Tommy Edwards, who runs a commercial boat from Shem Creek in Mount Pleasant. The weird thing is nobody seems to have a good reason why.

For the consumer, the bad year really didn't have much effect as far as price or availability.

North Carolina shrimpers had that bounty catch, and the catch improved the farther south shrimpers worked. The bigger boats went north or south. A lot of retailers went north on the highway to bring back some of that catch.

Shrimp season to open next week in outer SC waters

For the local shrimpers with smaller boats, though, 2019 is another bad year in a run that's crippling the fleet.

"It just has not happened from Georgetown down to about Beaufort," said Rutledge Leland, who owns Carolina Seafood where many of the McClellanville shrimpers dock. "A few weeks of steady would be nice right now."

A fierce cold snap of snow and ice in January 2018 made for the fifth worst die-off of shrimp and other species since the 1950s. A late spring start last year was followed by a poor summer. A good fall catch barely made up for that, according to officials and shrimpers.

The catch here is prized for its taste and texture, but it's not enough and too inconsistent to compete with Gulf of Mexico shrimp in the national retail market, much less the glutted, farm-raised import market. South Carolina shrimpers make most of their living selling fresh off the boat.

Edwards is hoping for a late run of shrimp to salvage his year. The fall season tends to run into the early winter.

The ones bred this summer just never seemed to come out of the creeks where they grow, for whatever reason. But the shrimp appear to be moving now.

"The harbor is full of shrimp," Edwards said.

The S.C. Department of Natural Resources had no immediate explanation for what happened to this year's fall crop.

The heart of the catch tends to come in the nearshore waters within 3 miles of the coast. Guesses among shrimpers about what happened vary from persistent offshore winds and recurrent higher than normal tides keeping too many shrimp inshore to Charleston shipping channel dredging disrupting the main channel out for the shrimp.

But the dredging didn't disrupt the spring catch and wouldn't explain why the shrimping was poor as far north of Georgetown, where shrimp spawn up different rivers.

The only thing that seems to be ruled out is black gill disease.

The disease kills shrimp. It's harmless to people who eat the infected catch, but it's unsightly enough to make the meat less appealing.

Researchers at the University of Georgia Skidaway Institute of Oceanography believe the rise of black gill in Georgia shrimp in recent decades may be linked to climate change, specifically to the region's warmer winters.

But both Leland and Edwards said they haven't seen much of the disease this year.

Research also indicates that warmer water is driving the catch farther north, which might explain North Carolina's good catch. But experts feel it's too soon for too say for sure.

Whatever happened, Edwards hasn't been to pull in more than much more 800 pounds of fall catch in total so far. On a good year, that's a day's catch.

After yet another unsuccessful day of trawling recently, he said simply, "I'm out of fuel and out of patience."