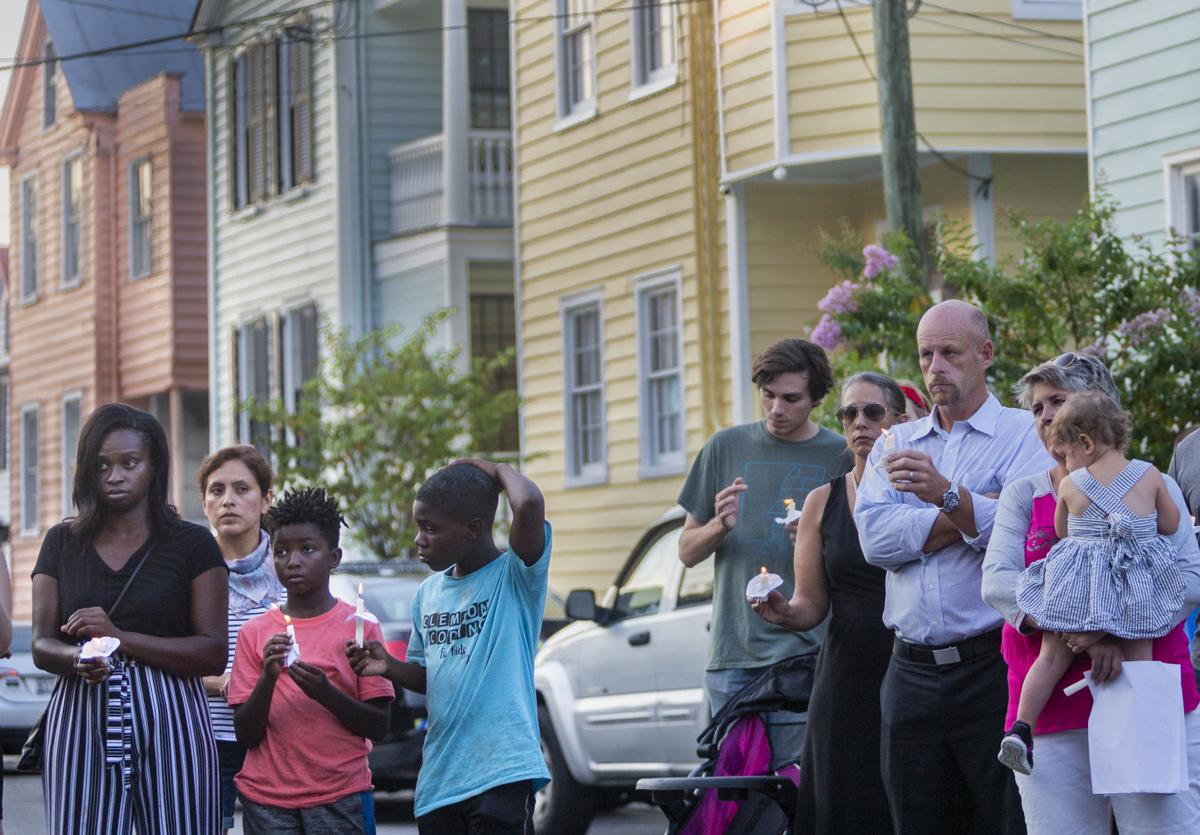 Neighbors, friends and members of the community gather for a vigil following a fatal shooting in August on Charleston's East Side. File/Gavin McIntyre/Staff 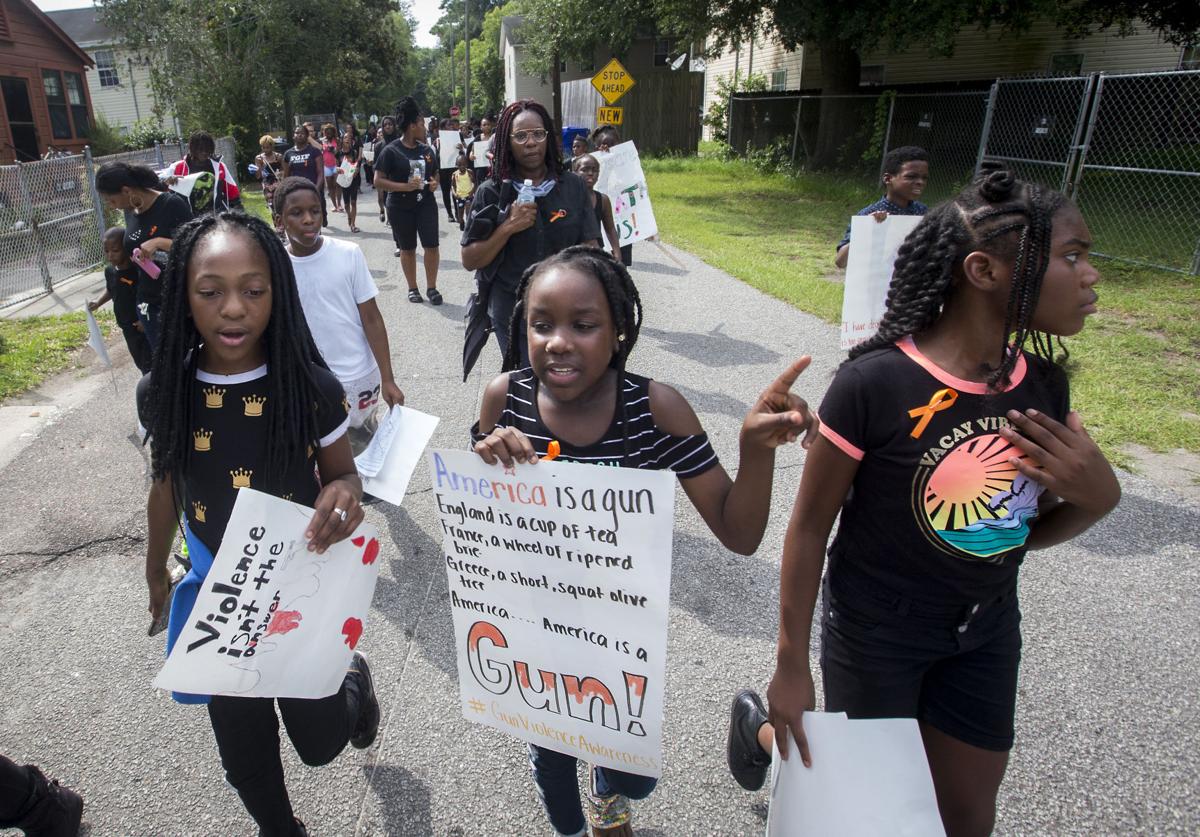 Just weeks after the school year started, Sanders-Clyde Elementary was placed on lockdown as authorities investigated a homicide near the school, said Principal Janice Malone.

“Our children, they have stories that they tell us all the time about hearing gunshots or wanting to move because of the violence that they see on a regular basis,” Malone said. “It's traumatizing because a lot of times we don't think that the children are listening or that they're being affected, and they are.”

Sanders-Clyde is nestled in the heart of Charleston’s East Side — a neighborhood that saw four fatal shootings between mid-June and late September.

In one of those homicides, Malone said, a body was found just a few hundred feet from the school. Community members created a memorial in the brush just outside the school’s gate on Harris Street. The victim was the father of a second-grade student at Sanders-Clyde, she said.

Charleston's East Side continues to struggle with violence fueled by outsiders

Pervasive community violence is an unfortunate reality for some students in Charleston County's public school system, and the consequences are broad and far-reaching — especially for some young, impressionable students who face it every day.

Community violence can be traumatizing for students.

But some schools are actively working to better help students exposed to violence and trauma through more mental health resources, wraparound services and educator training on how to better recognize and identify traumatized students.

The East Side isn’t the only area where Charleston County students are often exposed to violence.

Ruth Taylor, principal of Mary Ford Elementary in North Charleston, recalled how gunshots rang out through the neighborhood while the school hosted an outdoor family event in October.

“Our families were safe, but we were outside. So it’s real for our families,” Taylor said. “They were all disappointed. They said, ‘We wish we didn't have to go through this all the time.’”

Elvin Speights, a North Charleston parent and community leader, worried about the students he says face violence in their communities every single day.

“They’re at 8 and 9 years old already facing the challenges of the world,” he said.

Trauma impacts students in many different ways, said Patrice Penney, a social worker and clinical professor at the University of South Carolina.

Difficulty maintaining and forming relationships, problems managing emotions, having a cynical attitude and difficulty focusing are all possible ways trauma can manifest, she said.

"Especially for children and adolescents, (trauma) really has an impact on their brains, on their bodies, on their behaviors, on their relationships across development," Penney said.

Trauma also impacts students' ability to form important cognitive skills such as organizing, planning for the future or using past experiences and memories to guide decision-making.

"All of those things are impaired, not because they're not smart or not capable, but because their brains and bodies have been surviving, not thriving," Penney said.

Kristi Johnson works as a social worker within a handful of schools in North Charleston and sees firsthand how violence and trauma impacts students.

Students exposed to violence sometimes have trouble managing their emotions or experience angry outbursts, she said. Sometimes, students may act out the same way they’ve seen in their environment — with their fists.

But violence and trauma also impact students in other ways that are sometimes more difficult to identify, such as anxiety, depression or withdrawal.

“I feel like a lot of our students sometimes get overlooked when they internalize things that are going on with them,” Johnson said. “So we may just see a child that is anxious but not really, truly understand what that's about.”

Learning 'not the first thing on their mind'

Some types of chronic stress are also traumatizing for students. Living in poverty or not knowing when they’ll be able to eat next can have a significant impact on students’ behavior and performance in the classroom.

This type of trauma is different, but not any less significant than trauma associated with violence, said Lisa Allison, the district’s director of intervention and psychological services.

“Anytime we have students who are stressed or anxious or worried, that takes their minds off of being able to engage in their schooling,” Allison said. “We have to acknowledge it, be aware of it, and then create an environment that's safe and supportive and engaging, and helping them when we can with those basic needs.”

North Charleston homicide rate up 31% from last year. Here's how police plan to lower that.

This is especially common for students in some North Charleston neighborhoods, Speights said.

Low-paying jobs, gentrification and the rising cost of rent has caused many North Charleston families who can’t afford to keep their houses to move into budget hotels, he said.

Houses in one North Charleston subdivision once cost around $500 to $600 a month to rent, Speights said. Now, renting those same houses costs between $1,100 to $1,200 a month, but the minimum wage has stayed the same.

“A lot of these kids come out of a hotel every morning. A lot of times these kids, the only time they eat is at school,” he said. “For a child to have to live with something like that — when they get to school, learning is not the first thing on their mind.”

When students can't get enough to eat at home, schools in high-poverty areas often step in to help via community partnerships or programs like BackPack Buddies, where students get a backpack of nutritious food to take home with them over the weekend.

“We feed them, we clothe them, we talk to them. And I tell teachers at the same time, ‘We have to hold them to high expectations for learning.’ Because we know that quality education, that's the hope that they need to break the cycle of poverty,” Malone said.

Allison and other educators used this data to apply for a $5 million federal mental health grant designed to help students who are exposed to pervasive violence. Charleston was one of 15 school districts selected, and the district will receive around $1 million a year for the next five years from the U.S. Department of Education.

The grant will fund more mental health counselors in schools and school climate coaches. Some flexible funding will also be set aside for optional contract services, such as drug and alcohol counseling.

Allison and her team are meeting with the schools identified in the federal grant this month and hope to have some new resources in place by January.

The district will also set aside some of the grant funding for what's known as "trauma informed" teacher training, Allison said.

This type of training is immensely helpful, Penney said, as it helps teachers and educators understand why some students that have been exposed to violence or trauma behave the way they do. This understanding can stop the cycle where the same students are repeatedly punished for bad behavior, Penney said.

Students' behavior may be bad, Penney said. It may be aggressive or frightening. But educators should be trained on how to look for signs about what might be happening at a student's home or in their community that prompt those behaviors.

All but one of the North Charleston schools identified in the grant have higher out-of-school suspension rates than the district’s average. Morningside Middle, Northwoods Middle and North Charleston High all have rates of 40 percent or higher, according to data compiled by the S.C. Department of Education.

Allison said she hopes the extra mental health supports and teacher training the grant will fund will both help reduce students' negative behaviors and the discipline consequences associated with them.

"That's what we're trying to help break that cycle," she said.