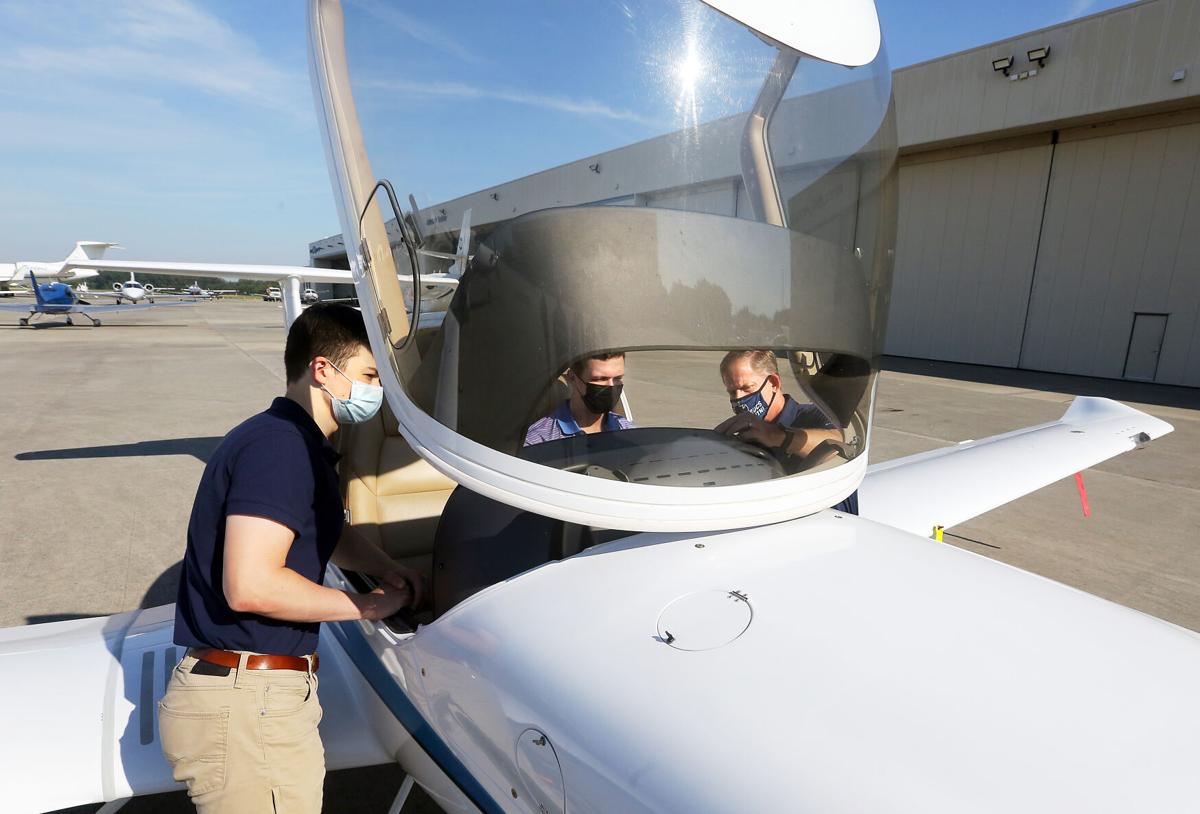 Christopher Will (right), Chair of the Charleston Southern’s aeronautics department, explains the different functions on a control panel of a Diamond DA-40 plane to students Dillon Bott (center) and Jackson Gilbert during his introductory aeronautics class Thursday, October 8, 2020. The formal launch of the new aeronautics program at CSU is next year. 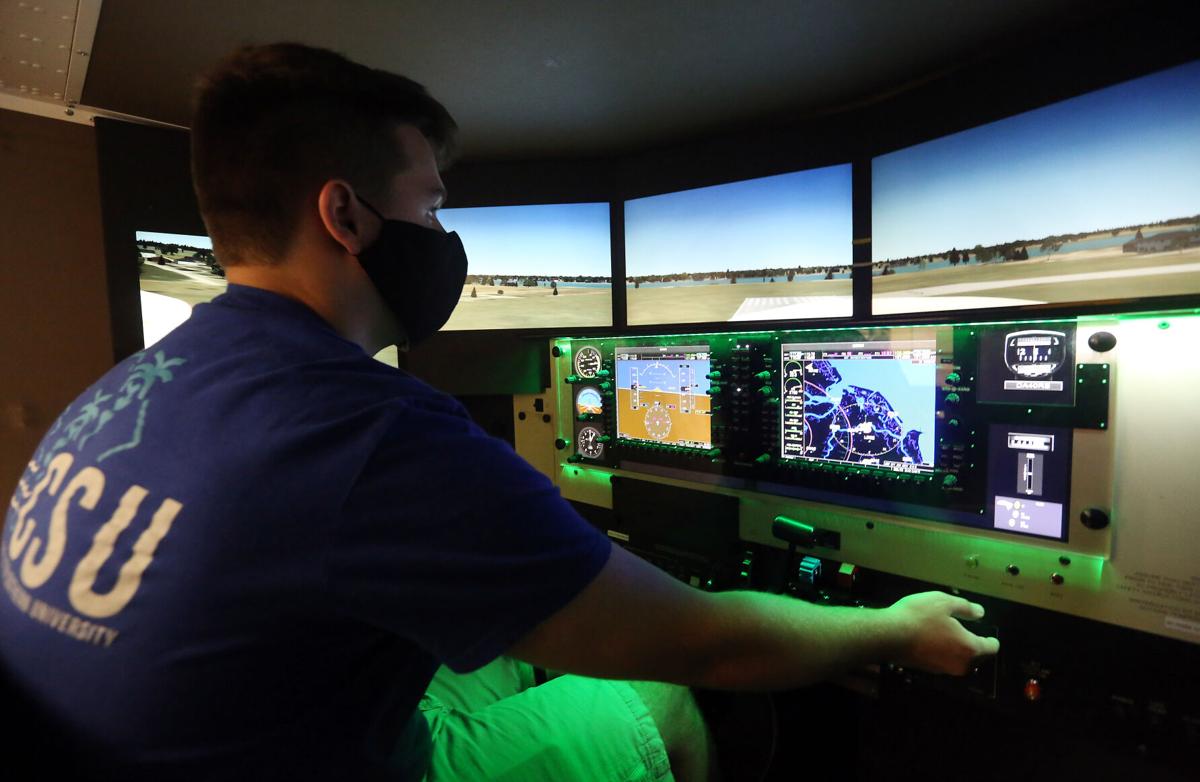 Charleston Southern student Harrison Hunt works in a simulator as part of Christopher Will’s introductory aeronautics class this semester. The formal launch of the new aeronautic program at CSU is next year. 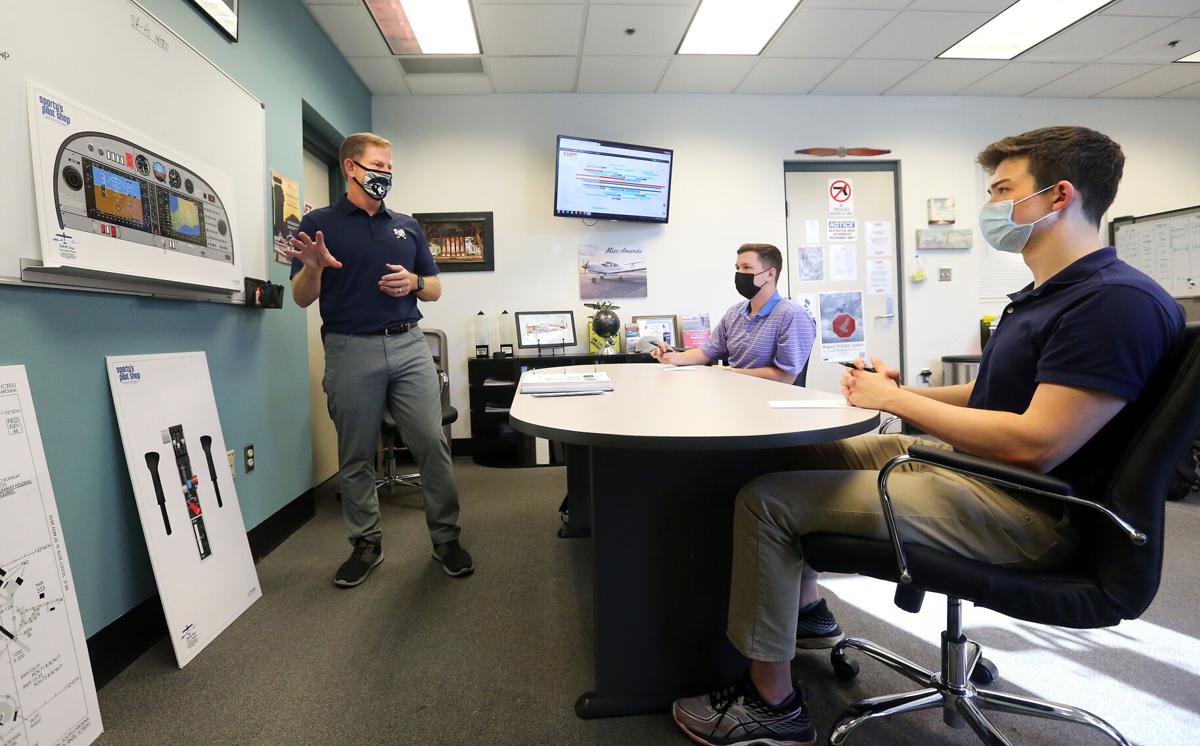 Christopher Will (left), Chair of the Charleston Southern’s aeronautics department, explains different functions of a control panel on planes to students Dillon Bott (center) and Jackson Gilbert during his introductory aeronautics class Thursday, October 8, 2020. The formal launch of the new aeronautics program at CSU is next year. 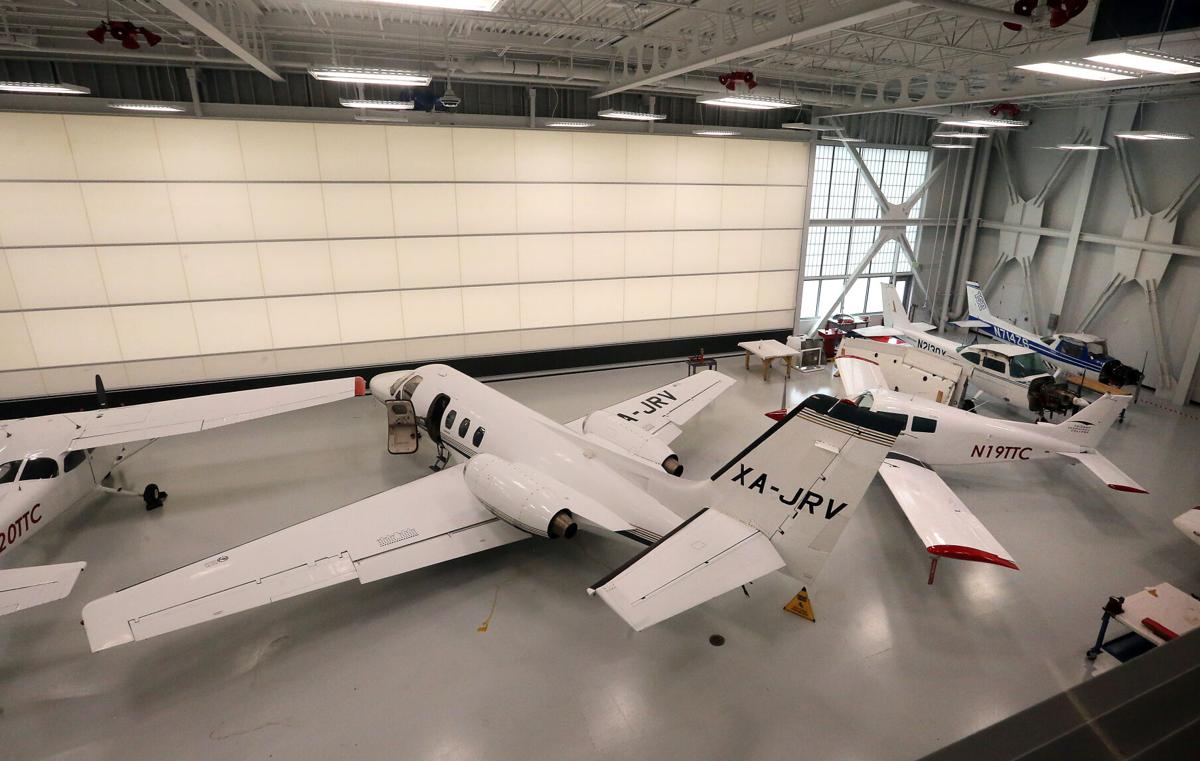 Trident Tech’s Aeronautic Training facility has several types of planes that students in the Aeronautic Studies program use to train on. 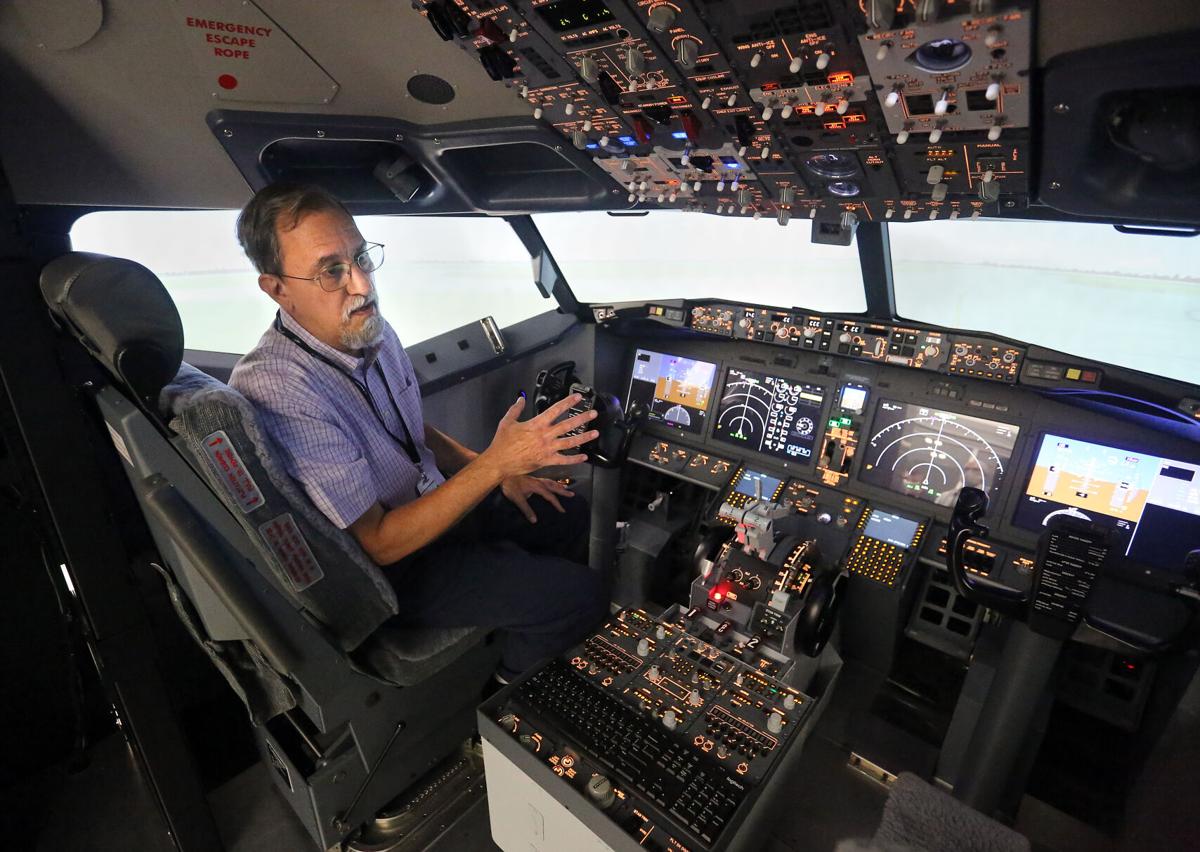 Barry Franco, Dean of Trident Tech’s aeronautic studies, explains how he and instructors can go into a Boeing 737 simulator and create avionics failures that students will have to diagnose and fix.

South Carolina needs trained pilots and aviation experts. But in recent years, the demand for these skilled workers has far exceeded the available supply.

A new program at Charleston Southern University hopes to change that.

The private school in North Charleston will launch the Palmetto State’s only four-year collegiate aeronautics degree next fall.

While other schools in the state offer flight training, CSU’s new program will be the only place where students can study to receive their pilot’s license while simultaneously completing a Bachelor of Science in aeronautics.

The University of South Carolina only offers a bachelor’s degree in aerospace engineering. Trident Technical College’s new S.C. Aeronautical Training Center teaches its students how to manufacture, repair and maintain airplanes, but not how to fly them.

With an estimated shortage of 804,000 civil aviation pilots in the next 20 years, according to a Boeing Co. market forecast, Charleston Southern’s new program aims to create a pilot pipeline that will help bridge the gap and fill a global demand.

The COVID-19 pandemic has sent the airline industry into a tailspin, resulting in massive budget cuts and employee furloughs. Experts fear that when the industry eventually rebounds, the burden of the pilot shortage will only be more extreme, fueled by an aging workforce and early retirement buyouts.

“One of the great needs — not just nationally, but internationally — is pilots,” said CSU President Dondi Costin. “We can educate and equip and train young men and women here to literally change the word by the vehicle of aviation.”

Before coming to Charleston Southern as president in 2018, Costin worked at the Department of Defense in Washington, D.C., where he served as the chief of chaplains.

During his time at the Pentagon, Costin saw firsthand how the severe shortage of pilots had impacted the Air Force.

“When I got to CSU, I had a looming interest already in seeing what we could do as a university to help bridge the pilot shortage gap,” he said.

The Pentagon is also where Costin met Christopher “C.J.” Will, a retired Air Force colonel and founding chair of CSU’s new Aeronautics Department.

Students enrolled in the new program next fall will be able to choose between three main tracks: commercial, military or missionary aviation.

Their coursework will include aerodynamics, meteorology, aircraft safety and operations. By the end of the four-year program, students will also have the opportunity to earn essential Federal Aviation Association licenses and certifications.

The college will partner with Charleston Regional Accelerated Flight Training, also known as CRAFT, where students will complete all of their flight time out of either the Summerville or Charleston International airports using a fleet of Diamond aircraft.

Students' so-called ground instruction that will take place at CSU is covered by their regular tuition cost. They'll need to pay extra to log their flight hours.

While the funding hasn't been finalized, Will expects students to pay "at or slightly less than the average collegiate aviation program."

The average cost to obtain a private pilot license is around $12,000 to $15,000 if you go to a training program or flight school, Will said.

A decade after landing in North Charleston, Boeing SC remains on sharp trajectory

Students who do invest the time and money are expected to see a significant benefit in the long run, Will said.

According to a study conducted by the federal Government Accountability Office, students who study aeronautics and flight training in college experience a higher return on investment than those who study to become doctors or lawyers, Will said.

Reaching for the sky

A small, Southern Baptist affiliated private school might not seem like the obvious choice for the site of the state's only aeronautics program, but the new degree is consistent with the university's shift into the technical arena.

Charleston's status as one of the biggest aviation hubs in the Southeast also helped guide the college's decision.

"This sort of perfect storm, in the best sense of the phrase, really makes Charleston Southern the perfect place for it," Costin said.

But in order to successfully fly an airplane, there also must be people to maintain and repair it.

SC's new aeronautical center a place to train and inspire

"The pilot shortage may be getting a lot of press, but there’s a shortage of licensed mechanics as well," she said. "It really is an entire industry that really needs some pretty substantial help in producing a trained workforce."

Before the pandemic hit, the shortage of trained mechanics was so severe that several major airlines went out of their way to establish partnerships with maintenance schools across the country, said Barry Franco, Trident's dean of aeronautical studies.

It's always a challenge to recruit recent high school grads into tech-heavy or engineering fields, Almquist said, likely because many of them haven't been exposed to these experiences during their K-12 education.

"They try their best to expose students to things ... but their funding is so limited that it’s very difficult for them to take an individual student and show them a technical discipline that’s really going to light them on fire," she said.

Several groups throughout the Charleston area have attempted to help address this by ensuring outreach to students happens early on.

This is especially important for low-income students and students of color who otherwise might not ever have these opportunities, Will said. These are the same groups that have been historically underrepresented in aviation careers.

"The airplane does not care where you're from, what color your skin is, what god you pray to, what language you speak," he said. "Anyone, if given the opportunity, can become a pilot."

Fostering these opportunities is the core mission of the Lowcountry Aviation Association, a nonprofit that regularly invites middle and high school students to go up in an airplane and receive their first flight lesson.

"To see the effect that it has on these kids, that's what's most powerful to me," Will said.

Charleston Southern plans to send out its official application for accreditation sometime in the next month. The class of new students starts in August.