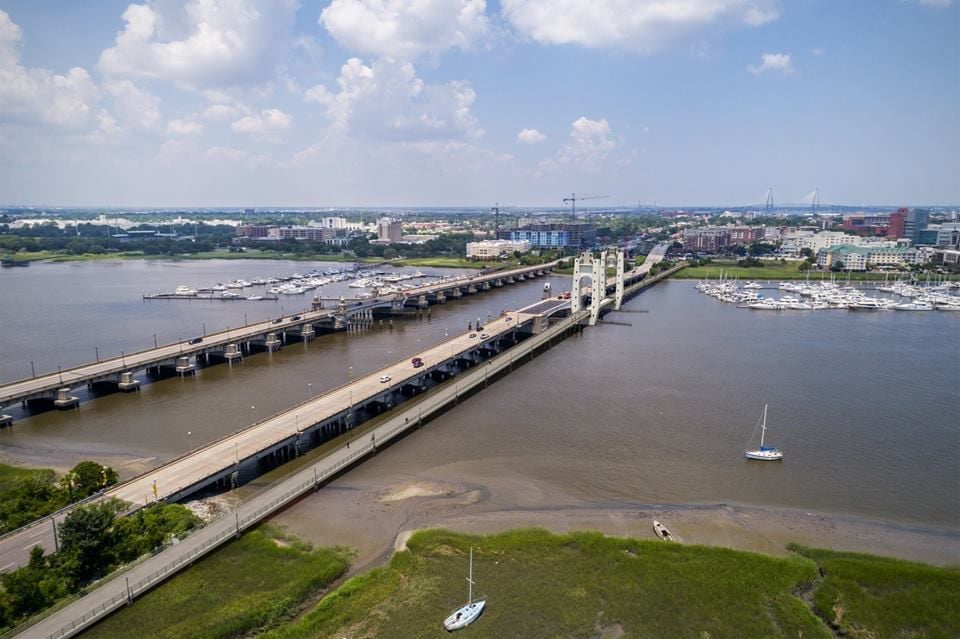 A rendering of the proposed nonmotorized transportation bridge across the Ashley River between West Ashley and the Charleston peninsula. City of Charleston/Provided. 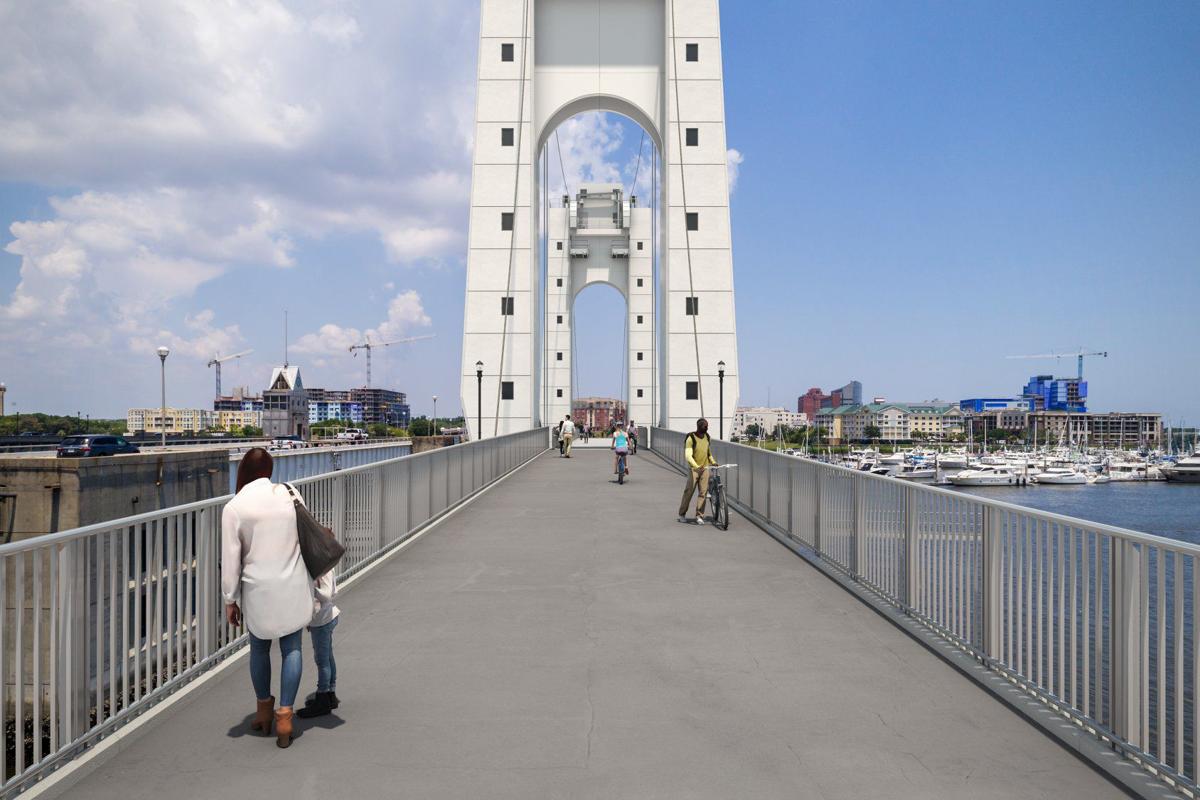 This rendering, including in Charleston's application for a federal grant, shows what a new bike-pedestrian bridge over the Ashley River might look like. Provided

Progress on the future bike and pedestrian bridge linking West Ashley to downtown across the Ashley River hit a milestone this week when Charleston City Council approved a $2 million contract with a Nebraska-based engineering firm to start design work.

The contract signed with HDR lays out a timeline so proposals for completed design and construction of the 0.4-mile-long standalone bridge can be solicited by Aug. 1, 2021.

Last year, the U.S. Department of Transportation awarded Charleston an $18.1 million grant for the bridge. The city's grant application set a completion date of 2023.

"In a nutshell, it means this is really happening," Tecklenburg said. "It really gets the ball rolling on the design and permitting of the project and keeps us on track for the federal grant. It's a big deal."

Over the course of the next year, HDR will do aerial mapping, traffic studies, environmental studies and create a structural design, according to the contract.

Edmund Most, the city's deputy director of capital projects, said a more detailed schedule is being finalized and HDR would have a substantial update at the earliest in mid-December but more likely mid-January.

City Councilman Ross Appel, who represents residents just over the Ashley River, said the bridge is an important project for the city but especially for his constituents. He called it a "top priority."

West Ashley resident Susan Pearlstine grew up in the South Windermere neighborhood just south of the West Ashley Greenway. She remembers riding her bike across the Ashley River bridge safely — before Charleston's population explosion — but it isn't even a thought for her now.

She rides her bike for leisure and, with a rack attached to the back, grocery shops at stores in that area. When she drives her car over the Ashley River Memorial bridge to the wellness center in WestEdge, she's reminded that there could be a safer way to get there, and that she could start exercising on the way to the gym. 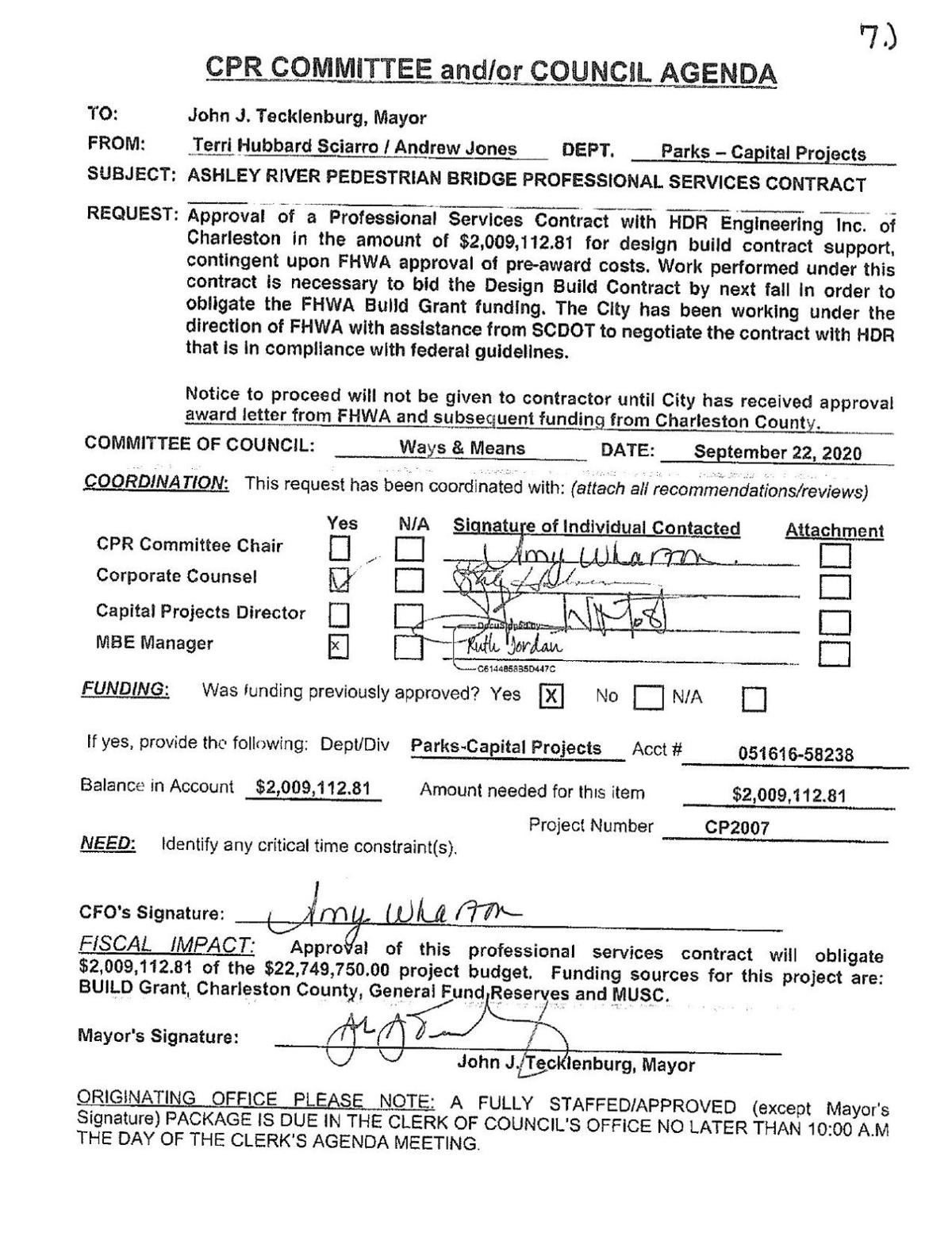 News of the progress brought both a sigh of relief and an "I'll believe it when I see it" response from Pearlstine, who otherwise called it "fantastic news."

"People are riding bikes now," Pearlstine said. "Every bike in town sold out when we were home-bound (earlier this year) and this is people taking the opportunity now and realizing how fast it is to get around on a bike. Yet it is still so unsafe."

"I know it is probably confusing for the public — all the hoops the city has had to jump through to meet all these requirements," Zimmerman said. "It's convoluted but what's great, the takeaway from this is, it's a huge step forward toward the actual deadline for construction."

Zimmerman said she guessed last year that people would be walking and biking on the bridge in 2022, and that is looking more and more like a reality.

"I believe firmly that once the bridge is built, I think it is going to be crowded and so many people will take advantage of this crossing," Zimmerman said.

Zimmerman said the research, permitting and other work done on making the bridge a reality will serve as a blueprint for the North Bridge and the James Island connector. She thinks the popularity of the new bridge will be an eye-opener for elected officials and planners, too.

Other anticipated milestones noted in the contract are completing surveys by the middle of November and a public information meeting in April.