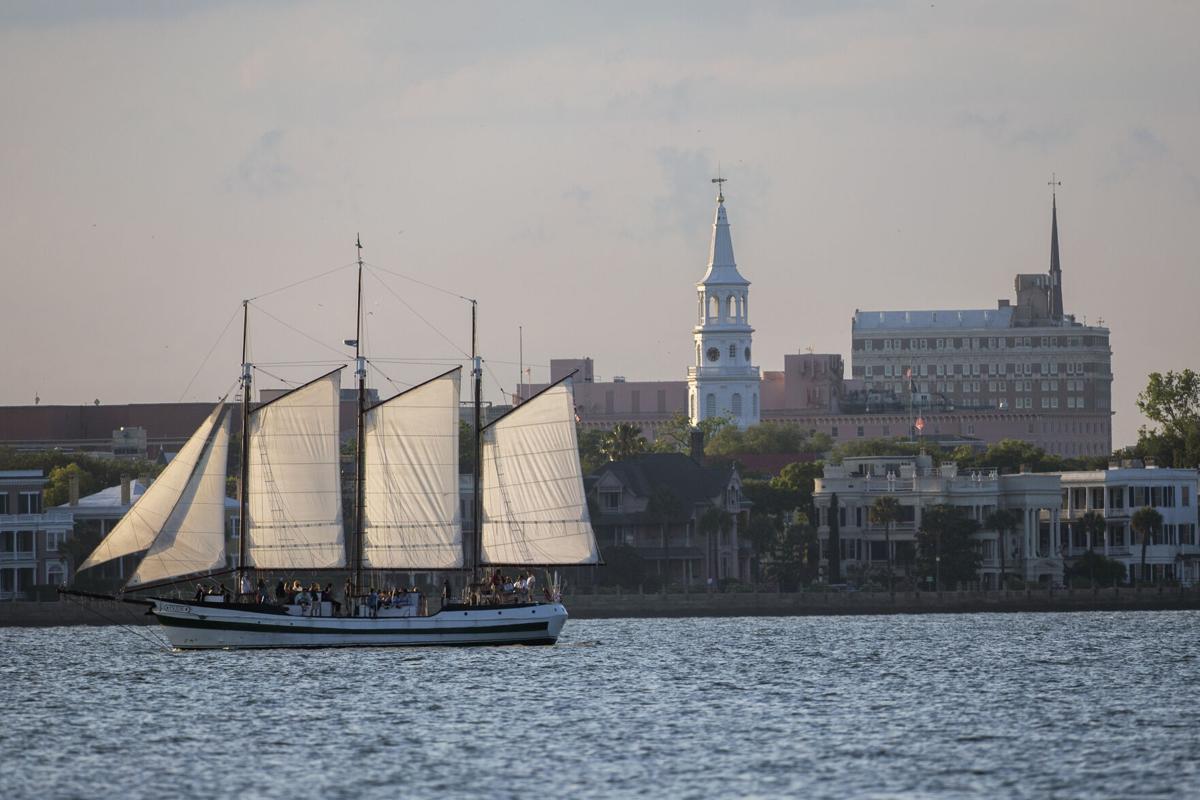 The Army Corps of Engineers' plan to encircle the Charleston peninsula with an 8-mile sea wall has gotten cheaper, but some still worry about the consequences. It would be 3 feet higher than Charleston's existing Battery sea wall. File/Gavin McIntyre/Staff 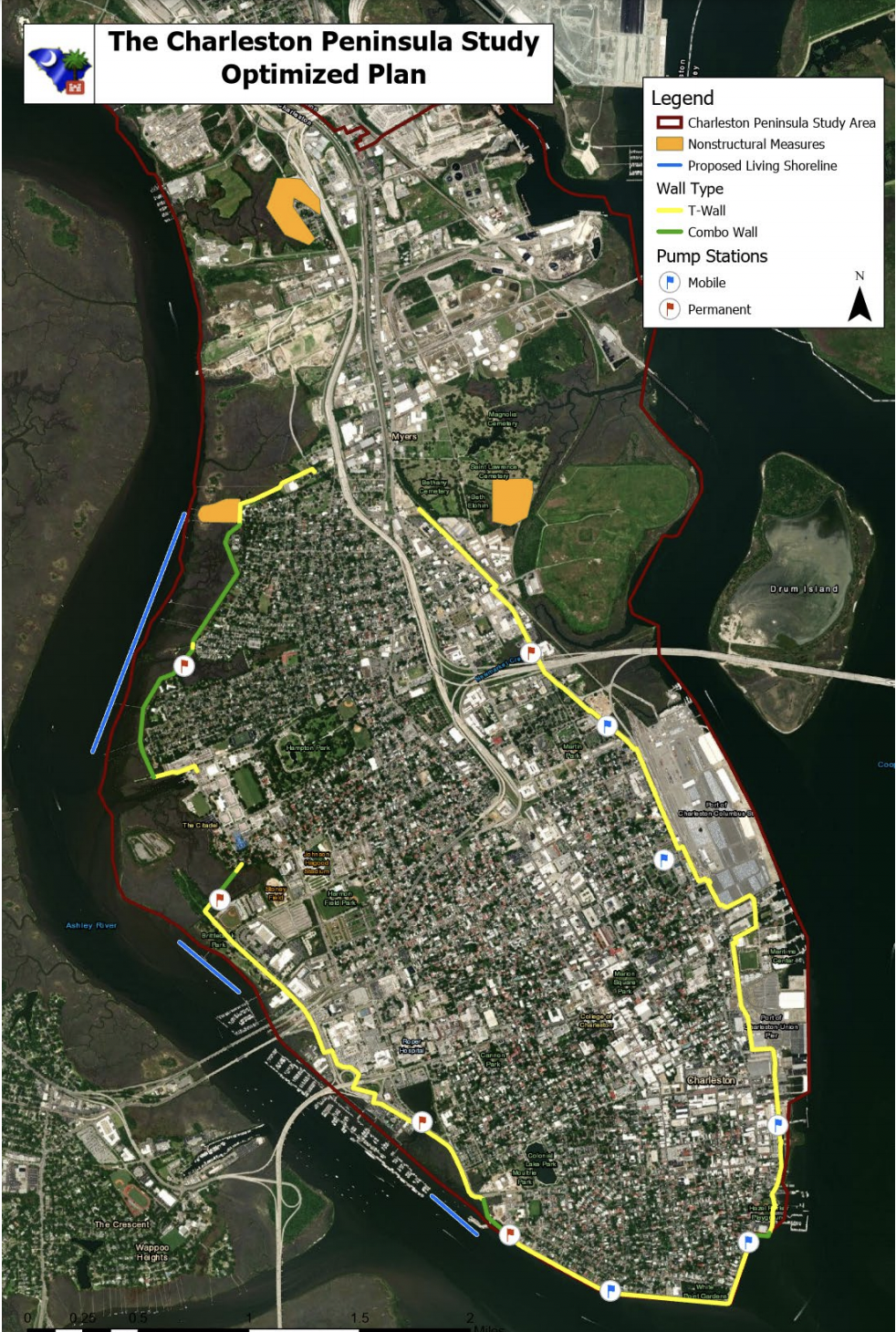 The alignment of a sea wall the Army Corps of Engineers is proposing to protect Charleston from hurricane surge. ACE/Provided

Nearly 18 months after first proposing the Charleston peninsula be encircled by an 8-mile seawall, the Army Corps of Engineers released a major update to its plan, predicting it will cost $1.1 billion, or several hundred million less than originally thought.

The updated plan, released Sept. 10, kicks off a 45-day period for the public to send in comments on the proposal.

It addresses one question that has lingered since the idea was first floated: whether a wall would deflect waves and push more flooding onto surrounding areas like West Ashley or Mount Pleasant. The Corps said having a wall would push water levels a maximum of just 1 or 2 inches higher on these neighboring landmasses, according to simulations it has completed.

The biggest change may be the lower price, and the improved ratio of benefit to cost, which could make the project far more competitive for federal approval and funding. Of the cost, Charleston has to pay 35 percent, now down to about $384.5 million.

The proposal is the most ambitious on the table to protect the city's historic core from sea-level rise and tidal flooding — effects that are already eating away at Charleston's edges and expected to worsen as the planet warms.

The public can comment on the Army Corps' plan through Oct. 25 by:

Mayor John Tecklenburg said in a Sept. 10 press conference the plan enables "the outright ability for the city of Charleston to remain here, to be here. It answers that existential threat of what happens to the city in light of storm surge, sea level rise, climate change."

The updated Charleston plan also comes at an interesting moment for the Corps. While a $14.5 billion levee project recently protected the city of New Orleans from Hurricane Ida's surge waves, other places are eschewing the engineering group's plans. Miami-Dade County in Florida recently said it would not pursue the Corps' design for a seawall along the back edges of Biscayne Bay, including through several waterfront neighborhoods.

At the same time, Charleston regularly experiences flooding now from intense rainstorms that swamp slow-draining streets, a problem the wall would not improve alone. A day before the Corps' new report was released, the same scenario played out as the remnants of tropical system Mindy traipsed over the Lowcountry, putting several roads in downtown Charleston under water.

The city is working on several drainage projects but some worry the long-term focus on the seawall proposal is distracting money and attention from those efforts. It's also a project that needs to go through several rounds of approval by the city and the Corps and Congress before detailed design could even begin, let alone construction.

"(Rainfall events) are the most common types of flooding we’re experiencing," said Jason Crowley of the Coastal Conservation League. "We still have all of these other things we need to be prioritizing and this continues to suck the oxygen out of the room."

Some watchers of the plan are also frustrated, arguing that the Corps has been too inflexible with its original idea of a large, engineered barrier, and has given only cursory attention to two minority neighborhoods that would stay outside the wall's perimeter.

Charleston's bill to fix flooding is rising. Finding the money to pay for it is a puzzle.

The proposal is in many respects similar to the first version, released in April 2020. The wall would encircle most of the downtown peninsula; it would be 3 feet higher than Charleston's highest sea wall, The Battery; it would include pumps, five being permanent and five mobile, to drain rainfall that falls inside the perimeter of the wall.

One change was announced earlier this year and shaved off some $300 million in price: the Corps will no longer try to construct a 4,000-foot-long rock pile, or breakwater, offshore of the wall to slow down incoming waves.

The changes that have been made since, however, have gone a long way to reduce the total cost, said Project Manager Wes Wilson. Moving the alignment of the wall onto high ground, instead of through marsh in some places, reduced construction and wetland mitigation costs by $250 million.

The Corps also reduced the power of the drainage pumps it will use, equating to $75 million in savings. Wilson said the original plan assumed the pumps needed to be the same size as in New Orleans, a "conservative" assumption that wasn't borne out when further analysis was done on how much water the walls would trap.

The city has the option to make those pumps larger again, if it wants, but would have to pay by itself for the additional cost, Wilson said.

The Corps also revised its math on the properties the wall would protect and found that property values rose since it last collected them in 2019. All those factors, in addition to updated economic modeling, mean the Corps now reports the ratio of benefit to cost for the work is 10.2, or almost five times higher than the number it originally reported.

The ratio is in part what determines if Congress will agree to fund the work down the road, and the new benefit-cost number is highly competitive, said Dale Morris, the city's incoming chief resiliency officer.

While the plan is refined, some are frustrated that the Corps is sticking to the concept of a wall at all, instead of relying on lighter touches such as living shorelines, or specially-placed oyster reefs that slow down waves.

Susan Lyons is a founder of the flooding advocacy group Groundswell and a member of a city committee that is assessing the Corps' plan. She said the city needed to make a comprehensive water-management plan first and then decide how the Corps' plan fits into it. A consultant for Charleston has said the same in the past.

Another frustration, she said, is that important details like the appearance of the wall won't be determined until after the city says it wants to move forward, and the Corps starts a more detailed engineering and design effort after.

"I think that the Army Corps and the city are trying to sell this project in a big way," she said, adding, "You’re buying a car sight unseen, and that’s a problem."

Crowley, of the Conservation League, added that the plan still gives little attention to Rosemont and Bridgeview Village, two minority communities at the north end of the Charleston peninsula. The Corps has said it would be too costly to extend the wall that far, and that the buildings there can be protected with elevation or floodproofing measures.

The updated plan "continues strong emphasis on primarily benefiting the wealthy neighborhoods, because of this cost-benefit focus," Crowley said.

If the city formally decides to move forward, Charleston will have to send the Corps a letter in November or December agreeing to pursue the plan and signal it can pay for its part, said Mark Wilbert, the city's retiring chief resiliency officer.

When the Corps' leadership also agrees and Congress budgets money, that would begin the detailed design phase.

The city will face another challenge then, though, which has hung over the entire affair from the beginning and remains unanswered: how to pay the hundreds of millions it would owe toward design and construction.