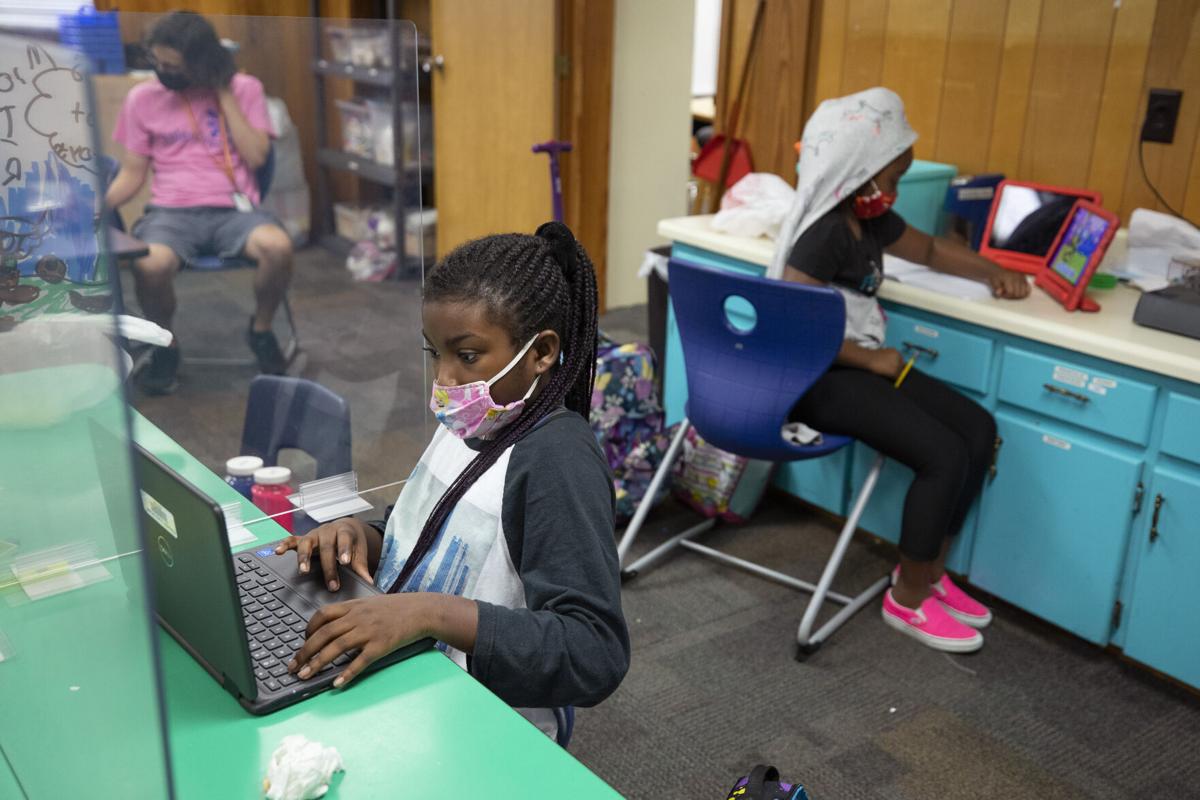 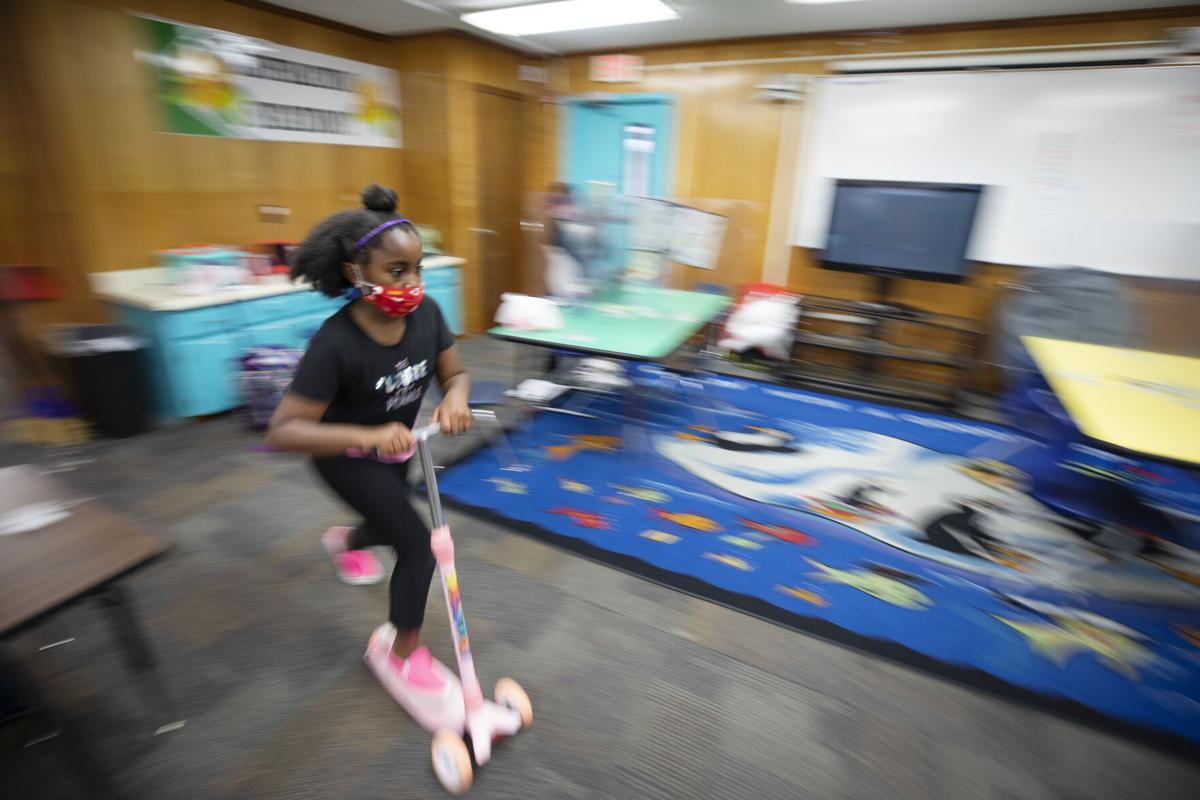 Madison Bibbs, a third grader at Goodwin Elementary School in North Charleston, rides a scooter through a learning pod classroom while taking a break from schoolwork on Thursday, Nov. 12, 2020. Lauren Petracca/Staff 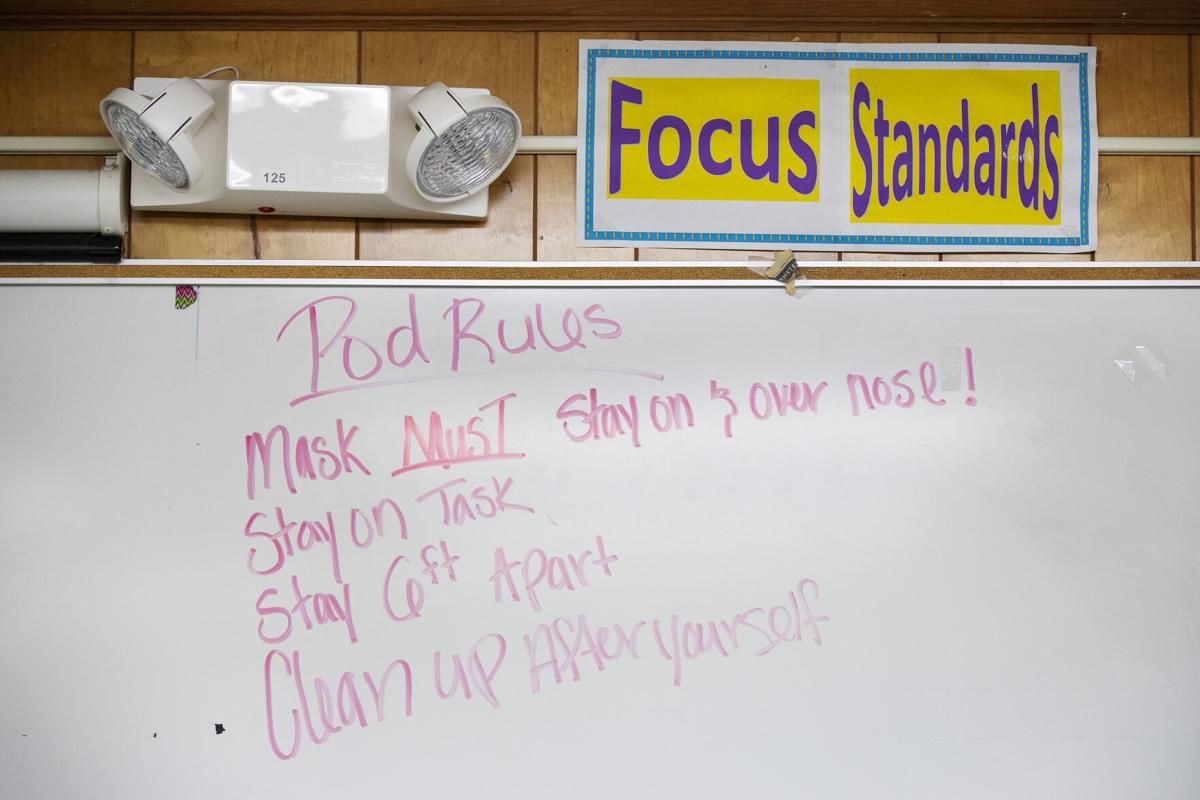 Rules for the learning pod at Goodwin Elementary School in North Charleston are listed on a whiteboard on Thursday, Nov. 12, 2020. Lauren Petracca/Staff 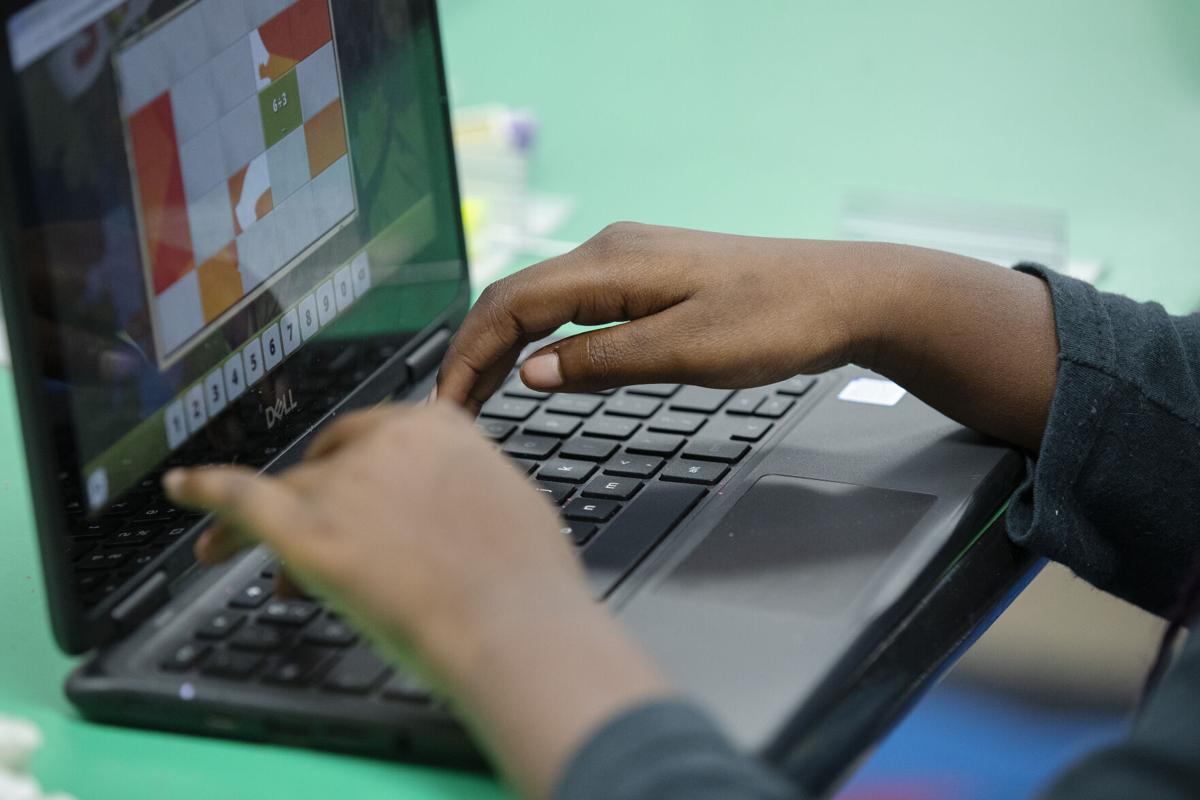 Kenadie Bailey, a fourth grader at Goodwin Elementary School in North Charleston, does schoolwork on a laptop on Thursday, Nov. 12, 2020. Lauren Petracca/Staff 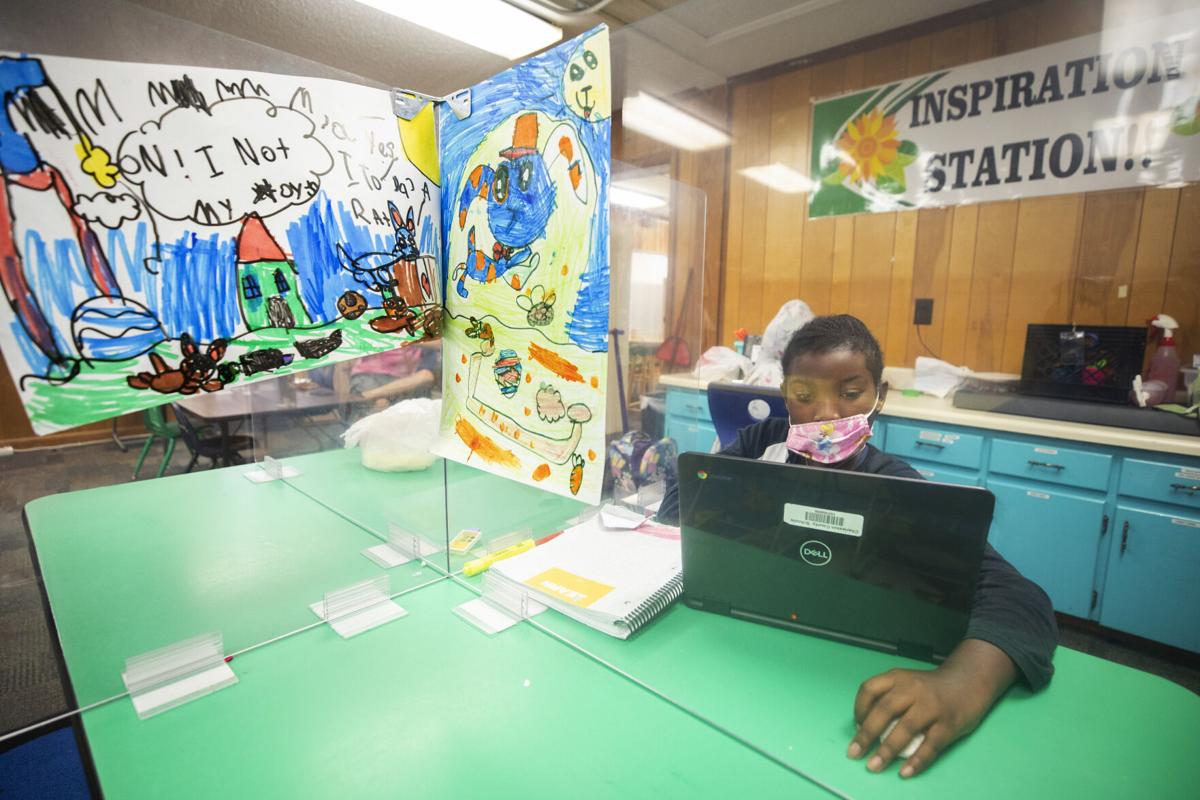 When Charleston County schools first reopened their doors in September after six long months of coronavirus-mandated online learning, parents were presented with a difficult choice.

They could opt to send their children back to the classroom in person and risk them getting infected with a deadly virus, or they could attempt to minimize health and safety risks by having them start the school year from behind a computer screen, isolated from their peers and teachers.

Around 27,500 students, or around 54 percent of the district’s total student population, ultimately decided to tune in to their first day of school virtually, a figure that far exceeded the district’s initial projections.

But the students who wished to remain online weren’t distributed evenly across the school district, a region that spans over 100 miles from Awendaw to Edisto.

The issue: Some of the families in low-income areas struggled the most with the shift to online learning this spring when schools districtwide shut their doors.

The district spent months funneling its resources into planning how to best reopen schools in person for students, while plans to accommodate and support online students largely fell by the wayside.

As a result, board members approved a measure in early September allowing district officials to partner with nonprofits, churches and other community groups to create "instructional support groups," also commonly referred to as "learning pods," where online students gather in small numbers to socialize and receive academic help.

These groups, also known as "pandemic pods" or "microschools," have exploded in recent months, largely within affluent communities, where parents can afford to hire a private tutor or child care provider.

Conscious of this grim reality between the haves and the have-nots, the school district set out to make learning pods free and accessible for the students who need them the most.

The first learning pod launched in October at W. B. Goodwin Elementary School. Eight students spread across two trailers on the North Charleston campus received supervision from a former teacher as they signed on to their Zoom classes and completed homework, projects and assignments from 7:30 a.m. to 1:30 p.m.

The pods follow the same cleaning protocol and safety regulations put in place at traditional CCSD schools. Students and employees will be expected to socially distance, wash hands frequently and wear a face covering while inside the building.

Since most of the children enrolled in the program qualify for free and reduced meals, the district provides breakfast and lunch for students at this learning site.

The Goodwin pod was designed to serve as a prototype for other learning support groups across the district, said Don Kennedy, the district’s chief financial officer.

The focus has primarily been on creating pods in the North Charleston constituent district, where, as of early November, only 50 percent of students in the region had returned to the classroom in person every day compared with the 75 percent of Mount Pleasant students who have returned face-to-face.

"We know for sure that some students may not be engaged, they may not be connecting with the technology, they may be having difficulties," Kennedy said. "We know some students are really struggling socially and emotionally by being isolated."

Three organizations, including two churches, have partnered with the district so far to launch classrooms in their facilities.

The Azalea Drive Church of Christ is expected to launch its pods later this month. To start off, the church isn’t expecting to host more than 15 students at a time, including the children who will transfer over from the Goodwin Elementary pod, said Coakley Hilton, the church’s outreach ministry chairman.

Even before the onset of the coronavirus pandemic, the church and its philanthropic arm, the Drive Foundation, outlined a vision for establishing an educational literacy program, he said.

Many children in the area are watched by their grandparents, he said.

"We know how serious this situation is. It's a shame that a parent or grandparent has to make a decision whether to go to work or send their child to school," he said. "That’s a terrible choice."

Hilton, who owns a funeral home in the area, said he’s seen firsthand how educational inequities have impacted his community.

Back to the roots

Ever since the pandemic hit, much of the space at the Azalea Drive church building sits dormant, said Senior Minister Antwan Brown.

The church will offer the physical space to host the learning pods and the school district will supply certified educators to supervise the children, Brown said. The district also paid to help boost the church’s internet connectivity.

The district will use some of the additional $4.7 million the state is set to send to the school district in a second round of coronavirus relief bill funding, Kennedy said.

It’s not surprising that many students of color opted to not return to schools in person, Brown said. Research has shown that Black and Hispanic communities are disproportionately affected by the virus that’s killed more than 3,815 South Carolinians since March.

For Brown and other leaders at Azalea Drive, the opportunity to host students on campus is the fulfillment of a long-term vision.

Growing up, there were three entities involved in raising children, Brown said. The home, the school and the church.

It’s a similar story for many of the elders in his congregation, he said.

"So, this is really getting back to the roots of what used to be so common in the Black community. We really wanted to be a part of that bedrock foundation of helping children learn and families grow," he said.

In addition to Azalea Drive Church of Christ, the district has finalized agreements with North Charleston United Methodist Church and Beyond Our Walls, a North Charleston-based nonprofit. Each location is expected to at least host 20 students, divided into groups of four children per pod, Kennedy said. Depending on the size of the building, some of these spaces could host as many as 60 students at a time.

The district hopes to eventually expand to areas including Hollywood, Johns Island and Ravenel, Kennedy said, where large percentages of students also opted not to return to the classroom in person.

Still, the district’s ultimate goal is to persuade those students who feel comfortable in the learning pods to eventually return to the classroom in person.

'There will be teachers that resign': First week back at schools brings questions, stress

Of the eight original students in the Goodwin pod, six have returned to the classroom so far.

Brown said he's just relieved the church will be able to help offset the demands of virtual learning, especially for students who might have been struggling academically long before the pandemic.

"For me, the fear was that our children would dig themselves in a hole they could not dig themselves out of," Brown said. "And we did not want to be sitting on the sidelines just watching them fail."