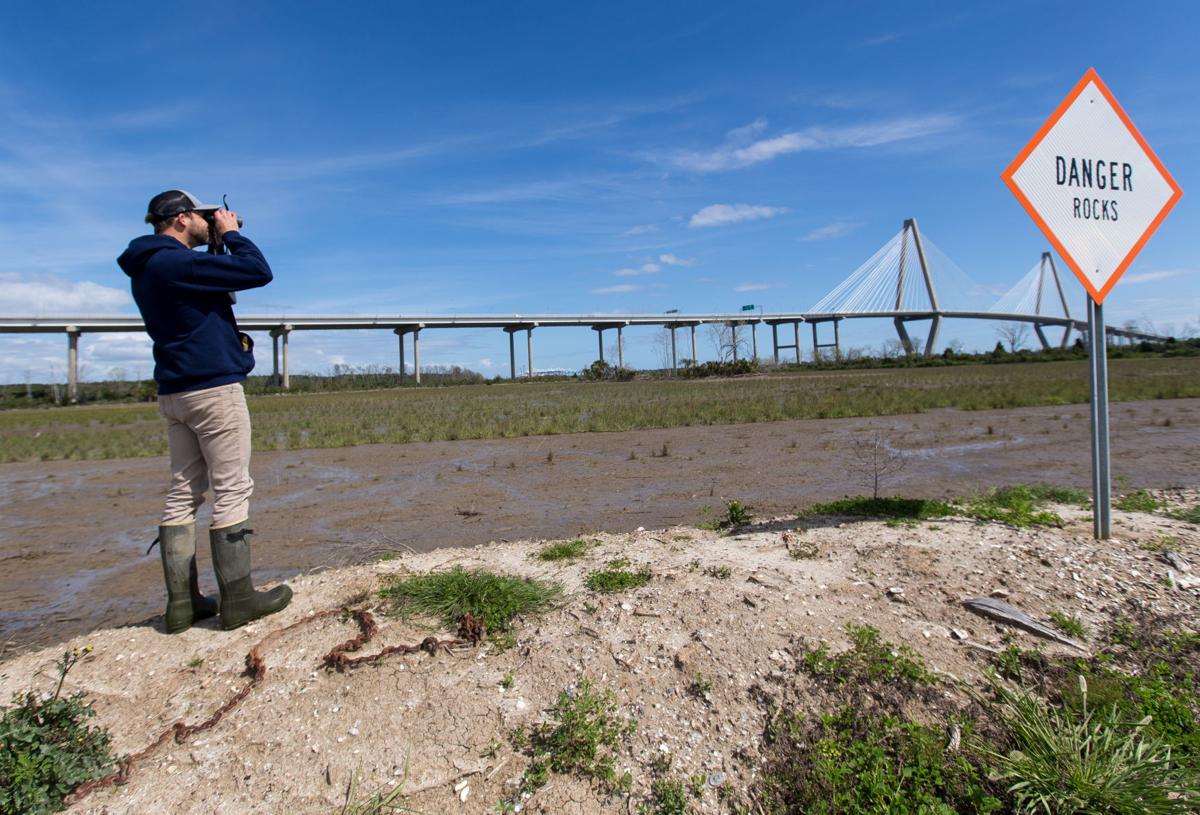 Mark Messersmith looks out into the distance on Drum Island Monday, March 9, 2020. The State Ports Authority has replanted native spartina plants and cut the creeks to restore 22 acres of tidal marsh on the south end of Drum Island. Andrew Whitaker/Staff 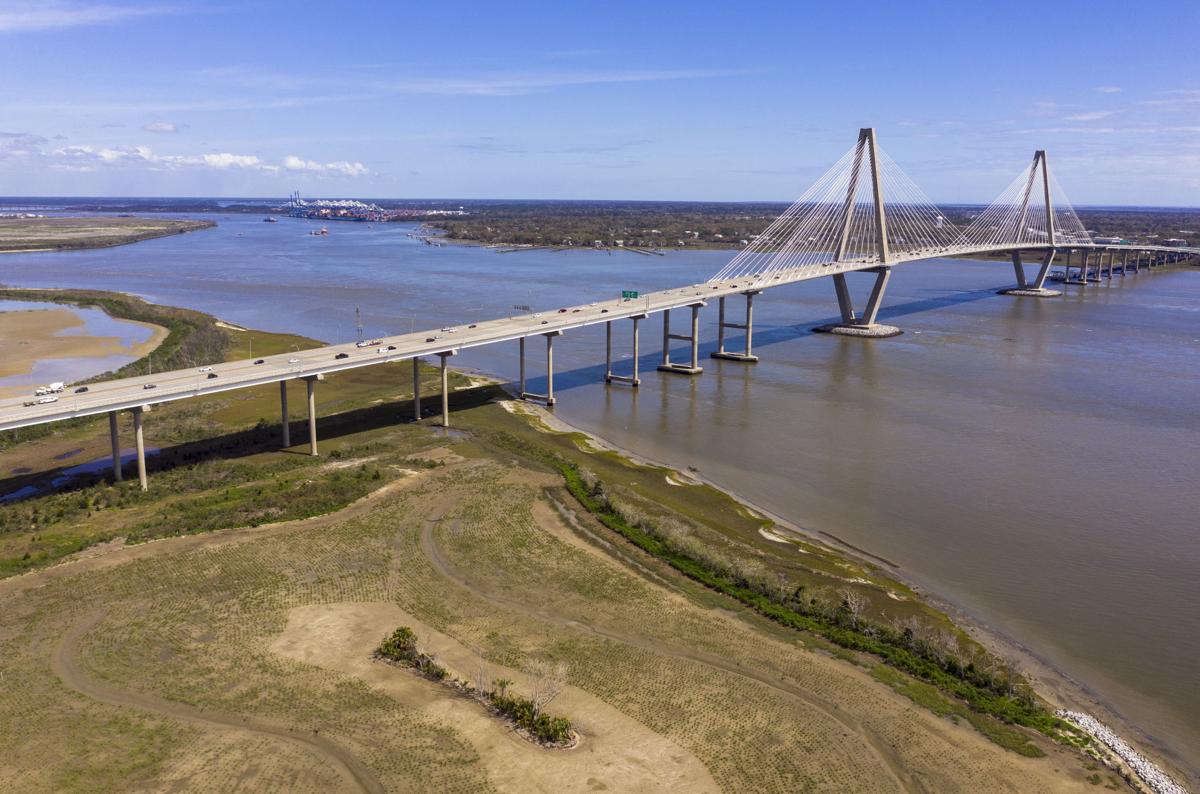 The State Ports Authority has replanted native spartina plants and cut the creeks to restore 22 acres of tidal marsh on the south end of Drum Island. A few years from now, at least some nests could return to the former shorebird rookery. Andrew Whitaker/Staff 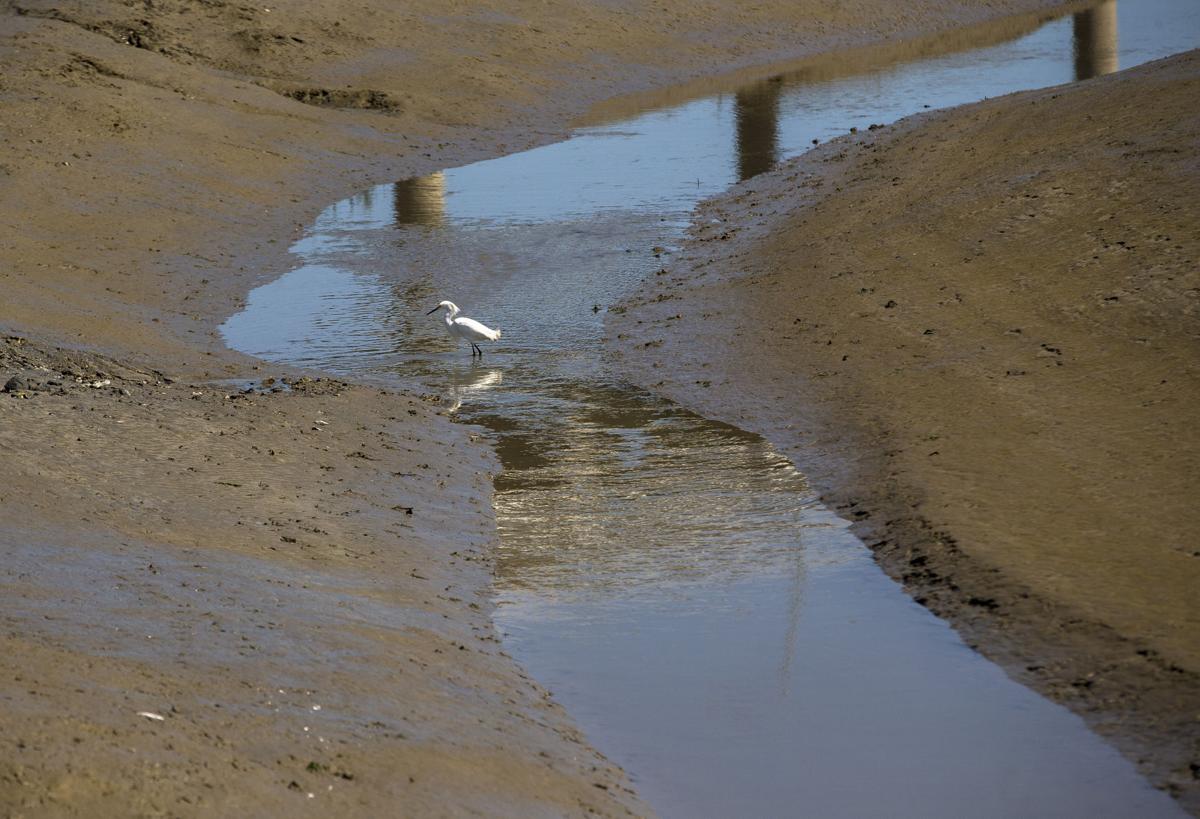 A snowy egret is seen on Drum Island Monday, March 9, 2020. The State Ports Authority has replanted native spartina plants and cut the creeks to restore 22 acres of tidal marsh on the south end of Drum. A few years from now, at least some nests could return to a former shorebird rookery that was an eye-catcher for commuters and people on the walkway over the bridge. Andrew Whitaker/Staff 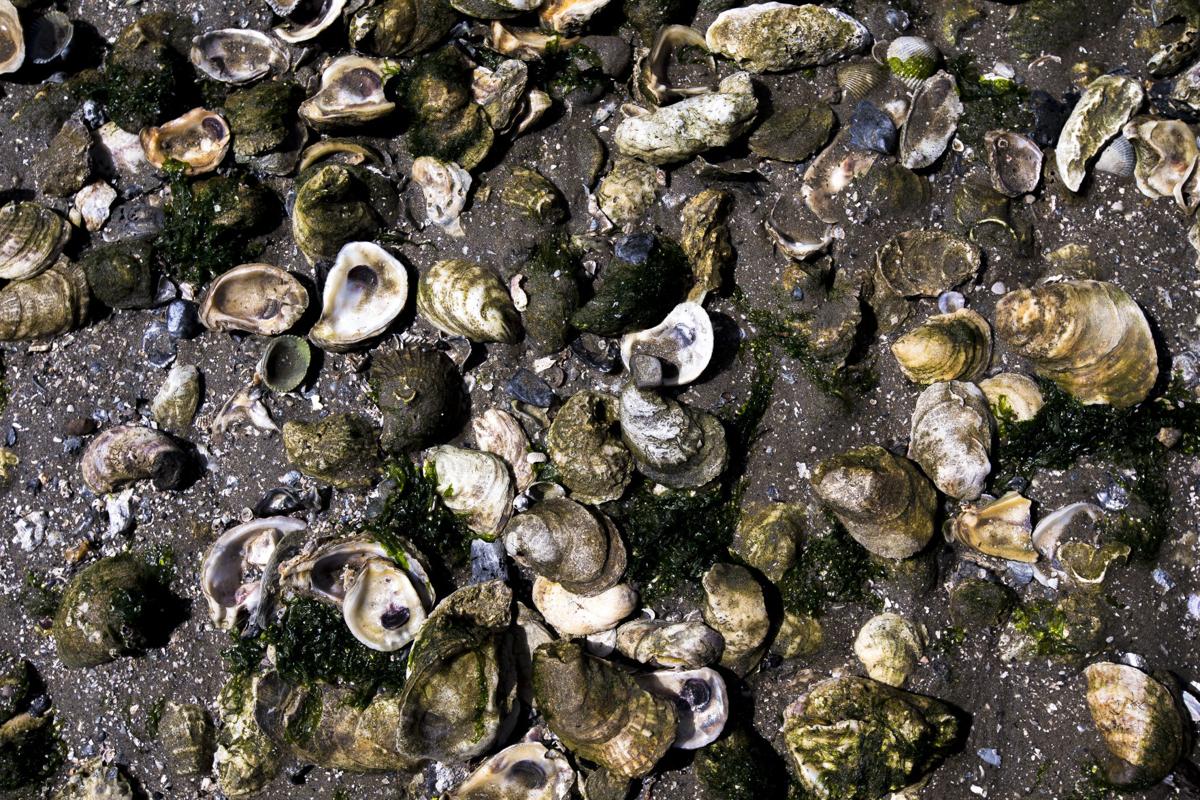 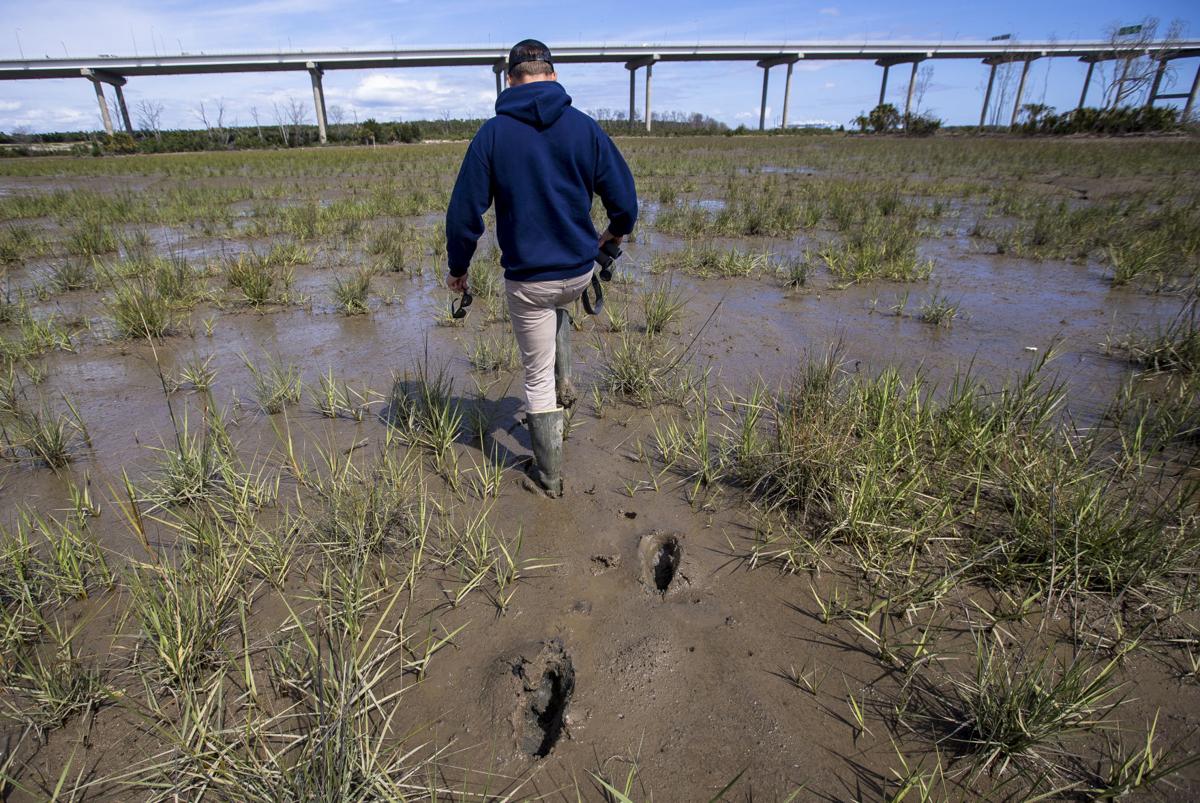 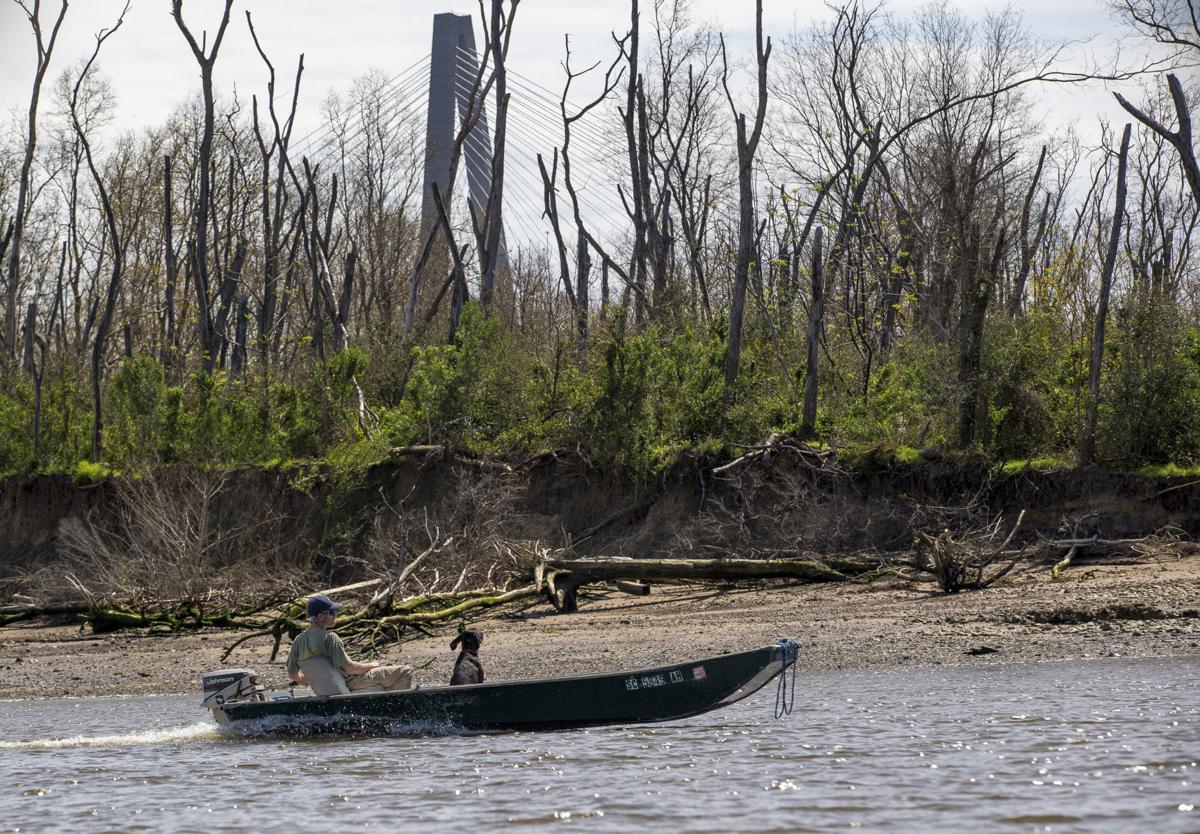 Mark Messersmith looks out into the distance on Drum Island Monday, March 9, 2020. The State Ports Authority has replanted native spartina plants and cut the creeks to restore 22 acres of tidal marsh on the south end of Drum Island. Andrew Whitaker/Staff

DRUM ISLAND — A great egret pops its head out of the new marsh below the massive pylons of the Arthur Ravenel Jr. Bridge.

Then a small flock of white ibises scoots along, picking at the worms and fiddler crabs from a creek bank. A snowy egret and a young blue heron peck along a newly established oyster bed. A kingfisher settles in the wax myrtle tree and a merganser duck hunts at the creek's mouth.

A year ago, this swath of Drum Island was dredge spoils.

The State Ports Authority has replanted native spartina plants and cut the creeks to restore 22 acres of tidal marsh on the south end of Drum Island. A few years from now, at least some nests could return to a former shorebird rookery that was an eye-catcher for commuters and people on the walkway over the bridge.

That's the hope. The $4 million project was mitigation for filling in 11 acres of wetlands for the new North Charleston shipping terminal.

In other words, Drum Island might be the region's most visible urban attempt at mitigation, the controversial conserve-as-you-build policy that has become a go-to for both conservationists and developers in South Carolina.

The restored marsh "is just a wonderful piece of landscape architecture," said Lawrence O. Thompson, 70, who lives in downtown Charleston and has walked, run or biked the bridge for years.

The Ports Authority hadn't dumped there in a few years. The tip had eroded and the fringe of trees had fallen into the beach tide. It would have been costly to bring the two relatively small basins back to use for dredge materials.

Meanwhile, the natural protections that keep a rookery viable had been lost. Raccoons took out the eggs and the birds nested elsewhere. It was a prime spot for an urban mitigation effort.

Drum Island has long been a disjointed mix of the natural and industrial environs around it. Mark Messersmith, the Ports Authority's environmental permitting manager, picks up a chunk of coal as he walks the narrow beach, likely a remnant lost from a former coal 'tipple," or coal loading pier that still stands in ruins across Town Creek from the island.

The south end is only a small portion of the island and the rest is still an active spoils basin.

The rookery had been one of those vital habitats for species of seabirds and shorebirds — from pelicans flying in formation by the dozens to black skimmers and oystercatchers hunting inches above the water.

"The island got too big, the predators came out and the birds went away," Messersmith said.

The restoration had to start from scratch. Among the first jobs was removing phragmites, tall growing reeds that choke out native food plants. The grounds had to be leveled in some spots and raised in others so the tidal creeks would flow.

The work started clumsily, with contractor equipment stuck in the muck and passersby complaining all they were doing was making a wreck of the place.

The spartina "is amazing. It's really taking off," Messersmith said.

Spartina is the slender, grassy plant that makes up much of the tidal marsh in South Carolina. It's where baitfish spawn and oysters grow, providing cover and food for the coast's birds.

Mitigation is a federally required trade made by developers to be allowed to develop marshes, wetlands or other protected spots. It can be paying to preserve a tract already set aside for that purpose in what's called a mitigation bank. It can be a partial or full restoration effort like Drum Island.

The practice, which has become common on the swamped and booming coast, has been criticized as paying to destroy natural wetlands.

Because environmental groups tend to push for mitigation tracts to add to existing larger scale conservation properties, the protected tracts often end up somewhere other than where the damage is done.

But maybe the biggest concern is still the toughest to answer: Does mitigation do the job? Does it keep enough of a presence of natural environs and wildlife for quality of life as an area urbanizes.

The answer is still out there.

Mitigation has an interesting legacy. The practice grew from a vaguely defined guidance in the original federal Clean Water Act. Different states interpreted it differently, and have had varying successes.

In South Carolina, where tidal marshes and freshwater wetlands make up millions of acres, mitigation tracts have become a significant portion of more than 1.5 million acres preserved in the state.

"It has been much more effective than realized at first. In South Carolina we've shaped it to be responsive to the needs of the area," said Dana Beach, founder of the Coastal Conservation League.

"The reality is there is no stopping the juggernaut of development. We're doing more conservation with less money than any other state in the country," he said.

Drum Island isn't a sure success. Pipe gauges have been installed to monitor the tidal flow. There are patches where the spartina is struggling to grow. And there are always the raccoons.

But soon after the planting, fiddler crabs moved in, followed by blue crabs. The crabs, worms and snails already are plentiful enough to lure the birds. The creek mouths are fishing spots, and the baitfish pushed in and out by the tides ought to draw more game species.

Thompson talks about the days of the bird rookery when he could watch for deer as he crossed the bridge. He didn't know what to think when the restoration work began, he said. Now he's waiting to see if the deer return.

"Just seeing all these ibis feeding, that's pretty good. There's so few places left where the birds can feed undisturbed," said Nolan Schillerstrom, Audubon South Carolina's coastal program associate. He looked over the planting, then up at the people staring down from the Ravenel's pedestrian walkway 500 feet above.