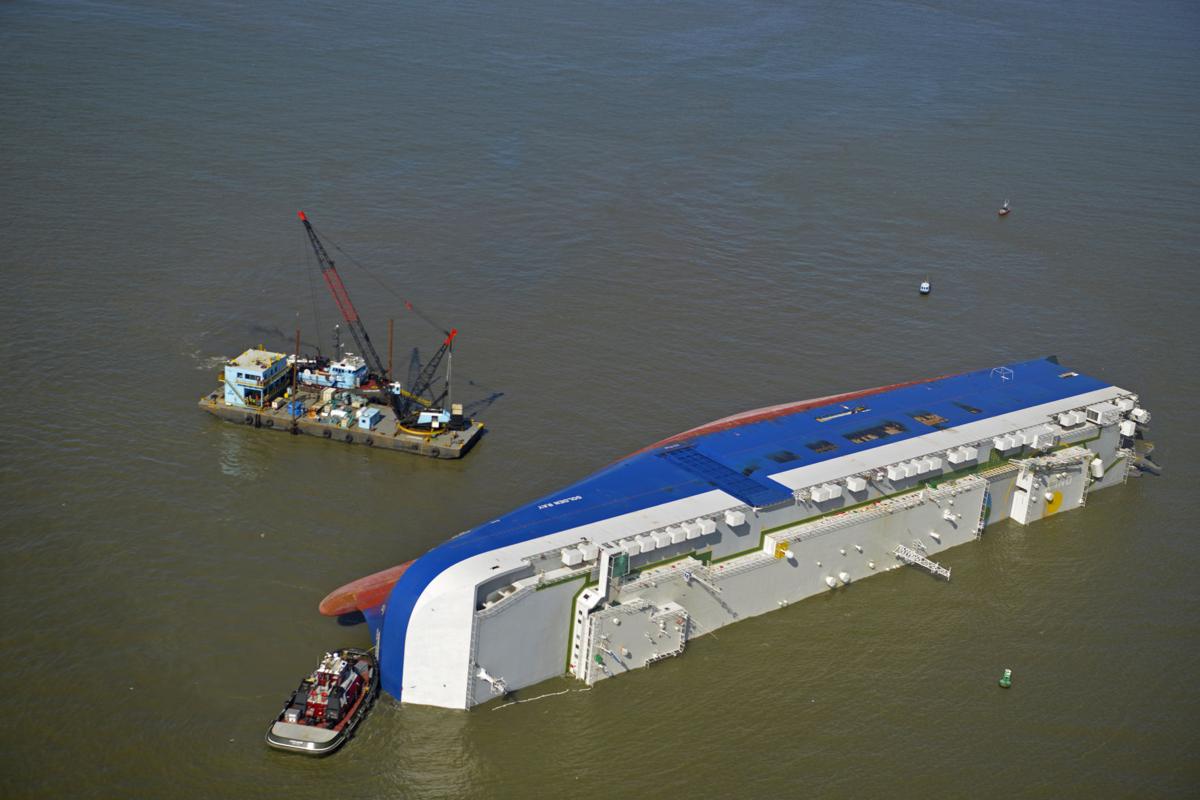 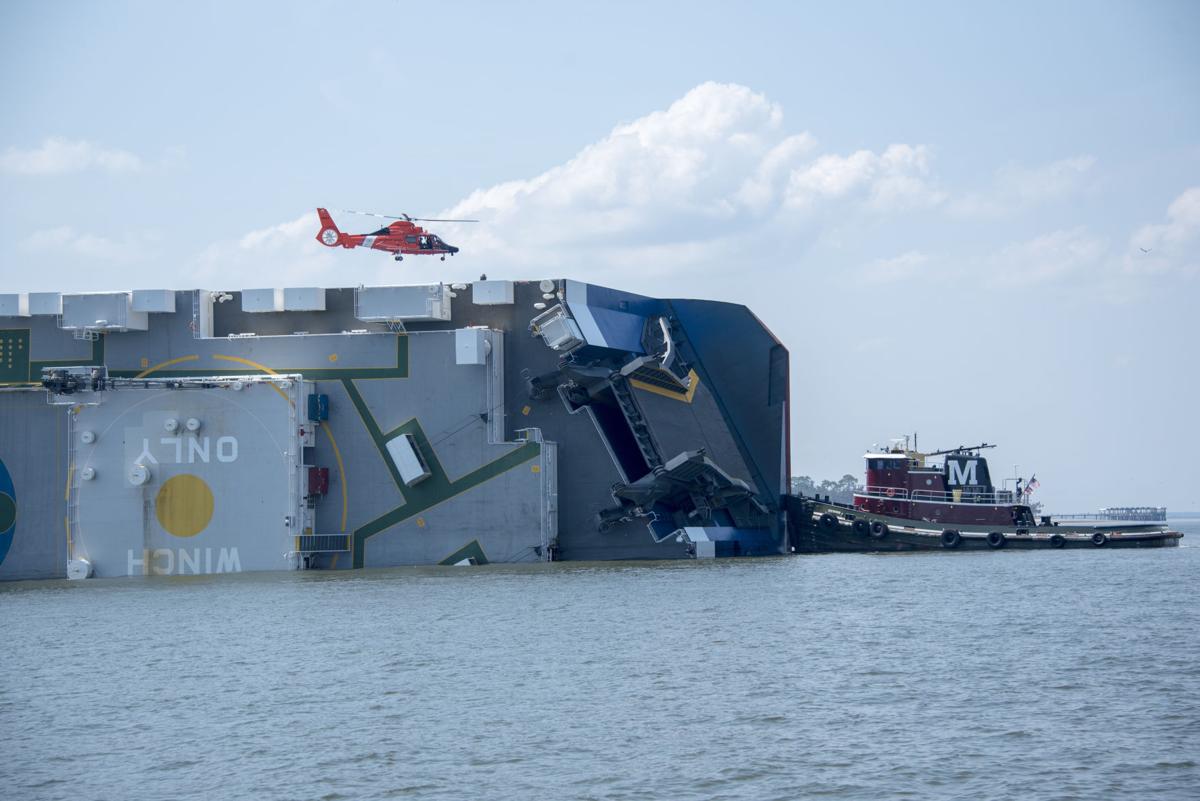 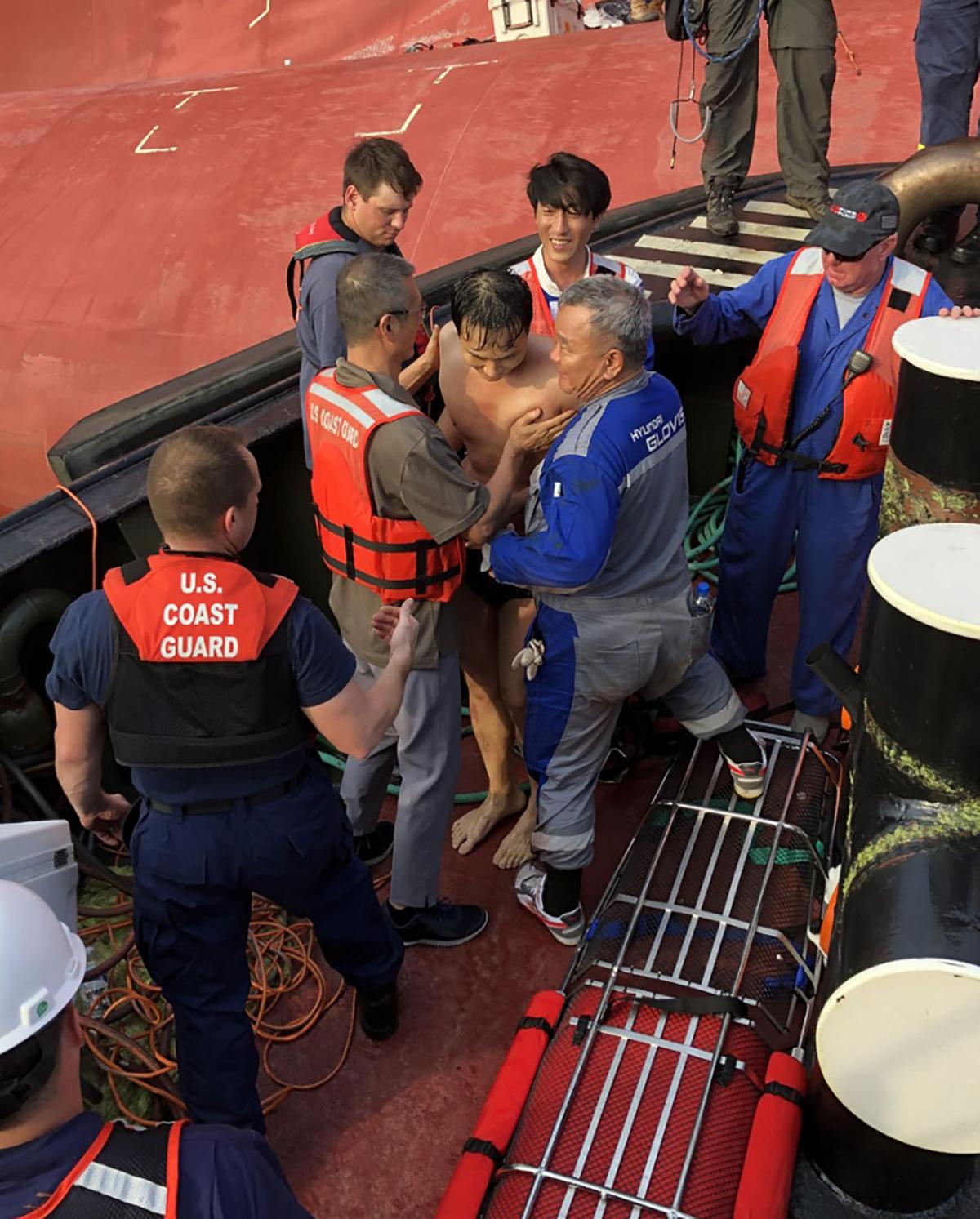 A crew member of the cargo ship Golden Ray is helped off the capsized ship off St. Simons Island, Ga., on Monday, Sept. 10, 2019. File/U.S. Coast Guard via AP 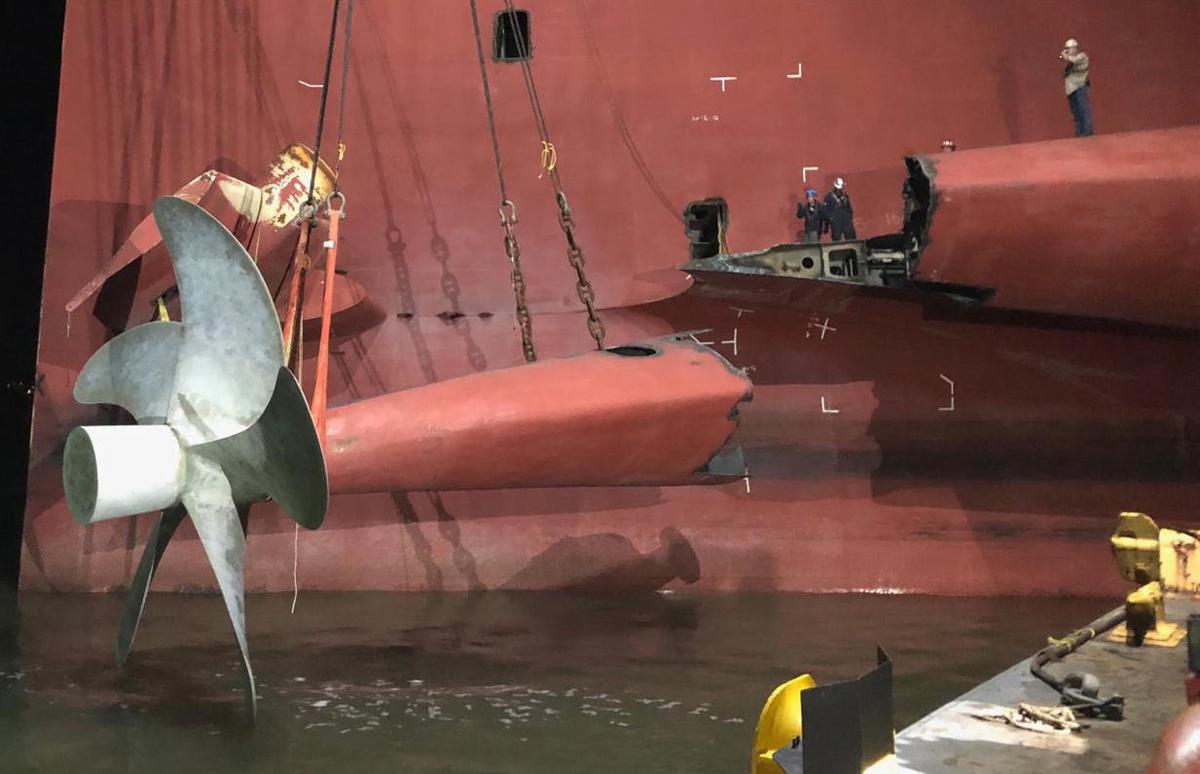 Crews work to remove the propeller from the Golden Ray in St. Simons Sound on Dec. 20, 2019. Provided 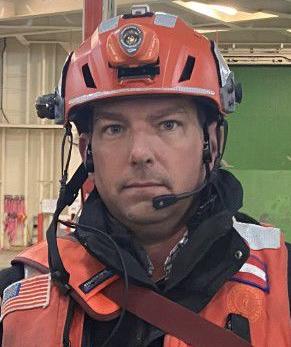 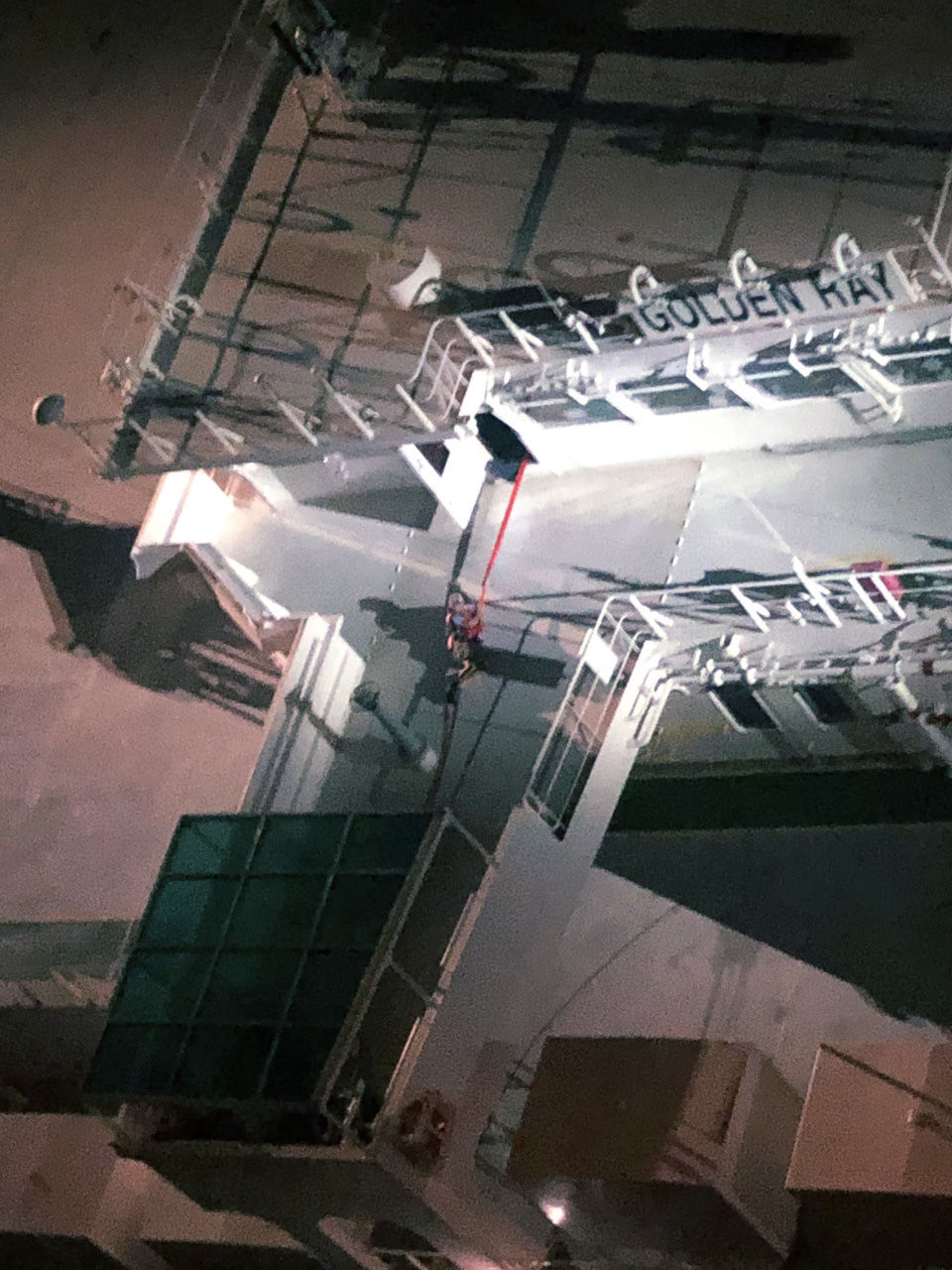 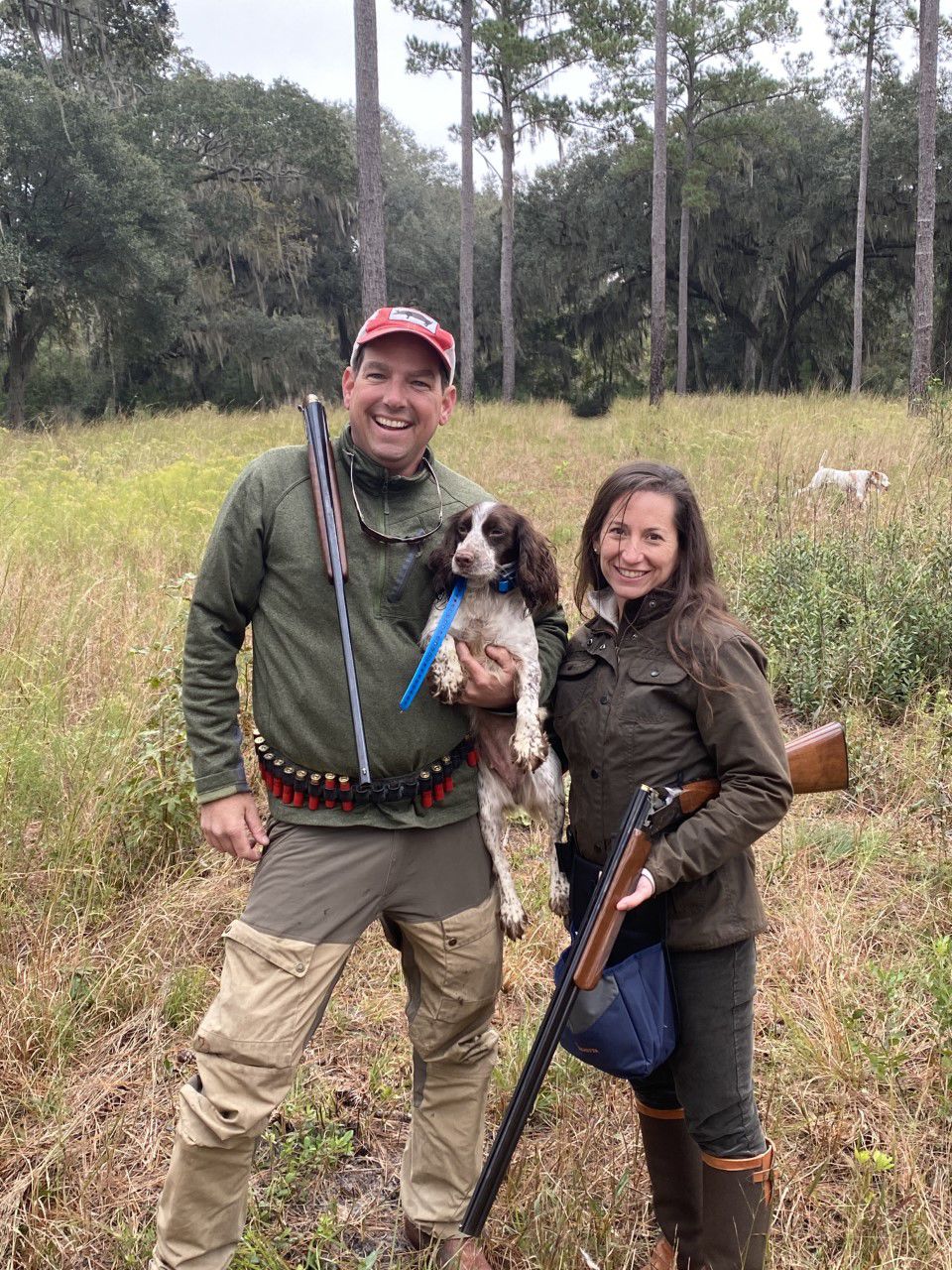 Jonathan Tennant and Tracey Booth Tennant, his wife, both of whom grew up in Charleston. Provided

Jonathan Tennant and Tracey Booth Tennant, his wife, both of whom grew up in Charleston. Provided

The caller was frantic. The 911 dispatcher who picked up in the late night sat stunned.

"A large cargo ship was making the turn just around the Jekylls Point pier, and it literally just rolled over and is upside down," the caller said.

It was 1:37 a.m. Sept. 8, only a few days after Hurricane Dorian roared past Brunswick, Georgia. There was a startled pause and a few scrambled exchanges while the dispatcher tried to clarify.

"You need to notify the Coast Guard because there's another cargo ship coming in and they won't see it," the caller warned.

Those were the first moments anyone besides harbor pilot and Charleston native Jonathan "J.T." Tennant and the crew of the Golden Ray knew how bad the disaster unfolding around them was turning.

The 20,000-ton, car-carrying Golden Ray had capsized in a matter of seconds. Tennant, 45, grabbed hold of a large navigation compass to keep from sliding away and was thrown against the wheelhouse windshield.

As the massive ship went over, Tennant swung the rudder all the way to the port side to get the Golden Ray out of the heart of the shipping channel and clear of the oncoming ship. Clinging to the compass he grounded the ship on a sandbar just as the rudder came out of the water.

That alone was impressive. What he did for the next three hours was pro.

The capsize of the Golden Ray is under investigation by the Coast Guard and the National Transportation Safety Board, a process that will take months to complete. But Tennant, of the Brunswick Bar Pilots Association, has been praised for his actions.

Without him "we would have an even bigger problem," said Griff Lynch, executive director of the Georgia Ports Authority at a State of the Ports meeting afterward.

"Perched precariously in the dark with the only functional communication equipment on the ship, the pilot coordinated the rescue of the crew with the United States Coast Guard," reads a House of Representatives resolution honoring him.

Most of the 23 souls on board that Sunday had been thrown against a wall or a piece of equipment. Power was out and many were in the dark. The Golden Ray was on fire. Alarms clanged deafeningly loud.

Tennant had grabbed his survival vest as it slid off the shelf next to him. His handheld radio was attached. The massive steel hull of the ship was between him and the harbor, so he couldn't reach any help nearby. But the mayday reached a U.S. Coast Guard relay antenna up the coast where Coast Guard Sector Charleston staff monitors around the clock.

"I was able to perch myself (on the compass) and wedge myself in against the windshield so I could call," Tennant told The Post and Courier. "Charleston picked up right away, which was amazing."

As Tennant reached Charleston, the weight of the ship was settling into the sand. The tide was coming in. If the Golden Ray slid free it would sink in the deeper channel water, potentially drowning everyone aboard. But the harbor pilot at the helm of the incoming ship picked up the mayday and called for the Moran Towing tug waiting at the port.

The tug sped out and began pushing full bore on the hull to keep the ship aground.

Large rocks would later be placed around the ship to keep it from slipping off and sinking.

It's sixth-busiest port nationwide for car-carrying ships, moving more than a half-million vehicles per year, according to the Journal of Commerce.

The design of the high-standing profile, heavy-laden car-carrying ships is somewhat trouble-prone and the Golden Ray isn't the first to go down in recent years. As a few examples:

Ballast water gives a loaded ship enough weight low to counterbalance the cargo high. The water has to be dumped and refilled each time a ship reaches a new port, and a crew member is assigned to track that weight as well as the weight of cargo loaded, refiguring the balance as the ship goes.

Tradewinds reporter Adam Corbett noted that stability problems and fire are the two big problems the car carriers have.

Editorial: Could a 'ro-ro' disaster happen in Charleston? Here's how to prevent it

The Golden Ray had just left the Georgia docks in Fancy Bluff Creek, on its way to Baltimore. Owned by Hyundai Glovis, a South Korean company, the ship was more than two football fields long and more than 7 building stories high. It had 4,200 vehicles aboard.

It was making its first hard turn to starboard in Saint Simons Sound when it toppled.

Car-carrying cargo ships are so ponderous that, unlike smaller vessels, a pilot can't really judge whether the craft is top-heavy. The piloting experience has been described as like steering a shoebox.

"Stability is not something you can see and in many cases you can't feel it's not stable until it's a precarious situation," said John Cameron, Charleston Branch Pilots Association director, who helped at the Brunswick port during the incident.

Dream career on the water

The scene was chaotic. Crew members were lowering fire hoses and sliding to the water as rescue craft and two Coast Guard helicopters arrived and swimmers deployed.

Tennant relayed messages where to find the remaining crew.

Working with the ship's captain, who was hanging on to gear in the wheelhouse with him, Tennant tried to communicate with those still aboard, but the clanging alarms and language difficulties with the South Korean and Filipino crew made it virtually impossible.

Tennant grew up in Avondale, a West Ashley neighborhood, wanting to pilot cargo ships. He has been with the Brunswick Bar Pilots Association since 1998.

He was a child the day he was watching a containership work its way out Charleston Harbor, turned to his mom, Anne Crane, and asked, "Who drives these big ships in here?"

He caught the bug, riding his bicycle as a Bishop England High School student from Avondale to Charles Towne Landing Historic Site in a settler's costume to work aboard the Adventure, a replica 17th-century sailing ship similar to the one the Europeans first settled in the mud there.

He graduated the U.S. Merchant Marine Academy and within a year was apprenticing with the Brunswick pilots.

He has a military bearing and an affable manner, but he's no stranger to trauma. His sister, Amy Tennant, was brutally killed by a boyfriend in a murder-suicide on Easter Sunday in 1988 when she was 17 and he was 13. Tennant found her. Even today, he and Lisa Weil, the oldest sister, find themselves talking about Amy when they get together.

"She was a big part of my life," Tennant said.

Tennant's career would eventually lead overseas. As a 12-year Navy Reserve officer with a rank of lieutenant commander, he was a docking pilot for the Navy in Kuwait during fighting in Iraq and Afghanistan.

Perched on the compass on the Golden Ray, wedged against a wheelhouse windshield in the dark, he did his job.

A tradition in seamanship

The flames eventually died out.

Tennant kept wedged against the windshield until nearly daylight, until 19 of the 23 crew members aboard were rescued.

"There was nowhere else I could go but fall," he said.

The last four crew member were trapped below deck in an engine room with no way to immediately find them. They were rescued a day and a half later after a hole was bored into the overturned hull and rescuers tapped on walls until they heard return taps.

The ship is now being dismantled piece by piece for scrap.

In the best tradition of seamanship, the captain and Tennant left the Golden Ray only after they had done all they could. The captain was hoisted down by rescuers.

Tennant slid down a fire hose.

"It was a tremendous effort by the Coast Guard, the vessels in service and the people aboard," Cameron said. "I'm confident the pilot's actions led to the best possible outcome. I don't know if there's a tradition like (last to leave) among harbor pilots, but certainly a pilot will provide local knowledge and expertise to aid seamen in distress."

Tennant said the successful grounding and rescue came down to the grace of God.

"It was a tragedy and it may be a disaster. But it could have been worse. Had it happened anywhere in the harbor it would have blocked the port," he said. "The ship could have rolled over out to sea with no one around and no way to call for help."