The director of Charleston's Public Service Department, the city's highest-ranking engineer who guides decisions about drainage and flood prevention, resigned on Monday after nearly three decades on the job.

Laura Cabiness was hired as a city engineer in 1990 and was promoted in 1997 to her current role as the department head. Her last day is Nov. 16.

Cabiness submitted her resignation after meeting late last week with Mayor John Tecklenburg. He informed her of his plan to create a new stormwater department, which would take over all the drainage and flood-related functions currently handled in public service.

With the change, the Public Service Department would continue overseeing other divisions, such as building inspections, garbage collection and road and sidewalk maintenance.

The mayor offered Cabiness two options: stay on as head of public service, or apply for the new position to head the stormwater department. She chose to retire and continue working elsewhere as a stormwater engineer, according to her letter.

Tecklenburg said he chose not to automatically place Cabiness in the new role so he could consider other candidates.

"I think it’s fair to the citizens of Charleston to have a fair and open process to see the best candidates that we can for this new position," he said. "I feel like she’s been a tremendous asset to the city of Charleston and has had a remarkable career. She’s worked long enough to where she can make decisions and retire, and she’s made that decision based on what’s been presented." 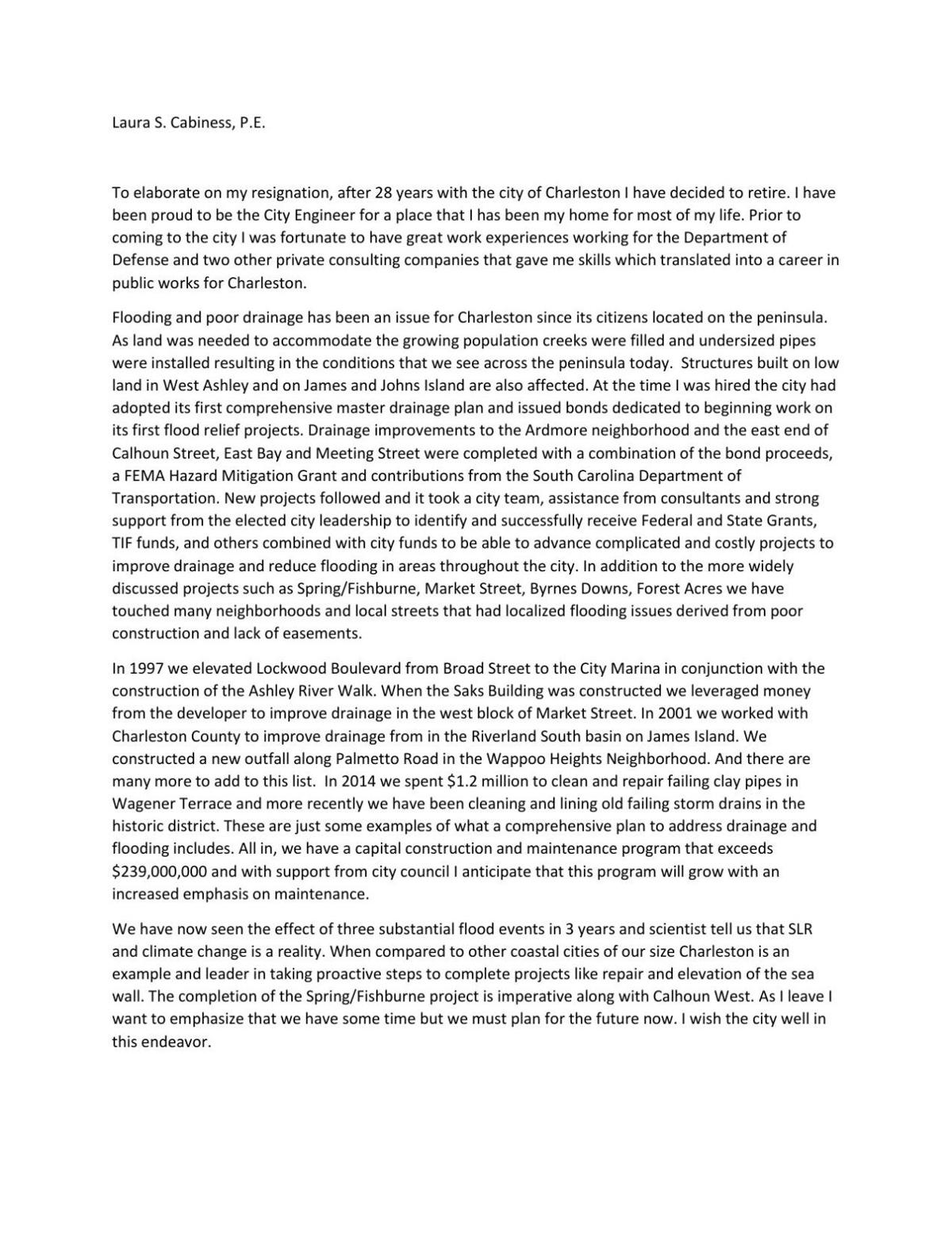 The city of Charleston has had drainage problems since its early settlers began filling in and building on creek beds. While the city has built some large-scale drainage systems to fend off water, many areas such as the medical district continue to flood in a heavy rain, especially when it falls during a high tide.

The problems followed the city as it expanded into other low-lying areas in West Ashley, James Island and Johns Island. Older communities' drainage systems were undersized or nonexistent, and the process for improving them has been ongoing since 1984.

In addition, however, residents have complained that the city's process of approving new developments' stormwater systems has been lacking, which has created problems even in new communities.

Cabiness has led many of the large drainage efforts such as the Spring-Fishburne deep tunnel system still under construction along the Septima Clark Parkway.

In a written statement, she recounted a number of other drainage projects she's worked on, including on Market Street and in the Byrnes Downs neighborhood.

While flooding has always been a challenge for Charleston, the region has seen three major floods and several smaller ones in the past four years. The city currently has 677 repetitively flooded homes, about a quarter of the state’s total and more than any other single community.

That has ushered in a wave of criticism from the community, and Cabiness hasn't always welcomed the scrutiny.

Last year, she told The Post and Courier the city hadn't calculated what all the planned flooding projects would cost. It turned out the city did have an estimate of $2 billion.

She has also defended the city's lack of regulations on fill dirt in floodplains, which the Department of Natural Resources later identified as a problem in an August report reviewing the city's floodplain policies.

Given the dual threats of rising seas and more extreme storms, Tecklenburg said it was time for flooding and drainage issues to be handled by a separate department. The change still must be approved by City Council, which will consider it on Nov. 13, Tecklenburg said.