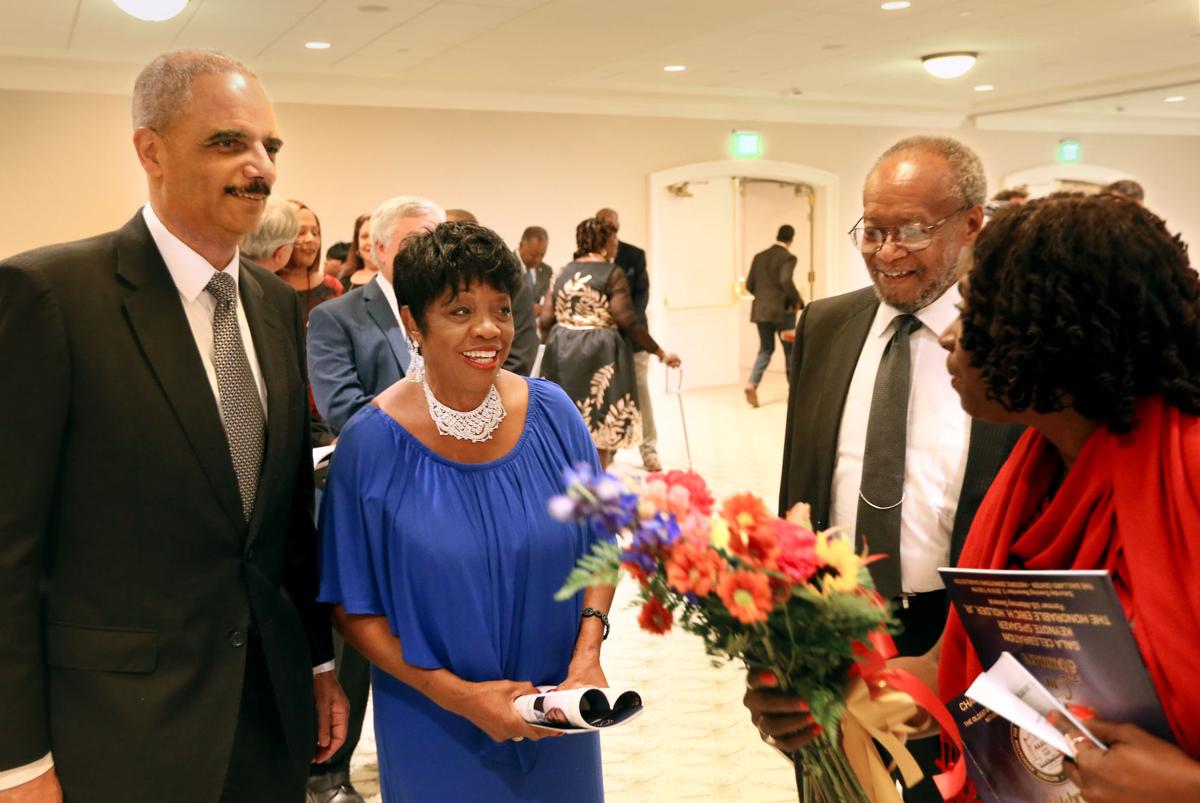 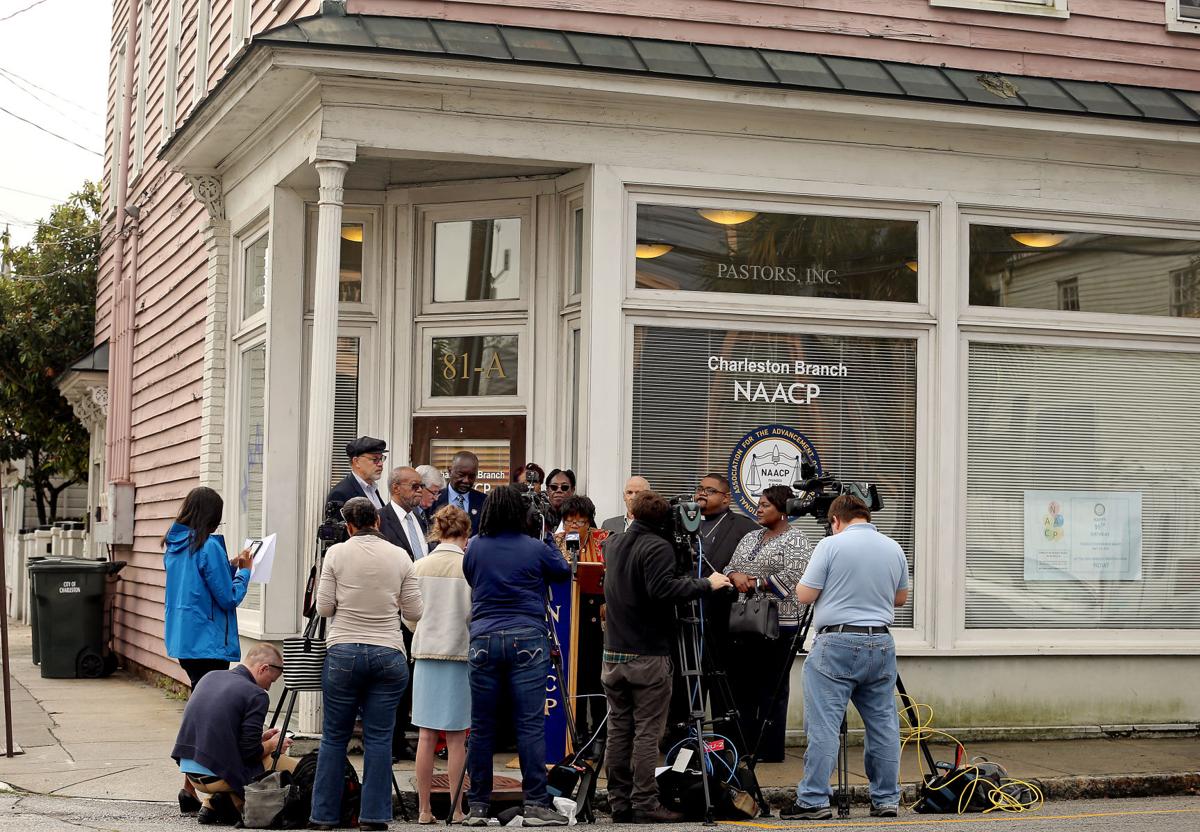 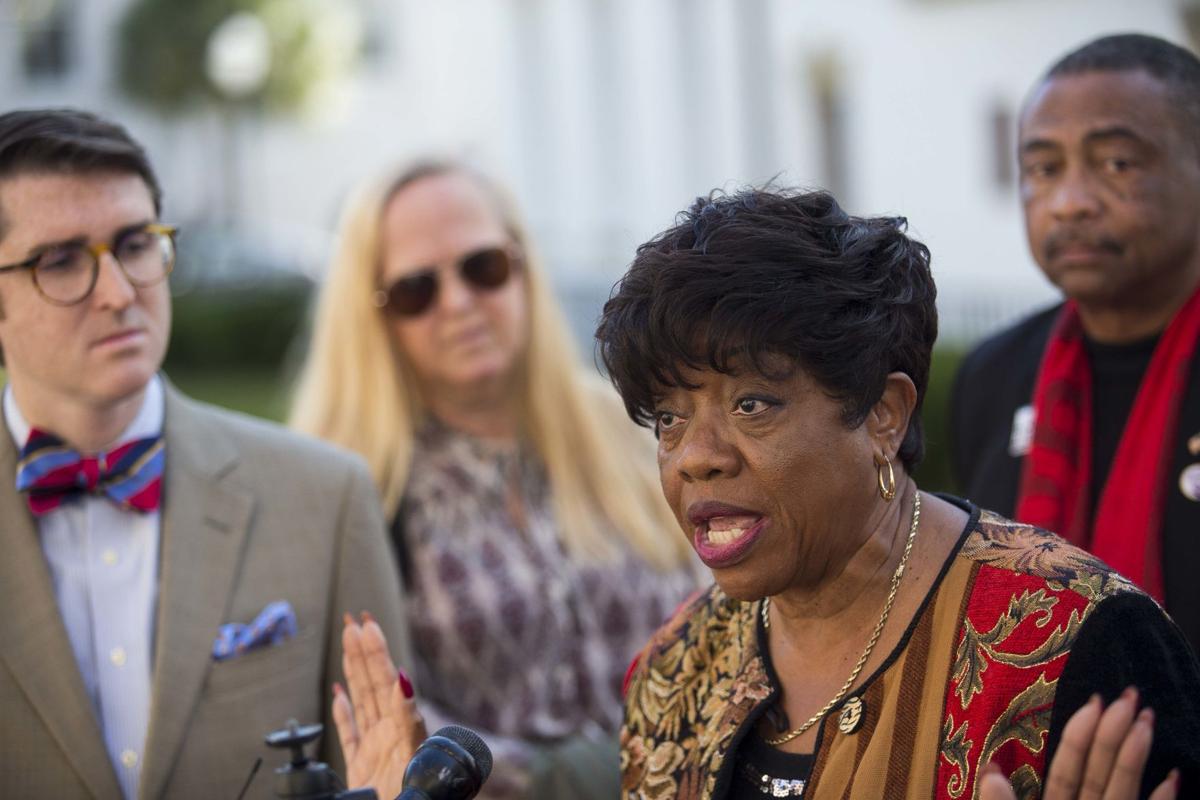 Dot Scott, president of NAACP Charleston branch, talks with media at the Charleston County Courthouse on Feb. 28, 2019, after a judge sided with a mother who sued the Secessionist Party of South Carolina after her children were photographed holding Confederate flag images and their pictures were posted on social media. The party was ordered to dissolve and pay $1,000 to the NAACP. File/Andrew J. Whitaker/Staff

Dot Scott has helmed the Charleston Branch NAACP for 21 years, often raising her voice against discrimination and racism. Now, as she steps away from the storied civil rights organization, she's thinking about the constant need to push for change, and the challenges in store.

Over the course of two decades, Scott raised the profile of the local NAACP branch, arranging many press conferences, sometimes on very short notice, and confronting political and civic leaders on issues that included public education, racism in the workplace, housing discrimination, gentrification and more. She was a major force behind the annual fundraising banquets, which regularly featured prominent national leaders such as Hillary Clinton, Julian Bond, the Rev. William Barber, Eric Holder and Joe Biden.

Some found her style abrasive, but Scott insisted that it takes a strong will and stiff backbone, especially if you are a Black woman, to call out injustice and corruption.

The public appearances are but the tip of a large iceberg, she said. Most of the time, she has quietly fielded phone calls — perhaps four or five every week — from people all over the Lowcountry complaining about mistreatment. Sometimes the grievances are well-founded, and Scott will strive to negotiate some kind of peace; other times she must explain how perceived wrongdoing is the result of economic forces indifferent to the struggles of her constituents.

When that happens, she expresses sympathy and tries to explain that there’s not much the NAACP can do, she said.

Her years as president of the Charleston NAACP constituted a second career. Her first career was with AT&T/BellSouth, where from 1971 to 2002 she served as a sales and service manager based in Charleston and as a corporate instructor. That latter post required frequent travel to various cities such as Birmingham and Charlotte and Baltimore.

Since the COVID pandemic began in 2020, she and her small staff of volunteers mostly have worked remotely. In March, the branch relocated from its office on Columbus Street in the East Side neighborhood to 117 Spring St. after its landlord, PASTORS Inc., decided to renovate the building.

The Charleston NAACP is 105 years old. One of the oldest branches in the country, it was founded eight years after the national organization got its start on Feb. 12, 1909.

In recent years, it has shared the domain of civil rights activism with a variety of other organizations, individuals and movements, including Black Lives Matter Charleston, the Racial Justice Network, the National Action Network, the Charleston Activist Network and United Front. Most are populated by young people whose activism was ignited by police and vigilante killings of Black people, such as Trayvon Martin (2012), Michael Brown (2014), Eric Garner (2014), Tamir Rice (2014), Walter Scott (2015), Freddie Gray (2015), Breonna Taylor (2020) and George Floyd (2020).

Scott, a 73-year-old North Charleston native and resident, said she hopes more young people will become involved in the branch’s activities but that she knows the NAACP’s structured, hierarchical approach doesn’t necessarily appeal to young activists.

“Young folks coming up, they want immediate leadership,” Scott said. They don’t always have the patience for mentorship and for waiting their turn. “It’s hard to make changes when young people don’t believe they have to follow the rules.”

Scott said she’s a proponent of the kind of activism that’s participatory. She wants a seat at the table. She relies on a common-sense approach. There’s a place for confrontation — for people on the outside to bang on the walls and shout through the windows — but too often that kind of protest is dismissed by the powers that be, she said. She doesn’t want to be on the outside looking in.

“You’re prejudged and ignored when your demands fail the pragmatic test and don’t align with reality,” Scott said.

Young activists have lost patience, said Daron Calhoun, Race and Social Justice Initiative coordinator at the College of Charleston’s Avery Research Center. The fight for social justice has been too incremental, with too many episodes of pushback and backpedaling.

“After Mother Emanuel, everyone said be patient,” he said, referring to the 2015 mass shooting that left nine worshippers dead. “We all said ‘No, we’re tired of waiting.’”

He and other young activists want Confederate monuments removed from college campuses immediately; they want buildings named for white supremacists to get new monikers; they want police reform now; they want an end to economic discrimination today.

So no more silent marches that keep out of the way, no more efforts to convince those who refuse to be convinced, he said. When you allow a racism and injustice to persist, you reinforce them. They become a norm that few seem willing to challenge, he said.

Tamara Butler, director of the Avery Research Center, said the generational divide is exaggerated. Every generation includes moderates and revolutionaries.

“We have to get past the argument that young people are the radicals and old folks are the pragmatists,” she said. “Our communities are more complicated than that.”

Some young people are good at logistics and strategy, some older people are good at talking loudly and hogging the limelight, Butler said. What’s needed among activists is dialogue that leads to hard questions about how organizations should function, what missions they should adopt, and how they can engage more participants.

“It’s not that young people don’t want to be involved,” Butler said. “It’s that people aren’t creating spaces for them where their talents and strengths can be expressed.”

What’s needed, she said, is the development of apprenticeship runways. Organizations too often don’t seem to have succession plans. They fail to identify strong leaders early, recruit them, nurture their talents and empower them.

James Johnson, president of the Racial Justice Network, said there’s room for all kinds of activism and all kinds of civil rights organizations.

“We need more people like Dot Scott to step up,” he said. “The environment today is very hostile; we need people to take her place. ... She did what she could do while she was there. She made her mark.”

The Charleston NAACP’s constituency has shrunk in recent decades as Black residents of the city move elsewhere, Johnson noted. Other NAACP branches, such as those in North Charleston and Goose Creek, have been taking on more of the load.

In growth-friendly Goose Creek, NAACP wants Black community to be part of the future

But there’s still a need for a NAACP presence in Charleston, he said. That’s where many of the institutions are located. That’s where public school officials work, where housing policy is formulated, where gentrification is having a big impact.

The Racial Justice Network has kept busy since Johnson founded it in 2020. It is active statewide and now has several youth chapters. It focuses on crime, discrimination, poverty and other issues affecting African Americans.

Johnson hopes to find opportunities for collaboration with other civil rights groups, he said.

The Rev. Joe Darby, first vice president of the Charleston NAACP branch, said Scott was instrumental in revitalizing the group when she became president in 2001. Membership was lacking; there was no branch office.

“There an old hymn in the Black Church, ‘May the work I’ve done speak for me,’” Darby said. “She’s been an excellent president.”

She has been at the forefront of big battles such as the removal of the Confederate battle flag from the Statehouse, and active in smaller ways, he said.

“She is relentless about the cause of civil rights,” Darby said. “And she has settled a lot of stuff without a lot of hue and cry. She’s done her work and she’s done it in a commendable manner.”

Although there has been a population shift on the Charleston peninsula, the need remains for a strong and vital NAACP presence downtown, he said.

First of all, the issues often are centered there, Darby said. The branch’s membership is not confined to the city. And, anyway, “you can’t run all the Black people out of Charleston.”

Darby said October’s monthly meeting will result in the formation of a nominating committee whose members will develop a slate of candidates for all of the branch’s positions, present it at the November meeting, and invite attendees to submit their own nominating petitions. (Anyone who has been a member for at least six months is eligible to throw his or her name in the hat.)

The Charleston NAACP will continue its work, Darby said.

“My personal hope is that maybe the branches will look at means of collaboration,” he said, adding that they need to make more room for young people. “Hopefully, there will be dialogue and cooperation going forward. It’s a good time for branches to sit down and look at how we do things.”

Officials worry that they could agree to spend $75 million now only to see a tax referendum fail later. Read moreCharleston County needs $75M and a sales tax hike to fund the Mark Clark Extension

A big feature is the aquarium and reptile center's coral conservation lab, which works something like a hospital for over 40 species of diseased coral colonies. Read moreColumbia's Riverbanks Zoo sets opening date for $32M aquarium, reptile center