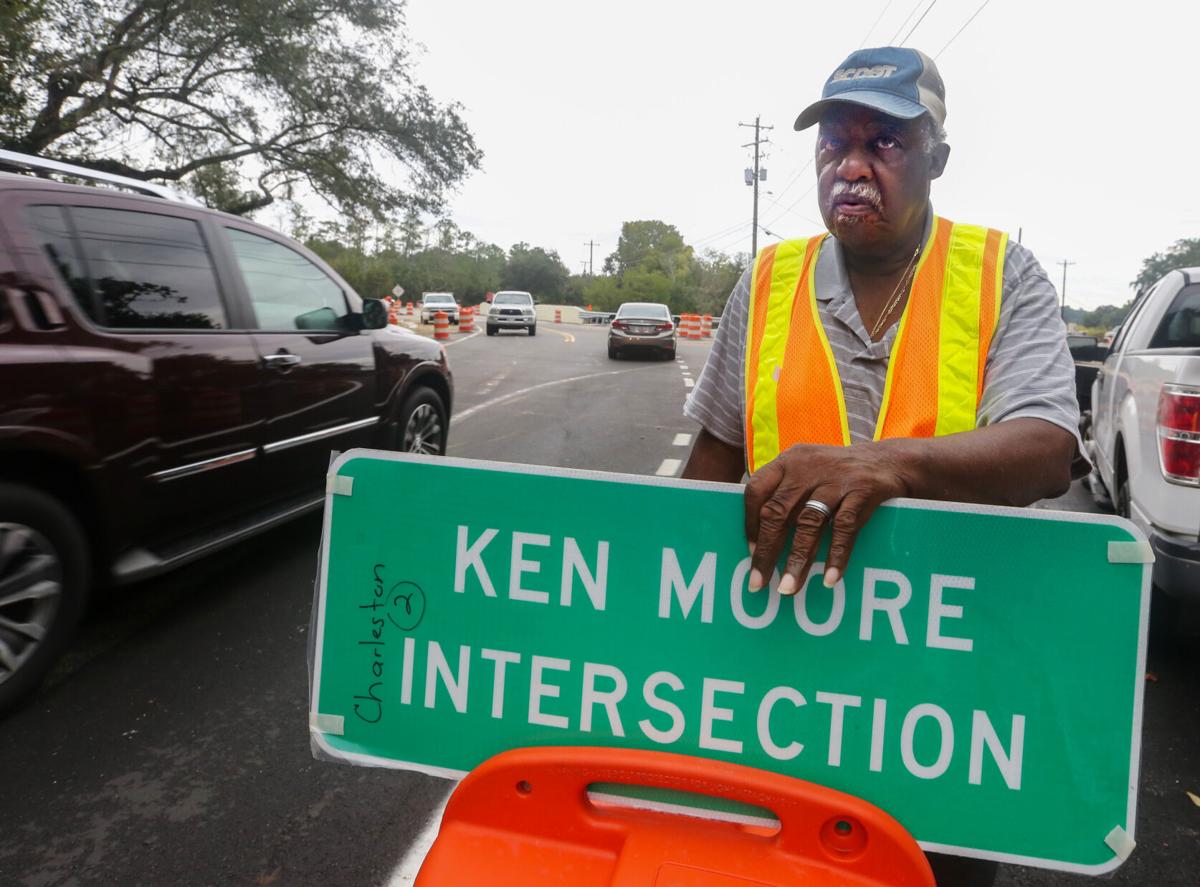 Ken Moore stands at the Riverland Drive and Camp Road intersection that recently was named the Ken Moore intersection by the South Carolina Department of Transportation. Moore saved five teenagers from drowning in Ellis Creek over 40 years ago and the DOT honored him for his actions. Brad Nettles/Staff 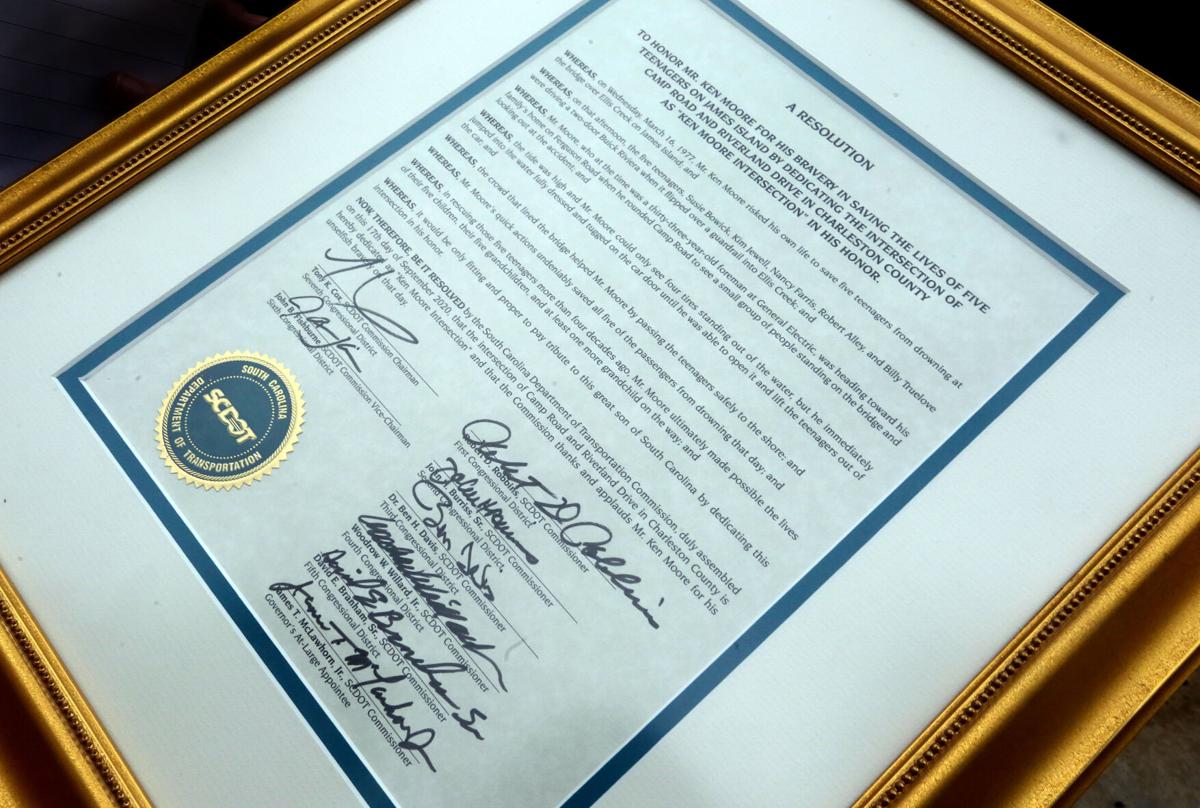 South Carolina Department of Transportation honored Ken Moore for saving five teenagers from drowning over 40 years ago in Ellis Creek by naming the Riverland Drive and Camp Road intersection to the Ken Moore intersection. Brad Nettles/Staff 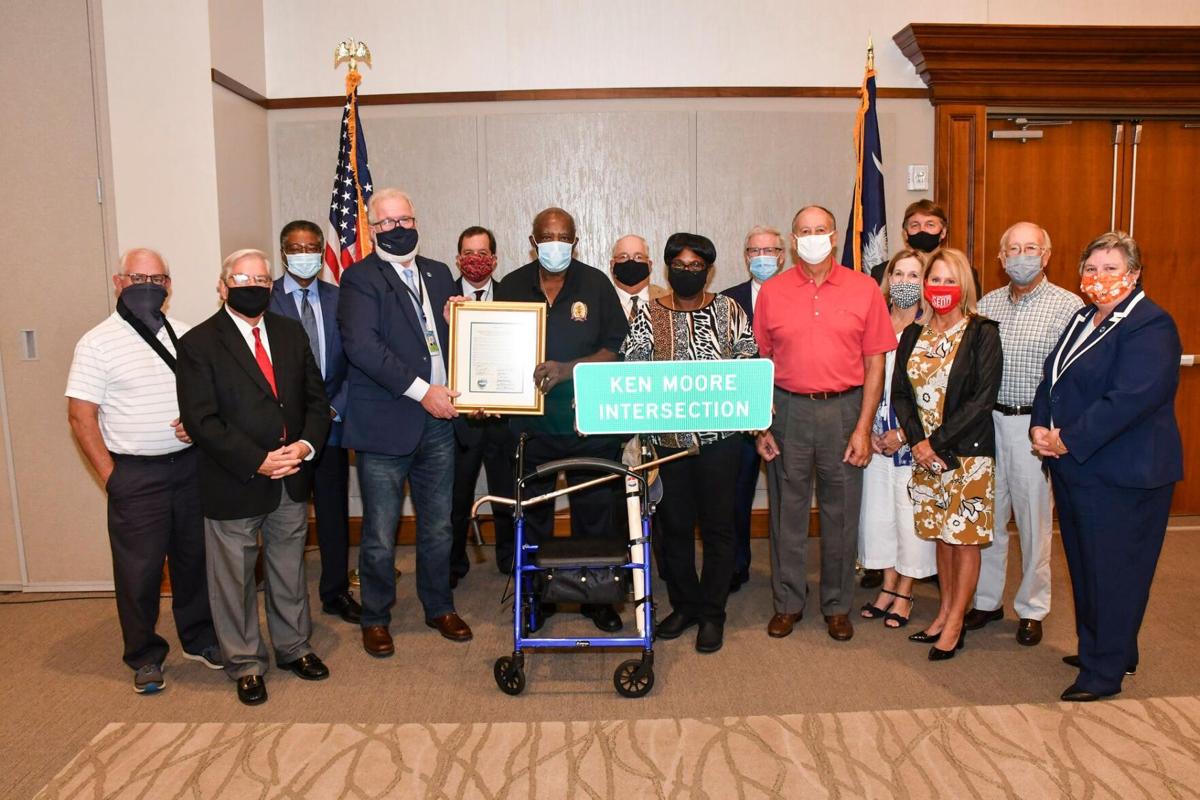 On Sept. 17, the state Department of Transportation honored Charleston resident Ken Moore for his lifesaving heroism in March 1977, when he saved five teenagers from drowning in an upside down Buick in Ellis Creek. SCDOT/Provided.

For a number of years, Ken Moore installed signs for the state Department of Transportation, but now one will be posted to honor him.

Moore saved five teenagers from drowning after a joyride on rural James Island roads went sideways in March 1977. A two-door Buick Riviera flipped over a guardrail on Riverland Drive and landed upside down in Ellis Creek during high tide.

While a crowd gathered, shouted for help and watched, Moore ran from his family's home on Ferguson Road and, without hesitation, dove into the water. The five teenagers — Susie Bowick, Kim Jewell, Nancy Farris, Robert Alley and Billy Truelove — survived.

Five lives nearly ended four decades ago when joyriding teenagers flipped over a guardrail into Ellis Creek near the intersection of Camp Road and Riverland Drive.

To honor his heroism, a number of people reached out to the state DOT asking that the Camp Road and Riverland Drive intersection be named for him.

The intersection is busy, even during off-peak times. Standing near the intersection this week with a gold cane in his right hand and an old SCDOT hat on his head, Moore kept a watchful eye as cars and trucks sped through the busy thoroughfare.

DOT workers were there, too, orange cones strewn about the busy intersection as trucks barreled down Riverland Drive and passenger cars with kayaks atop them made the turn onto Camp Road. Improvements are still underway and a sign that reads "Ken Moore Intersection" will soon be erected.

Moore was honored in a ceremony in Columbia on Sept. 17. His wife Una and a few friends accompanied him, as did Sen. Sandy Senn, R-Charleston, who made the request to name the intersection after him.

Robert Robbins, 1st Congressional District Commissioner to DOT, said this week there's two ways for a road or intersection to be named after someone, either a vote in the General Assembly or at the Commission level.

Citing the coronavirus pandemic and the "brevity" of the legislative session, Robbins said the commission opted to naming the intersection.

"We try to be selective but this gentleman displayed courage and bravery, coupled with his public service," Robbins said.

Moore made a point to wear his old SCDOT hat to the ceremony, too. Interestingly enough, Moore retired from the DOT as the lead manager of the sign crew.

For years, Moore wondered what happened to the five teenagers who survived that chilly March day. With some help, he connected with four of them and the family of the fifth. Truelove died in 1989 at the age of 29. He died in Dawsonville, Ga., according to The San Angelo Standard-Times.

Three, Bowick, Jewell and Farris, accompanied him at a Mass service at his church, the First Baptist Church of James Island.

Moore got answers to his questions. He learned that by saving the five teenagers, five children and six grandchildren lived, too.

Though he walks with a cane to assist him after a stroke last year, Moore doesn't let it stop him from his hobbies. His favorite is cutting grass and he thinks all lawns should look like a golf course. He volunteers to trim neighbors lawns because he takes so much pride in it.