If there's a time capsule in the base of the former John C. Calhoun monument, Charlestonians are closer to finding it.

The city has hired North Charleston-based Demolition Environmental Co. to raze the massive granite-and-concrete base at Charleston's Marion Square, the last piece of the monthslong dismantling of the controversial statue.

Calhoun, a congressman and vice president who died years before Southern states launched the Confederacy, is remembered as a fierce defender of slavery and, to some, a representation of the city's dark past as a hub of the slave trade.

On Tuesday night, City Council unanimously signed off on hiring DECO to demolish the base for $131,000. 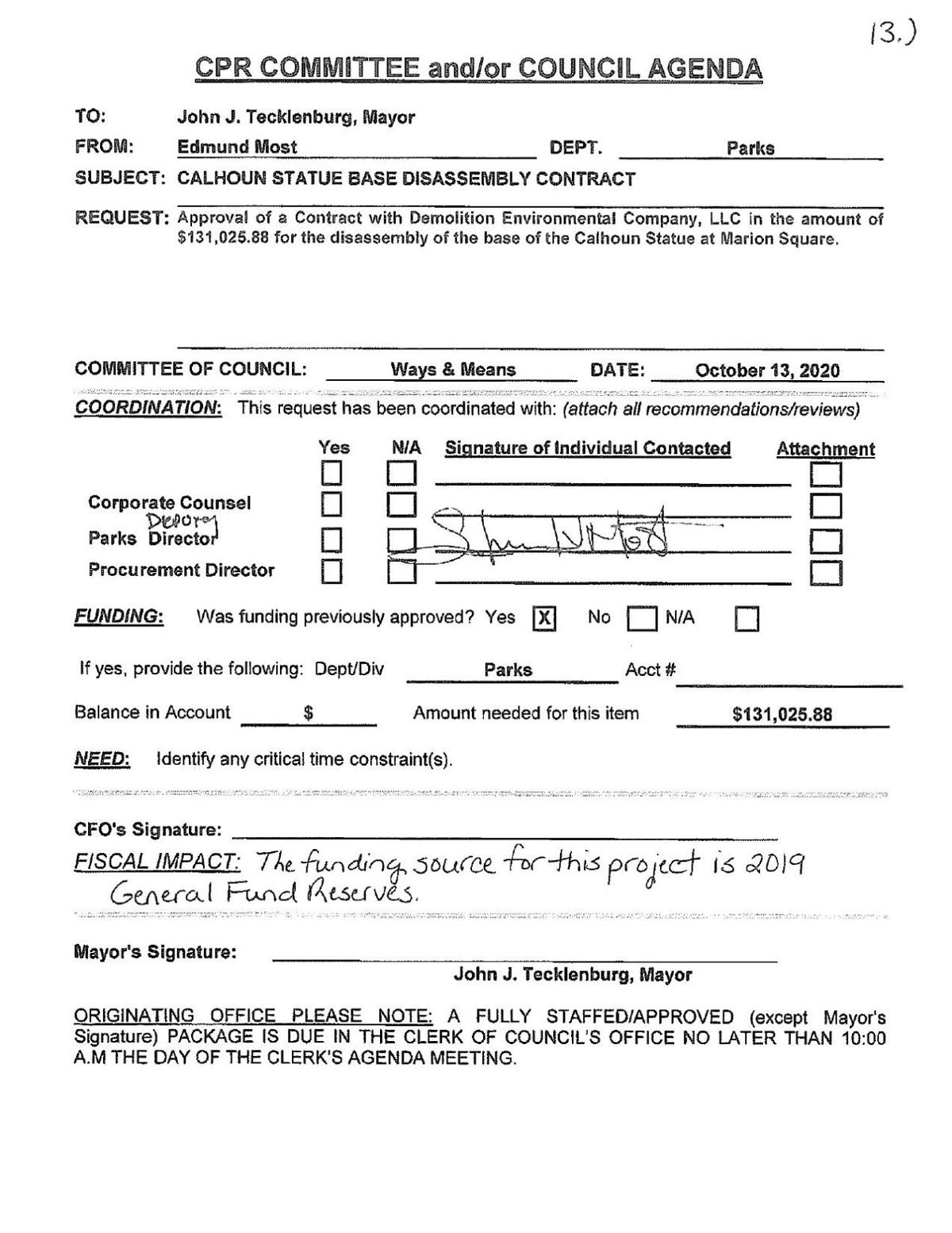 City staff also received a cost estimate for dismantling, salvaging the massive blocks and transporting them to a storage facility "approximately 4 miles from the site" for an additional $159,000, according to the contract agreement.

City Council approved the demolition and opted to not salvage the base.

City Parks and Capital Projects Director Jason Kronsberg said Wednesday a demolition date has not been set and staff hopes to hear back from DECO by the end of the week.

City officials don't know exactly where the capsule is because there aren't any construction documents of the monument — but they have a good idea where it might be.

It's believed to be in the northwest corner of the lower base of the monument, according to Kronsberg.

A Nov. 26, 1934, article in the Charleston News and Courier describes what may be inside the monument: "A cannonball recovered from the harbor which was supposed to have been used in the battle of Fort Moultrie; a case containing a banner which was carried by seamen in Calhoun's funeral procession, the banner bearing the words 'The children of old ocean mourn him'; $100 in Continental money; a lock of Calhoun's hair; Calhoun's last speech; and various lists of national and state officers and organization members."

It's unclear what kind of machinery DECO will use to avoid damaging the time capsule. A phone call and email to DECO on Wednesday were not returned.

On the fifth anniversary of the Emanuel AME shooting in mid-June, Mayor John Tecklenburg and nearly all City Council members announced the statue's removal.

For weeks leading up to the announcement, protests and a riot flared in the city.

It took a crew 17 hours on June 23 to remove the 12-foot figure of Calhoun that stood atop a towering column. The statue was affixed with epoxy and a metal pole to the base.

The statue is being stored by the city at an undisclosed location.

Officials initially planned to have it displayed at a museum, but so far, there have been no takers. At least one City Council member who initially supported the statue's removal said he regrets the vote because Calhoun's likeness is not being displayed. Councilman Harry Griffin said on social media he was "ashamed" that he supported its removal because he felt he was misled.

Just over a month after the statue was removed, a crew pulled down the massive granite column that perched Calhoun's likeness 124 feet above the city. The column's removal was delayed a day because of lightning strikes in the distance.

Calhoun monument's base may hide a time capsule. Charleston wants to find and preserve it.