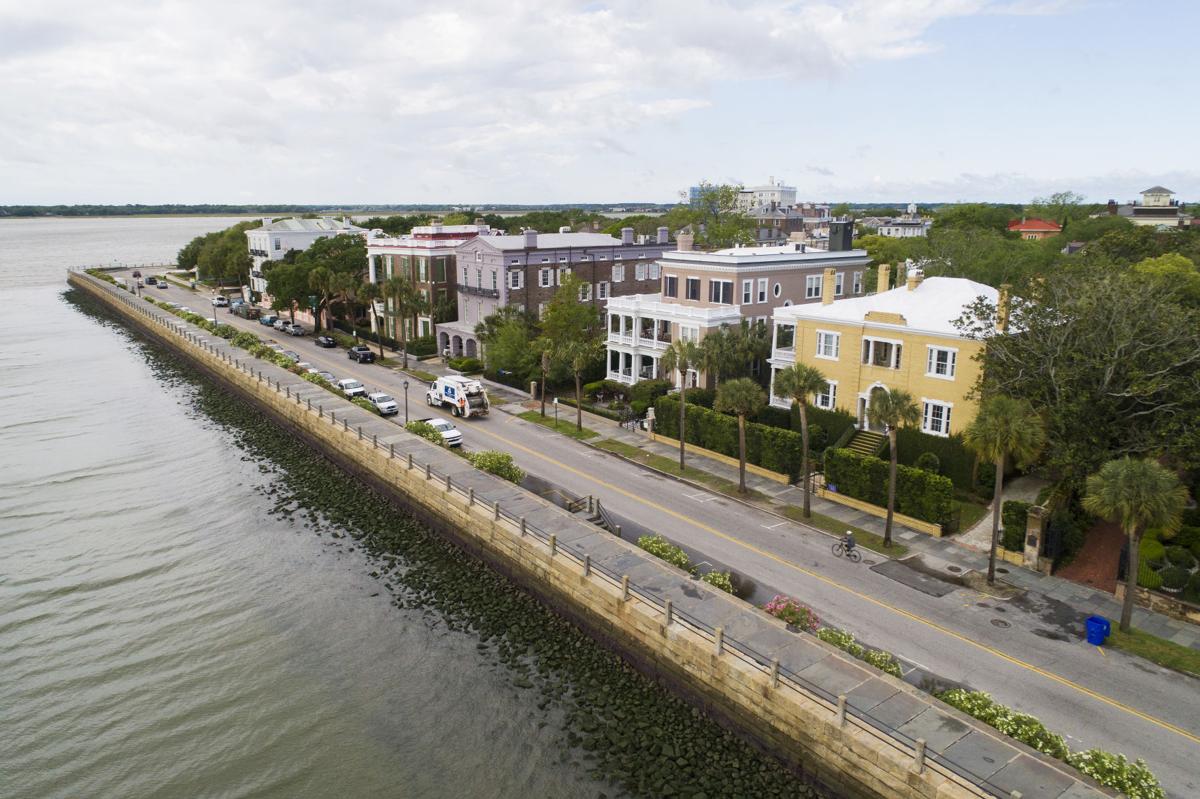 An aerial view of The Battery on Monday, April 20, 2020. Lauren Petracca/Staff 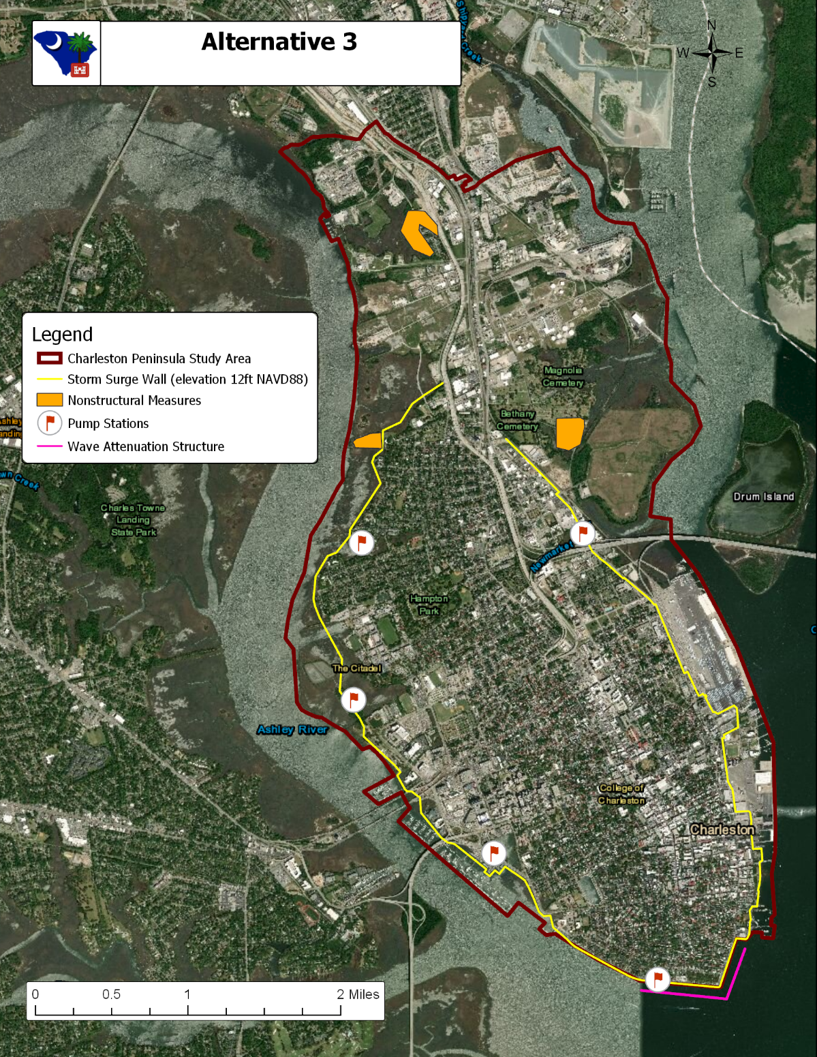 A graphic showing the tentative path of a flood protection wall around the Charleston peninsula, in yellow. The exact path may change. Army Corps of Engineers/Provided 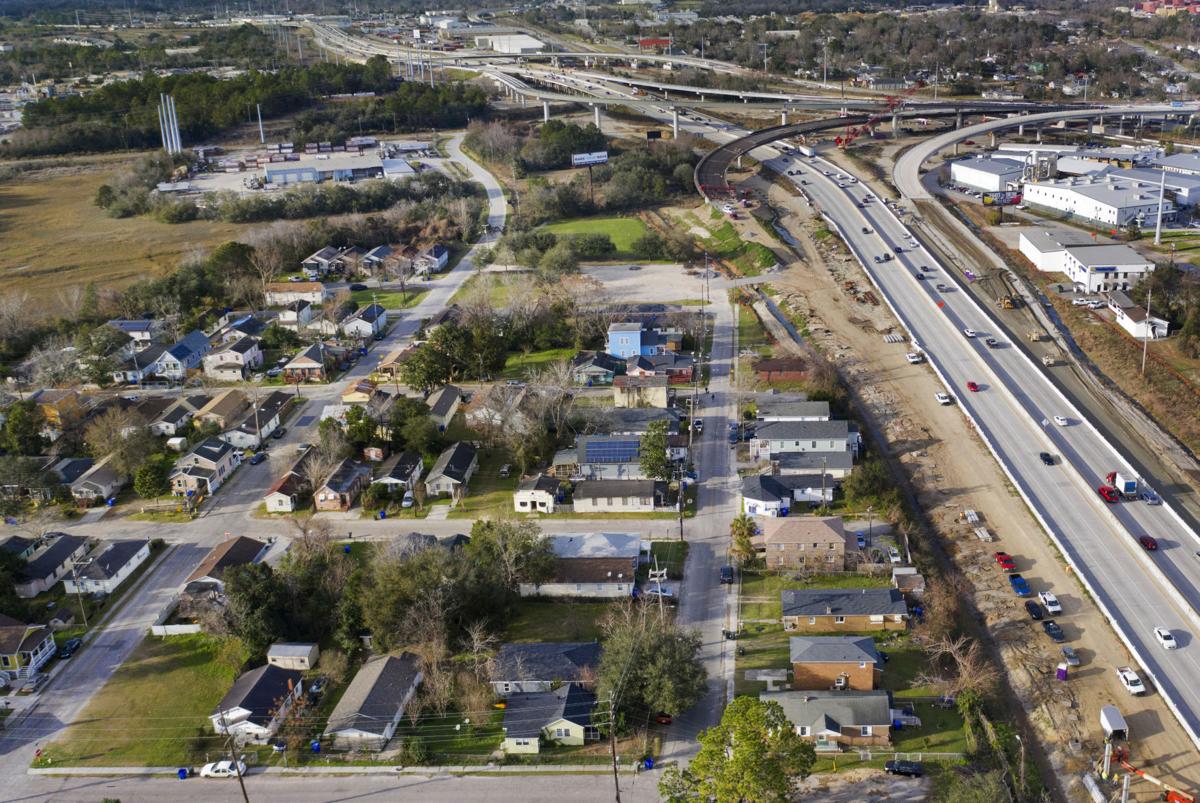 Traffic moves along Interstate 26 beside the Rosemont neighborhood on Jan. 23, 2020, in Charleston. File/Gavin McIntyre/Staff

The wall, part of a $1.75 billion plan by the Army Corps of Engineers to protect the Charleston peninsula, would wrap around most of the lower city, and could help with both tropical cyclones and higher tides from sea level rise. The city of Charleston would need to pitch in 35 percent, or about $600 million.

But in addition to standing behind those high-profile landmarks, the wall would give no protection to the low-income housing Bridgeview Village apartments or the Rosemont community, a small neighborhood that regularly sees its own flooding issues.

Instead, the Corps is suggesting "nonstructural" work at those two sites — which may mean buying out the properties and leveling them, or may mean preserving the homes by elevation, relocation or flood-proofing.

State Rep. Wendell Gilliard, D-Charleston, who represents the upper part of the peninsula, said the flooding protection needs to be inclusive of the lower-income residents of the Neck Area and other sites there.

"They should just go back to the drawing board," Gilliard said of the Corps' plan.

Gilliard tried to push for more accountability for graveyard owners after flooding in late 2018 prompted caskets in Monrovia Cemetery, along the Ashley River, to float out of their graves. That effort hit roadblocks, and now the site is outside of the wall path, about 1,000 feet north of where it would end.

The flood protection plan, the result of 18 months of study, will be refined over the next year and the path of the wall could still change. For it to actually come to fruition would take community buy-in, and an appropriation from Congress; City Council won't have to commit until fall of 2021, but even after then, the federal government may not decide to fund the plan.

As proposed, the wall would wrap around the peninsula starting north of the Wagener Terrace neighborhood, moving south along the Ashley River, tracing the path of The Battery sea wall, threading up the Cooper River side to Morrison Drive until stopping at about Mount Pleasant Street.

A new approach to prevent flooding? Flood walls popping up in Charleston

It's along the Cooper that the wall is placed behind some notable sites, including the aquarium, the under-construction African American museum and the ports facility. Spokeswomen for the port and aquarium said those organizations were still assessing the proposal, which was released Monday.

Former Charleston Mayor Joe Riley, the primary fundraiser for the African American museum, said the facility will be elevated 13.5 feet off the ground, which would be higher than the wall. He declined to comment further on the plan.

The full plan suggests not only a barrier to stop storm surge and severe tidal flooding, but also a 4,000-foot breakwater south of The Battery, pumps to move rainfall out of the enclosed perimeter and other measures in some areas outside the wall.

It's clear the barrier would also cut across several transportation routes: An estimated 40 gates for vehicle traffic, 20 gates for pedestrians access to areas like the Charleston City Marina and at least one gate to allow boat traffic in a tidal creek would be needed, according to the Corps' engineering analysis.

At its stopping point, south of Rosemont and Bridgeview, the flood wall melds into high ground, Corps spokeswoman Jackie Pennoyer said. It is designed to rise 8 feet above the point minor flooding begins but will appear shorter or taller than that in many places because of elevation changes on the ground.

Its ending points were "natural tie-in location(s)" because of ground elevation, Pennoyer said.

For a few unprotected flood-prone areas, including Rosemont and Bridgeview, the Corps suggests nonstructural options: elevating homes, floodproofing them, relocating them or buying them and tearing them down.

Nancy Button, president of the Rosemont Neighborhood Association, said the small community's residents would not want to relocate. Already, the elderly people who live there get daily offers to buy their homes because of new development nearby.

The Neck Area has recently seen a building boom, with a 133-acre housing tract in the works and high-rise luxury condos sprouting up. Those projects would not be behind the wall either.

Rosemont, meanwhile, has already been contending with one big infrastructure project: the new, nearby port access road that will help ferry cargo to and from the Hugh K. Leatherman Terminal in North Charleston.

The neighborhood, hemmed in by Interstate 26 and marshlands, is often forgotten, Button said. She worried about where else residents could find affordable real estate if buyouts happened.

"People are not going to sell their houses," Button said. "It’s almost like an insult to us, and they're doing all these things and they don't include us."

It's not a foregone conclusion that the Corps will ultimately push buyouts for Rosemont or Bridgeview, on the other side of the peninsula. The engineering group uses a complex rubric to decide between its four nonstructural options.

There have been some opportunities for public comment as the plan was developed. Pennoyer said the Corps did hold a meeting near The Citadel to solicit public input at the start of developing the plan, in January 2019, and that Corps members were also present at a flood preparedness meeting on Charleston's East Side in July.

Monday also opened a 60-day comment period for the public to send in their thoughts on the plan.