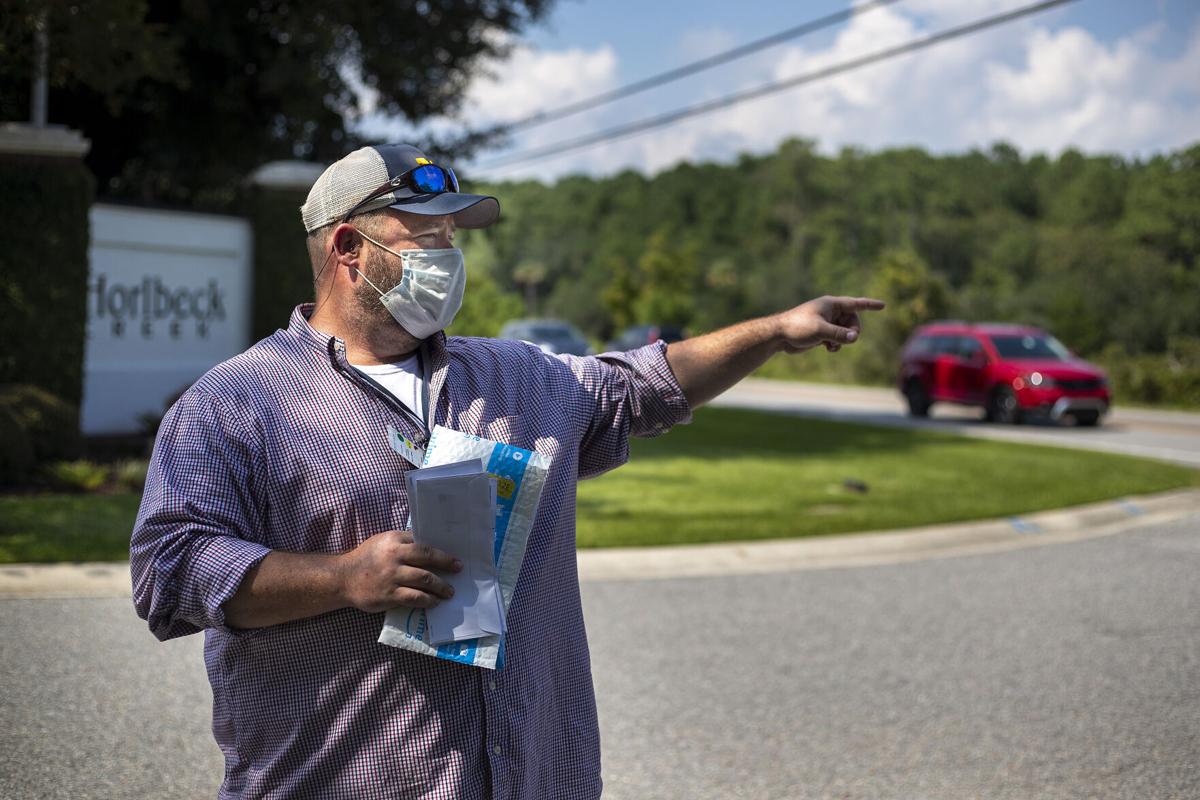 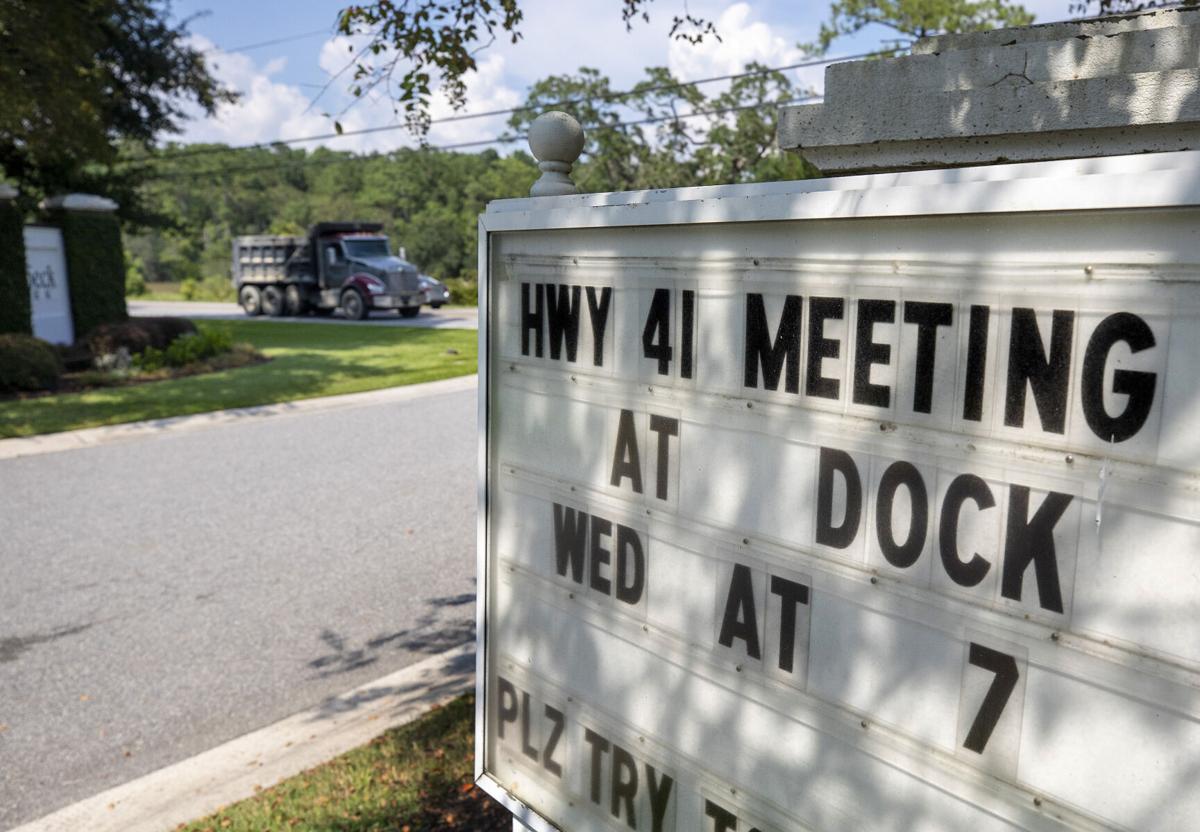 The Horlbeck Creek community is concerned about the plans to widen S.C. Highway 41 in Mount Pleasant. Grace Beahm Alford/Staff 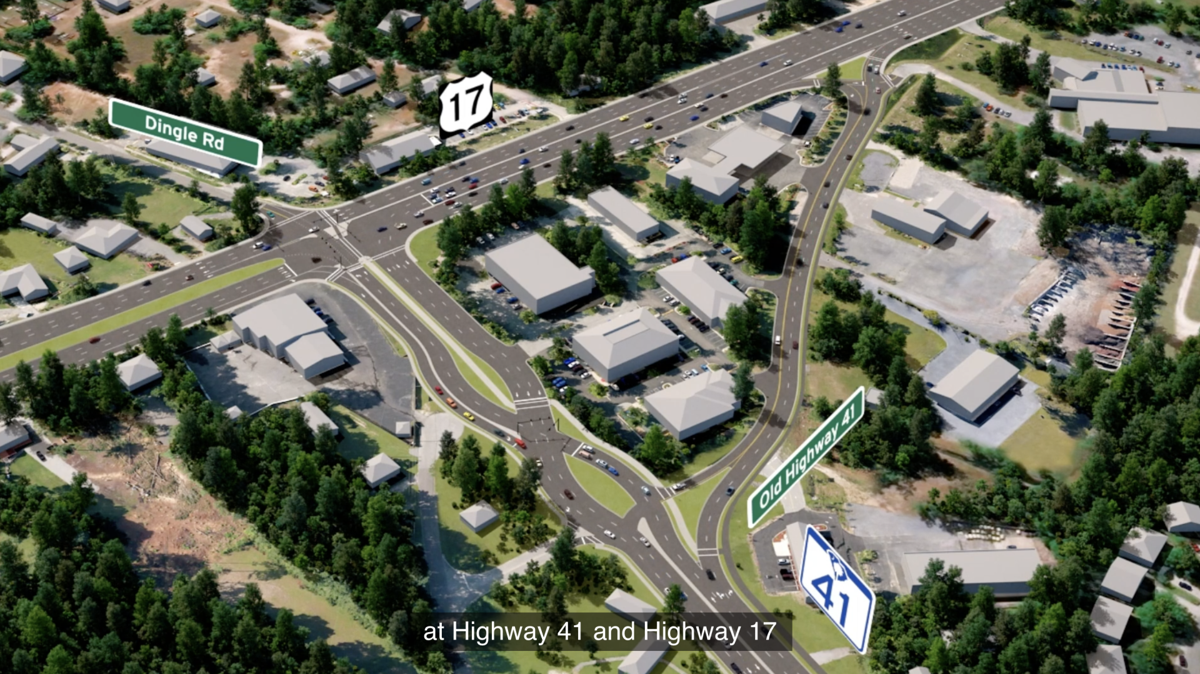 A rendering of the proposed intersection of S.C. Highway 41 and U.S. Highway 17 in Mount Pleasant, from Charleston County's online presentation. Provided

MOUNT PLEASANT — The Phillips community is not the only neighborhood along S.C. Highway 41 where residents are upset about Charleston County's $125 million plan to improve traffic.

The county's own analysis of the road-widening plan known as Alternative 1 shows that morning traffic for Horlbeck Creek residents would be worse after the road project is completed than if no changes were made.

The 84-home subdivision's intersection road adjoining Highway 41, Tradewind Drive, would get a failing "F" traffic grade in both the morning and the evening after the planned road-widening.

"I just had more faith in the government," said Horlbeck Creek homeowners' association leader Colleen McConnell. "We're just getting the worst bag of crap because we're getting an 'F'."

Residents of the small Cardinal Hill subdivision nearby have a similar concern, as do residents of the African American settlement community 7 Mile, which will be impacted by a part of the Highway 41 plan that will widen U.S. Highway 17 and redesign the intersection of the two highways.

“Right now there’s a six-lane road through the Seven Mile community, and it’s going to be 10 lanes," said George Freeman, speaking for 7 Mile and the Community Action Group for Encouragement. “The African American communities are tired of carrying the burden for road-widening projects in Mount Pleasant."

Freeman noted that earlier road projects, including construction of Hungryneck Boulevard and the widening of Highway 17, went through African American communities that date to the late 1800s.

Horlbeck Creek and Cardinal Hill are affluent majority-White subdivisions, and residents there also believe their needs are being sacrificed to appease residents of the much larger subdivisions Dunes West, Park West and Rivertowne.

"There are those of us who have not created the (traffic) problem, but we are taking the brunt of it," said Cardinal Hill resident John Thompson, who moved there 27 years ago.

"It's a classic case of picking on the smaller communities," said Thompson's wife, Hope Thompson. "I do think the people who are suffering are the ones in Phillips, Horlbeck Creek and Cardinal Hill."

Under the county's plan, residents of both Horlbeck Creek and Cardinal Hill would no longer be able to make left turns onto Highway 41. Instead, they would have to go in the opposite direction and eventually make a U-turn.

Ken Burkine lives in Horlbeck Creek, closest to Highway 41, and said making a right turn out of the subdivision is already difficult and dangerous. He expects it will be more so if lanes are added to the road as proposed.

"Due to the low volume of cars exiting Horlbeck Creek during peak hours, a (traffic) signal was not warranted for the neighborhood," said county spokesman Shawn Smetana.

He said traffic from the community that needs to turn left will be able to make U-turns at a new traffic light planned at Colonnade Drive, and that the "F" level of traffic "will only be experienced during peak periods of the day and are not expected to exceed a range of one to two minutes per vehicle during those peak times."

The county's traffic analysis says that if no work were done on Highway 41, the morning delay leaving Horlbeck Creek would be less than 30 seconds in 2045. But with the planned work, it would triple to 90 seconds. However, similar delays during evening rush hour would be much shorter than if no road work was done.

Plans to widen S.C. Highway 41 would leave the Horlbeck Creek subdivision with worse traffic in the morning than if no road improvements were made, Charleston County's studies show.

Residents of the smaller communities are quick to point out that the large subdivisions along Highway 41 came later and created much of the traffic that Charleston County plans to spend $125 million to relieve. An alternative road plan, which would have diverted traffic through Park West and Dunes West, has faced opposition from the subdivisions and from the town of Mount Pleasant.

"We've been here for 22 years, when you could skateboard on Highway 41," said Horlbeck Creek resident Jan Van Vliet. "All we are asking for is a safe exit and entrance to our neighborhood."

Plans to improve traffic on Highway 41, currently a two-lane road in most places between U.S. Highway 17 and the Wando River, have been contentious for years because there will be winners and losers. Some will get better traffic, others worse, and dozens of property owners will lose land for the road project, depending on which plan is ultimately chosen.

"We understand that with 84 homes, c'mon, we don't stand a chance," McConnell said. “We asked for a roundabout, we asked for a traffic light, and they pooh-poohed those things right away.”

McConnell said the county should consider turning the existing two-lane Highway 41 into a frontage road, from Highway 17 to Bessemer Road, and building a new road to Highway 17 on the north side of that.

Freeman also thinks there's a better plan for Highway 17 — a connector road from Highway 41 to Long Point Road that would run through the edge of Boone Hall Plantation and between Highway 17 and subdivisions including Brickyard Plantation. Such a plan has appeared in Mount Pleasant's long-range traffic plans for years.

“All they have to do is realign 41 and implement the plan that’s been on the books for a decade," Freeman said. “It’s a racial issue, but nobody wants to talk about the elephant in the room."

Charleston County evaluated more than a dozen plans for Highway 41 during the past several years, and Alternative 1 was chosen as the preferred plan in August. The county is not considering other alternatives now, but that could potentially change if Charleston County Council or the Army Corps of Engineers rejects Alternative 1.

Like many subdivisions in Mount Pleasant and elsewhere in the Charleston Metro Area, Horlbeck Creek has just one road leading in and out and is not connected to neighboring developments.

At the back of the subdivision there's a walking path that connects Horlbeck Creek to the much larger Brickyard Plantation neighborhood, leading from a cul-de-sac in one community to one in the other.

A road connection there would give residents of both communities new ways to access highways 17 and 41, and Mount Pleasant's long-term plans endorse such connections between communities to improve travel, but McConnell thinks that's unlikely to happen.