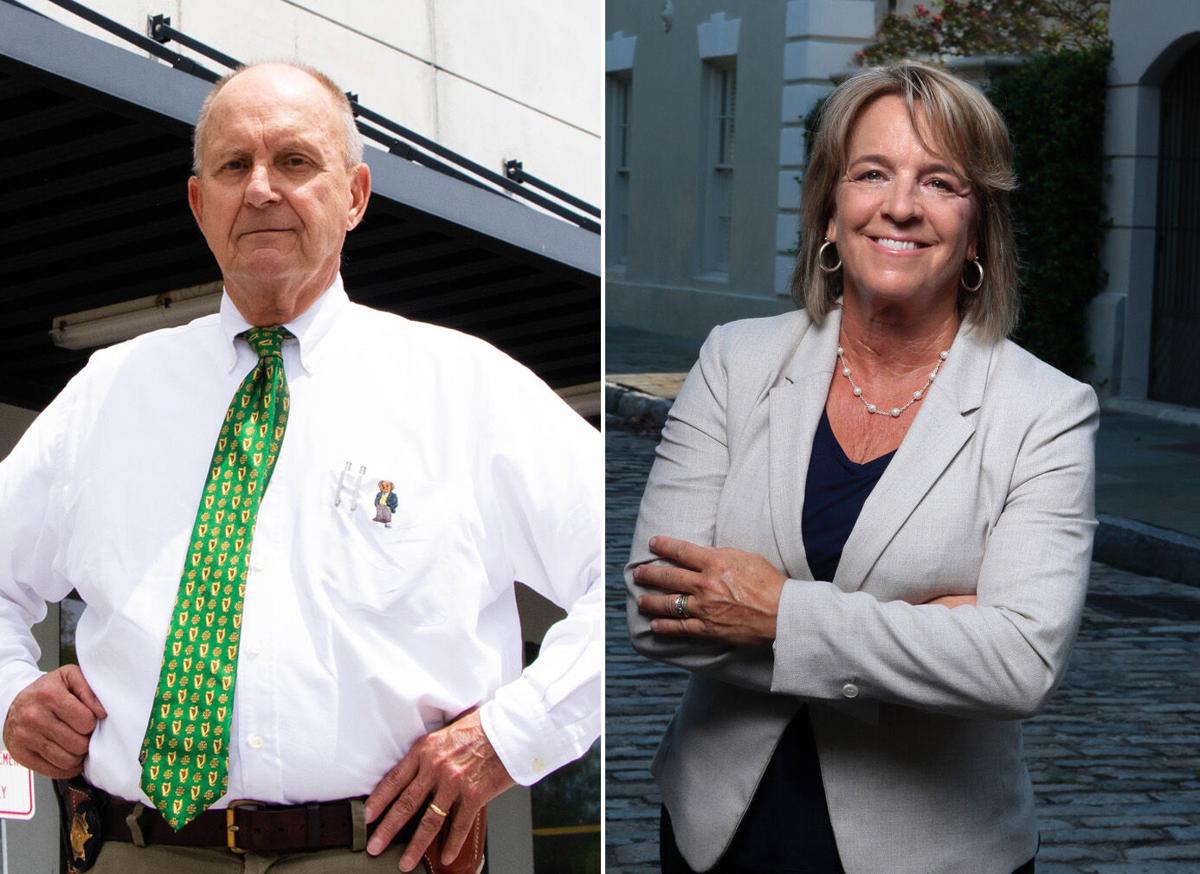 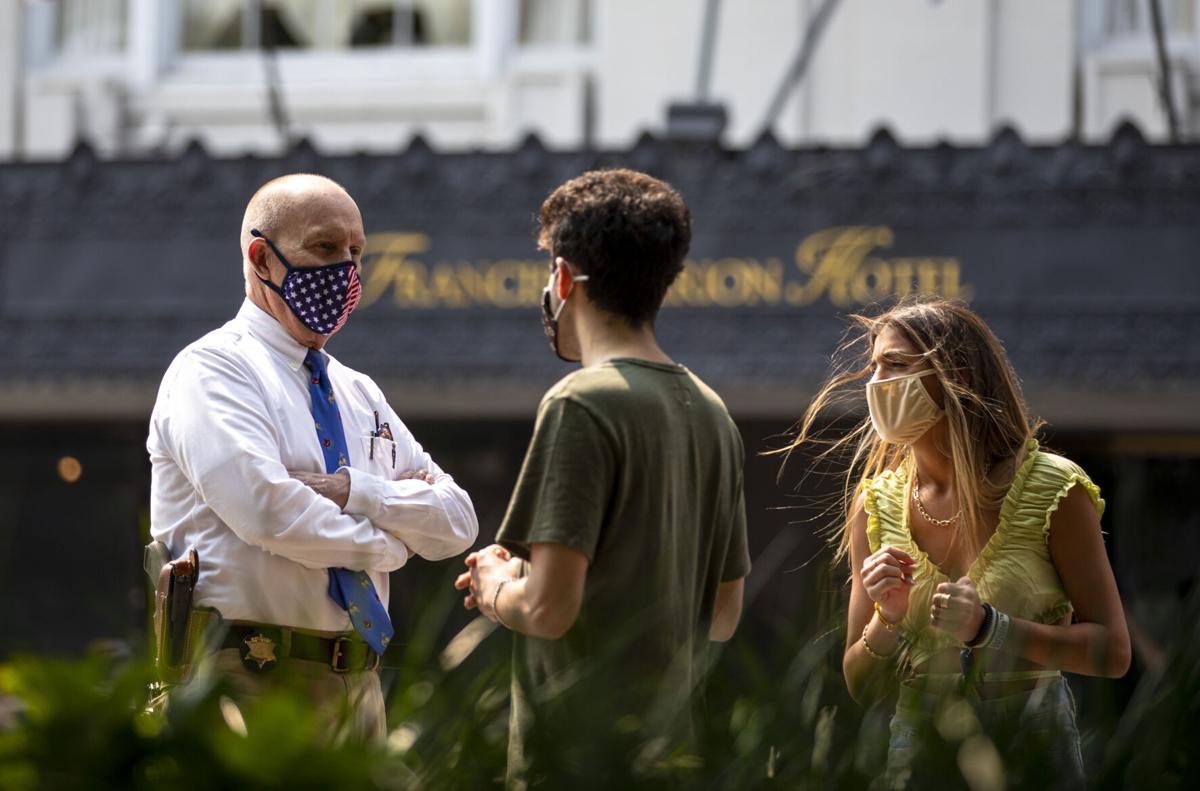 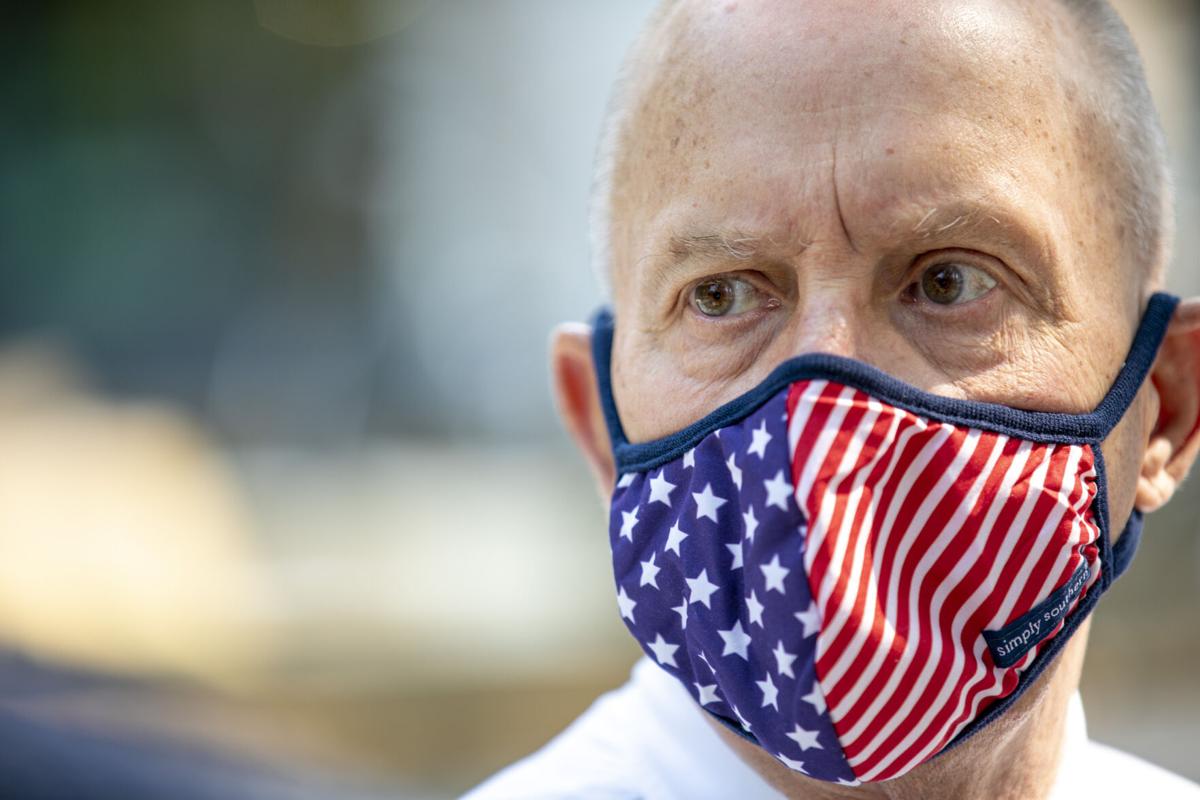 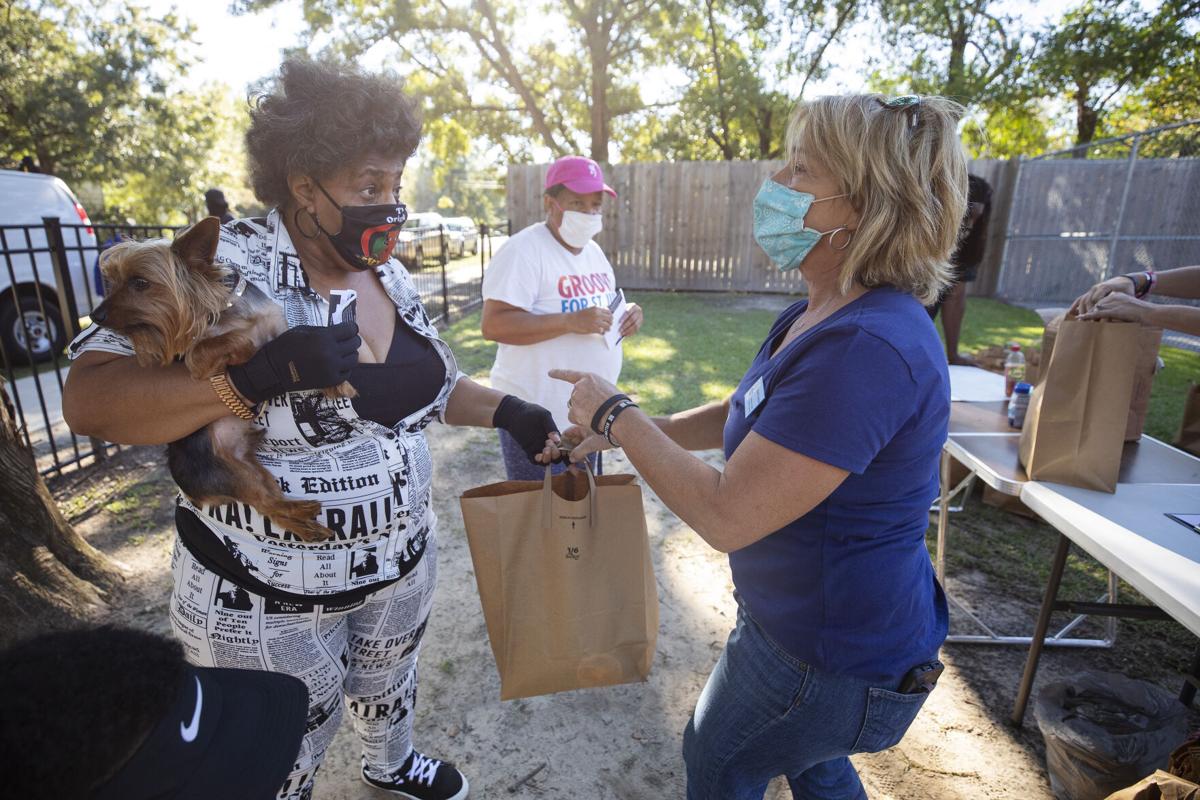 Kristin Graziano, the Democratic Party candidate for sheriff, hands out free food and helps voters register during an event run by the nonprofit Take It To The Streets in Waylyn Park in North Charleston on Wednesday, Sept. 30, 2020. Lauren Petracca/Staff 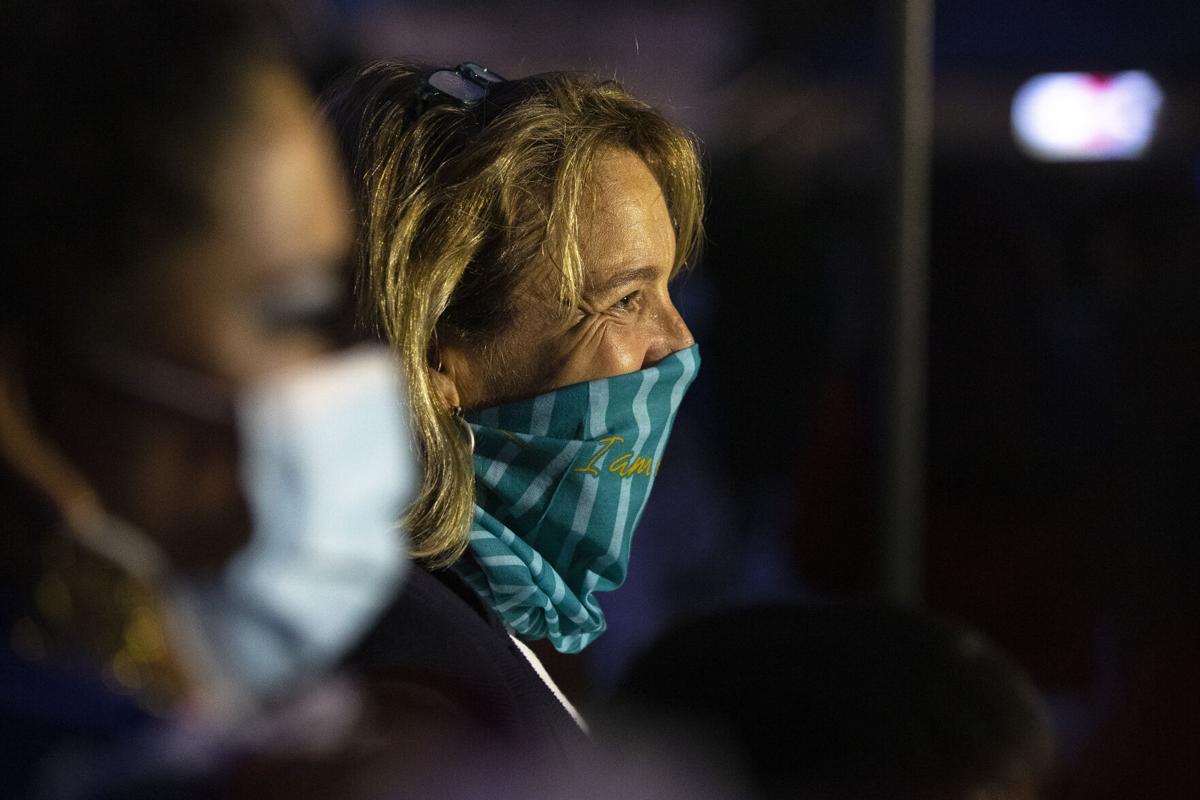 Kristin Graziano, the Democratic Party candidate for sheriff, hands out free food and helps voters register during an event run by the nonprofit Take It To The Streets in Waylyn Park in North Charleston on Wednesday, Sept. 30, 2020. Lauren Petracca/Staff

For the first time in more than 30 years, Charleston County Republican Sheriff Al Cannon faces a major challenger at the ballot box.

With nationwide protests fueling calls for police reform and law enforcement agencies grappling with public distrust, his opponent, Democrat Kristin Graziano, 52, is campaigning on a platform of transparency and accountability she says is needed to build bonds with minority communities and correct years of mismanagement.

The longtime deputy most recently served with the Sheriff's Office SWAT team. Cannon, 74, placed his Democratic rival on unpaid administrative leave in February after finding out she was preparing to run against him. If elected, she'll be the first woman to serve as a sheriff in South Carolina.

Cannon said he's leaning on long experience in law enforcement and a track record of leading the Sheriff's Office through periods of transformation that have turned it into the dynamic agency it is today, with operations ranging from cybercrime to anti-terrorism.

Since first winning his seat during a 1988 special election, the sheriff presided over the agency's merger with the now-defunct county police department in 1991, a $100 million jail expansion in the 2000s and an ongoing overhaul of the county's criminal justice system through the Criminal Justice Coordinating Council.

He also touted his ongoing role in shaping criminal justice initiatives on a national level, including his involvement with the Presidential Commission on Law Enforcement and the Administration of Justice, where he is a member of a working group exploring how developing technologies such as encryption and artificial intelligence are impacting law enforcement.

"I have spent much of my adult life building the Charleston County Sheriff's Office ... with a lot of help into a highly regarded, highly respected organization," he said. "It takes a tremendous amount of training and experience. It requires someone who has experience dealing with issues on a much higher level than on the street."

Graziano argues that sweeping changes are needed to correct a multitude of what she sees as issues with the department, including lack of diversity and a need to build bonds with Black and Brown communities.

But the men and women tasked with policing those residents are overwhelmingly White, especially farther up the chain of command, Graziano said.

"Our community is broken right now and it's been broken for a while," she said. "These protests are not going to stop until we do something, until we show that we're accountable to the public. We have to look in the mirror and we need to accept our part in this."

Cannon began his career in law enforcement in 1971 and is widely credited with modernizing the Sheriff's Office.

His $64 million budget eclipses those of many local governments. Charleston County is South Carolina's seventh-largest county geographically and its third most populous.

"Al is one of the most respected, if not the most respected, sheriff in the entire state," Condon said. "We’re lucky to have him. Al has a heart. He really is someone that cares about people. He’s a public servant. His record just speaks for itself."

If reelected, Cannon said he'll be able to conclude major projects, including construction of a new juvenile detention center that will replace the current facility that's come under scrutiny over its conditions.

The juveniles housed there have since been moved to the nearby adult jail, where conditions are better.

Cannon said he'll continue work being done through the Criminal Justice Coordinating Council, which operates as an independent body made up of the Sheriff's Office, police, court officials, mental health professionals and others.

Although the council has been around since at least the 1980s, the sheriff said it lay dormant for years until 2014, when he gave the green light to pursue a $2.5 million grant through the MacArthur Foundation that allowed it to hire staff and begin work on decreasing the inmate population at the jail.

Since then, the council's work has expanded into initiatives including providing public defenders in bond court, directing officers and deputies to issue citations rather than arrests for low-level misdemeanors, and establishing a stabilization unit for people in mental health or addiction crisis as an alternative to jail.

It received an additional $2.46 million grant in 2018 and work is underway to fully fund the council with local money, Cannon said.

Cannon pointed to people like Eric Watson, who rose to the rank of chief deputy before he was named deputy administrator of Public Safety for Charleston County earlier this year, and Lt. Rita Avila, who was named a White House Fellow in October last year.

Cannon's time at the helm of one of South Carolina's largest law enforcement agencies has not been without controversy.

In 2012, for example, he was charged with misdemeanor assault after acknowledging that he slapped a handcuffed suspect in the face following a high-speed chase. Cannon entered a pre-trial intervention program.

The sheriff has come under increasing fire for his participation in a federal immigration enforcement program known as 287(g).

Under the program, the Al Cannon Detention Center in North Charleston — named after him by County Council in 2010 — is used as a temporary stop for undocumented immigrants who face federal immigration proceedings.

The Sheriff's Office holds them at the jail on behalf of U.S. Immigration and Customs Enforcement until they're moved again and appear before an immigration court.

As immigration debate boils, Charleston heats up as a 'robust' detention point

The federal government pays the Sheriff's Office $55 per immigration detainee per day, but Graziano and other critics say the program costs Charleston County taxpayers millions of dollars a year because federal payments only cover 41 percent of the cost of housing the detainees.

They also argue that cooperating with ICE is doing irreparable damage to the Sheriff's Office's relationship with the community.

"I'm not in favor and I would not cooperate (with ICE)," Graziano said. "I would immediately rescind it for nonviolent immigration detention. It contradicts the efforts that I want to do in our communities. It is racial profiling."

Cannon, meanwhile, contends that his agency only detains undocumented migrants who face substantial criminal charges in addition to immigration-related violations.

Graziano began her law enforcement career in Charlottesville, Va., in 1988. She was called to her career after her younger sister was kidnapped. Graziano was 13 at the time.

"That's the moment that I said I'll never let another family go through what we went through," she said.

Five days passed before two Charlottesville police officers found Graziano's sister at a park. Those two officers would go on to serve as Graziano's partners when she joined their department 10 years later.

While in Virginia, she trained on active shooter response for schools following the Columbine High School shooting; founded a bike patrol unit in her department; and served on the board of Offender Aid and Restoration, a nonprofit with branches statewide in Virginia that works on restorative justice initiatives.

Pat Smith, the nonprofit's former executive director, said she got to know Graziano during the six years the then-Charlottesville police officer served on her board.

Graziano worked on initiatives like establishing an alternative drug court during her tenure on the board, she said.

Graziano came to Charleston County in 2002 and has worked a variety of assignments over the years, from patrol and court security to serving on the SWAT team and as a school resource officer. She’s also owned fitness businesses, coached rugby and served as a hospice volunteer.

If elected, Graziano said she would immediately move to conduct racial bias and financial audits of the Sheriff's Office.

She pointed to an inmate benefit fund that was the subject of a Post and Courier investigation published last month.

Charleston jail has fund meant to help inmates. Who benefits is not always clear.

The story detailed that while most of its recent profits went toward inmate services like drug and alcohol counseling and jail chaplains, hundreds of thousands of dollars were spent to equip and train a special team of detention deputies who handle jail fights and potential inmate uprisings.

"We have to be good stewards of the money we have," Graziano said. "The inmate welfare fund is a perfect example. I don't understand why (we're) buying ammo, guns ... I'm not sure how you can justify how that benefits inmates."

The newspaper also found the fund hadn't been audited in 19 years.

Cannon and his staff attributed the discrepancy to an oversight and said work is underway to correct that issue. The sheriff also said his agency employs an internal auditor, uses a county auditor as well, and that no money from the inmate fund was used to benefit himself or any other office employees.

The money used to set up a special operations group at the jail has been successful in reducing violence among inmates, the sheriff said.

"I don't know if you can find anything that's more appropriate," Cannon said.

Regarding a racial bias audit, Graziano said she believes the law enforcement community is at a critical time for reform.

North Charleston city officials recently approved a similar probe of their police department that expected to begin in the coming months.

Conducting a racial bias audit would give the Sheriff's Office the tools it needs to continue improving, Graziano said, adding that she'd establish a truth and reconciliation council to work with the community on an audit's findings.

The veteran deputy also said she wants to increase diversity in the Sheriff's Office, particularly among senior leadership, which currently is all White.

Cannon contends he's worked hard to promote diversity in the ranks and in leadership positions.

He pointed to Watson, who is Black, and Avila, who is Latina as two examples of promising deputies who've been given the tools to succeed at a high level under his tenure.

But Graziano argues there's more to be done.

"Thoughtful, impactful, transparent leadership is essential going forward," she said. "I'm more than qualified. I've been boots on the ground 30 years serving my community. This is something I care deeply about."