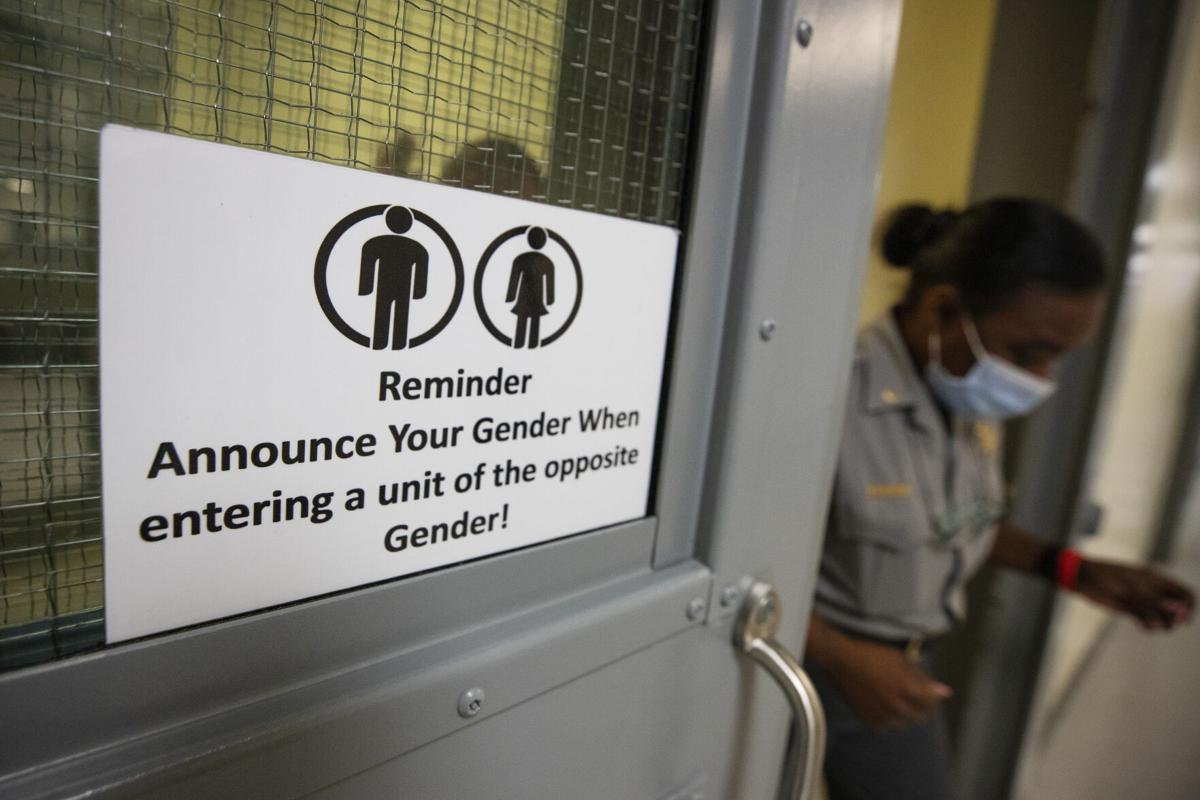 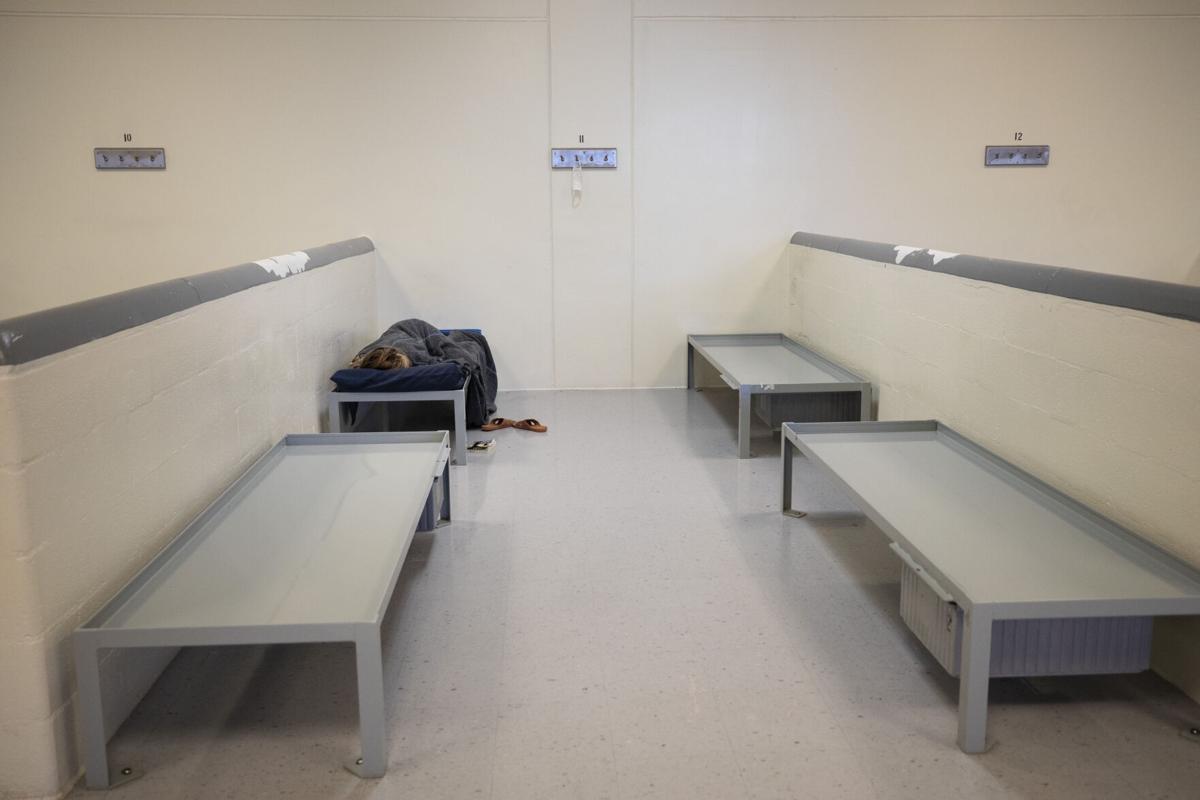 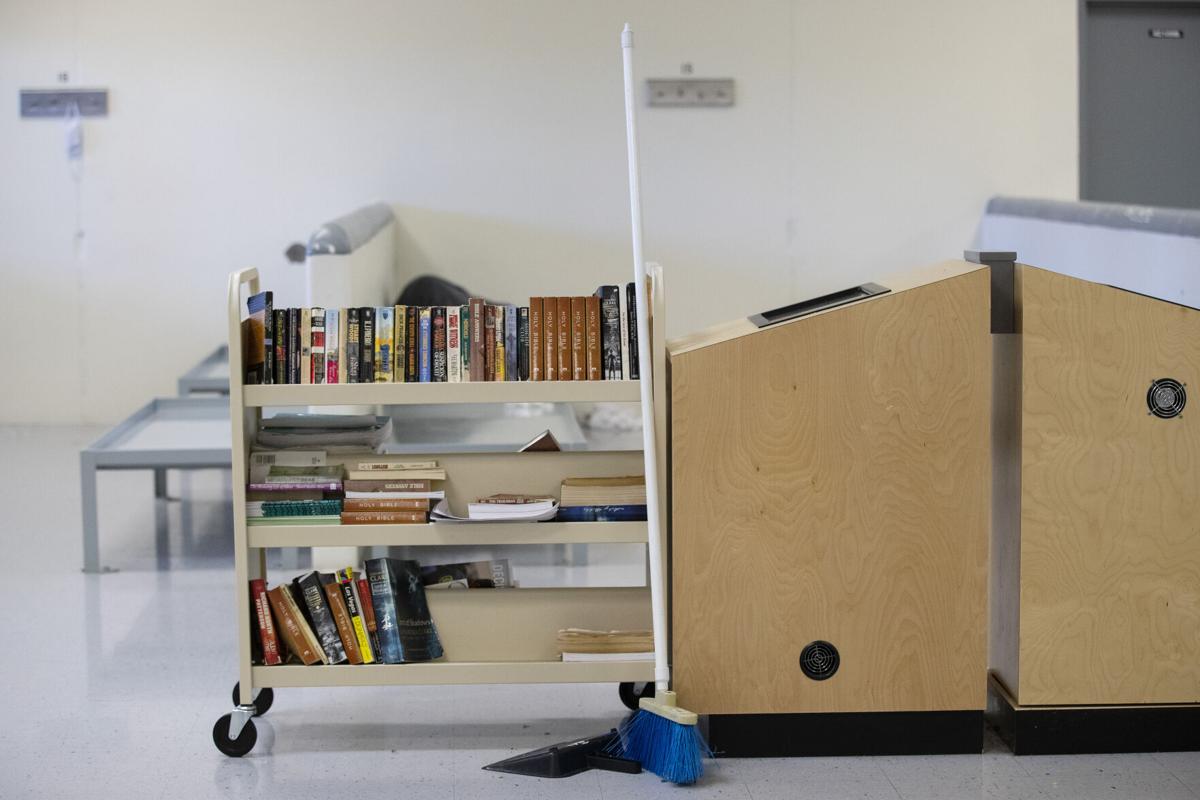 A cart of library books is available to juveniles while they are temporarily housed on a floor of the Sheriff Al Cannon Detention Center in North Charleston on Monday, Sept. 14, 2020. Lauren Petracca/Staff 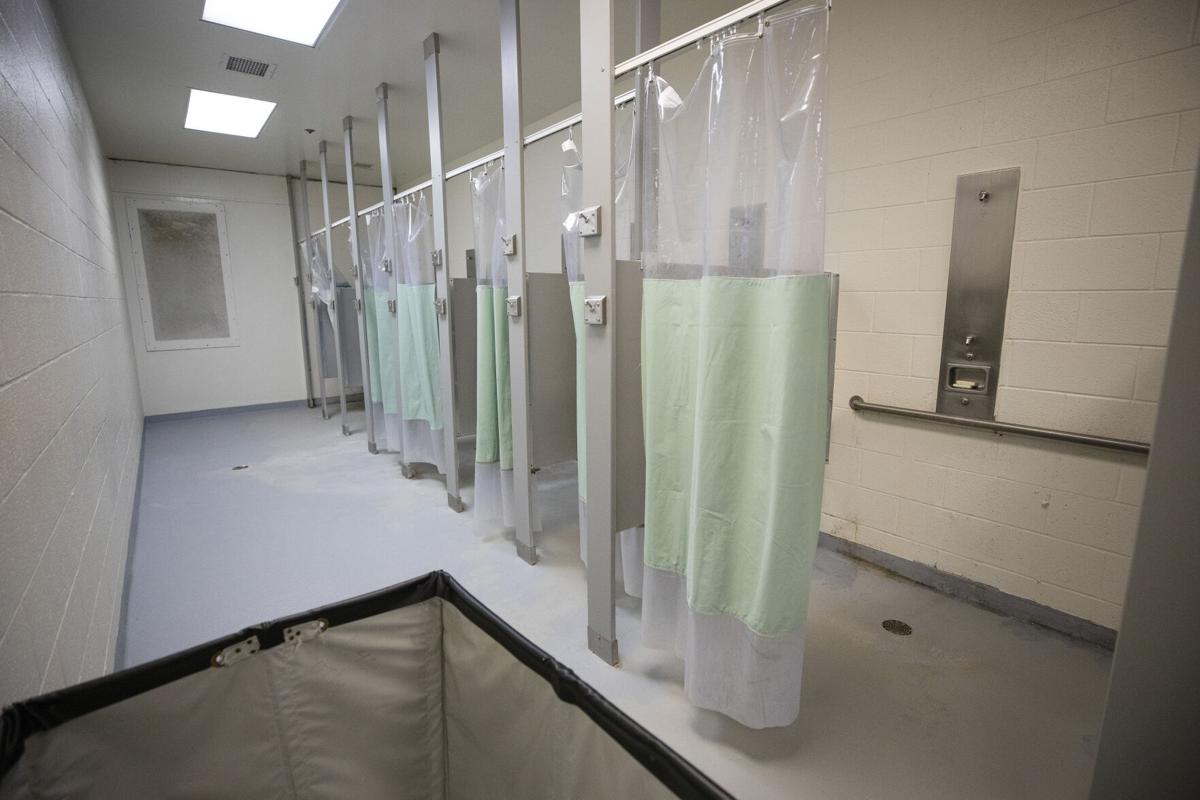 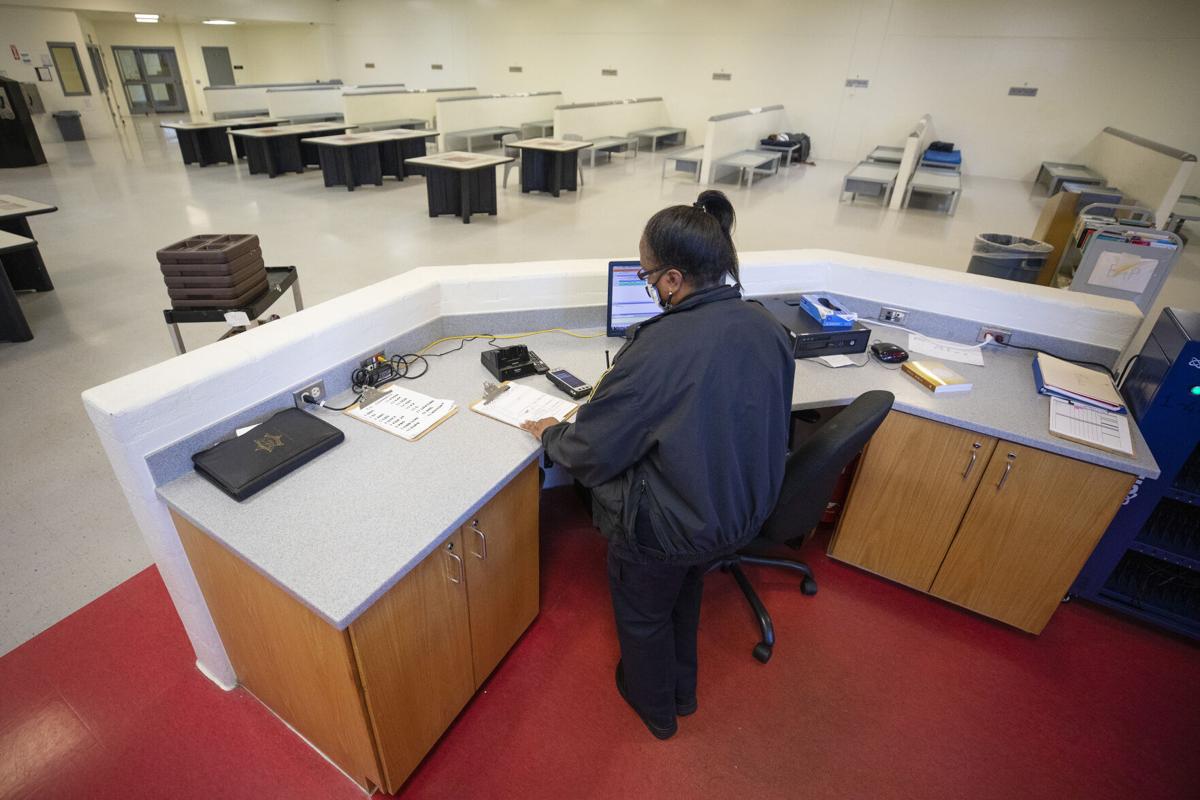 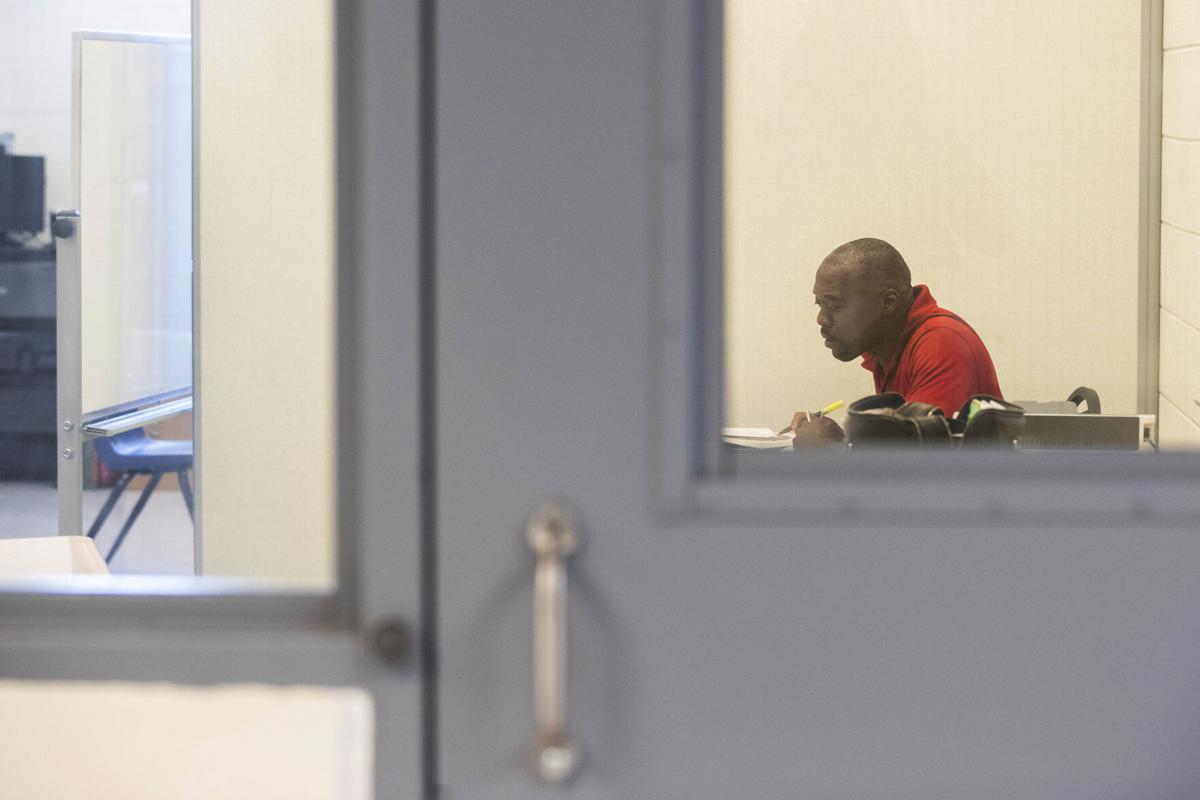 Albert Greg, a Charleston County School District teacher who works with juveniles in detention, goes over paperwork in a multipurpose room at the Sheriff Al Cannon Detention Center in North Charleston on Monday, Sept. 14, 2020. Lauren Petracca/Staff

It's been just over a month since the Charleston County juvenile lockup was shuttered and the children held there moved to the county's adult jail. Though its doors are closed, the fight over its conditions and culture, termed "medieval" in an advocacy group's lawsuit, hasn't ended.

In July, the advocacy group sued the Charleston County Sheriff's Office and the county school district, accusing them in federal court of traumatizing the children in their care through practices such as excessive isolation. The group's lawyers asked the court for an injunction to force officials to drastically improve conditions for the children. In recent filings, they said moving the children isn't enough.

On Monday, the Department of Justice filed a statement with the court stating conditions similar to those alleged in the lawsuit have been found unconstitutional by other courts. The statement says the federal government has investigated, and worked to remedy, other isolation practices much like those mentioned in the lawsuit. 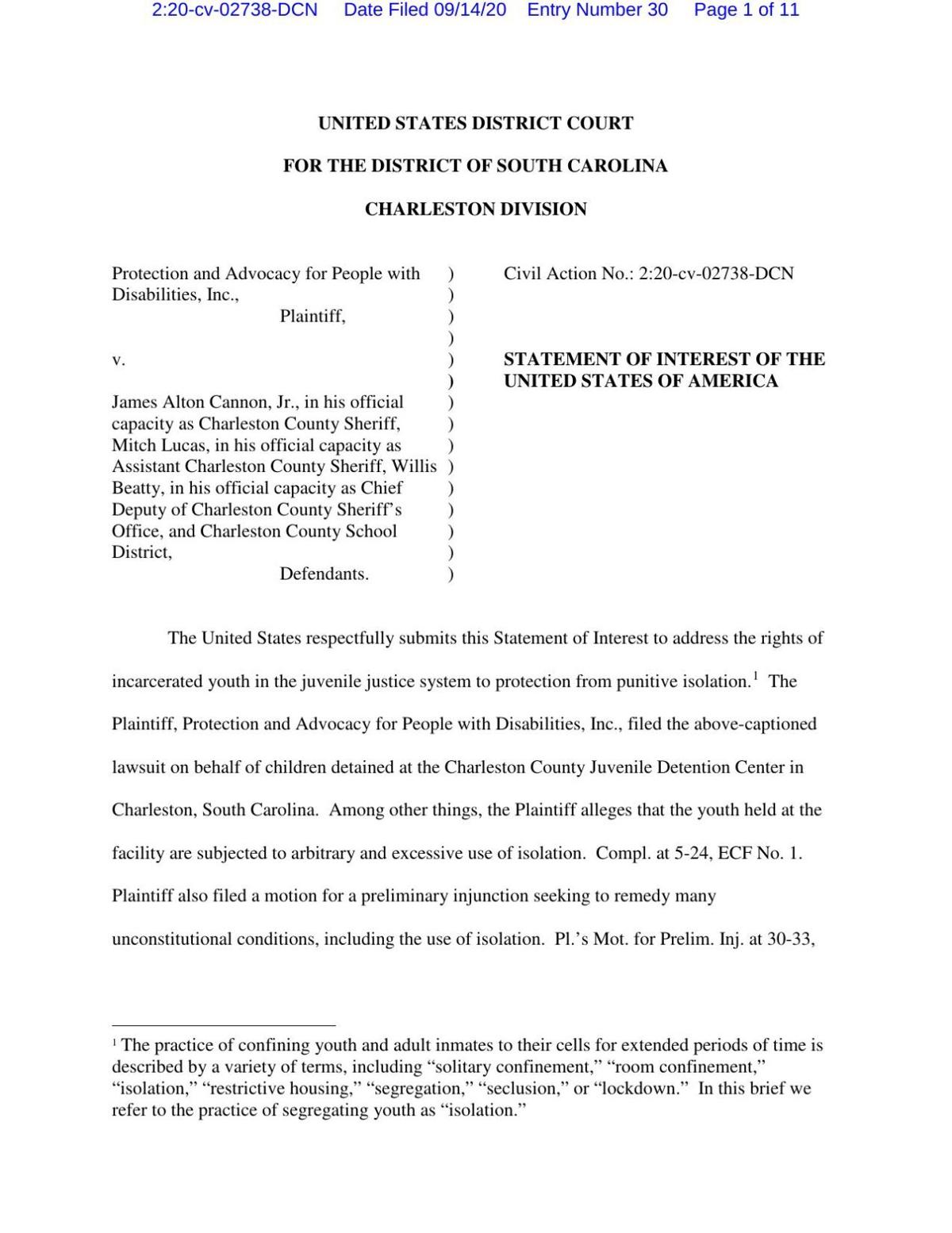 "Plaintiffs allege that the routine, lengthy isolation of youth at Charleston County Juvenile Detention Center, as well as the use of the Center’s disciplinary isolation and 'wet cell,' violate the youths' Fourteenth Amendment right to Due Process," the statement by U.S. Attorney Peter M. McCoy Jr. and Eric S. Dreiband, assistant attorney general, Civil Rights Division, and other civil rights attorneys wrote. "The United States, through its authority to enforce the constitutional rights of incarcerated juveniles in the criminal and juvenile justice systems, has found that similar conditions violate the Constitution and has worked with jurisdictions to remedy such unconstitutional policies and practices."

The Sheriff's Office and school district have said the claims noted in the lawsuit are false and unfair because, among other issues, they were not told which juveniles had been affected by the stark conditions at the old detention center. They've asked a federal judge to dismiss the suit.

Prior to the lawsuit's filing in July, The Post and Courier published an investigation of the juvenile lockup. The paper found in its March report that children ages 11 to 16 — none of them convicted of a crime — often spent up to 24 hours a day in cramped cells with little time for recreation and virtually no time outdoors or for education.

In early August, partly in response to the lawsuit, the Sheriff's Office moved the juveniles housed at the facility to the fourth floor of the Sheriff Al Cannon Detention Center — Charleston County's adult jail.

Rather than individual cells, the juvenile unit has an open-living plan, and a motion filed in the case says the children now have access to the outdoors "all day" except for when they're in school. It's far more spacious, and juveniles have told attorneys before that they far prefer the recently built adult jail to the juvenile facility, a rundown building with plumbing and roofing issues that was built in 1967.

The Sheriff's Office has since argued that by moving the juveniles from the contested facility, it has cleared up any issues that weren't already remedied in 2018 when officials said the Charleston Public Defender's Office first brought complaints to them. The Sheriff's Office has also said it plans to have a new juvenile facility built by October 2021, and therefore an injunction, which also was requested through the lawsuit, isn't warranted.

Attorneys for the plaintiffs have countered that it's the culture, not just the building, that needs to change.

In a motion filed Aug. 18, the Sheriff's Office, represented by the legal office of state Sen. Sandy Senn, R-Charleston, argues that Protection and Advocacy for People with Disabilities, which filed the suit, doesn't have the standing to sue Cannon and the others, either as an organization or on behalf of the juveniles. Since those children haven't sued or chosen to pursue administrative remedies on their own, the August filing claims, the suit should be dismissed.

The response also challenged the way attorneys for the group that initiated the lawsuit are providing evidence. The lawsuit mentions interviewing dozens of children who were incarcerated at the facility but whose names were kept anonymous.

Other papers, filed Sept. 8, refer to those interviews as "hearsay testimony" that will be filtered through expert witnesses. That doesn't allow the juveniles to be questioned by the defendants or for their stories to be individually proved or disproved, the papers said.

"These kinds of egregious accusations have no basis in fact, yet Plaintiff seeks to restrict Defendants from cross-examining these accusers," the court motion claims. The papers argue that if the Sheriff's Office defendants had been given the identities of the juveniles interviewed, they could have investigated their claims and avoided the lawsuit's filing.

The motion claims the suit's filing was political, intended to be "a public black-eye for the sheriff" during his current election campaign.

Attorneys for the advocacy group responded that the organization did have standing to sue for the juveniles and that the suit wasn't challenging the provision of services for each individual, but rather the "widespread and systemic" failure to provide services for juveniles as a whole. Individualized proof therefore isn't necessary, claims the response, filed Sept. 1. 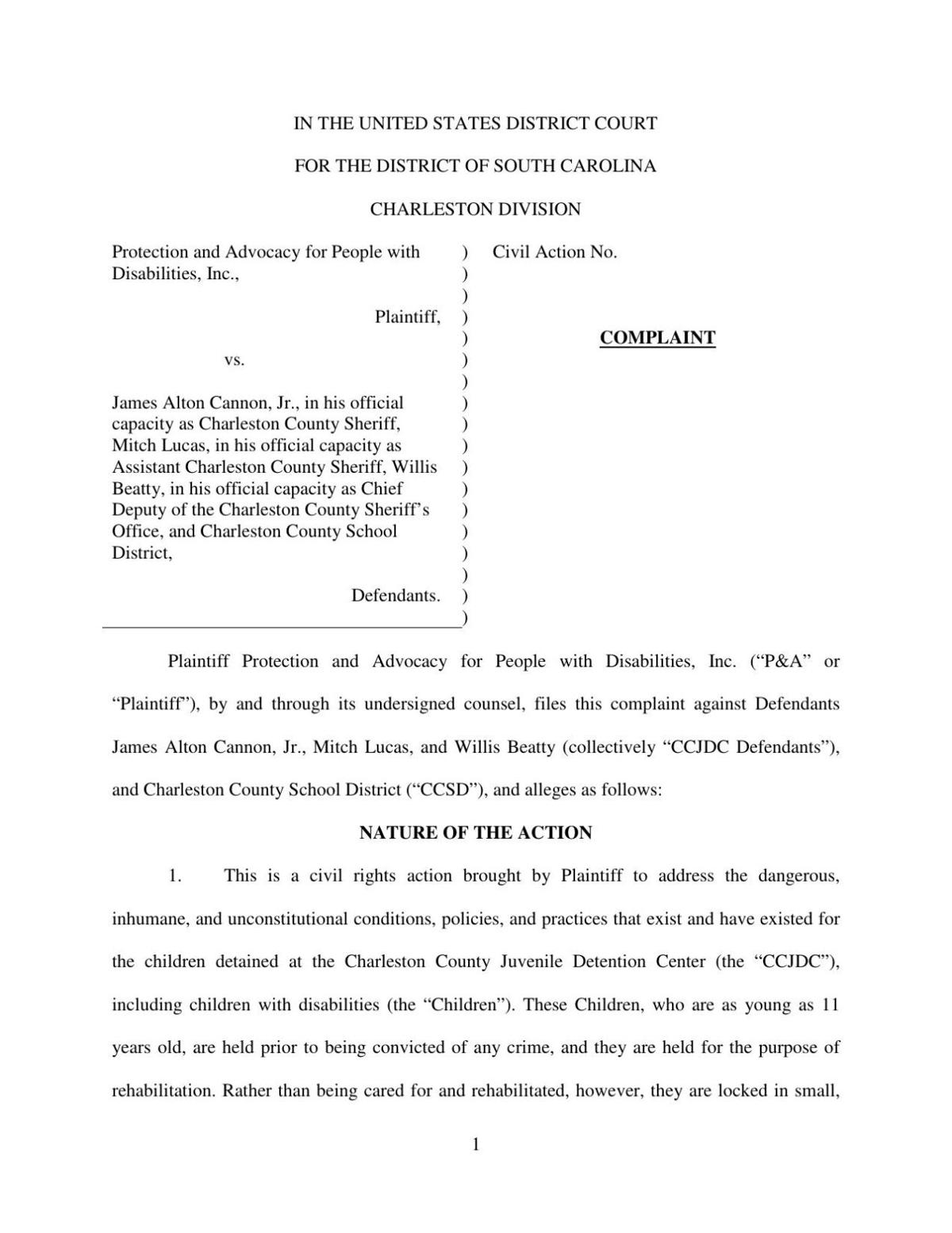 Exhausting all administrative remedies before filing wasn't necessary or possible, the motion contends, because the legal action was meant to prevent serious imminent harm to juveniles, some of whom are mentally ill.

"This is a set up, plain and simple," Senn wrote to an attorney with Nelson Mullins on July 24, the day before the lawsuit was first filed.

She nicknamed one of the attorneys for the suit "Selfless Annie," writing, "If you and Selfless Annie truly just want the 'children' such as those who killed the Provost’s husband on King Street not to 'suffer' despite our assurances that they are not suffering, then the quick remedy is a mediation without a media blow up."

The email references the fatal shooting of Tom DiLorenzo on July 17 in downtown Charleston, of which three juveniles stand accused.

Emailed responses from a Nelson Mullins attorney deny that anyone on that team has connections to the sheriff's race, and say attorneys aren't interested in politics or "conspiracy theories," according to a July 24 email.

The Charleston County School District also challenged the lawsuit, saying the secondhand accounts given by the anonymous juveniles don't show a "system-wide policy of denying, or conscious neglect of, students' educational rights or discrimination based on disability."

The school district's court filing argues that the educational program at the detention center is comprehensive, including a principal and certified regular education, special education and physical education teachers, along with a guidance counselor and parent advocate.

In a July 22 email, an attorney for the school district wrote to the plaintiff's attorneys, saying, "CCSD would welcome the opportunity to be able to better serve the children at the detention center. We have been met with constant challenges to the point of impossibility at times."

The original lawsuit alleged that children detained at the facility are not provided with age-appropriate education or the necessary number of adequately trained instructors, particularly for special education. Many children only receive a few hours of school a week, or none, rather than the state-mandated 30 hours, the suit claims.

According to papers filed Sept. 9, children in detention started the new school year Sept. 8 and each juvenile has a tablet to use for games, classes and communication.

An advocacy group hopes that a federal court judge will grant a preliminary injunction, filed on Saturday, July 25, that would protect childre…