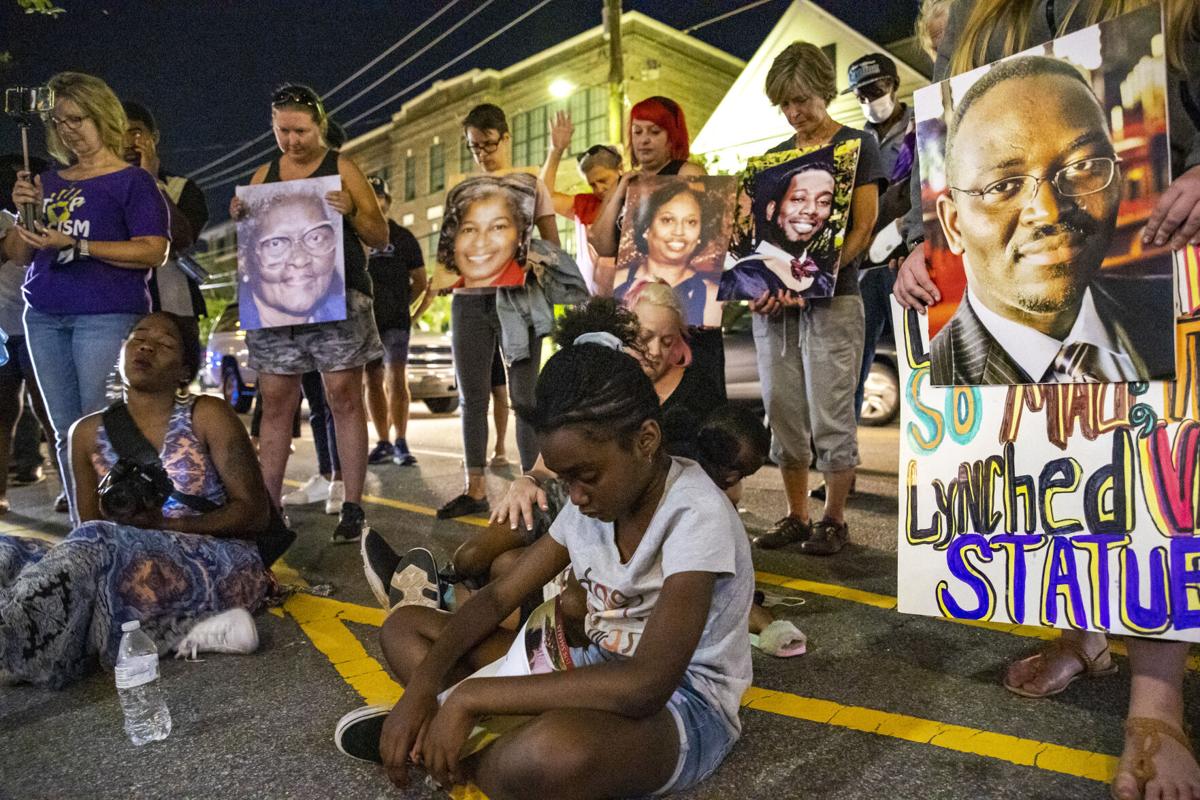 Community members gather fro prayer during a vigil on the sixth-year anniversary of the Mother Emanuel shooting on Thursday, June 17, 2021 in downtown Charleston. Andrew J. Whitaker/Staff 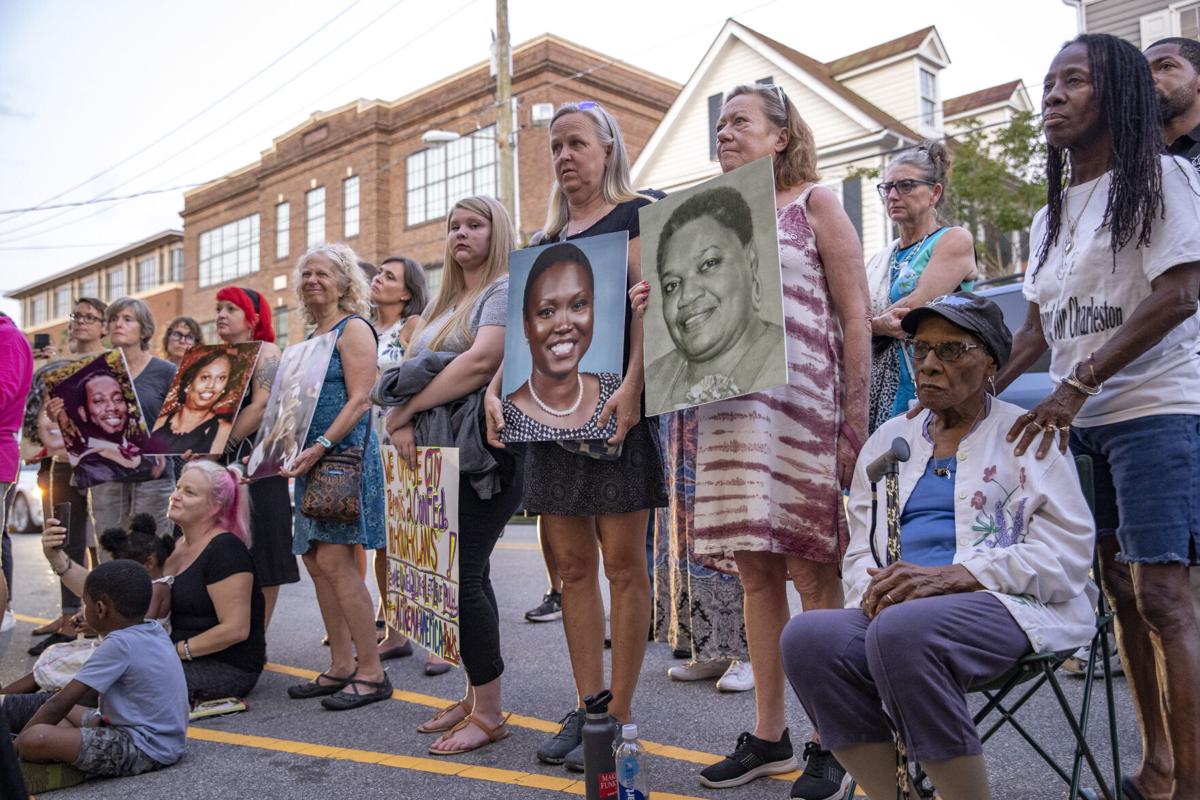 Community members gather during a vigil on the sixth-year anniversary of the Emanuel AME Church shooting on June 17, 2021 in downtown Charleston. Andrew J. Whitaker/Staff 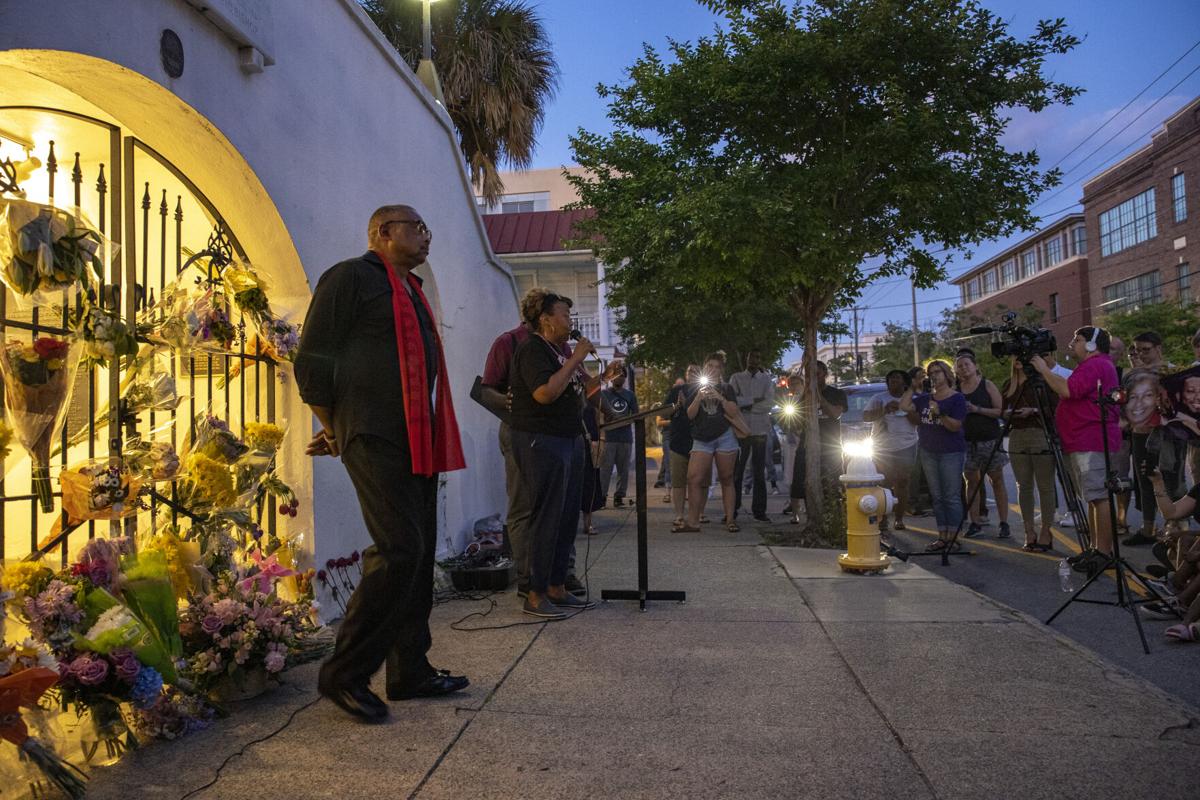 Marlena Davis, an Emanuel AME Church member, speaks during a vigil on the sixth-year anniversary of the Emanuel shooting on June 17, 2021 in downtown Charleston. Andrew J. Whitaker/Staff 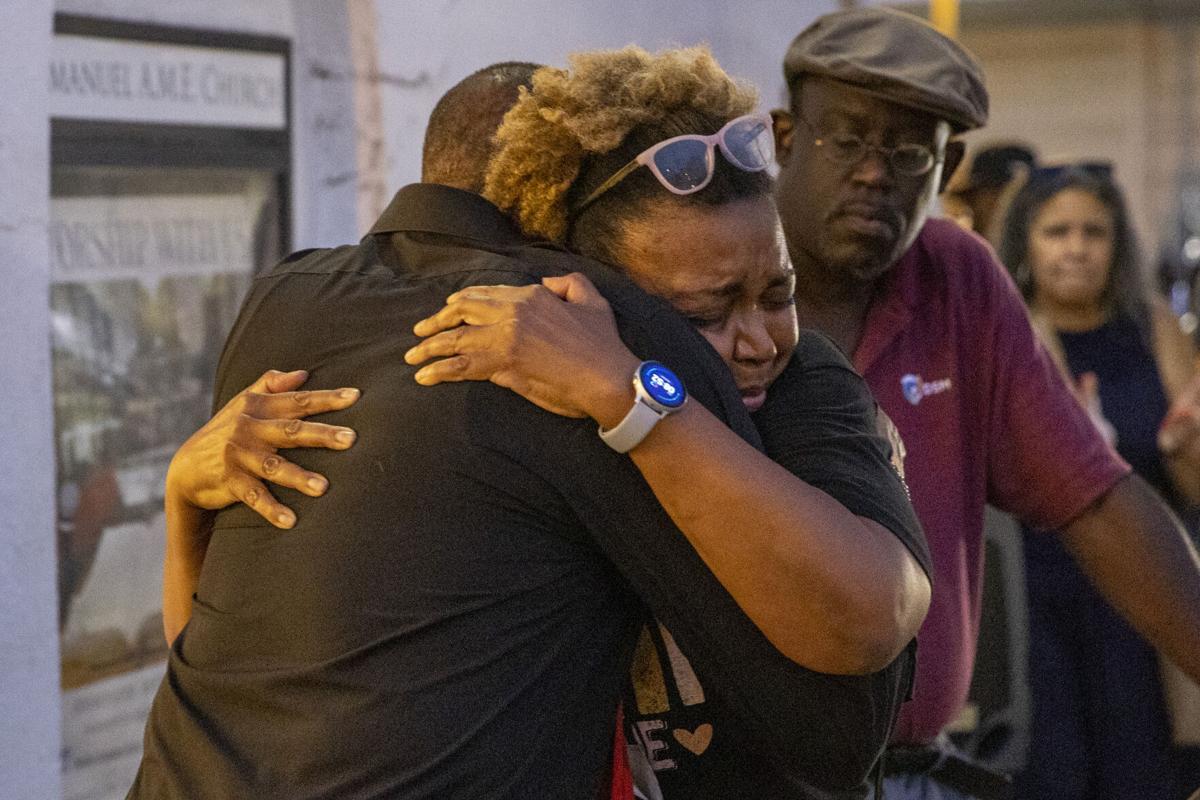 Community members gather fro prayer during a vigil on the sixth-year anniversary of the Mother Emanuel shooting on Thursday, June 17, 2021 in downtown Charleston. Andrew J. Whitaker/Staff

Community members gather during a vigil on the sixth-year anniversary of the Emanuel AME Church shooting on June 17, 2021 in downtown Charleston. Andrew J. Whitaker/Staff

The bells tolled at 9 p.m. in downtown Charleston and the crowd stood in silence as they listened to the pastor dressed in black read nine names.

At least 50 people gathered at 8 p.m. on June 17 in front of Emanuel AME Church on Calhoun Street to remember those names, marking the sixth anniversary of the racially motivated mass shooting that continues to scar the Black community.

"I'm so grateful that you are here to remember," said Marlena Davis, a church member.

The pastor, Thomas Dixon, opened the vigil with a prayer for unity.

"We saw the ramifications of what hate causes," Dixon said. "We've been challenged to overcome that hate with good."

He invited Damon Fordham, a history professor at The Citadel, to speak about the role Emanuel AME Church has played in the community.

Emanuel has been a symbol of freedom and of Black resilience with deep ties to the Civil Rights movement, Fordham said.

"It's important to remember the history of resilience," he said.

For many present, the need for outspoken activism was as strong as ever.

Davis pointed to groups that continue to fly Confederate battle flags at the Battery on Sundays, the same flag, she said, that the church shooter worshiped.

"It's beyond an insult," she said. "We've got to get out there and put our boots on the ground and make some good trouble."

Others expressed disappointment at the public rhetoric around the church shooting, saying the city made an initial show of unity before returning to business as usual.

A bridge to peace and unity Following the Emanuel AME Church killings, a crowd of thousands used bridge to send message

"I'm very disappointed with Charleston," said Christopher Cason, who is better known as Papa Smurf. "Charleston turned its back. Y'all need to face up to what y'all been doing."

They pointed in particular to an event on June 21, 2015, days after the shooting.

Thousands of people turned up for the Bridge to Peace and Unity Chain, which saw crowds of people holding hands span the entire length of the Arthur Ravenel Jr. Bridge in a show of unity and peace that gained national attention.

At a time when other cities rioted, Charleston stayed peaceful.

But for Dixon, Cason and others, the real story of how Charleston was saved from further violence in the wake of the Emanuel shooting hasn't been fully told.

It was Black community leaders like S.C. Rep. Wendell Gilliard, Elder James Johnson, Tory Fields and others who kept the community from rioting, they said.

Despite the frustration the overwhelming message on June 17 was that the city still needs to come together.

"Let me know that you believe in a better way," Dixon said, in his opening prayer. "We're all we got. The more we love together, the better off we'll be as a community."

As they spoke, a group of women stood behind the gathered crowd holding signs, including of nine people, nine victims, nine lives who've forever changed Charleston.

Community members gather during a vigil on the sixth-year anniversary of the Mother Emanuel shooting on Thursday, June 17, 2021 in downtown Ch…